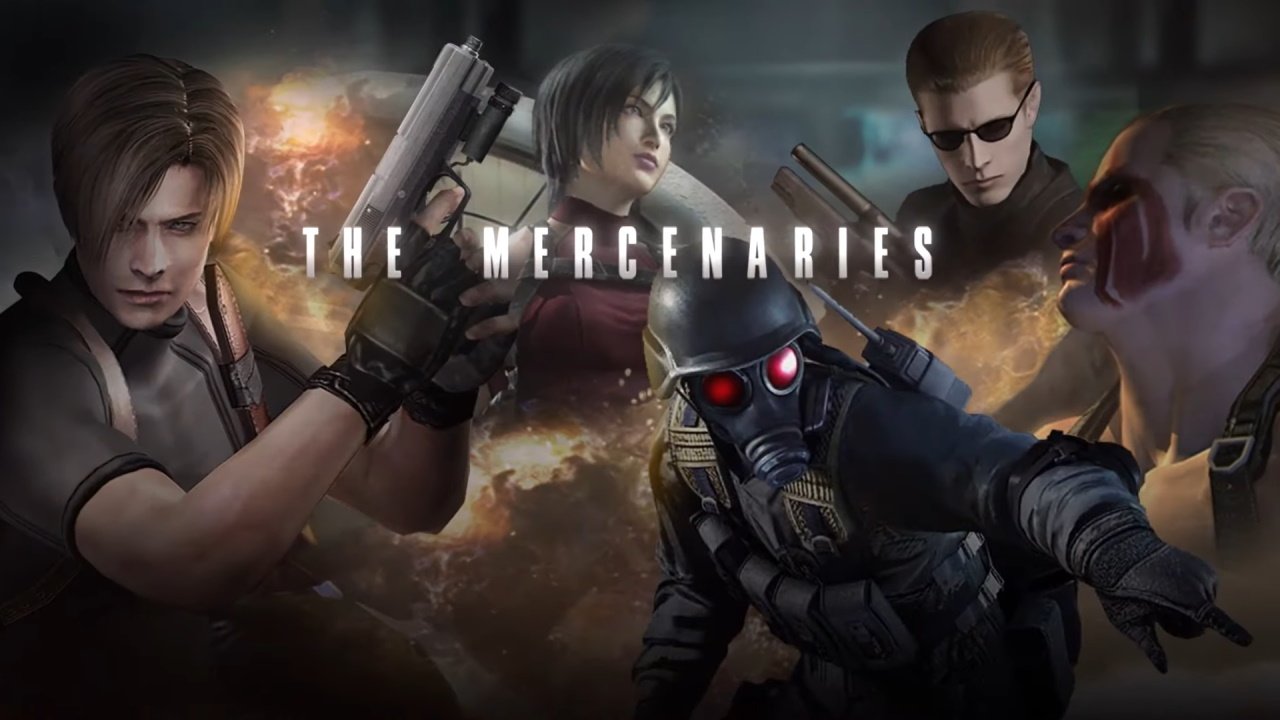 It’s been about half a year since the release of the, quite frankly, nigh-perfect Resident Evil 4 VR for Quest 2. I’ve since put tons of additional hours into it after finishing my review, and it continues to be one of the best VR adventures around, not to mention quite possibly the best official remaster of any Resident Evil game to date. If there was any one genuine knock that could be made against it (aside from some very clunky censorship) it would be that it wasn’t feature complete. To be clear, the base package of just Resident Evil 4‘s original campaign but fully supported in VR is far and away worth it, it’s just a fact that it is missing the additional content from every other release of this classic. Well, that’s partially been taken care of now thanks to the release of The Mercenaries as a free DLC update!

Just like the main campaign, The Mercenaries is the original classic mode from 2005 (complete with all five characters and four maps) rebuilt entirely for VR. While it would’ve been easy enough to just leave it at that, the team at Armature and Oculus Studios have gone above and beyond yet again to not only deliver one of the richest takes on the mode since 2011’s The Mercenaries 3D, but to offer a tremendous amount of brand new content never before seen in Resident Evil 4. I shouldn’t get ahead of myself though. 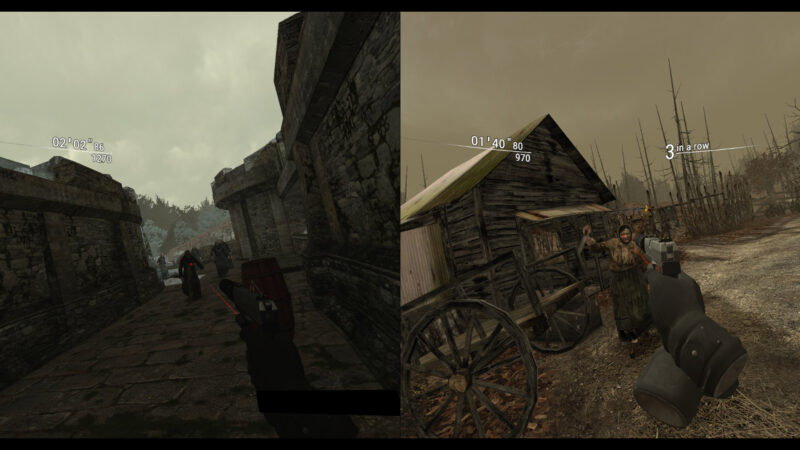 If you’re unfamiliar, The Mercenaries is perhaps Resident Evil‘s best-known bonus mode, included in some form in almost every numbered release in the series, and even taking on a life of its own in a few mobile/handheld spin-offs. Selecting a Resident Evil hero or villain (each featuring a unique weapon set and melee moves) you’re tasked with surviving an endless horde of enemies against a limited timer. Chaining together kills multiplies your score, and bonus time can be found across the map to give you more breathing room to kill. It’s fun and exhilarating, and following up on the objectively misnomered version in Resident Evil Village, it was an absolute joy to return to these classic rules in VR.

This version features Leon, Ada, and Krauser from the campaign, as well as two guest characters: HUNK (from Resident Evil 2) and Albert Wesker, and they’ve all been translated to VR with their own charming little design quirks to make them recognizable. Since we inherently don’t have a body in VR, the devs have gone the extra mile and (along with the character’s hands, obviously) given each a unique HUD watch, each with a slightly different design and color scheme to match the character’s personality and costume pallet, as well as unique knives. You can, of course, still see your favorite characters when they deliver a melee attack, so your character isn’t totally invisible. 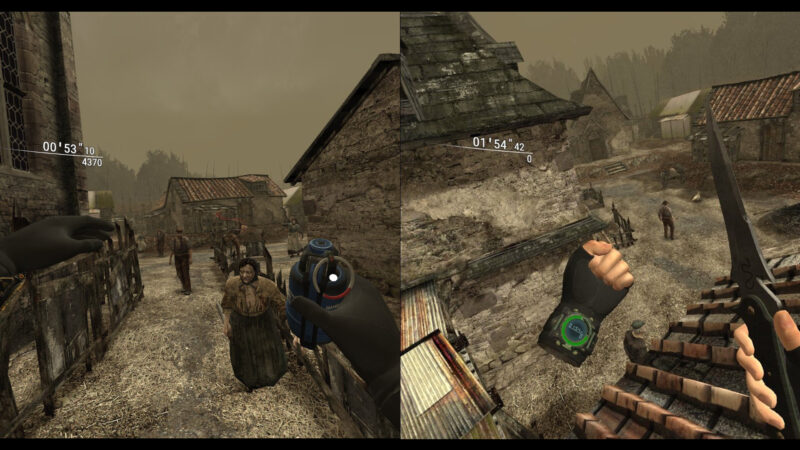 Something I was extremely surprised by as a veteran of Resident Evil 4‘s Mercs specifically was just how fast this feels. Mercs has always been a faster mode than campaign, of course, but this was on a whole ‘nother level. The ability to move and shoot already changed up the main game’s meta quite a bit, but thanks to the constantly respawning enemies you’ll be positively racing around the map now, delivering death at every corner. It’s so incredibly exhilarating, and it makes you feel like a total badass. Playing with HUNK especially, who only has a TMP (RE4‘s lone automatic weapon by default), started to make me feel like the Terminator, moving from room to room and systematically blowing Ganado away while one-handing the TMP. All of this was increased tenfold thanks to the new modes added to this VR version.

You see, on top of the original version of The Mercenaries, RE4VR has also added a treasure trove of new Mercenaries modes that change up the rules, force strange weapon sets, and more. This is the most robust take on rule modifiers The Mercenaries has ever had, and some of them are impressively challenging. From a modifier that blankets the map in a thick fog that greatly reduces visibility to one that forces you to use dual Broken Butterfly magnums like you’re Revolver Ocelot (I see what he meant about the exhilaration of reloading in the heat of battle) and many more that weren’t part of the DLC’s trailer, but I’ll let you discover those for yourself. Suffice it to say, they’re super fun, challenging, and on occasion, hella goofy. 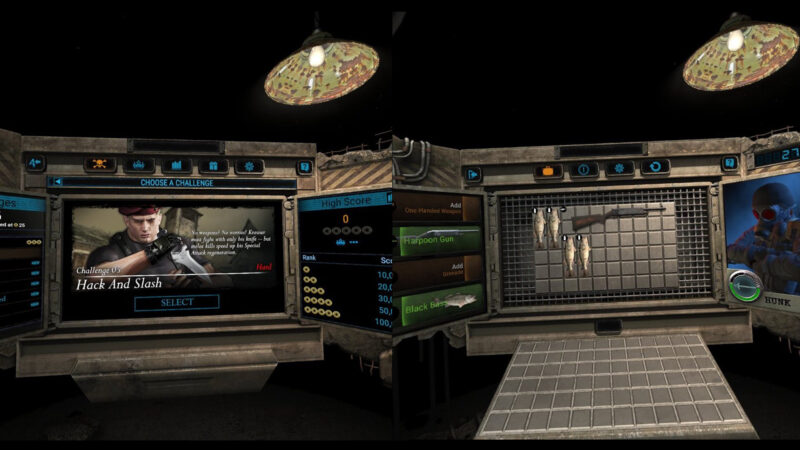 Clearing these new modes with higher scores not only unlocks more modes, but also content for the main game as well, a lot of which is brand new (it does add in Leon and Ashley’s PS2 costumes along with the Chicago Typewriter and other bonuses) which as a long time Resident Evil 4 fan is just amazing to actually have new content added to a game I love so, so much. It’s really incredible just how much this seemingly smaller scale (and free) DLC adds to an already excellent package.

As a side note, these new modes also incorporate alternate versions of the maps, such as new daytime/nighttime versions. This technically isn’t completely new, as things like The Castle during the daytime previously appeared in The Mercenaries 3D, but it’s still rad regardless.

If RE4VR was already a killer app for the Quest 2, it’s now become a straight-up “you need to own this if you own a Quest 2″ title. The Mercenaries is fun all on its own regardless of its attachment to Resident Evil 4 or the brand as a whole and is worth checking out just for it. There are hours upon hours of fun here, and I can tell you with absolute confidence that I’ll be playing The Mercenaries in VR for quite a long while yet.