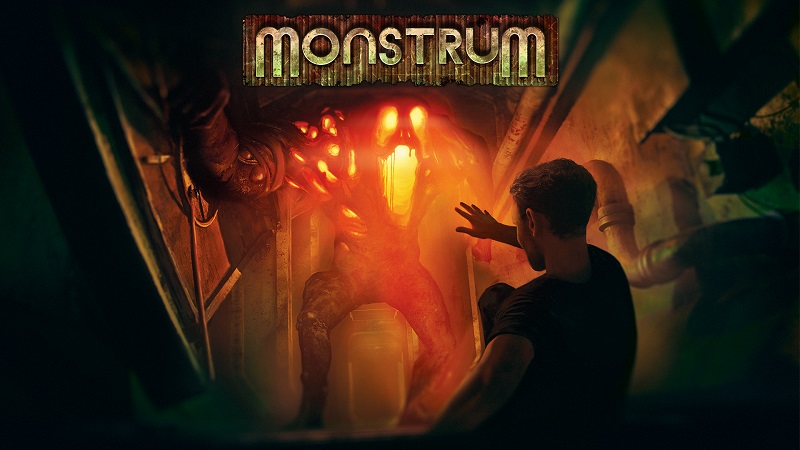 Sometimes the simplest ideas are the best. Simplicity keeps everything contained, with no complicated muddying of the core concept. It’s probably the reason why Deep Purple’s Smoke on the Water is one of the most recognised guitar riffs in history. Not one aspiring guitarist has been able to resist playing those easy chords in that opening bar. Likewise, developer Team Junkfish’s isolationist survival horror title Monstrum is another example of how the spark of a simple idea can take off and be executed successfully.

Some of you reading this may be scratching your heads and thinking “I’m sure I’ve heard of this game before. Didn’t it come out like, years ago? Why is it just being reviewed now?” Your curiosity is not without validation. Monstrum has indeed been around for a few years already. The original PC release was published back in 2015 to positive feedback. It gained notoriety for a short period when YouTube superstar Markiplier did several Let’s Play videos of it. That’s actually how I came to know and eventually play it. As a result, the game has since been released digitally and physically for the PlayStation 4 and Xbox One.

Originally developed at a time when the new wave of survival horror games were still reeling from the awesome power of Frictional Games’ Amnesia: The Dark Descent, Monstrum takes the formula one step further by introducing random generation to an already unsettling environment.

As the game starts, you wake up, having presumably been unconscious, to find yourself alone on an abandoned and rusting ship. Like a drunk that’s found themselves at the bottom of a ball pit, you feel an overwhelming need to escape. As you move through the corridors, you mentally begin to map out the layout of the ship; how many decks there are, what rooms have what items in them, which corridor leads where, etc.

You quickly discover three ways to get off the ship: a submarine, helicopter or an inflatable life raft. The only problem is they aren’t working. A set of objectives becomes available and it’s then that the goal of the game is revealed. Scattered throughout the ship are mission items and additional equipment you must collect in order to tick off the objectives for your chosen escape route. Of course, the game would be far too forgiving if that was the only thing going on.

While you search the bowels and cabin rooms of the ship searching for items, you begin to realize there is something else onboard with you. A monster of some description is stalking the halls, looking for potential interlopers. When you hear or see it, Monstrum rapidly transforms into a cat and mouse game. Because this is a modern survival horror game, you are unequipped to defeat the monster and must rely on running and hiding. Luckily, the game provides you with legs and plenty of hiding spots that you must use wisely. There are also security cameras that will alert the monster to your presence. Good luck with those. 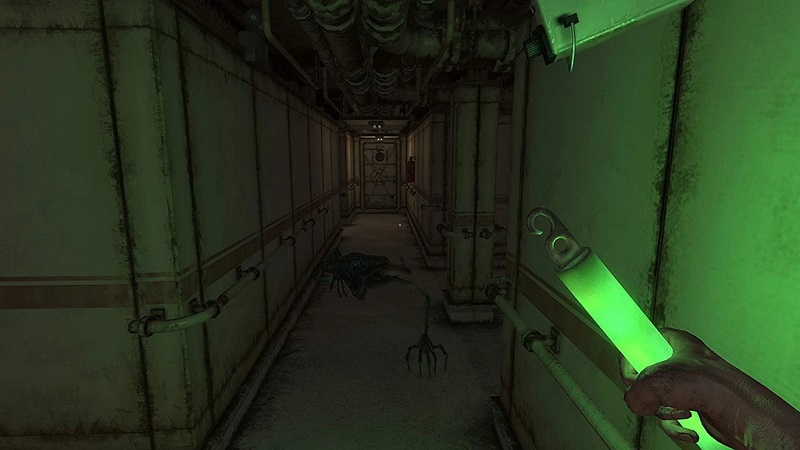 Choose an escape route, get all the items needed to fix or get it ready and don’t let the monster see or catch you. Doesn’t sound too hard, does it? This is where the game’s random generation really gives Monstrum a whole terrifying new edge. Each time you play the game, things change. You wake up in a different place. All the items you gathered in your last playthrough are now in completely different locations. The corridors have changed, so all that previous layout memorization won’t help you on your next playthrough.Even the monster could be something different. In fact, the only thing that remains consistent are the decks where the submarine, helicopter and life raft are.

I’m calling Monstrum survival horror, but there’s another element which I feel many other horror games don’t cover: strategy. You have limited inventory space and as such, it becomes a trial run as you pick up and discard items depending on how much you feel you need them. Say you’re partway through and you happen upon the helicopter. Great. Now you know where it is, so now you just need the objective items for it. But wait, you also have one of the items for the life raft. Now you have a choice to make. Do you abandon this item in favor of the helicopter? Do you leave the helicopter alone because you don’t have any of the items for it? But now you need to know where the raft is. You could clear your inventory of unnecessary items, but you want to keep the flashlight, and you never know where you might need the fuse. It’s the horror game equivalent of “Do you want soup or salad as your starter?” 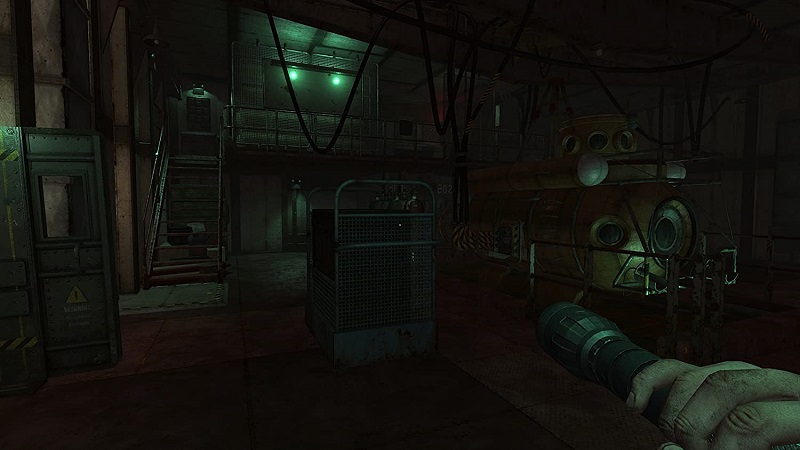 After a few attempts, you’ll gain a better understanding of the general layout, even if the corridors and rooms change, and you begin to tactically strategize more effectively overall. You begin to think “OK, I’m on this deck. I know how close I am to [x], so I can make a start finding the items for that.” But some items require more skill in obtaining. You may come across doors you can’t unlock, which require another mode of access that could attract the monster. Do you want that? Do you definitely need that important item you can see but can’t get? Is it worth rethinking your escape route? This is what Monstrum does. It forces the player to consider multiple options and backup plans.

In terms of story, it mostly takes a backseat. The uncertainty of where you are, how you got there, where the monster came from or even who you are is in keeping with the horror of the mystery. There isn’t much in the way of a concrete narrative. You can piece together aspects of the story from scattered logs and diary entries, as is the standard for horror games, but the entries don’t provide much useful information in terms of survival. They do provide a way for players to contextualize their situation and help breathe some life into the game’s universe. 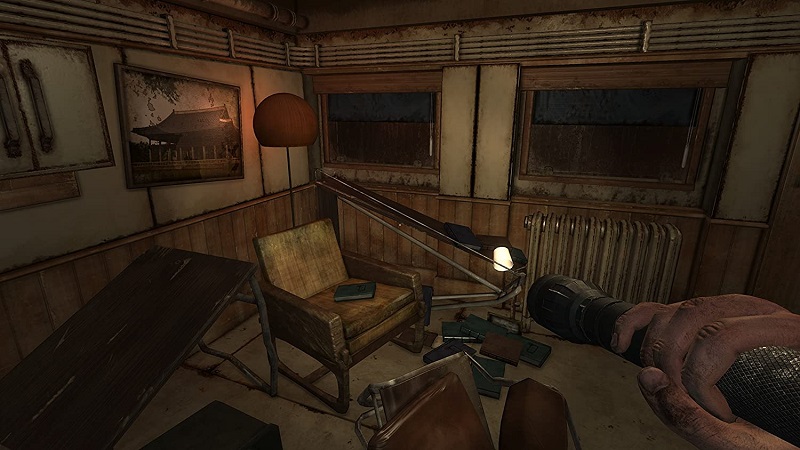 As this is a console port of a game developed by a small team more than five years ago, aesthetically it’s not going to sit up there with the likes of Resident Evil 7, but what it lacks in visual polish, it makes up for in detail. There’s a lot of love that has gone into creating a believable ship that feels isolated and claustrophobic. Additionally, Monstrum doesn’t rely on cheap scares. The knowledge of being stalked and not knowing where the enemy is, and the use of ambience and environmental sounds (the waves hitting the ship, the creaking, etc.) is enough to create a tense atmosphere. It does, however, become less scary over time. While being chased down a narrow corridor as you frantically search for a room to hide in is edge-of-your-seat stuff, these moments are offset by the much more pragmatic approach to trying to escape. Sometimes it feels like the monster is just a nuisance that gets in the way.

There is one major issue I have with the game, and that’s the drops in framerate. This could be down to the way it’s been ported to console, but when you’re trying to close and lock a door behind you whilst a monster is in pursuit, it can feel like you’re fighting with the game itself when your movements and actions freeze for a second. It adds to the tension, but not in a way that benefits the gameplay, and it’s something that can make or break a playthrough. 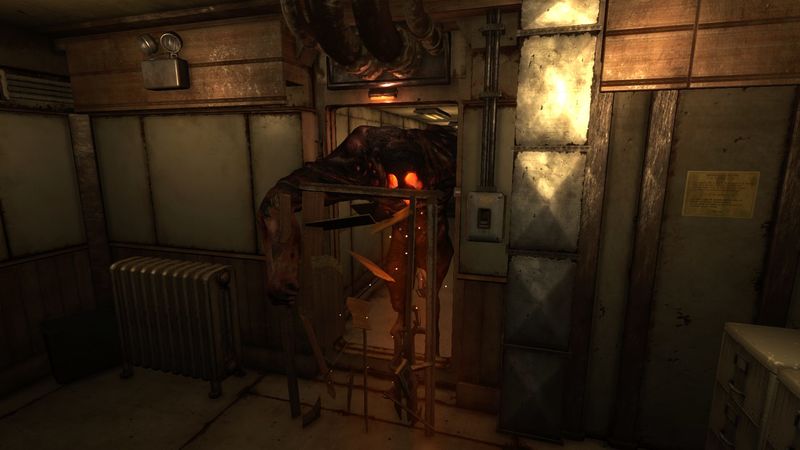 While Monstrum is a great horror game with a simple premise, where it absolutely shines is with its random generation. This is where the game enables a kind of addiction. I have been playing the Xbox One version for over a week now and each time I die, I am compelled to restart, telling myself, “Maybe the next time I’ll get lucky.” That’s where it all comes together: luck. Your next playthrough may be the one that places you close to one of the escape routes, or you’ll find all the items you need in quick succession, or the monster will spawn far away from you. It adds multiple layers of thought that go beyond the fear factor.

Monstrum is still quite scary and I suspect it may have taken inspiration from Alien Isolation (hiding in lockers, the monster programmed to hunt) and so, on the surface it functions as a really good horror experience. But it’s the planning of routes and frustration of not being able to find the items you need that really wraps the game up in a neat package. It’s not a finely-tuned game and it’s a shame about the framerate issues, but it’s a suitably stressful experience that keeps you coming back for more.