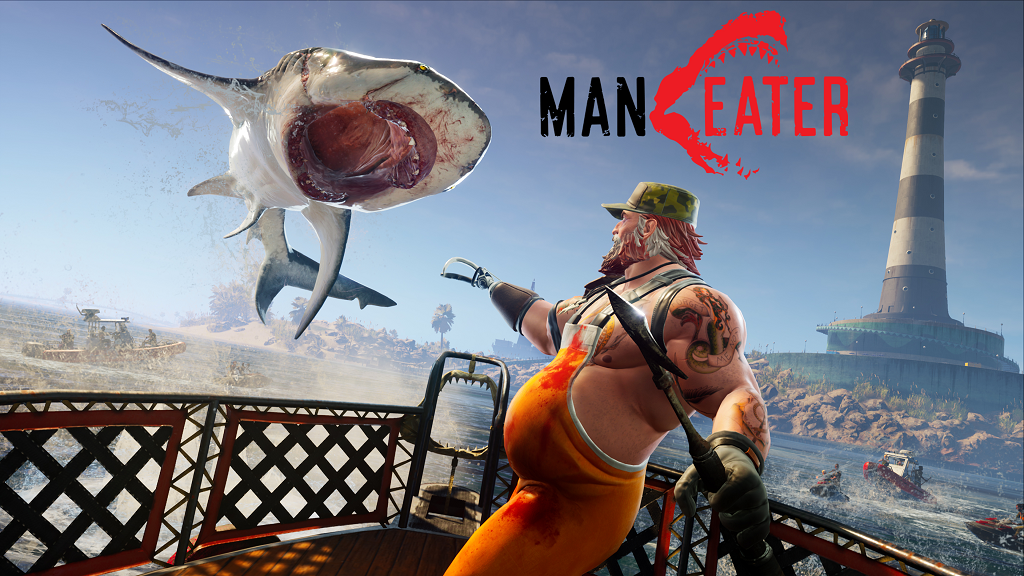 If you haven’t caught wind of it yet, Tripwire Interactive’s Maneater is a game attempting a number of firsts in the video game world, being the first “Shark RPG” — fusing elements of open-world action-RPGs with underwater exploration and combat.

Taking light inspiration from the poorly-received Jaws Unleashed from 2006 while fixing all the issues that plagued it and fleshing out all the good elements it had, Maneater attempts to breathe new life into the all-too-empty genre of games where you get to play as one of nature’s most infamous marine predators.

Does it succeed in this noble task? Let’s take a look and find out. 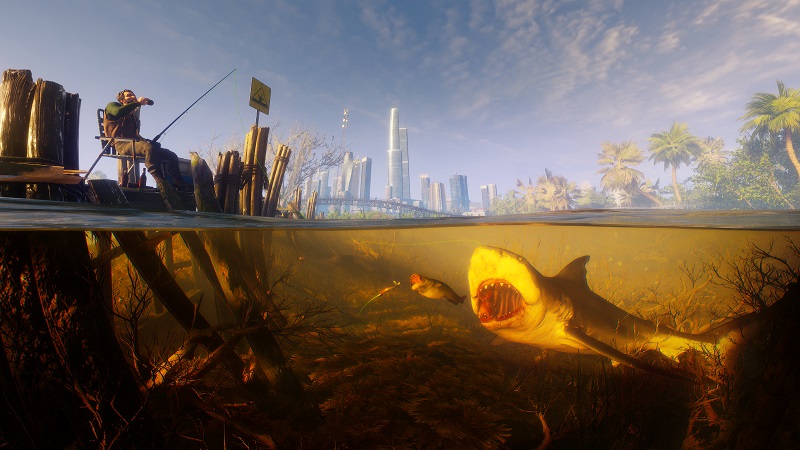 Maneater begins by putting you into the role of an adult Bull Shark. After going through a tutorial of the game’s controls and having some lunch (about a dozen humans), you end up getting caught by a famous shark hunter who’s also a reality TV star. Your encounter with this hunter ends with the unfortunate death of your shark, but also with new hope: the unborn baby inside your shark emerges and bites off the hand of the hunter as it escapes back into the water. Thus begins a journey of revenge against a clown of a reality TV hunter, where you must become strong enough to take down your mother’s killer for good.

The tone of Maneater is extremely comical, with the entire presentation and writing of the story and narration being packed full of biting criticism, sarcasm, and mockery of almost everything in our society. The topics poked fun at range from everything from ecology, world politics, reality TV, nature documentaries, animal rights — just about every social topic you could imagine. Maneater had me laughing out loud pretty regularly throughout my time with the game, making the experience that much more enjoyable when combined with the fantastic gameplay. 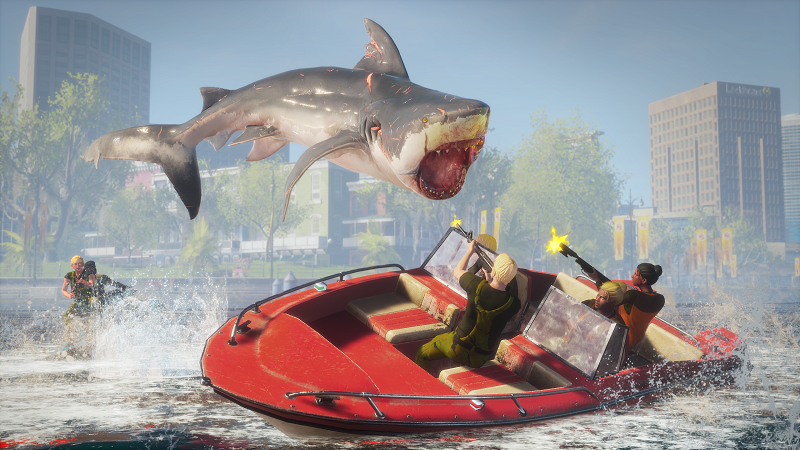 Speaking of the gameplay, Maneater plays and controls like a dream come true for anyone who’s ever wanted to explore the marine world from the perspective of the animals that inhabit it. The controls are tight, responsive, and fun, where even just swimming in circles feels exhilarating. Traversal as the shark is a blast, whether you’re under the water or above it, and both scenarios control and function quite differently.

Some objectives require you to be above water, and others below, as you’ll square off against various marine life, as well as humans on the surface, which includes boats, fishers, and all other kinds of people. No matter where your objectives lead you, exploring the world Tripwire Interactive has created always feels fresh and compelling.

When it comes to combat, Maneater does not disappoint, either. Every encounter, human or otherwise, is a thrill thanks to a fun combat system where you must actively track your prey no matter which direction they go. The arsenal of abilities at your disposal grows steadily as you level up and progress through the game by completing objectives. When going to combat against anything underwater that’s higher on the food chain than you are, fights take on a whole new challenge, becoming almost Souls-like, where there’s a finesse involved in dodging your enemies and attacking only while they are in a short window of vulnerability. Attacking stronger predators while they are not vulnerable can lead to a swift death in just one or two hits if you’re not careful, making each of these battles a tactical puzzle. 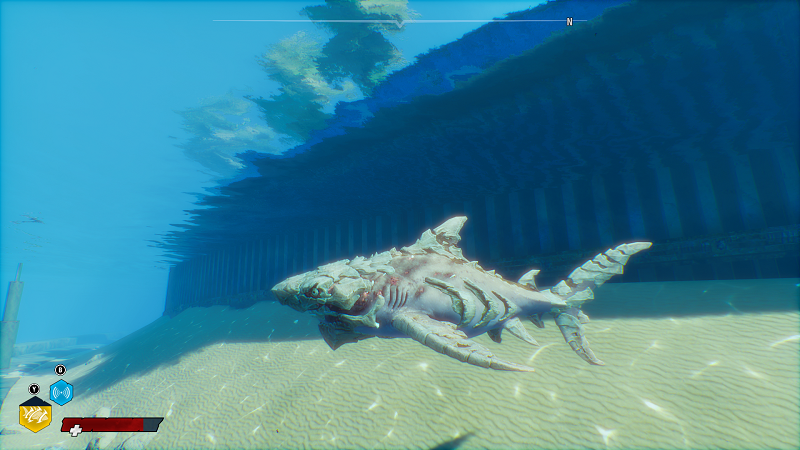 Along the way, your shark will get bigger, stronger, and have various abilities, which can not only help you in combat but also help you explore new areas you were not able to reach previously, similar to a “Metroidvania” style progression. Each evolution feels stronger and more capable, and every new ability gained makes being the shark feel fresh and even more fun to wield. These new abilities also help tremendously in combat, offering various options to equip certain abilities based on what your priorities are and what kind of objective you’re trying to accomplish. 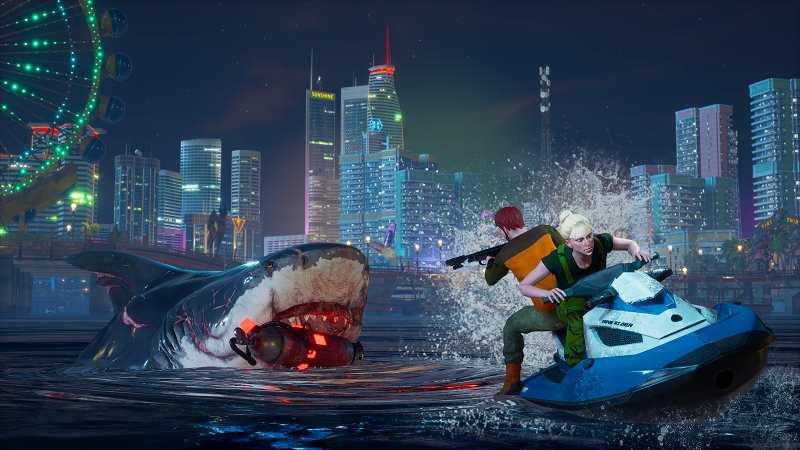 There’s even a Grand Theft Auto-style “infamy” system that continuously increases as you kill humans, making you more and more of a threat, leading human hunters to hunt you down. Hunters progressively become more aggressive and difficult as you progress, so you’ll also have to adjust your play style and tactics as they ramp up their assault.

In terms of upgrades and progression in Maneater, every aspect feels like it was handled perfectly, repeatedly leaving you wanting more and drip-feeding each new piece of content at a steady pace. The game ensures you aren’t overwhelmed with hundreds of objectives available right from the start and provides a steady motivation to keep pushing forward. There’s minimal menial grinding for XP or points, as the XP needed comes naturally and rarely requires you hunt random things just to increase your rank or level. Balance like this is rarely found so perfectly in open-world games, and I’m delighted the developers focused on this. 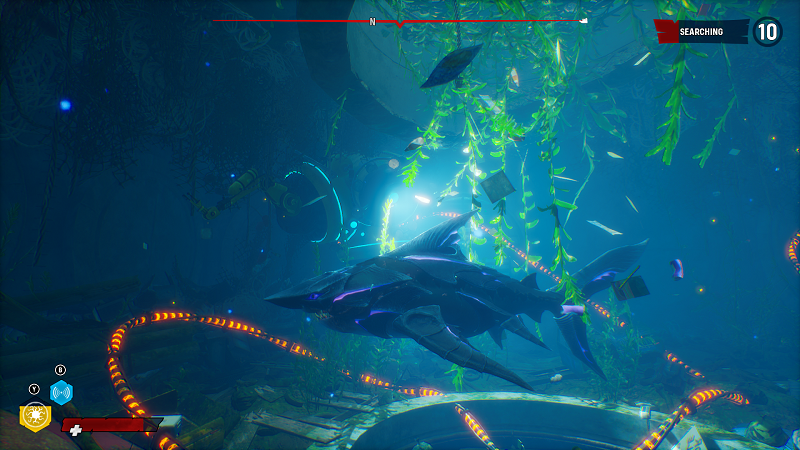 The upgrades are a complete joy to play with, and they also change the physical appearance of your shark, going from a baby all the way up to a mega-shark that’s about 30 feet long from head to tail. These upgrades and customizations nail home the progression, making you always feel like you’re improving and moving forward, which is precisely what these kinds of games should be doing.

As mentioned above, the shark’s changing physical appearance is just one element among a boatload of fantastic visual elements included in Maneater. Everything in the game looks pretty, smooth, vibrant, and very distinct, with an art style that fits right in between the lines of looking realistic enough to be immersive, but also stylized enough to be unique, eye-catching, and intriguing. 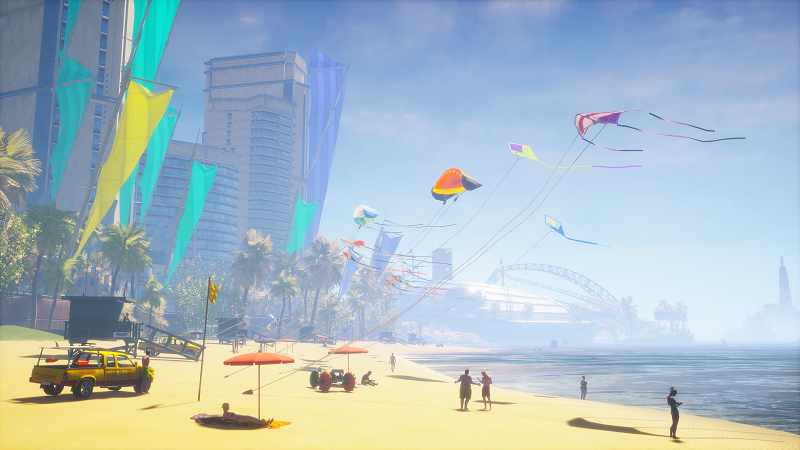 A lot of care was put into every visual aspect of the game, where many times open-world games tend to skimp on little details like NPCs or various things that you don’t see very often, but there is an acute eye for detail in the Maneater world. It also helps that the game runs very well on all kinds of hardware, maintaining high framerates and a great draw distance, even on the less capable base consoles on the market today.

There were almost no graphical glitches of any kind, and the game generally ran very well and with short load times, showing how optimized the technical side of things are. I did experience 2 or 3 crashes throughout my nearly 20 hours of gameplay, which will likely be patched as of launch time and did not affect my progress in any way, as the game is very diligent about autosaving after you complete any objective.

As much as the game can look beautiful, it also offers wonderful, visceral brutality in the combat encounters, where you feel every hit or every bite, and copious amounts of blood and gore splatter in every direction as you eviscerate your enemies. This gives a much-needed punch to make encounters feel satisfying and heightened from start to finish, as well as adding an extra layer of comedy and ridiculousness over the top of a game that fittingly does not take itself too seriously. 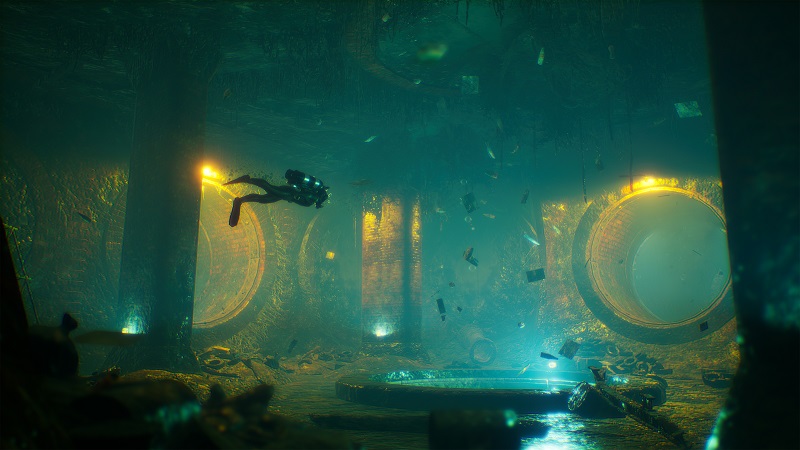 Aside from the visual splendor the game offers, the audio is right up there in top-notch design as well. The music is appropriately fitting for the situation at hand. Whether you’re just exploring the underwater areas — with mesmerizing and grandiose strings right out of a BBC nature documentary playing behind you — or combating one of the various hunter squads in the game, where things ramp up with an adrenaline-fueled rhythm. Many areas of the game also have a certain laid-back Southern twang that sounds right out of the bayou, and perfectly mimics the music you’ll usually hear in the various reality shows on the air today, which fits the American South setting of the game. The voice acting is also very well-done throughout, with not only the narrator (veteran comedian, Chris Parnell) nailing every single line in perfect mockery of the average Discovery Channel show but also other characters whose performances add tons of over-the-top personality to their lines. 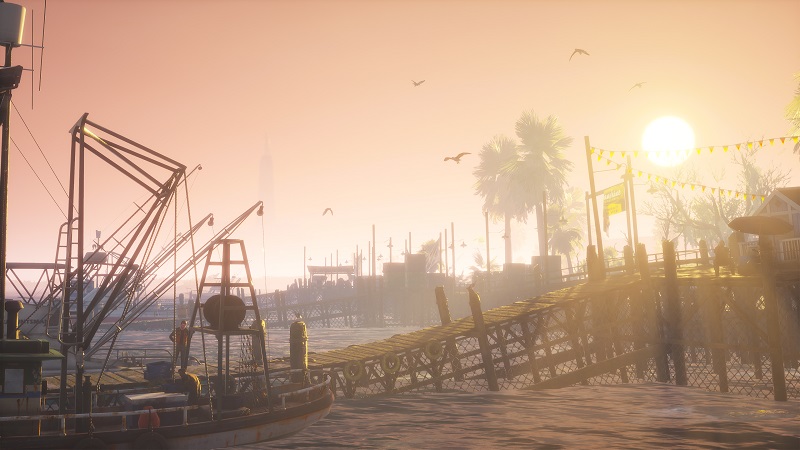 Maneater will take around 15 to 20 hours to complete, making it a perfect length that does not overstay its welcome and remains engaging for its entire running time. I can tell you with 100% honesty that I could not put my controller down as soon as I started playing. I spent two days doing nothing but playing the game, sleeping, and repeating, which is some of the highest praise I can give for any game.

It’s not very often that a game comes along which nails everything it set out to do with such a perfect balance of playability, fun, pacing, audio/visual elements, and just about everything else, but Maneater has done just that. It’s a joy to play from start to finish, making it easily one of my favorite gaming experiences not only of this year but of this whole gaming generation so far.

Please do yourself a favor and check out Maneater if you enjoy anything about games in general, especially if you like the themes of aquatic wildlife, social satire, over-the-top comic violence, or open-world exploration; you won’t regret it.