Review: Higurashi When They Cry - Chapter 3: Tatarigoroshi - Rely on Horror 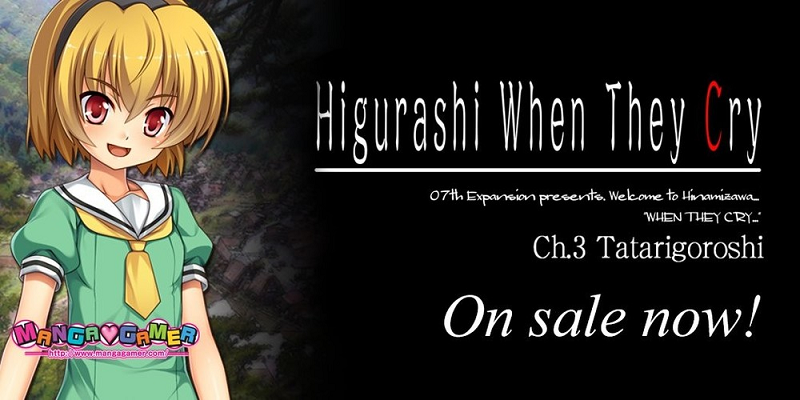 Wow, it’s been a while since we last reviewed a Higurashi game on this website, and a lot has happened since then. Sentai Filmworks licensed the anime adaptation by studio DEEN and has since put out DVD and Blu-Ray releases of the first three seasons, the first two of which complete the main story-line. We also saw the studio responsible for the Japanese remake of this series shut down following its release, but on a positive note, the American localization team is faring much better and recently began working on the spiritual sequel to the series. And now the third chapter is available on steam: Tatarigorshi, the Curse Killing chapter. While my opinion on the visual novel series has been mixed so far, this chapter definitely won me over.

For the third time we return to the cozy mountain village of Hinamizawa, where everybody is friendly, life is always relaxed, and only occasionally outsiders end up brutally murdered. The setup is very much the same as in the previous chapters: Keiichi Maebara is the latest addition to his school’s club – a group of friends that all play games together whereby the loser ends up performing a penalty game. You’ll spend the first few chapters reading through Keiichi’s fun adventures with his friends while a mystery is slowly developed over time. Halfway through you can expect a sudden turnabout to happen that sucks the lightheartedness out of the story and sends it into psychological horror territory. 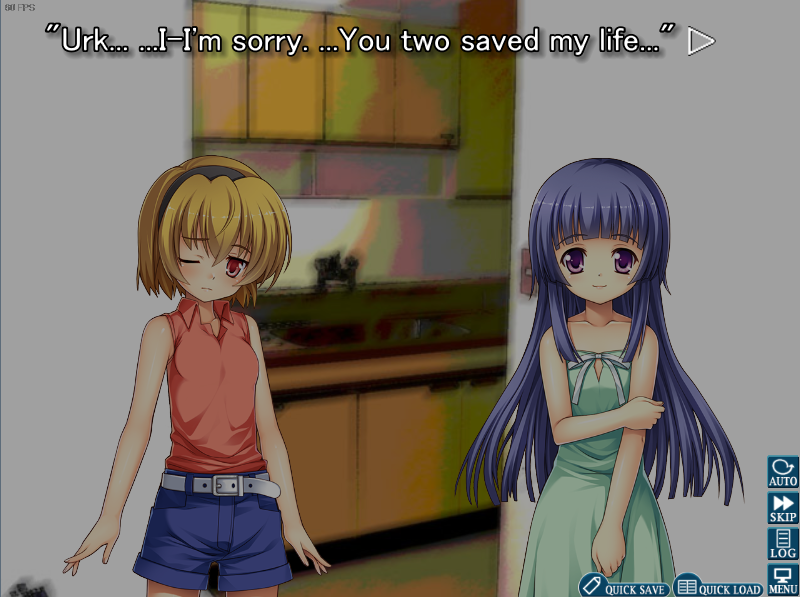 I am getting ahead of myself, however, so let’s get back to those friends. The first chapter focused on the excitable and upbeat Rena, whereas the second chapter told the story of Mion Sonozaki and her twin sister. What makes this chapter immediately interesting is that now we are exploring the story of Satoko Houjou, Keiichi’s devilish underclassmen that spend the last few chapters playing mean tricks on him. I remember the first time I experienced the story of Higurashi, and Satoko was easily my least-favorite character. I didn’t really run a survey, but I asked a few friends and they shared the same sentiment.

Satoko also remained a background character in the last two chapters, even though all the other group members got plenty to do in the Watanagashi chapter. I feel that this was a deliberate choice, as putting the spotlight on her now really makes you feel bad for disliking the bratty little trickster before. Tatarigoroshi puts a heavy emphasis on the relationship between Keiichi and Satako, as she saves him from an accident one night and they begin helping each other out. We learned before that Satoko’s brother Satoshi went missing some time before Keiichi arrived, a recurring plot element from the first chapter, and Keiichi mentions wanting to replace him. Sadly, that doesn’t quite go as planned as fate has cruel plot twists in store for the duo. 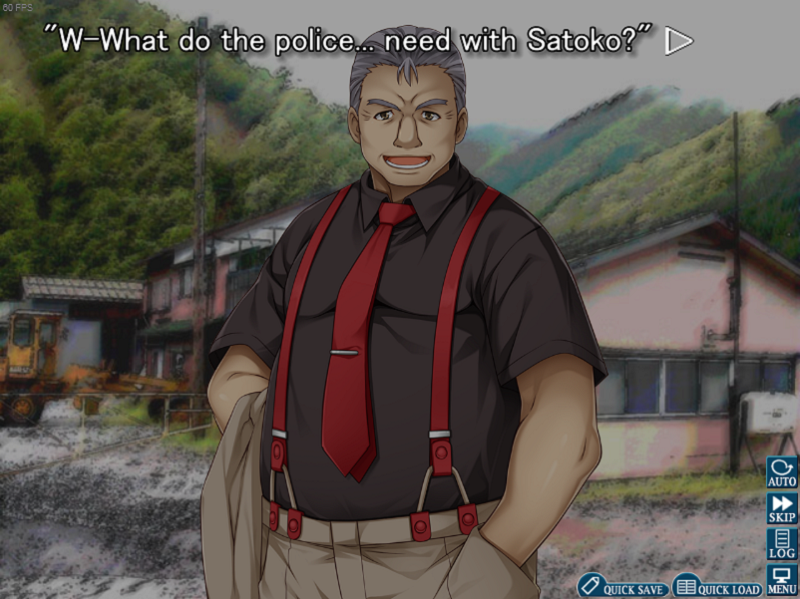 It brings me joy to announce that the pacing of this chapter is the best we have seen so far with the horror aspect of the story rearing its head after about four hours. In-between there are some extra “tips” to read that concern a gory murder taking place around the same time, so those needing a break from the slice-of-life antics can snack on that after finishing a chapter. In those four hours, the brother-sister bond between Keiichi and Satoko is expanded upon, so when misfortune finally arrives the impact is considerable. I won’t go into detail about what exactly happens to Satoko, but it’s unlike any of the horror we have seen so far and in a way also the most unpleasant and depressing to experience. That is definitely a compliment towards the excellent writing, but I will say it was hard to come home from work every day and motivate myself to read more of it. If you’re like me and fiction can makes you legitimately emotional, then you might want to play something joyful in-between reading sessions.

That is not to say the pacing is perfect. Even when breezing through some of the inconsequential comedy segments, my overall play time still clocked in at 10 hours, making it the longest chapter available so far. Overall it reads a lot more pleasantly than Watanagashi, which I criticized for dragging on too much, but both these chapters had the same issue where the dramatic finale is bogged down with too much dialogue and explaining. It’s a case of trying to cram in too many details and I wonder if this will be a recurring issue going forward.

On a technical level, Tatarigoroshi also introduces several new sprites for both new and old characters. Keiichi’s teacher Chie Rumiko and the local doctor Irie Kyōsuke both have their own character sprites, which actually looks quite good in both the remastered and classic art-style. Several new poses have also been introduced for Satoko’s sprite, which are pretty good as well. In fact, seeing Satoko on-screen a lot more in this chapter made me appreciate just how well Manga Gamer remastered her design, considering the classic version made her look like a perturbed crab no matter what pose she was in. Several new music tracks appeared as well and I must say they fit the game really well. Several users seem to suffer from the same technical problem I had, though, where the music has a weird pitch to it. I checked the forums and apparently players have put up some fixes you can download. 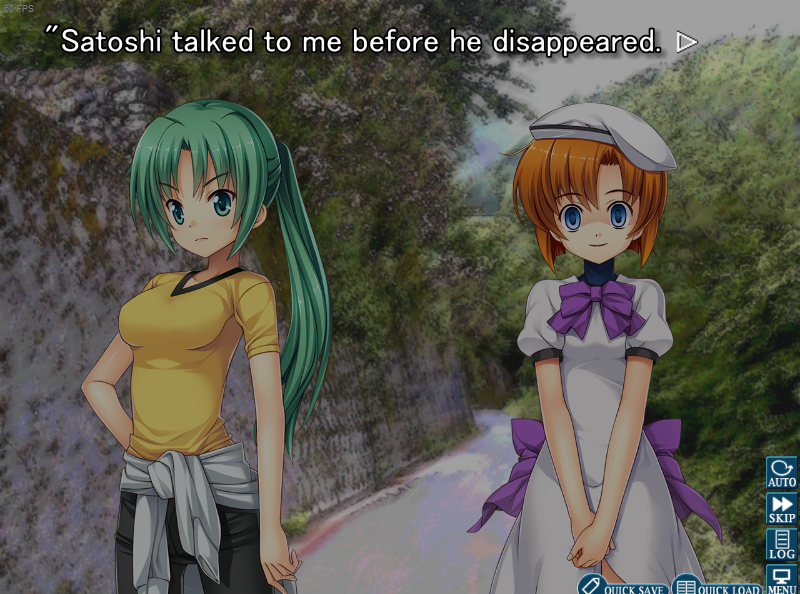 For me, this chapter was a turning point that made a good series with some serious flaws ascend to just a plain, good series. With the improved pacing, extra bits of art, new music tracks, and a story that is getting more and more interesting, Higurashi is now at a point where I can highly recommend getting into it if you enjoy complex mystery stories. After all, Tatarigorshi is good, but I can guarantee you that even better chapters await in the near-future.