Mental illness has been a topic of debate in the horror industry for a while now, as more and more people seem to support the idea that fiction should treat the subject with more expertise and respect. Personally, I don’t wish to offend anyone, but I am also not in favor of suddenly discarding the theme, for it can still be an effective one without necessarily trivializing the troubles of the people that suffer from these disorders. This brings me to Fran Bow, a classic point & click adventure game about a girl escaping from the insane asylum to discover the truth on her own.

The story stars Fran, a ten-year-old girl from a happy family. Her father and mother loved her, her aunt always took good care of her, and she even had a cute kitten called “Mr. Midnight”. Then, one day, a monster appeared before her window and moments later her parents were found in literal pieces. Fran and Mr. Midnight fled the house, but they collapsed in the cold and Fran was eventually found by mysterious figures who brought her to an asylum. 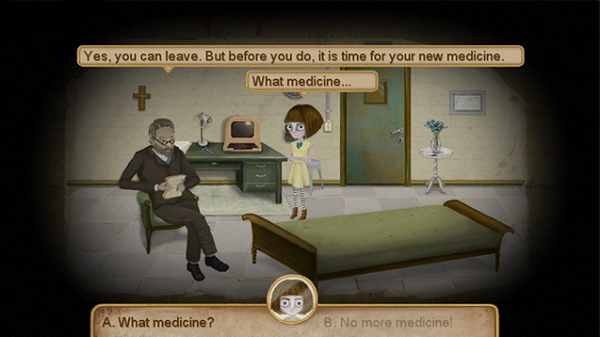 When we gain control of Fran, it quickly becomes apparent she is none too happy with her treatment. She is not making progress, she doesn’t feel insane at all, and she dearly wants somebody to go find her kitty. At her doctor’s request she tries a new medicine, but immediately faints as the world around her turns into a hellish purgatory. That is when she decides it’s time to make her escape and reunite with her kitten to discover the identity of the killer who ruined her life.

In my original news post about this game, people were quick to point out that the plot was remarkably similar to American McGee’s Alice, particularly its sequel Alice: Madness Returns. Indeed, both stories are about a girl who owns a cat and who escapes from an asylum to hunt down the person who killed her family. This similarity is strengthened when the standard point & click gameplay is varied up by a bottle of pills that, upon taking one, sends Fran into an alternate world where the environments are horrific and macabre, much like the corrupted Wonderland of American McGee’s series. The creators of Fran Bow were fully aware of this, however, and included some cute shout-outs in their game. 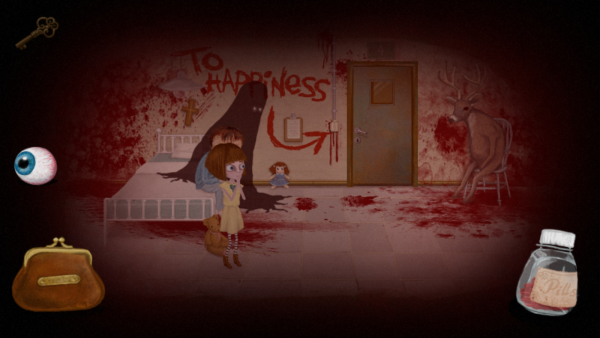 As I just said, gameplay is very similar to the point & click puzzle games of old, albeit more streamlined. You click around the environment to make Fran move and by clicking on items you automatically inspect them, or pick them up if the option is available. At the bottom-left corner there is an icon that opens the inventory and from here you can select whether to use, combine, or examine the various objects you have picked up. It’s simple to understand and the game eases you into it quite well, thanks to the great opening level. The pills are found somewhat later and they are necessary to solve certain puzzles. Some items you need may only exist in the medicine-induced hallucination world or you can use it to make obstacles disappear that only exist in one or the other.

It also just looks really awesome. When “sane” the world isn’t that spectacular to look at, though the art-style is pretty unsettling due to the creepy look of the characters. The pills turn ordinary rooms into violent displays of gore and surreality, so it’s cool to just take them to see what you might run into. Hanging corpses, deformed faces, ghostly apparitions, you name it and it’ll probably appear at some point. Of course, there are also moments when the monster that appeared before Fran’s window the night of the tragedy will appear to threaten her. I was actually quite fond of him, because the ongoing mystery of who he might represent kept me intrigued in the overall story.

This is definitely in the game’s favor, because the gameplay can be a bit obnoxious from time to time due to its difficulty. There were quite a few puzzles where I found myself not even really understanding what the game expected from me and I ended up solving them by brute-forcing every solution possible. While that can be entirely blamed on me not being smart enough, there were also several puzzles that just felt poorly designed. One that comes to mind required me to use a typewriter, but seeing typewriters in the background was so common that I had assumed they were a metaphor for something that I didn’t have to interact with at all. This isn’t the only time when an object that usually serves as set-dressing is suddenly crucial for progression. 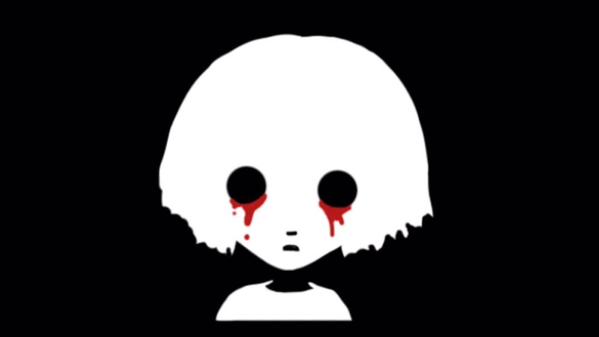 I also felt a bit too restricted when solving some puzzles, like being forced to do everything in a specific order in chapter 3, leading to the entire chapter feeling like a list of chores. I also found that some of my experiments were rewarded with the game instantly crashing to desktop. That is all in the middle, however, and the quality of the puzzles recovers well in the later half. You even get a few fun bits where you play as other characters, like Mr. Midnight, or have to do some skippable mini-games. Just like in Alice: Madness Returns, these take the form of simplistic platforming stages, sliding-tile puzzles, and similar distractions that, while not original or polished, make for a decent break.

The ending left me feeling disappointed, though. I was really into the game and its various colorful characters, and I was extremely curious about the answers to the mystery. While I obviously won’t spoil it here, the mystery seems to get side-lined a lot midway through chapter 3 and onwards, in favor of going in-depth on the structure of Fran’s supposed hallucination. You get an entire book to read that explains the multi-layered foundation the world is based on and the various creatures that live in it. By the time the game gets back to addressing the family tragedy, it does so rather quickly and dismissively, to the point I am still left confused as to what the truth actually was or why anybody in the plot did what they do. What is the aunt’s problem? What was going on with the asylum? Why does the doctor do what he does? It creates more questions than it actually answers, then hastily concludes to credit the whole two people that created this entire game. 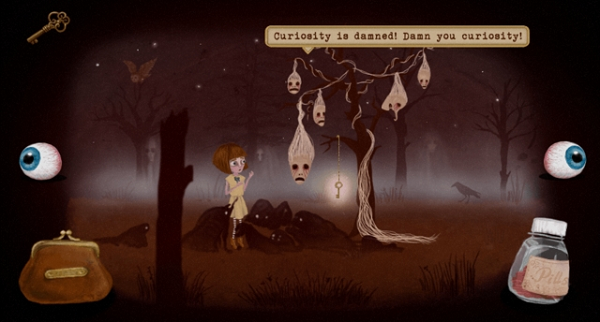 In the Alice games, Wonderland is important to Alice, yet it is never the focus of the story. It serves to support the plot, as the environments and inhabitants take on forms that represent things Alice remembers, allowing her to work through her problems via exploring Wonderland and confronting the evils that live in her mind, with solving the murder of her parents as the ultimate goal she wants to work towards. The battle with the Jabberwocky in the original game is a perfect example of this. In Fran Bow it seems like the murder of her parents serves to support the Wonderland and its story, as Fran becomes increasingly more invested in the detailed social hierarchy of her fantasy and the role its inhabitants want to push her into.

With eight hours of content, beautifully designed areas, and a plot that definitely hits more than a few emotional strings, Fran Bow easily justifies its $14.99 asking price. Not all the puzzles were as well crafted as I would like and the story ends in a direction I don’t care much for, but all in all that takes up maybe 10% of the fantastic horror adventure. Unless playing another game about mental illnesses causes you to foam at the mouth, I can highly recommend this game as one of the most interesting indie titles of the year. Be sure to also check out Tormentum: Dark Sorrow while you’re at it.