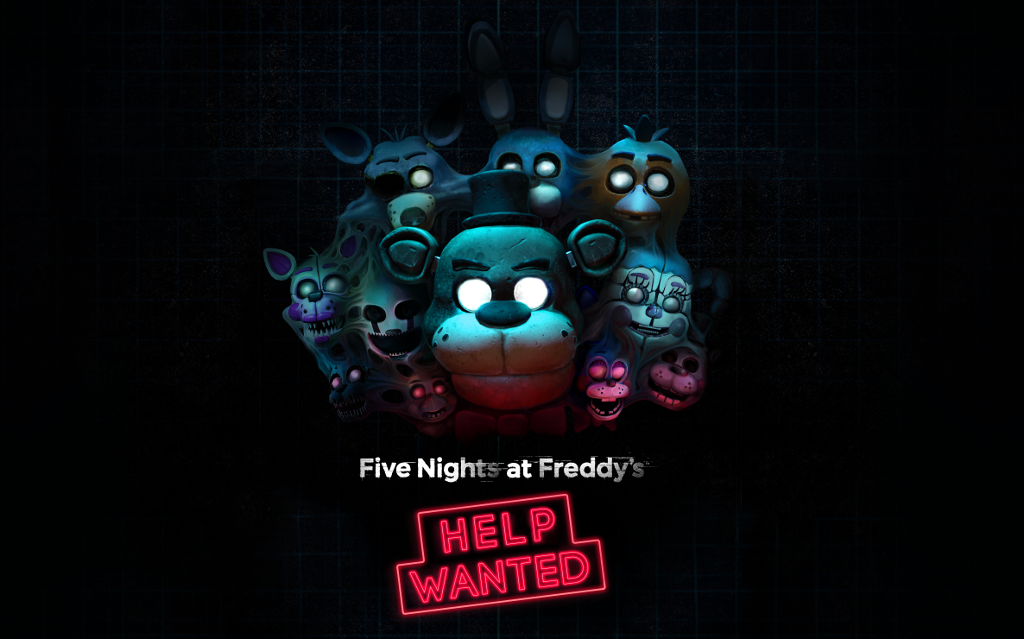 You have to admire the Five Nights at Freddy’s franchise, which manages to take a single feature – the jump scare – and weave an entire gaming experience around it. The most recent release in the series, Five Nights at Freddy’s: Help Wanted, is a port of the similarly named VR game that came out for Rift, Vive, and PSVR last year. Help Wanted has been rejiggered a bit to work on the VR-less Switch, and it mostly succeeds. Mostly.

For the uninitiated, the original Five Nights at Freddy’s takes place in a Chuck E. Cheese analog known as Freddy Fazbear’s Pizza, where the 7-foot tall animatronic characters tend to go a-wandering once night falls. Your role as the overnight employee is to keep your eye on the mechanical monsters and prevent them from reaching you and ripping your head off. The core scenario changes over the course of the games as the restaurant shuts down and the robots are dismantled, but the gameplay remains one of survival. In FNAF 1, for example, you have a limited amount of power to get you through the night and must use lights and electric door locks judiciously. In Vent Repair, you’re trying to fix broken equipment in the titular locales. And in FNAF 3, you’re the night watchman of a Freddy-themed haunted house and have to reboot various electronic systems as they go offline. Your job may change, but your true mission is always the same: fend off whatever is creeping toward you with homicidal glee. I just want to point out that your night watchman gig is almost certainly only paying minimum wage with no benefits and seriously, you can do better. 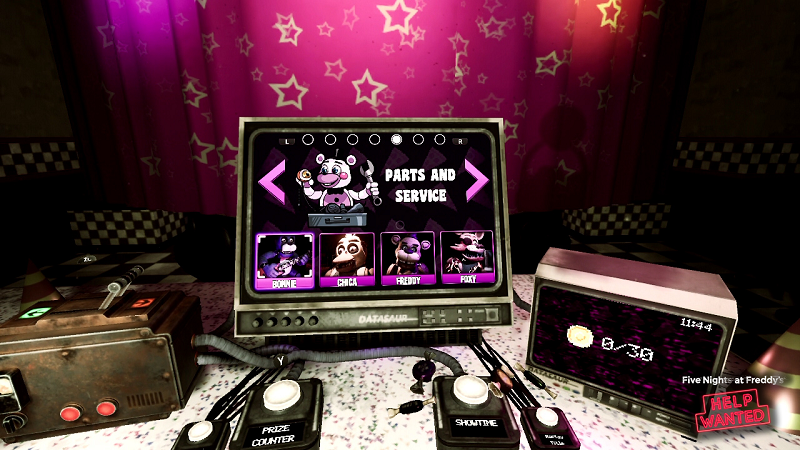 Five Nights at Freddy’s: Help Wanted is an amalgam of scenes and minigames from the five mainline FNAF games. Your overarching goal for each game is, as you might guess from the name, to survive through five nights. Each night is more difficult than the last as the monstrosities get faster and meaner, and you’ll die a lot as you figure out exactly how to beat back their advances. Though you do have to play each FNAF game’s nights in order, you don’t have to start with game 1 and work your way forward. You can hop around from title to title as the mood suits, which is great for those moments when you’re frustrated by a particular evening’s shenanigans. That said, the games get more difficult as they go, as well, adding in more and more elements that require your close attention while trying to fend off the various things that want to kill you.

The controls for the FNAF games are very simple as you push buttons to check your security cameras, pull on a mask to try to fool the robots, or look from side to side. The challenge of the games comes not from dexterity, but planning. Which is not to say that the FNAF games are for deep thinkers – Civ, they are not – but calculating how much time you have before that mechanical rabbit is up in your business and whether that leaves enough time for you to evade the creepy-ass bear (it doesn’t) creates a loop of danger and relief that’s an undeniable good time. The release of tension that comes either from victory or from catastrophic failure is an emotional purge that can leave you feeling quite exhilarated. 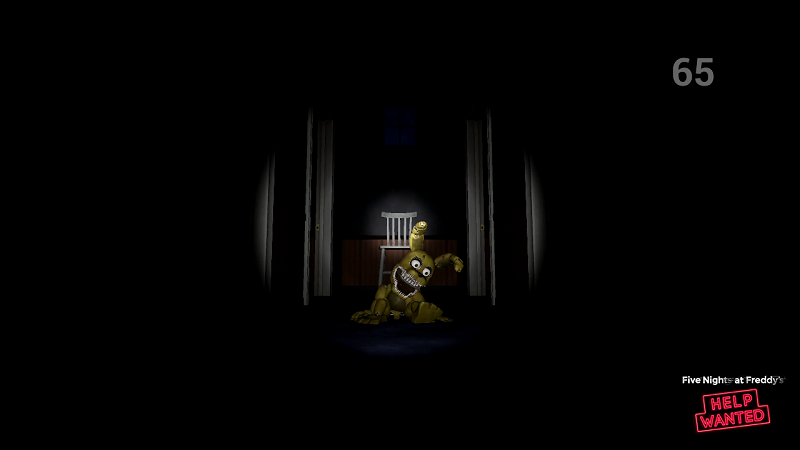 There isn’t much story to the FNAF series, but what is there is darkly amusing. The phone calls and recordings that serve as (very) basic tutorials reference fatal mishaps, and the minigames you unlock as you play through the entire series add in more backstory. To sum it up, the Fazbear empire is right up there with Jurassic Park when it comes to the certainty that it’ll be different this time. Though, admittedly, they didn’t kill children on purpose in Jurassic Park and in FNAF…well. Let’s just say it’s not a software problem that makes the machines go nutso.

Where Help Wanted falls apart is anywhere you’re not manipulating simple buttons or switches. The left stick is used for very limited navigation, such as looking around the control room and simply put, it sucks. It’s so sluggish you may wonder if your controller is broken as you try (and fail) to pick up that hidden token for the umpteenth time. The rest of the controls work well enough but feel very inelegant. It’s pretty obvious Help Wanted started as a VR game as everything in the Switch version feels clunky. It’s all just a little too awkward, a little too rough. You can work with it, but the only reason you should is if you have no other option for playing these games. At no point during your time with Help Wanted will you not be aware of the controls, which makes it difficult to give yourself over to the tension the game is trying to create.

With so many ways to play the games in the FNAF franchise, there’s little reason to pick up Five Nights at Freddy’s: Help Wanted for Switch. The series is ideally suited to the mouse and keyboard of a computer, or the touch interface of a tablet and phone. Help Wanted works on Switch, certainly, and if all you want is a convenient way to take a beloved series with you wherever you go, it’s perfect. But it’s not the best way to experience everything Freddy has to offer, which is the vague smell of flat soda and murder.

Nintendo Switch review code was provided by the publisher.