I want to preface this review by saying that the port of 1993’s DOOM on the Gameboy Advance is one of the most important games in my life. As a child, it introduced me to first person shooters, and cemented a long-lasting love for id Software’s groundbreaking series. When 2016’s reboot of the classic shooter arrived, I instantly fell in love with the brilliant environment design and relentless, fast-paced combat. After so long this series still surprises me, building on a lifelong love of the FPS genre that started with that GBA port.

So when it was announced that one of my favorite games of last year would be making an appearance on Nintendo’s newest handheld, I was hopeful, but skeptical. It was a chance to recapture a piece of my childhood, but how could such a smooth, hardware-intensive shooter make the transition to such an underpowered system? With half the framerate and a massive downgrade in resolution, would it even be worth playing? Thankfully, after going through the campaign and seeing all of what DOOM on Nintendo Switch has to offer, I’m glad to say that it is indeed worth a look for any Switch owner looking to take Hell on the go.

Everything from last year’s DOOM is included in the Switch port, with the exception of the lackluster SnapMap mode. SnapMap in the original release was a fully-featured map editor that allowed players to easily create detailed single player and multiplayer maps , all within DOOM‘s framework. It’s a shame that some of the more detailed player-created horde-mode maps or full levels weren’t extrapolated onto the Switch, but given how resource-intensive the mode was to begin with, it’s an understandable loss, and the experience isn’t worse for it.

Between the campaign, arcade mode, and the full multiplayer suite that includes all three previously released map packs, DOOM on Switch is stuffed to the brim with things to do. Players looking for a quick dose of action can jump right into Arcade Mode, a point-driven experience that focuses on chaining together kills and pickups for high scores. For those wanting a more constructed experience, the entirety of DOOM‘s 10+ hour campaign is here, with five difficulties and hundreds of challenges, collectibles, and secrets to seek out. The campaign is surprisingly well-suited for either brief gameplay sessions or extended playing. Even after finishing it, I’ve found myself revisiting levels to get all the collectibles, or beating them again on a harder difficulty, something I never did on the console version. 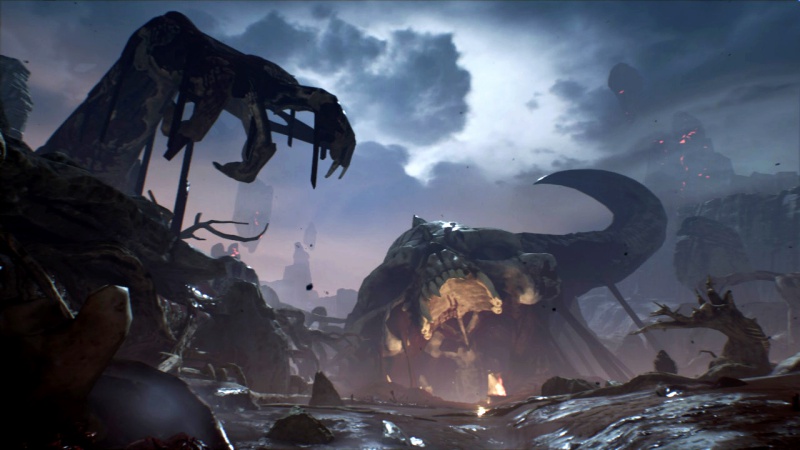 The multiplayer mode was divisive among fans when the game released last year, and I suspect its inclusion on the Switch port isn’t going to change any minds. Despite a massive overhaul with Update 6.66 on consoles and PC earlier this year, it’s still the same arena-based schism of classic and modern multiplayer design. There are health, ammo, and armor pickups, but also Call of Duty-style loadouts. There’s even a dash of hero-based gameplay with the playable demons, which are temporary pickups that give players Overwatch-like demonic abilities for short periods of time. Its wonderful map design and an addictive new progression system kept me playing more than I planned to, but that won’t be true for all players. It’s certainly not for everyone, but if you’re looking to throw down online over wifi, it’s not a bad choice if you can deal with the lacking framerate when the action gets hectic.

Speaking of framerate, DOOM on Switch does come with its share of drawbacks. In making the transition from 60 to 30 fps, there is a bit of adjusting needed for players who are experienced with the game’s console or PC versions, especially when playing in docked mode. In handheld mode, the game looks nearly identical to its counterparts. But when it’s put on a big screen, it is a much more noticeable downgrade. DOOM is locked at 30 fps, but it’s not always a smooth ride. While the framerate stays the same, during more intense combat moments the game will feel like it is moving in slow motion. It never lasts very long, but it can feel a bit jarring nonetheless. The default Joy-Con controls also feel a bit stiff, but there are plenty of options to adjust them to your liking.

The game’s overall resolution also takes quite a hit, downgraded from console standard 1080p to 720p for both docked and handheld modes. Texture quality overall is lower than the original release, and there is a general fuzziness to some objects that can worsen depending on how much action is happening on the screen. There is slight pop-in throughout the campaign, with it being far more noticeable in multiplayer. Even menu screens appear to be lower resolution than the original release, though this is really only noticeable when playing docked. 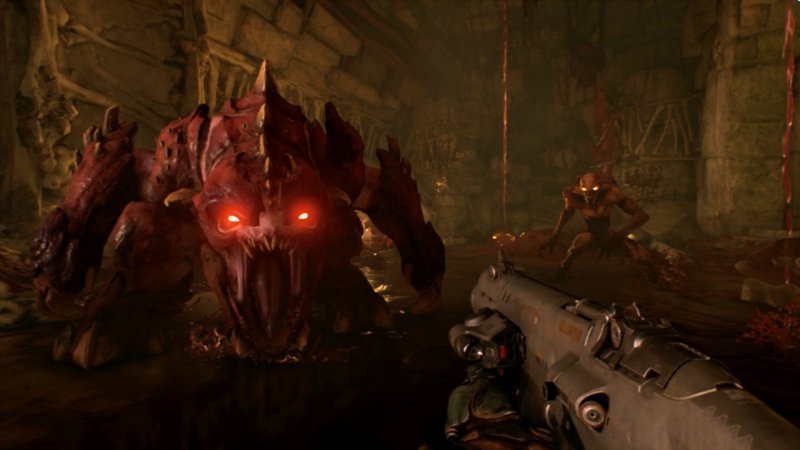 Sound design is thankfully untouched. Mick Gordon’s searing industrial-metal soundtrack is here in full force, and playing with headphones on the Switch might be the first time I truly appreciated the game’s quieter moments because of it. Guns still sound concussive, and bodies explode to a chorus of blood splattering the ground. It’s probably one of the most impressive aspects of the whole port, and goes a long way towards immersing players in the hellish action. There are a few bizarre audio bugs that I encountered throughout, where a random loud sound would play, or the sound would cut out entirely for a few seconds. I was never able to pinpoint their cause however, and I assume they can be fixed with patches.

So how do all of these drawbacks hamper the overall experience? Well, they really don’t. The game’s 30 fps lock rarely breaks, making the game a smooth experience 98% of the time. In action, the game still looks impressive. Partly due to the game’s fantastic art design, but also due to the fact that small details like particle effects and background blurring were kept 100% intact, giving DOOM a polished, detailed feel even when blasting through hordes of demons. It’s a credit to the developer of the port, Panic Button, that so much of the game feels so good to play when a port like this ought to be impossible. It has a few slightly rough edges, but you really won’t care when you’re able to play DOOM at a bus stop, or waiting for your next class to start.

There is a certain novelty to being able to take DOOM on the go, and thankfully the port delivers on that concept wholeheartedly. The same stunning vistas and blood-drenched laboratories are all still here, even if they’re a little blurry at times. The impressive lighting, detailed characters, and bone-shattering sound design are all present and accounted for, just a few steps behind the other versions.  Objectively, it’s the worst way to play the game if you care about resolutions and crisp framerates. But for Switch owners looking to get their shooter fix, or just fans of handheld games and first person shooters in general, this is the real deal.