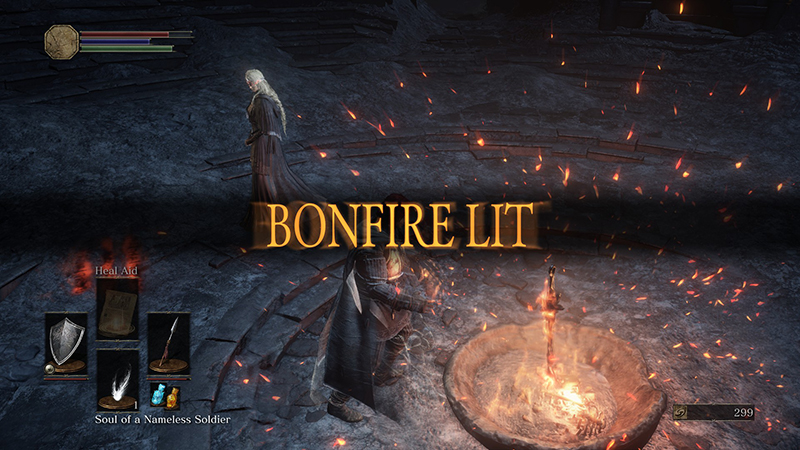 It’s lit. FromSoftware has finally released Dark Souls III, a celebration of the much-celebrated and unique gameplay found in their Souls franchise going all the way back to 2009’s Demon’s Souls. So seven years and five entries later, we can see how well the series has held up and evolved back under the hand of its director, Hidetaka Miyazaki. Shorthand, it’s pretty “gud”.

The world is no better off than where we left it in the last two Dark games. Our avatar, known as the foretold Ashen One, is sent on a pilgrimage to defeat several resurrected Lords of Cinder and relink the first flame, in order to stop an upcoming apocalypse of sorts. Like the past entries, you’ll encounter several other warriors on the fringe of insanity, as well as some vendors who will provide resources to you, and Fire Keepers that will set you on the right path. And again, there’s not too much narrative thrown in your face past the cinematic opening, but things are spelt out far more obviously in terms of item descriptions and allies being less vague, which certainly helps with your character’s motivation. 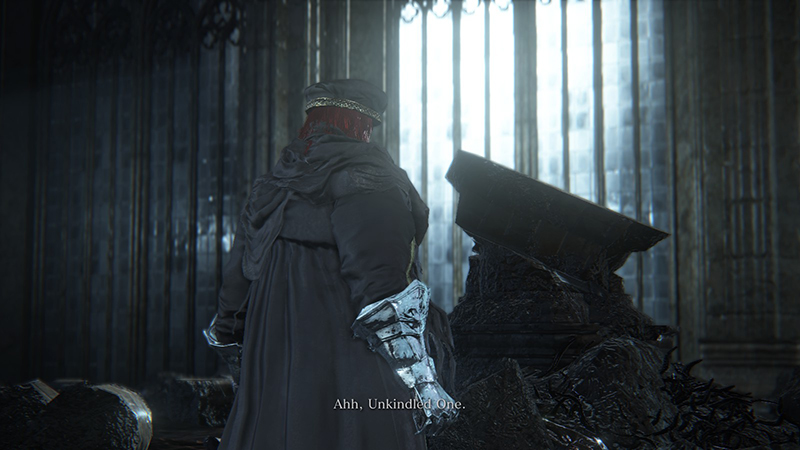 Clocking in at almost 40 hours, it’s just a tad shorter than the first two, but it by no means is devoid of content. Everything present is just less padded and faster-paced. Despite my love for it, Dark Souls did have some moments that felt unfair such as the roof archers in Anor Londo or hard-to-parse like the Bed of Chaos fight. Meanwhile, DS II had a lot of non-memorable locations and an equally large amount of souless (heh) bosses that felt unoriginal, and in some cases, were clones. DS III feels like a Best-Of package that makes the challenge of moving from bonfire to bonfire a lot easier, as well as created a lot of bosses with gimmicks that are easy to figure out while still being challenging. Some of the bosses even have bonfires nearby for quick access versus the slog you had to endure to rechallenge enemies like Ancient Dragon or Executioners Chariot in DS II. FromSoftware has shown that they’ve heard all the critique and took it to heart as at no point I felt the game became a chore or did a location feel unbalanced to traverse. Dark Souls 3 has far fewer bosses than II, but they are more varied than simply “Big guy with big weapon you circle strafe around”. And nearly every obstacle has methods to “cheese” (cheaply progress), let alone summon in a co-op ally to reduce the difficulty to nothing if you find yourself in despair. 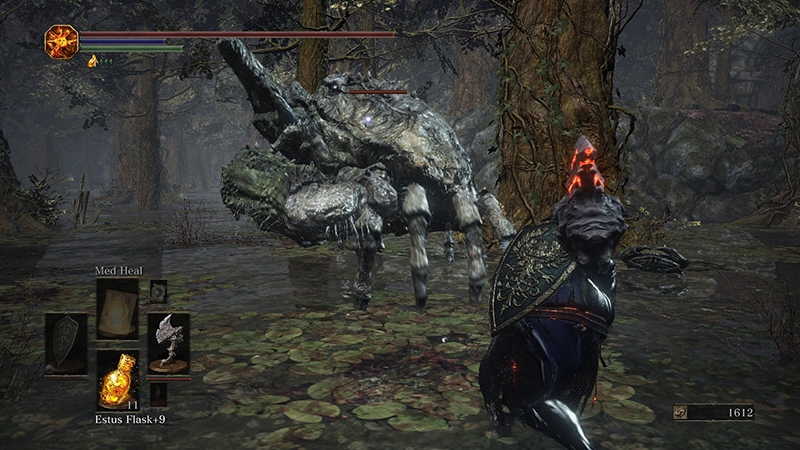 One modification that was a slight bummer came in the form of the game’s locales being split apart into separate zones with some overlap, like DS II but not as level-based as Demon’s. You’ll still get your fill of shortcuts bridging different areas together in a clever way, but it’s certainly doesn’t feel like one unified world like it did in DS. Outside of a few shortcuts to take, the game also feels more linear in this regard. Granted, it’s a well-polished linear that makes sure you never get lost, but that Zelda-like sense of scale is reduced to a straight line with some branches that reconnect to said path.

For most veterans, the one thing that matters is the changes to the gameplay so let’s spend a bit of time covering them. The base changes to DS III are apparent straight from the HUD. Like DS II, gone is the aspect of a Humanity level, but going Hollow (by default) is now removed as well. You still have a stronger state called “Lord of Cinder” which allow you to summon/invade and increases your HP by 30%. This buff, like Humanity, is lost upon death and uses a rare resource called Ember. If you dare choose to, you can choose to go Hollow early in the game, but that mechanic delves into spoiler territory. This change is a welcome one as you’re not immediately debilitated upon death and can take more risks while empowered. You also don’t have to grind for healing items like Bloodborne’s vials as you’ll always have a set amount of Estus Flasks that can be upgraded as the game progresses. In fact, I pretty much played the game straight through and didn’t have to stop at any point to power up because I felt “underleveled” or anything. 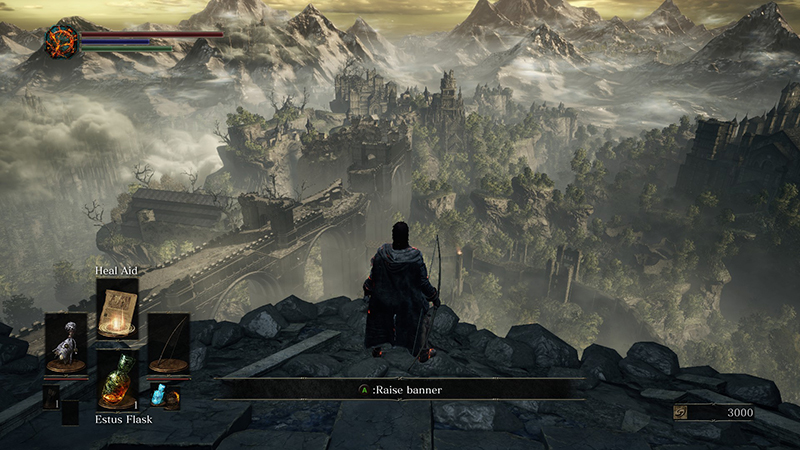 Since we live in a post-Bloodborne world, Dark Souls III has gotten a bit faster and more stylish as well. Everyone moves and acts a little snappier to the point where losing health (almost) seems a little delayed from when you get hit. While still not as blisteringly quick as BB, the game included some new flourishes to combat by adding new techniques specific to each weapon when dual-handing them, adding to the complexity of battle. Some weapons adopt a stance that allows for larger damage in exchange for slower movement while other add buffs or even do AOE-styled spells.

All of these draw from a new energy/mana bar below your health (referred to as Focus Points). Your FP governs your supply of spells as well, instead of having a base number of uses and along with that comes a second type of Estus Flask that specifically recovers that bar. At the Smithy, you have a base amount of Estus Flasks you can carry and must allot how many of them heal HP or FP. So for those into mindless combat, you can just continue to exclusively use regular HP Flasks, and if you’re cocky and want to spam spells, you can just carry the latter and hope you don’t get hit. You don’t have to worry about Min-Maxing in this game as it seems to be built for people to experiment with hybrid builds or change their loadout to handle different tasks. Some bosses I had to tank and some I fought at range. With one boss, I had to equip myself to resist fire and run fast and another involved arming myself with a weapon that did as many hits as possible.

Mechanically, the physics are far more in line with the first game than the floatiness of second, hitboxes and dodging feel as tight as ever. Even the fun of dragging around dead bodies with the physics engine is back, although there’s still some negative bugs present. Enemy pathing can be spotty and I’ve found some monster stuck against or even inside walls. There’s an audio bug which sounds like it should’ve been squashed early on where environmental sound effects like wind will reset after each line of an NPC’s dialogue. One location late in the game called The Grand _____ (the blank is not “Dad”) dropped my framerate sub-20, which compared to everywhere else, my game rocked 60 on High settings. It was essentially the game’s Blighttown, but in performance and not theme. 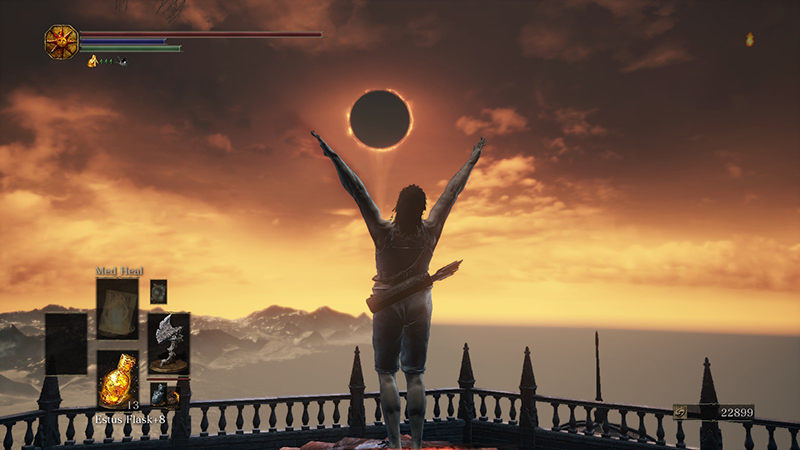 Even though it’s improved on a visual and technical level, Dark Souls III isn’t my favorite in the series. A common quote for the franchise is that everyone’s first Souls game is their favorite. The logic there is once you’ve gone through the gauntlet once, you’ve already seen what’s on offer, just with a different skin and varying levels of success in storytelling. Ultimately, if you played a Souls game before, then there isn’t too much new to be found in DS III outside of a few, cool environmental nods for people invested in the lore. There sadly wasn’t really much to subvert veterans either, especially if your emotions are dulled and cynical to what the game throws at you. The reason why many critiques on DS III, including this one, compare it to past entries is because it’s still very similar to the rest. If you’re a newcomer though, then this isn’t a bad place to start either as the first couple of areas are overall easier than past entries.

However, despite its shortcomings, DS III was a very enjoyable experience that made me feel accomplished with each challenge conquered. These games have been more tense and scary for me than many horror titles for the sense of dread that you can lose your souls at any point or the fear that you’ll face something you cannot defeat. For essentially “The Greatest Hits” of Souls mechanics, it nails almost everything perfectly in tone and gameplay. And even after completing it, my thirst to play more isn’t quenched (queue the Season Pass). However, if you’re looking for more than “More Souls”, you may feel a bit hollow after completing Dark Souls III. Let’s just hope the next game they make with similar mechanics gets a much needed change in setting and style.

Technical Note: The game, for the most part, ran well on PC. Before an early patch, it would freeze up while loading in new environments, but I haven’t seen it since. Other users haven’t been as lucky however and have apparently run into some game-breaking errors, but such is the climate of PC gaming. During my playthrough, while I saw plenty of player notes, I could not summon another player into my game, invade, or vice versa. The game was played on a 3.4 GhZ i7 Quad Core with a GTX 960 video card on Windows 10.