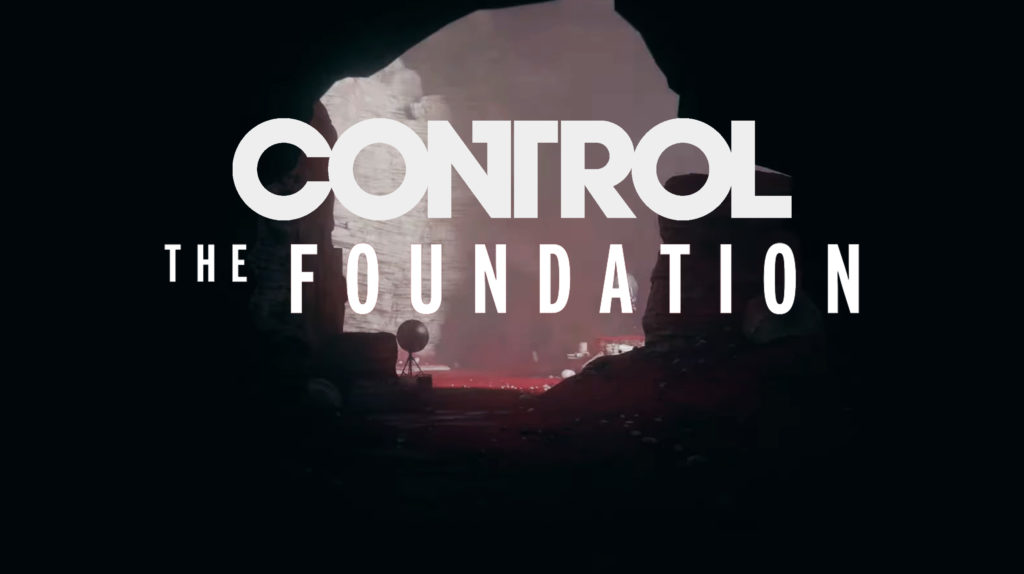 Control’s new DLC, entitled The Foundation is here and it’s just as mind-bendingly spectacular and compelling as the main game is. In the expansion, newly appointed director of the Federal Bureau of Control Jesse Faden is tasked with exploring the endless expanse beneath the Oldest House on a mission to discover the fate of Helen Marshall, the missing Head of Operations, as well as preventing the astral plane from bleeding into the real world and overtaking the bureau.

As Jesse descends into the cavernous depths of the Oldest House, she discovers that a significant portion of the bureau has been transported down into it, and finds remanents of a research team that has been investigating strange hieroglyphics, entities, and phenomena. Working with Emily Pope, the plucky and cool-headed Head of Research, Jesse is tasked with completing a ritual by collecting pieces of what’s known as The Nail, an object theorized to be a part of, or vessel for, the Astral Plane, in order to stop the bleed.

Without getting too much into the narrative details of the game, I will say that the new DLC advances the story in interesting ways and satisfyingly explores how Jesse deals with her role as the bureau’s new Director. It was nice picking the thread of Marshall’s fate back up, since, in the main game, it was a nagging question that no one had the answer to, until now. It was also a treat interacting with Emily again, as she was one of my favorite characters in Control. 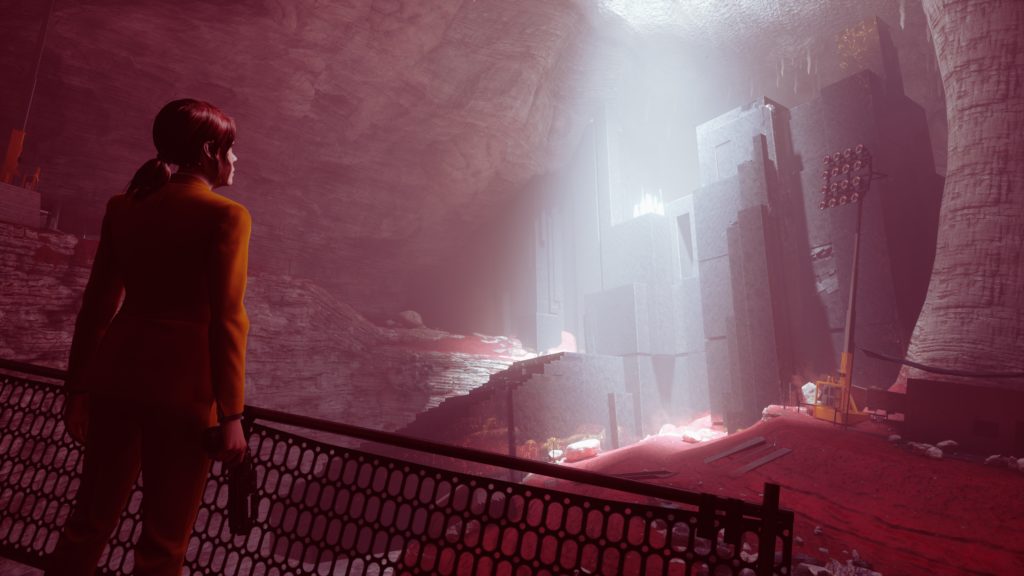 I have been anxiously anticipating the release of this DLC ever since I completed Control, and it did not disappoint. I messed around with the jukebox when the free Expeditions update was released last December, but haven’t really played a ton of Control since then, so it took a little bit of time to get used to the controls again. After about a half-hour though, I was able to find my groove. Even if you have maxed out your abilities and consider yourself pretty capable with Control’s gameplay, The Foundation will still provide a genuine challenge and test your skills and abilities. One section, in particular, took me the entire playthrough to finally complete. It’s a standout part of the game but requires a lot of skill to finish. When you play it, you’ll know which one I’m talking about.

The environments and atmosphere of the Oldest House’s foundations further the bizarre aesthetic and trippy mood featured in the main game. The setting has a very archaeological feel to it and the landscape is populated with pale, jutting rock faces and an endless amount of inexplicable red sand, making it very distinct from other sections of the game. The new areas also feature crystal formations that can both provide retractable platforms that can help you reach different areas, as well as cylindrical shards that block access to different sections.

Jesse is equipped with new abilities that help her deal with these crystal formations called Create and Fracture, respectively. While these new abilities don’t inherently change the way the game is played, they offer just enough variety to spice things up. They’re also woven pretty organically into the environments and sometimes require you to really look out for them. 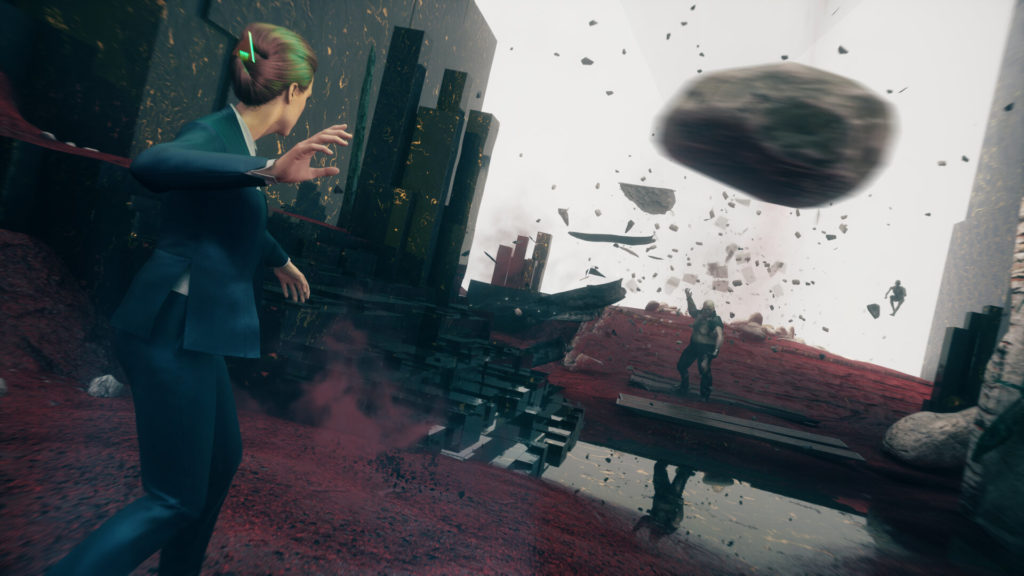 In addition to challenging level designs, the DLC also features a new enemy type called the Hiss Sharpened which are a step up from the normal ones you’re used to encountering. They’re equipped with pickaxes and furiously rush at you, as well as having the ability to teleport around you. These guys were not as easy to dispatch and I really had to take my time and use all my abilities together to knock out a swarm of them. Utilizing my service weapon in addition to my Launch, Melee, and Ground Slam abilities, I was able to defeat them, but oftentimes just barely. Every fight was frantic and intense, and every victory hard-fought.

Luckily, the expansion also features new abilities and additional upgrade slots for your various abilities, like Health, Energy, Levitate, Seize, and Shield. You’ll need to utilize just about everything in your arsenal to overcome the new challenges and environmental obstacles. I was glad the new sections and enemies weren’t a cakewalk and felt elated every time I made it through an encounter — usually by the skin of my teeth.

While the main focus of The Foundation is finding Marshall and stopping the Astral bleed, it also features some additional side quests involving two Objects of Power and the opportunity to collect some more jukebox tokens. I made a point to complete every mission in the DLC since I wanted to make sure I didn’t miss anything. The game has a unique ability to compel you to search every area and leave no stone unturned in order to uncover all its secrets. As a result, I was satisfied with my time spent during its 3-4 hour campaign. 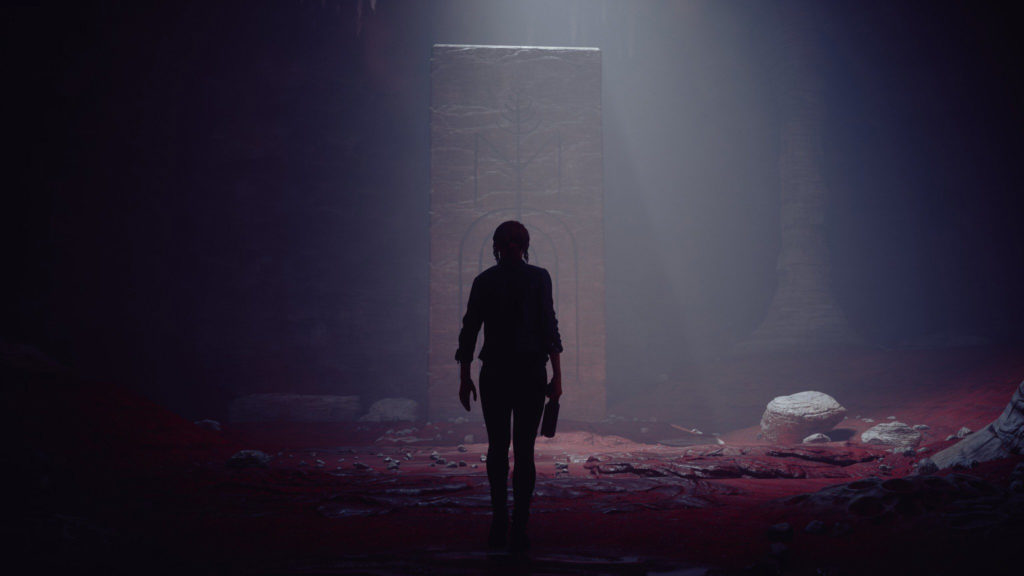 Remedy continues to demonstrate its top-notch storytelling skills and razor-sharp art direction in the videogame medium, and The Foundation is no different. While it’s not more than a couple of hours of gameplay, this new DLC is still a substantial addition to the narrative-heavy main game. It furthers the story in meaningful ways and adds genuinely engaging new content. If you’re a fan of Control, you owe it to yourself to pick this one up. It’s well worth it.