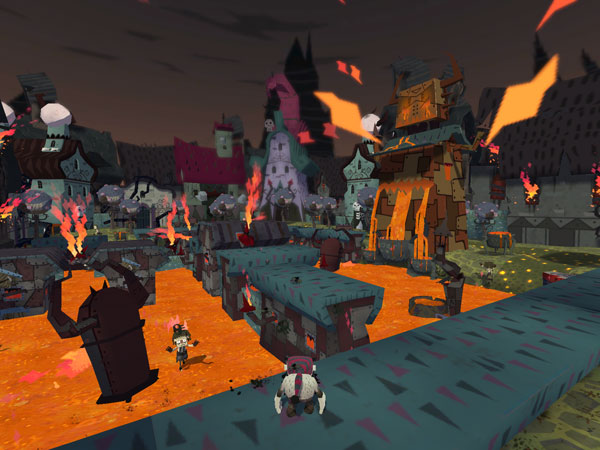 I have always felt that Grimm was a bit of a strange series. This episodic franchise puts players in the role of the titular Grimm, a raunchy dwarf who has a hatred for all things fluffy, cute and sugary. In each episode, Grimm delves into a famous fairytale that most will remember from their childhood, and proceeds to corrupt the events and people within it in order to provide a darker version that better emphasizes the original morals of the story. It’s a project that neatly sums up American McGee’s style, but it generated very little hype when it first released and was met with lukewarm reviews. Now that the series has been re-released on Good old Games and Steam, I set out to discover if the modern, indie-loving audience of today could perhaps provide the game with the love it deserves, or if it really was just a mediocre series of adventure games.

As stated above, the goal of the game is to help Grimm corrupt famous fairytales, which you do by simply moving him around; Grimm emits an aura of corruption, which turns everything in his vicinity into a darker version of itself. A meter at the top of the screen informs you how “dark” each area has become and at set milestones, Grimm will level up, increasing his agility and range, as well as allowing him to destroy objects he couldn’t harm before. Besides making sure to pollute the world as much as possible, you also have to deal with its inhabitants, who will try to clean up objects you have come into contact with. These “cleaners” can be temporarily stunned or permanently corrupted if your meter is high enough. 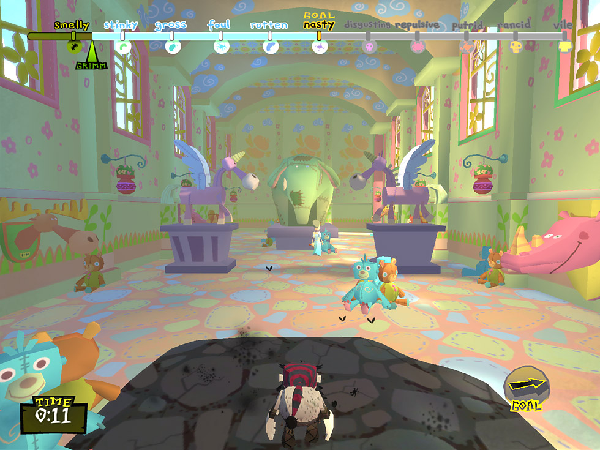 Each episode is separated into scenes that last about five minutes apiece and in order to proceed through these scenes, Grimm has to butt-stomp in front of a marked objective once his meter has reached a certain milestone. These targets are usually the key-components of the stories, such as grandmother’s house in Little Red Riding Hood, or the gallows in A Boy Who Learns What Fear Is. Once all the objectives have been met, it’s off to the next scene with a new meter.

It might have been a while since you played a good third-person platformer, especially since A Hat In Time isn’t out yet, but you can probably agree that just moving around a level doesn’t sound like very exciting gameplay. While this is definitely true, I never felt like Grimm would have benefitted from more elaborate gameplay mechanics, and it instead shines in its presentation and story. I was especially fond of the level-design, which manages to be very busy and active without cluttering the playing field. In particular, I would like to congratulate whoever designed the windmill farm stage of The Girl Without Hands, because that was the most awe-inducing level I have seen in years. 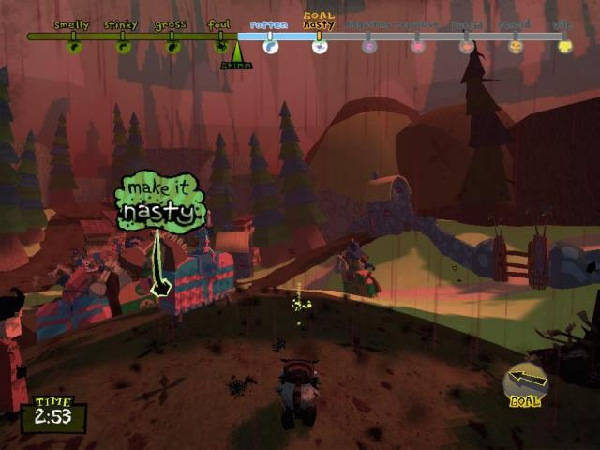 In Season 2, however, the story moves more towards a traditional “platforming” experience and features several scenes where the focus is more on precise movement than actual corrupting. This is where the game can become somewhat frustrating, as Grimm’s movement is tied completely to the meter, meaning there is no standard movement speed, and you can never be absolutely sure how far you can jump. By standing still, you can have Grimm pee in an arc that will show you exactly where you will land if you jump now, which works in the relatively-easy platforming sections of the first season, but it really becomes useless later on because of moving hazards that you must run away from or because the platforms move too fast for the stream of pee to catch up with. I still commend these levels for introducing more variety, but I found myself giving up on several scenes simply because I couldn’t make it past some of the more obnoxious sequences.

Season 3 manages to combine both the fun of corrupting and interesting platforming into one package, and is therefore the most enjoyable, which is further helped by it having some of the better fairytales (Mulan, Jack and the Beanstalk, and Snow White). It also has a few minor interface overhauls which I really appreciated.

Besides serving as the character you play as, Grimm also fulfills the role of the narrator, and this is where some of the best humor comes from. I was especially fond of the introduction videos for each episode, wherein he starts off telling the story as we all probably remember it, simply because his reactions to the sugar-coated nature of these tales is hilarious. Within actual gameplay, there is an abundance of visual humor and Grimm – as well as some of the citizens, could be relied upon to spout a variety of funny remarks. 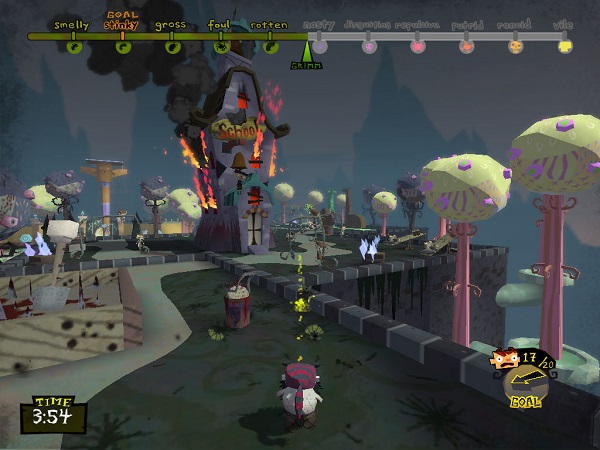 On the technical side of things, Grimm will run rather well on most modern computers and doesn’t demand too much from hardware. However, each episode is a separate program, which means it takes up a total of 12 Gigabyte of hard-drive space and also that you will have to manually configure the options of each episode separately. While little can be done about the size of the game, it would have been nice if the window from which you select what episode to play contained a menu that changes the options for all episodes at the same time.

Aside from that, and the somewhat lackluster second season, this episodic series really is worth trying out. It looks great, it has interesting gameplay, and it’s also reliably funny. If the prospect of restoring classic fairytales back to their dark origins sounds appealing to you, then I can highly recommend this game. You can choose to buy either the whole package, each season, or each episode separately, but my recommendations are: the entirety of season 1, The Master Thief, The Singing Bone, Cinderella, The Pied Piper and the specific episodes of season 3 I mentioned earlier.