Deadly Premonition (Formerly know as Rainy Woods) is a very difficult game to describe. It was originally planned for a 2008 release, but complications due to its striking similarity to the David Lynch television show Twin Peaks caused it to be delayed. Deadly Premonition requires a special mindset to fully understand what makes it so great. In other words, it’s an acquired taste. From a “normal” point of view the game would be trash due to the graphics alike the last generation of games, stiff controls, and sketchy voice acting. But ladies and gentlemen, that is what makes this game so damn fun. So many things are wrong in this game but that’s what makes it work. 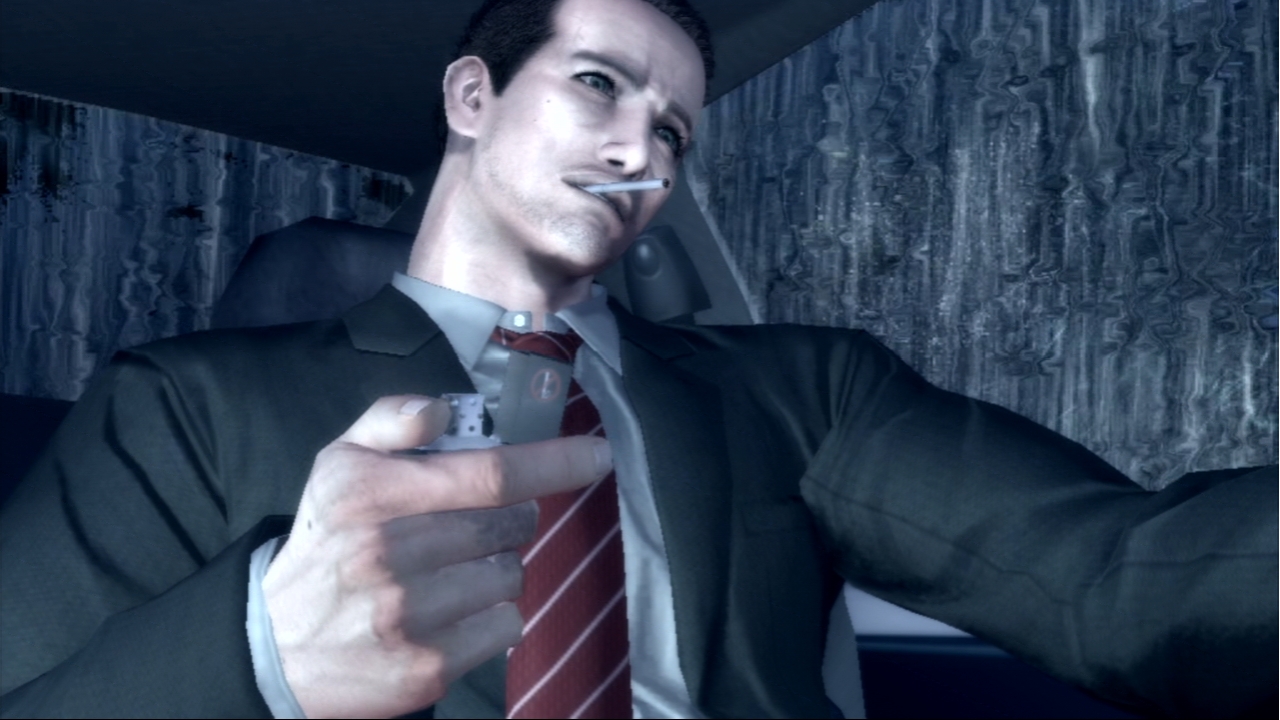 You play as Special Agent Francis York Morgan (Just call him York, everyone else does.) Actually it’s tough to describe. While you do control York’s movements, you’re often given control as Zach for your opinion. Zach is York’s imaginary friend who resides in his head. Yeah, York is crazy. You as the player respond and listen to York as if you were Zach. This adds a strange element unseen in any other game; it can almost be described as a second-person game. But don’t mind that, it’ll just confuse you even more.

York is truly a memorable character with his awkward smiles, his misunderstanding of other’s emotions and his ignorance to what is appropriate diner talk. York is an FBI agent that is lured to the small town of Greenvale because of the murder of a woman –which happens to be York’s specialty. Your partners are local law enforcement sheriff George, deputy Emily and deputy Thomas. The characters just scream cliche. You feel like you have seen them before.

George is a hard-ass cop who does not appreciate the FBIs involvement in his home town. Emily is a kind women who does not seem like cop material, but does it for the greater good of her town. Thomas is probably my favorite of the three. The game tosses you some not-so-subtle hints about Thomas’s sexuality by his great cooking skill, his floral themed desk accessories and his timid nature during talks. All of the characters in Deadly Premonition are oddities. 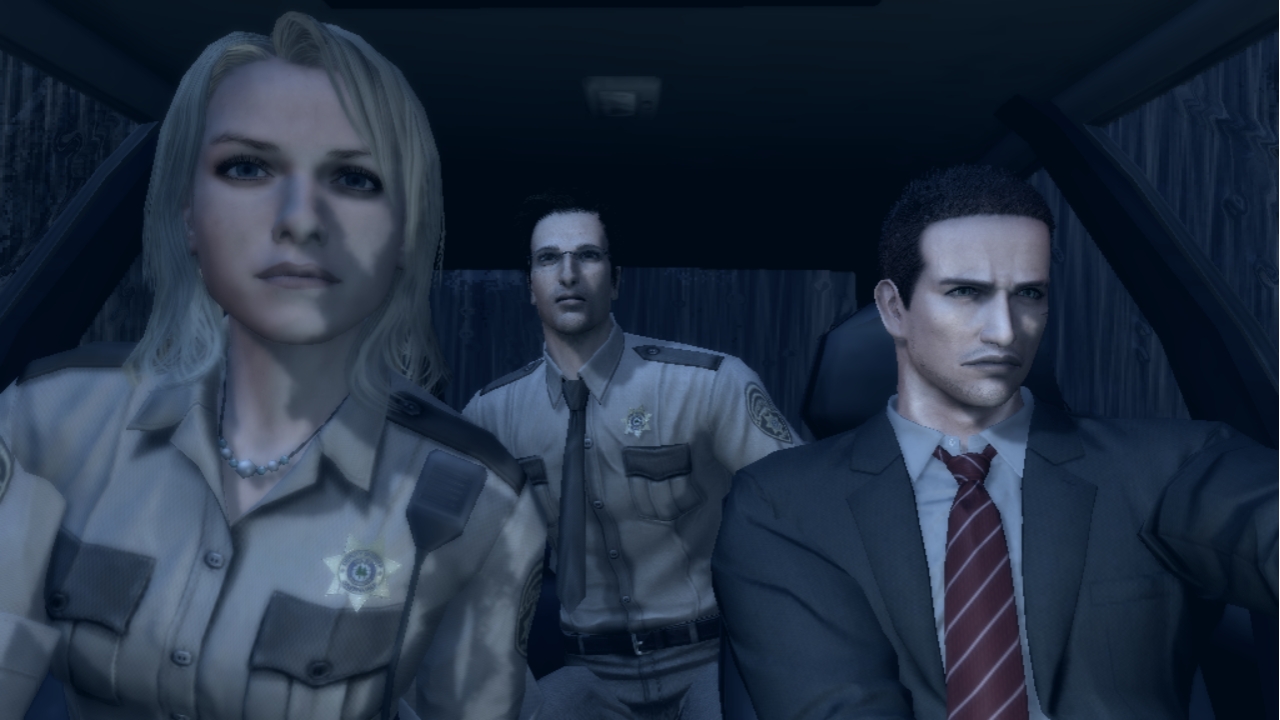 Deadly Premonition is an open world horror game that sort of feels like a mixture of Silent Hill, Shenmue and No More Heroes. The entire town of Greenvale is open to explore. There are loads of side quests, fishing mini-games, collectible cards and other secrets lying around. There’s even another possible murder. The game has a lot to do outside of the main story.

York is man who loves his coffee, and his sleep. So of course there is a tiredness and a hunger meter you must maintain or else York will start to lose health. No worries though, they do not to be maintained to such a degree as to cause inconvenience. York will eat and sleep according to story sequences so very little attention needs to be given to the meters. There are loads of items to gather for your man York. A large assortment of food can be found all over Greenvale from turkey sandwiches with cereal in them to donuts. You never have to eat the same thing everyday. Coffee. which is vital to any FBI agent, keeps York alert and in the story gives him life advice. He is a card ain’t he?

The enemies in Deadly Premonition are fairly plain looking but their movement and attacks will leave you dumbfounded. Not so much zombies but possessed humans, they will walk at you…backwards. The most disturbing and most original attack I have ever seen in my long years of gaming is in this game. It seems the enemies of Deadly Premonition love to tickle you…from the inside. Any chance they get, a backward leaning enemy will try to shove their entire arm into York’s mouth. The game is just full of WTF moments in all aspects. While not equipped with many lines, the poor souls will yell things along the lines of “I want to die!” in a very deep elongated voice. Like most of the audio in the game, it will stick with you for a long time. The soundtrack is repetitive and awkward. One theme plays nearly every time there is dialog among characters. While it should be annoying, it turns out to be hilarious. Even if the current dialog is about brutal rape and decapitation. I found myself either humming or whistling to the soundtrack every time. 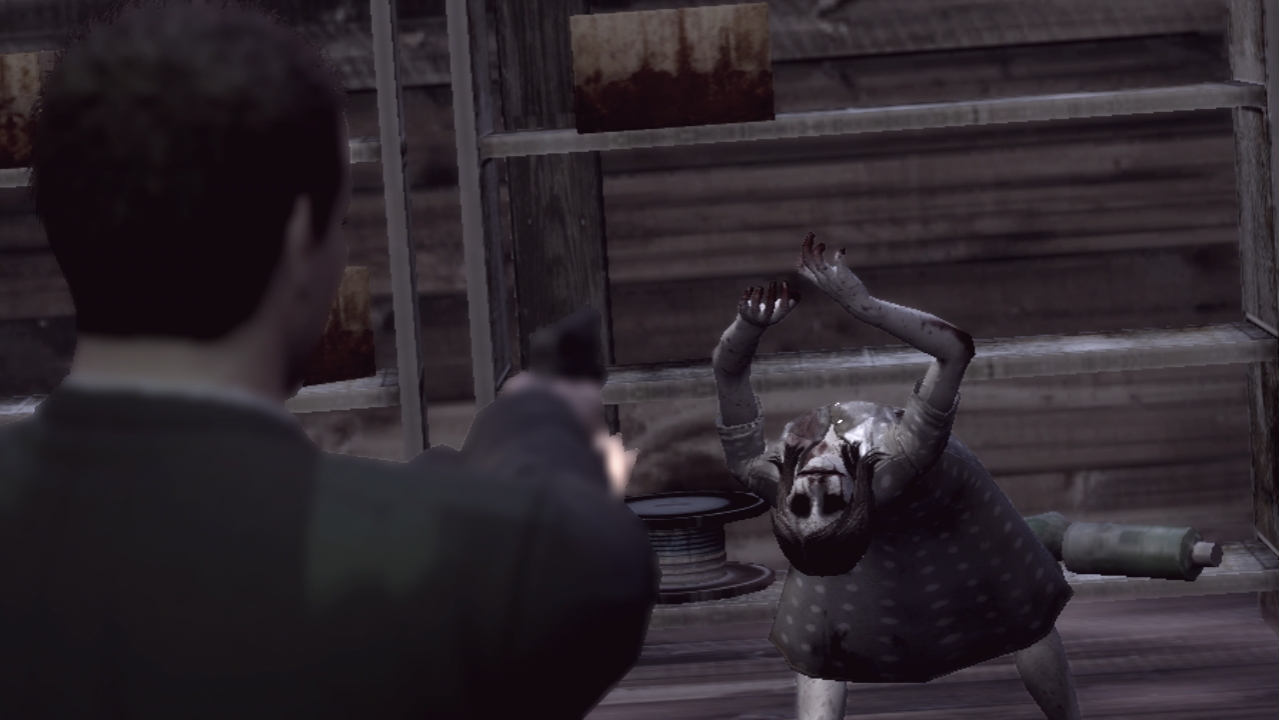 Now just because the game is enjoyable I won’t ignore its obvious faults, which from a technical standpoint are aplenty in this title. The controls are stiff. Aiming weapons seems a bit too constricting, as if the developers wanted to add weight to them. Melee weapons aren’t much better, but at least you can walk while wielding them. York suffers from ‘Resident Evil syndrome’. He just can’t seem to multitask using his legs and shooting.

As for the graphics: they are pretty bad. Environments and objects are blocky and textures are at a low resolution. The draw distance is also mediocre. The town is pretty empty most of the time as well. An occasional car can be seen driving by or a significant character doing their dailies but the streets are pretty deserted. It looks like it was meant for the PlayStation 2. Yet somehow all of these faults don’t detract from the sheer awesomeness of the title.

Word to the wise, if you want to avoid major spoilers of the game, avoid watching it’s official trailers besides the above one. For some reason, the trailers seem hell-bent on spoiling half the game for you.

Still I struggle with the words to fully describe Deadly Premonition. Something that should equal terrible and outdated somehow becomes a horror game masterpiece. The story, strange characters and the huge chunk of awkwardness that seeps from this game makes me love it. It’s not often that price is talked about in a review but Deadly Premonition is a budget title that I would have gladly paid full price for. For just $20 you’re looking at twenty hours of one the strangest and most original games in a long time. This is a must have title for gamers who enjoy story and atmosphere over gameplay, and can appreciate last-gen horror. You’ll finish and end up quoting this game for months. Check it out.