If you happened to purchase, or are planning on purchasing Dead Space 2 for the PS3, you got/get a nice little bonus.  Bundled with every Limited Edition (i.e.: regular edition) of Dead Space 2 on the PS3 is a new and improved Dead Space: Extraction.  The new Extraction utilizes the PS3’s Move controller, or a simple Dual Shock, and includes Trophy Support.  But is it really worth the hard drive space?

Dead Space Extraction first came onto the scene two years ago for the Wii.  Unfortunately, being a) a rail shooter b) on the Wii, a lot of gamers might have overlooked it.  We’re gamers too; we understand console bias just as much as anyone else.  We also understand empty pockets and bills to pay too, so Extraction being bundled with the PS3 edition of Dead Space 2 scores bonus points already.  You can take a look at our review for Extraction on the Wii here. 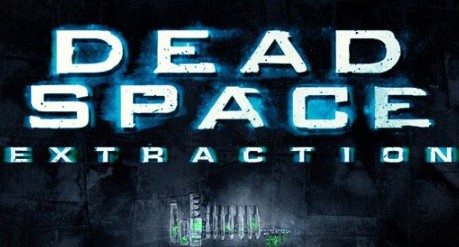 So now we have Dead Space: Extraction for the PS3 – how does it fare?  Well…it’s a two year old Wii game.  Not to say that’s a bad thing, but being that it’s being ported to a more powerful system, you’re definitely going to notice a difference in the visuals and some of the production quality.  Other than that, the Playstation Move and a Nav controller do the same job of a Wii-mote and a Nunchuk and they do it extremely well.  The controls are tight and responsive.  We haven’t tried it without a Move controller, so perhaps one of our readers could give us some insight?

Extraction takes what’s great about Dead Space and throws it into an easily digestible on-rails shooter.  A great anticipation builder for Dead Space 2 (I haven’t played Dead Space 2 yet…sniff). Just because it’s an ORS, you shouldn’t expect that the key to getting rid of Necromorphs has gone out the window into the vacuum of space.  Strategic dismemberment is still a key part of the gameplay here and just as before, it’s pretty fun.  There is also a limited aspect of exploration to the game as well, hunting for collectables, ammo, audio logs…we don’t want to think of it as Umbrella Chronicles in the Dead Space universe, but you can if you like.  Actually, it’s more like Darkside Chronicles due to all the content, that’s here. 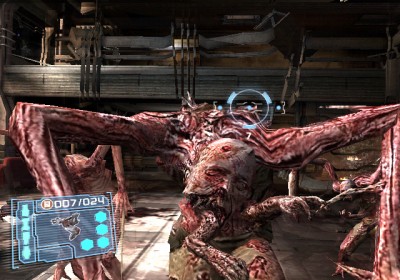 Jason Graves provided the score to Dead Space Extraction, and it has that same Dead Space feel fans know and love.  It’s genuinely creepy, even though the game and your progress is partially guided.  The levels have a good length and Trophy support makes additional replays a joy.  There are some really creepy moments to the game, but it’s that same fear that permeates the entire series.  The whispering that seems to be coming from the walls, hallucinations,

Unfortunately, there are some things with Extraction that start to grate on your nerves after a while, and for this reviewer, it would have to be the character interaction and development.  Personally, I’m not expecting Oscar-level performance out of a video game, but there are times when Extraction falls dangerously close to ‘horror movie cliché’ territory, and some of the times where characters were supposed to be screaming in terror or agony, they seemed only mildly disappointed.  Not a deal-breaker though, because sadly cheesy dialogue and stereotypical characters are part of the survival-horror/horror gaming routine.  Almost as much as going into the scary house after dark when all of the other people that have gone in before you have disappeared. 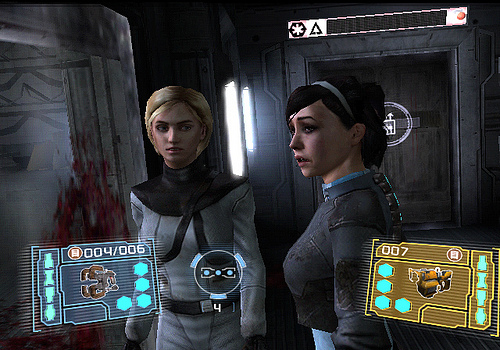 No, what would have to be the deal breaker would be the fact that there exist several points in the game where it’s easy to glitch up, and during my personal playthrough, it did.  When you consider that there are no respawn/checkpoint spots in levels, and some of these levels can get up to 40 minutes in length with unskippable cutscenes…you get the idea.  While these glitches are admittedly pretty rare, they do still happen.  And “disappointing” is the word we use in mixed company.

Extraction, while still being an on-rails shooter, is a solid addition to the Dead Space universe.  If you didn’t have a chance to play it before, you should definitely pick it up now.  Extraction makes it an excellent reason to pick up the Ps3 version of Dead Space 2 and it’s all on the same disc.  Tah-dah!