The Woman in Black: A Retrospective - Rely on Horror

The Woman in Black: A Retrospective 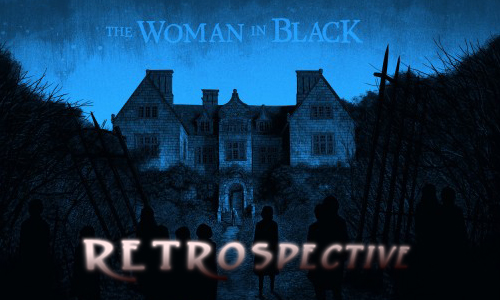 We have so much to look forward to this year, don’t we? Three new Resident Evil titles, beginning with Revelations releasing in the US tomorrow, and three new Silent Hill games, starting in March, as well as new movies for both series.  But what about the rest of the year? There’s lots of other horror-related things right around the corner, and they have nothing to do with Resident Evil or Silent Hill.

Take, for instance, “The Woman in Black”, which officially released on the 3rd of this month. While for a lot of people, this film is living up to its casting choice of Daniel Radcliff as the main character Arthur (who is pretty much only known for his work in the 8 Harry Potter films), the movie has a lot more going on for it than casting a well-known actor.

To my surprise, almost nobody I know knew this film is a remake. Nor did they know it was based on a book. Well, I’m taking this time to educate anyone with the misconception that Woman in Black is nothing but a vehicle to get Daniel Radcliff out of his Harry Potter reputation. 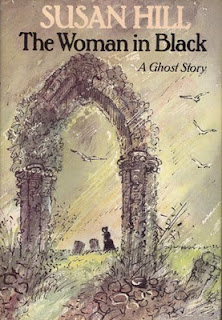 The Woman in Black is originally a novel, published in 1983, written by Susan Hill, who has written 20 something other books between 1961 and 2010. Set in 19th century Britain, the novel centers around a young solicitor, Arthur Kipps, who is called upon to handle the estate of the late Mrs. Alice Drablow, a widow who kept to herself in an ageing mansion that can only be reached via a Causeway (a road or train rail that crosses a body of water), and can be completely cut off from the main land when the tide rises.

After the funeral, it is Arthur’s job to sort through Mrs. Drablow’s papers and legal documents, and he becomes trapped in the mansion after a freak storm rolls in, cutting him off from leaving the Mansion without a boat. Over the next several days, Arthur begins to experience increasingly frightening hauntings by a purported “Woman in Black”, experiencing anything from strange noises to objects moving and rooms rearranging themselves. I’m not going to give anymore away than that, but let me tell you, the crap seriously starts to hit the proverbial fan. To this day, it is still regarded as one of the most frightening ghost stories of the 20th century.

The book was well received, and in 1989, the book was adapted into a stage play. I had the great fortune to see this play performed about seven years ago, at The Road Theater Company in North Hollywood, and I couldn’t believe how intensely frightening it was. The play, performed by only two actors (Currently David Acton and Ben Deery) is a lesson in pantomime, as an older Arthur attempts to hire an actor to put on a play of his experiences in the Mansion. Using elements like body language and sound design to put on the show, it starts out a little slow, perhaps even cheesy at first, as you watch these two actors perform scenes like riding a bicycle (By one actor sitting on a chair an pumping their legs while the other spins an open umbrella to indicate the spinning front wheel) or riding on a train (sitting in a window while rocking slightly and smoke pouring across). 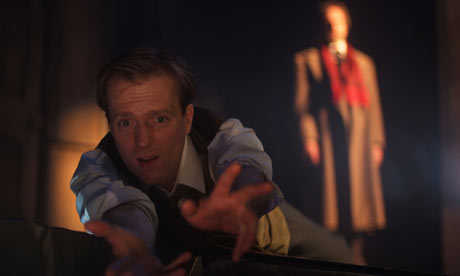 It’s easy to feel totally under whelmed by the pantomimed actions and small stage (It’s REALLY tiny, and the audience only seated about twenty or thirty people), but it’s all to lull you into a false sense of security, as the horror begins. Sound design and lighting really come into play, and as the haunitings begin, you quickly start to feel uneasy, and pretty soon your closeness to the stage and the small scope of the theater turn into a true sense of claustrophobia, and you feel just as enveloped in the ghost story as you would if you where actually being haunted yourself.

The horror play soon turns into a sheer terror play as things start to get really strange, and there’s a moment towards the ending that will make you jump out of your skin.

The play still tours, and if you love to be scared, I DEFIANTLY recommend that you try to find out if it will be coming by your area. 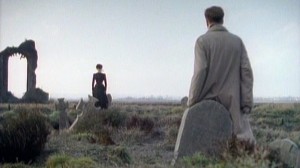 Following the success of the play, “The Woman in Black” has been adapted into both a TV movie and two radio dramatizations. The TV movie stays true to the book, although misses on some of the horror ambiance that the story needs, mostly due to a corny soundtrack and low budget, although it is still widely regarded as being one of the most frightening films ever made. Interestingly enough, Adrian Rawlins plays Arthur in this adaptation, who is known most recently for his performance as the late James Potter in the Harry Potter films. So it’s all circular.

The novel was also adapted twice for BBC radio, once in 1993 and then again in 2004. They follow the book closely, and stir up quite a bit of ambiance with sound design and excellent performances. The entirety of the 1993 version Starring Robert Glenister can be found on YouTube. 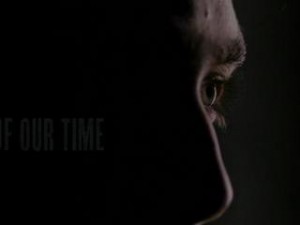 Now, we have the new feature film adaptation from Hammer Film Productions (Which I had no idea still existed, the company’s “Hammer Horror” moniker is perhaps one of the best known in the industry). So far, the film has gotten a 62/70% on Rotten Tomatoes and has otherwise been getting so-so reviews, although I’m disregarding them sicne they seem to be pretty biased (Almost every negative review on Rotten Tomatoes seems to either dislike the movie because it isn’t a gore fest- blood and guts do not a good horror film make- and that the film isn’t the showboat that the Harry Potter films where, which is retarded and unfair to judge a film based on another film because it has the same actor. No body judges the Resident Evil films based on Mila Jovovich’s other films, like The Fifth Element or Blue Lagoon 2).

“The Woman in Black” is a classic parlor-room horror story, up in the ranks of other classics like Braham Stoker’s Dracula and Mary Shelly’s FRANKENSTIEN, more Silent Hill horror than Resident Evil. And we’ll have a review up on this new film shortly. 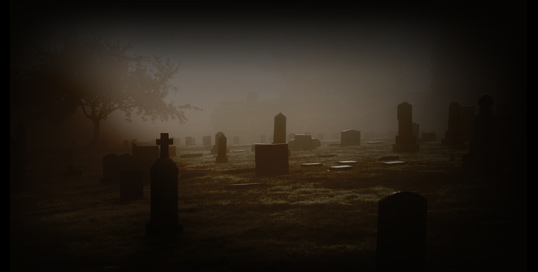 So, are you excited to see this newest adaptation of the classic ghost story? Rattle YOUR chains in the comments below!