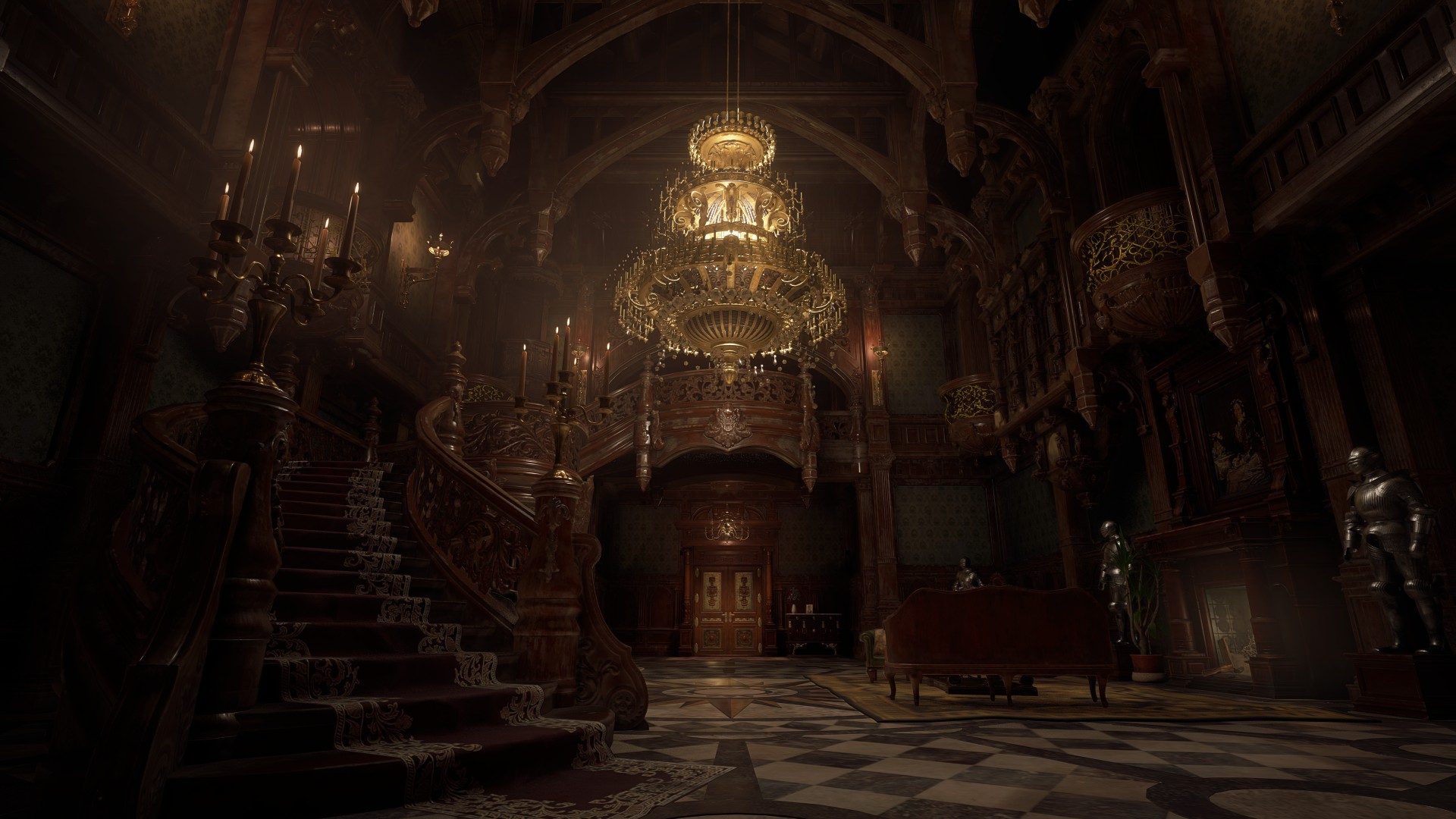 It’s been almost a month since our last snippet of information regarding Resident Evil 8: Village, which you may recall being a whole lot of “we can’t answer that yet“. We’re just a few days from August, which is when Capcom announced to be showing off more of the game. We don’t have a fixed date for that yet, but presumably sometime in the middle or tail end of the month (I’d assume we’d have had a date announcement by now if they were ready to show it off in the first week). While we wait, however, we have an all-new rumor to dissect!

Thanks to our friends over at BioHazard Declassified, a new bundle of information has dribbled out of Capcom’s leaky pipes and they’re a doozy! These rumors purportedly come from the previously reported on Resident Evil Ambassador playtests, although it should be mentioned that this information wasn’t mentioned to us from any of our sources on the previous pre-announcement leak. That doesn’t rule out the possibility of another, less publicly announced playtest for Resident Evil 8. Regardless, take all of this information with the appropriate grain of salt.

The enemies within these areas are very pale, almost rotten skin, with tattoos on their foreheads and hands. Some with armor, but not like knight armor, that can also be shot off. They only speak of “normal” enemy types in this test, not of the “werewolf” like creatures we’d spoke on, and that was shown in the trailer.

They do speak in a distorted foreign language. Some carried daggers, swords, axes, and even spears. There are some without armed weapons. They jump and grab and bite similar to Resident Evil 3, and you can button-mash to take less damage. Some enemies will throw you to the ground instead of biting. The one with the sword has a special attack that can instantly behead Ethan. And according to the source, you’ll recognize the move once you play the game.

This part is rather interesting because it seems the segment they mention being tested seems to differ from the information from the other tests that seemed more like Ethan was in the village itself leading up to the castle, whereas this information takes place directly within.

Most rooms were bright but few bedrooms were dark. The segment was somewhere within the castle on a higher level and you needed to find a key to open a big door downstairs.

So here’s where that information gets really interesting as the claim goes into details of a boss fight you get in the playtests. Now, this does line pretty close to watch we know of the first “witch” we spoke of from the other tests that can dissolve into insects and chases Ethan and has a distinctive laugh. They also give a name to the “Witch” and refer to her as Olga.

Once opening the door the lady in black named Olga appeared and released a swarm of insects. The player won’t have to fight the insects unless she spots Ethan. She would laugh constantly whenever she spots him.

In this boss fight, players grabbed a torch to use fire to scare her insects off to get Olga exposed to shoot her. After a bit of shooting, she’ll transform into this insect/spider-like creature with long spider legs and releasing more insects coming out from her insect-like bottom. Her human remains are still there, but naked and covered with black goo. After the defeat, she melted and some parts of skeletons covered in the goo remained and she dropped an item. She also released all of her insects, to which the player will find and kill them to stop them from attacking you in certain rooms. After that, the demo ended.

The playtest featured a handgun(probably the same one shown in the developer preview), a shotgun (possibly obtained from the old man in the trailer), and an unbreakable knife. It also appears the player can obtain temporary melee weapons like an axe that can be broken off with a few hits.

According to our source, the inventory screen wasn’t the same as the Special Message video, but similar (Resident Evil 4 concept with Resident Evil 7 UI design). The game paused when viewing the inventory like Resident Evil 2 and 3 remakes. During the testing, there also wasn’t currency added and the enemies didn’t drop items. Instead, crates and vases were breakable to find items.

The old woman in robes that can be seen from the Resident Evil 8: Village reveal trailer was also mentioned by our source as being almost a merchant-like character in the game. As far as our source knows, she is not an enemy, but as our source described, “has many goods to sell and rumors to share”. They also spoke briefly on seeing some concept art but didn’t speak much on it.

It seems during the playtest many things were still getting shifted around which matches rumors from those like AestheticGamer aka Dusk Golem who say the game is still a work in progress with placeholders being used as the enemies had their dialogues added while Olga didn’t have her audio added during the boss fight but the screaming and laughing, and players were told that those weren’t her actual VA lines and are just placeholders.

After the test, participants filled out a survey and had a sensing session on their thoughts on Resident Evil Village followed by refreshments. The length of the playtest seemed to clock in around 30 minutes and testers were allowed at least two runs and it was played on Playstation 4 Pros.

Interestingly they also spoke about producer Peter Fabiano being in attendance at a specific test as he was reported as speaking about adding a new difficulty to triple the number of enemies in some areas saying, “let’s call this difficulty “Unfair” “. Though our source says he wasn’t sure how serious Peter was actually being and this part we’re unsure of how true it is.

Another small claim was that the music starting at 1:30 is the music that plays during the encounter with the large enemy seen jumping off the roof in the Resident Evil 8: Village reveal trailer.

They also said to expect a new trailer in August with the new information from Capcom. According to them, the story will become more clear, another returning character will be revealed, and there will be “another twist”.

Finally, they said a VR version of Resident Evil 8: Village will happen, but they won’t make that announcement until Sony is ready.

That’s quite a treasure trove of info there, with a lot to talk about. I’m very excited to hear about the “Unfair” difficulty, especially after Resident Evil 3 Remake‘s harder difficulties were pretty easy save for the final boss fight (which was more unbalanced than genuinely difficult). I’m also interested in the idea of the merchant dealing in “rumors” as well as goods. It might be a neat mechanic to be able to trade something with her to get tips, possibly both for solving puzzles as well as learning lore. I’m picturing something along the lines of Professor Layton‘s Picarats system, where you collect special coins and exchange them for hints (in varying degrees of helpfulness) to solve puzzles. It’s double interesting as, if this rumor is true, it leaves our boy Mysterious McVanHelsing over here identityless again (as many fans had been theorizing he was the new merchant).

I’m happy to hear that enemies (so far) aren’t dropping items. As much as I love RE4, it results in much less tense scenarios. You can run dry on Professional difficulty from time to time, but never for all that long. Keeping items and ammo as fixed elements of the world (even if the amount of each is probably determined by the adaptive difficulty) will help keep the horror pacing alive throughout the entire experience. Hearing that “Olga” is more or less a copy-paste of the Marguerite boss fight from RE7 is a bit… questionable, but it’s possible that the fight itself isn’t’ finished yet, and that they’re still working out her specifics and just wanted to see how players felt about the gist of it.

I am very intrigued by the inclusion of melee weapons, which are a rare sight in Resident Evil. Aside from the Outbreak games, the ever returning knife, and context-sensitive moments in RE6, the series has never had a system as robust for melee fighting. I’m very down for it, especially the concepts described here, which sound somewhat reminiscent of Condemned‘s combat system.

Either way, all these details are still in the rumor category, and we’ll be finding out more about Resident Evil 8 through official channels very soon. Resident Evil 8: Village releases next year on Xbox Series X, PlayStation 5, and PC.