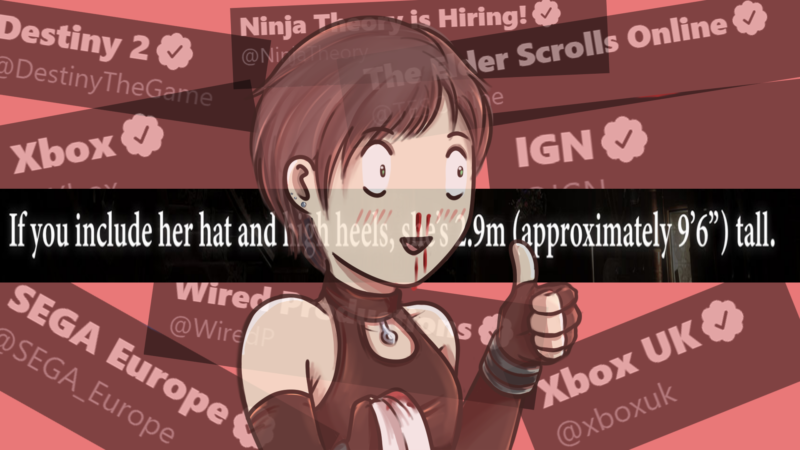 The internet’s obsession with Resident Evil Village‘s Tall Lady (now known to be named Alcina Dimitrescu) continues to dominate almost any and all discussion surrounding the new game. We previously reported on the massive amount of… attention the Resident Evil community (and beyond) was experiencing over the Tall Lady, from cosplay and fanart to thirst posting and straight-up alternative fanart, before we even had a name to go with. Since then, the interest has only doubled as more information and imagery of the character has been revealed with her extended presence in the third trailer and gameplay reveal (not to mention cameo at the end of the Maiden demo on PS5). I would’ve said that her impact on popular gaming culture was reaching Bowsette levels, but at this point, the Tall Lady just might’ve surpassed her.

The other day, Capcom saw fit to reveal the Tall Lady’s official height, in an honestly wonderful show of fandom embracement. If you thought she was ‘a bit tall’ before, wait till you get a load of her actual height:

Your love for Lady Dimitrescu is loud and clear. ?

Here's a message from our RE Village art director Tomonori Takano, along with a very curious fact you may have wondered about: pic.twitter.com/Lj4m5pN2dJ

At 9’6 (or thereabouts), the Tall Lady officially stands taller than Mr. X, Nemesis, and dozens of other creatures throughout the Resident Evil franchise. It’s pretty nuts, and the internet’s interest in her has practically doubled thanks to the corporations getting ahold of this information and in turn starting to let thirst leak out into their timelines on Twitter. Yes, it is objectively cynical marketing bullshit just latching on to a trend to try and get their brands wrapped up in fan discussion, but also — it’s funny as hell and we’re all about it. Not all of it is objectively thirsty, but you know that’s why they’re tweeting about it. The only one missing is Arby’s honestly.

Resident Evil's Twitter handle has revealed that Lady Dimitrescu, RE: Village's breakout star, stands 2.9m (or approximately 9'6") tall "if you include her hat and high heels." https://t.co/WiIBwgbMiJ pic.twitter.com/3jWXhH50NR

Hmm Fall Guys not so Tall Guys after all https://t.co/bEhxhGz0pL

hey @RE_Games we also have giant vampiric women and they should be friends
?
?? pic.twitter.com/RCoqiNsQtX

Shout out to all the 9ft+ video game antagonists out there. pic.twitter.com/RnkgG0nzHi

Thank you for the update – would also submit this important news for consideration ??? pic.twitter.com/RCo0jDORek

We heard you like 9ft tall ladies in hats. pic.twitter.com/rGjKqB5pTT

Of course, this also goes hand in hand with a cavalcade of alternative fanart, but I’m not going to post it here. You’ll just have to find that yourself. In the meantime, Resident Evil Village will be letting us meet the Tall Lady in person May 7th on PlayStation 4/5, Xbox One/S/X, and PC.

The artwork of Rebecca in the header image is by the wonderful @Tipspanot on Twitter!