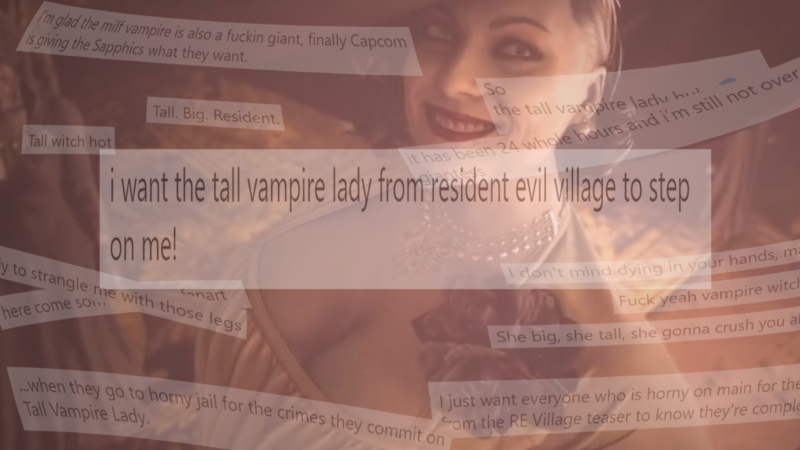 The hype builds every day as we come closer to this coming Thursday’s Resident Evil Showcase event, which promises a new Resident Evil 8: Village trailer, gameplay, and “more from the Resident Evil franchise”. We’re so hyped we spent like four hours going through the teaser video for the event frame by frame for hidden details. One detail that wasn’t quite so hidden was the uh… extremely tall woman, who appears to be the game’s primary antagonist. We don’t have any context for her as of yet, although this teaser is the first time we’ve gotten a really good look at her. Hoo lawdy is she tall, and her old world gothic countess vibe has sent the internet on fire.

i want the tall vampire lady from resident evil village to step on me! #ResidentEvilVillage #REBHFun #ResidentEvil #RE8 pic.twitter.com/SRAQBybMTg

If you see this; QRT with your art, chill out, and have some fun!!

Eh, might as well. Since we're inching closer to a release date.
This was done last year? https://t.co/h6mJMc0PJW pic.twitter.com/86N2OZCAN6

Tyrant, but make it fashion!

I don't know about this tall vampire lady, but she got my attention when i saw the trailer. Here's her fanart. Enjoy! ?❤️ @RE_Games #fanart #ResidentEvil #ResidentEvil8 #ResidentEvilVillage pic.twitter.com/UYQF4TiyVL

She big, she tall, she gonna crush you all! Haha vintage aesthetic is kinda my thing so I had to give large vampire lady a goooo! #REBHFun #ResidentEvilVillage pic.twitter.com/zTBvFgAIXK

An attempt was made! I don't have any clothes that really resemble the tall vampire lady so treat it more as closet cosplay rather than anything else! #REBHFun pic.twitter.com/PrKC2BJsgH

I've vaguely seen the trailers so far but this is basically Resident Evil Village right? pic.twitter.com/S23miwCZFS

I wanted to get exactly two (2) things out of my system#REBHFun #RE8 pic.twitter.com/RLIPbBxyCK

I can smell the critical acclaim pic.twitter.com/khrzjXaEPl

it has been 24 whole hours and i’m still not over the big titty giantess pic.twitter.com/UiUFZzwyOq

i want the RE lady to strangle me with those legs and gag me with that hat pic.twitter.com/pngxtKuprp

aaaah i am so freaked out please do not chase me i definitely do not want to get pinned against the wall by tall vampire https://t.co/UcX3HIyvpq

This isn’t even counting all of the other artwork there is out there of her, which I bet you can find on your own if you look hard enough. Well, maybe not that hard. This phenomena of excited horniness has become so omnipresent that even the official Resident Evil Twitter account got in on it:

That about sums it up. Every few minutes there seems to be a new piece of art depicting her as… overwhelmingly powerful, let’s put it that way. I can only assume there’s going to be even more after we actually get more footage of her during the Resident Evil Showcase event on Thursday. So I guess keep ‘RE Village Tall Lady’ on standby in your search history to keep up to date, and if you have any fanart that you want to show off, please do!