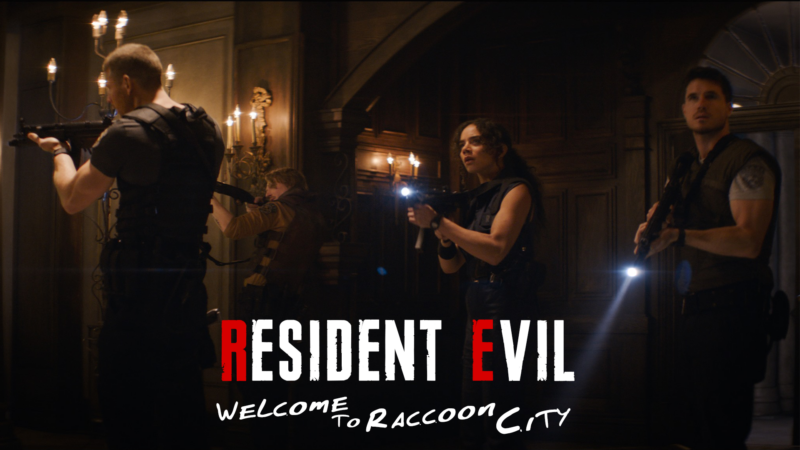 After nearly a year of waiting, we finally have our first looks at the cast of the new Resident Evil film reboot, Welcome to Raccoon City, in costume. The results are a bit mixed. While the sets have been a joy to pour over for their shockingly geeky attention to detail (not to mention actually building the physical R.P.D. main gate), it looks like the costumes have taken a bit of a hit for the team, sadly. Director Johannes Roberts also gave an interview to accompany the photos, which we’ll include excerpts from (the whole interview can be found over on IGN). First up, we have our S.T.A.R.S. Alpha team, although it nixes Barry and Jospeh for Richard: 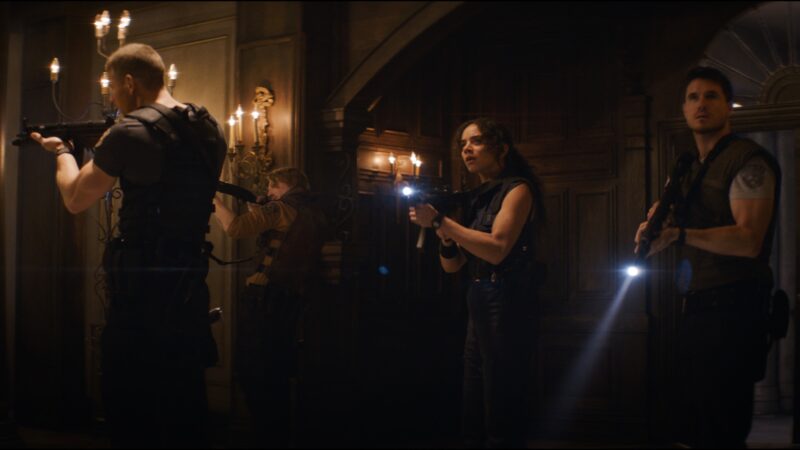 Generally disregarding all but the basic color scheme, our favorite S.T.A.R.S. members have been completely redesigned, with Chris (Robbie Amell) being the only one who appears to have been left alone. While Richard and Wesker (sans sunglasses, which I’m betting he’ll get later on) are passable, fans are already pretty upset about Jill’s look. Discarding her beret and shirt, Jill has strangely been given an entirely new hairstyle and navy vest (although it looks like her shoulder pads might be kinda integrated into it?). It’s the most shocking visual departure of anything we’ve seen so far from this film yet.

All that said, director Johannes Roberts explains that, while the costumes might not have been what we wanted, he’s hoping that we will like what they did with the writing:

They are not just cosplay characters who have the exact hair and costume of the characters. I think previously everything had been all about the Alice character – which was never in the games – and the game characters that did appear like Jill, Leon, Claire, and Chris did so as kind of supporting cameos. Jill and Leon in this movie are equal leads along with Claire and Chris and Wesker.

Jill was such a fun character to play around with – a sort of live-wire, small-town girl – she’s kick-ass but not in a superhuman way. You really feel scared for her when shit goes down. Hannah John-Kamen really brought her to life!

On another note, it looks like they may have actually built the mansion’s main hall, with the same level of detail that they’ve brought to other set facades we’ve seen so far. You can see the mansion’s entryway in the background here, and the director goes into more detail:

We worked hand-in-hand with Capcom on this movie… to the point that we actually got blueprints from them on the designs of the Spencer Mansion and Raccoon police station in order to recreate them as perfectly as we could. We even have the exact artwork up on the mansion walls. 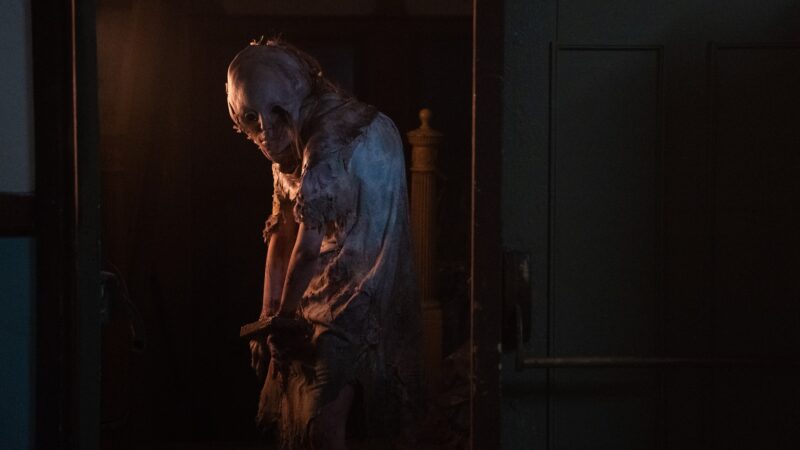 Next up we have one of the film’s primary creature features: Lisa Trevor. We’ve seen the performer who’s under the mask here doing a bunch of stuntwork and even partially in costume before, but this is our first look at the whole costume put together. While I was harsh on the S.T.A.R.S. costumes, with creatures its worth remembering that we’re never meant to see things like this with this much clairity. Whether it’s the titular Alien costume from 1979 or Nemesis from 2004’s Resident Evil: Apocalypse, creature effects always look bad when they’re just standing there in photos. It does look like she’s been changed a bit herself, although remaining closer to her in-game look. The cowl is difficult to quite make out, as it’s clearly not her real face, but whether or not it’s meant to be one of the faces on her cowl, or something that’ll receive a digital effect later.

Roberts expands on her as well, with a startling (well, if you hadn’t read leaks) character revelation as well:

Lisa Trevor is actually quite a pivotal role in the movie. I was always fascinated by her when playing the remake of the first game. I found her character both disturbing and at the same time strangely haunting. When we were discussing how to bring this story to life it was one of the elements that I really wanted to feature strongly as she has never been in any of the filmed versions of Resident Evil. I wanted her to be a three-dimensional character, not just some creepy specter. We cast Marina Mazepa, who had just done Malignant for James Wan and really worked hard in bringing this character to life in a way I think the fans are going to love so much. She’s terrifying but also tragic. In the movie, we really connect her to Claire Redfield’s story, starting with the orphanage where Claire grew up.

Fans have been quick to recoil from the idea of a childhood connection with Claire (and presumably Chris), but I understand Roberts’ reasoning. Lisa, while tragic and deep in the games, is only so because of piles of in-game documentation, a tremendous amount of backstory involving the history of the mansion, her father, the CEO of Umbrella, and a ton of fiddly details that a two-hour movie simply doesn’t have time to explain with any level of detail or nuance to us. Plus, what’s tragic to a player doesn’t quite carry the same impact to a viewer — giving Lisa a personal connection to the characters might seem like a weird leap, but it has a chance of making the character resonate more with a casual audience who won’t have the Wikia open on their phones.

Along with this, I’m really happy to hear Roberts talk about the creature effects, which sound like they’re going for something very classic feeling:

There is actually quite a lot that has never been in any previous movie to be honest which is exciting. And even the stuff we have seen before – I won’t give it away but there are some iconic creatures fans will be so happy to see – we have really gone all out in making them feel like characters (…) John Carpenter is the master of this. Watch The Thing — each creature moment is treated as an artwork — you get to marvel at its entire glory. It’s never just hundreds of things thrown at you.

There is real personality and life in each creature set piece. And the character reactions then just feel so honest and real. And the fear is then very real. I very much had this in mind when shooting Resident Evil – especially when recreating moments like the turnaround zombie from the game – as well as when things go REALLY crazy toward the end – I really invite the audience to revel in the creations we have put on screen.

Confirmation that the Headturner (a favorite zombie of mine) will be showing up is extremely exciting, and things we both have and haven’t seen before? Lickers and Hunters would be my guess, but Mr. X and G (especially since Birkin is confirmed to be in the film, played by Neal McDonough) would be awesome. 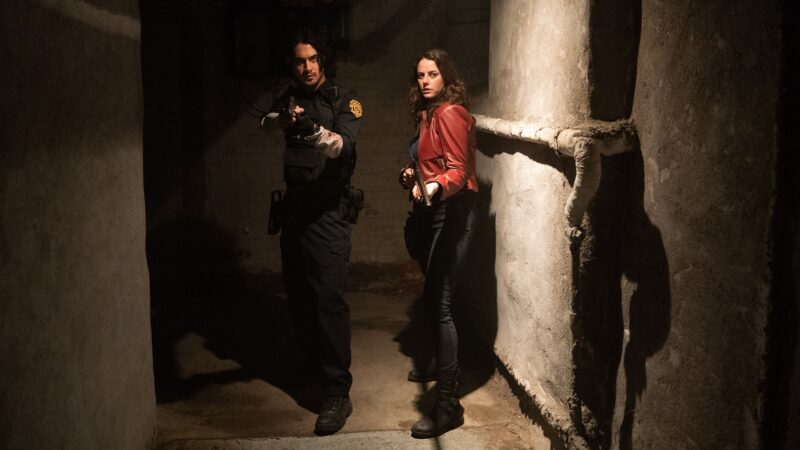 Finally, we have Leon and Claire. We’d previously seen Leon in costume thanks to the actor’s TikTok, but here we get a look at the entire outfit. Both characters are sporting their 2019 REmake 2 looks, which is unsurprising, and at the very least they seem to be pretty accurate, unlike the S.T.A.R.S. uniforms. Claire strangely doesn’t have her hair in a ponytail despite that being like… her whole look, across all but about 5 minutes of her appearances, but I’m betting she ties her hair up later on.

Leon Kennedy was interesting because in many ways he was my way into the movie as a writer – I sort of saw the story through his eyes. I wanted to move away from the buff action hero that Leon has become in the later games and return to the Leon Kennedy of his very first ‘rookie’ incarnation in the Resident Evil 2 game. In this movie he is not at all an action hero – he’s slightly out of his depth, very hungover, and cannot believe the s**t that is going down on his first day. The events of the film help create the ‘hero’ Leon they know from the games.

There is definitely a Carpenter vibe to his character. When I was writing him I had sort of a cross between Jack Burton and MacReady in my mind! It was probably the trickiest role to cast to find someone who could carry that off! Avan Jogia really nailed it. He’s so wonderfully disheveled and out of his depth in the movie.

It’s interesting to see that they seem to have gone with Leon’s original backstory, of having arrived late due to getting drunk the night before, although it remains to be seen what his reasons were (in-game, his girlfriend broke up with him).

That’s all for now, but hopefully, this means a trailer is right around the corner. Resident Evil: Welcome to Raccoon City is due out November 24th in the US, November 25th in Australia, and December 3rd in the UK.