In a surprise announcement from Capcom and Konami, Satoru Iwata of Capcom fame has unveiled Resident Evil x Silent Hill. “Capcom has seen great success in our vs Capcom games. With Street Fighter x Tekken, we really want to capture the essences of what makes both franchises great and unique and combine those elements into a new type of fighting game. Fighting game fans won’t be getting all of the fun though. Today we have decided to announce true horror in Resident Evil x Silent Hill.”

What an exciting premise indeed! Iwata continues. “Recently, we here at Capcom have been handing out our big-name franchises out to smaller developers to produce more quality titles quicker. After the enormous buzz and reception to Ninja Theory developing DMC and Slant Six developing Resident Evil: Operation Raccoon City, we decided it was time to work with someone with a similar business agenda. Silent Hill has been our competitor in survival-horror since the late 90s. We now have something in common, we both hand-out our big horror franchise titles to third-party developers. It started as small talk but before you knew it we both were on board with the idea. However, we knew we had to keep true to form and get a third-party developer to produce this exciting concept. The idea sat around for a few months before the company for the job contacted us. We knew right from the get-go that these were the men we needed to appeal to American audiences. We offered them a budget and time frame to complete the project. They said they could do it in a third of the time. Resident Evil x Silent Hill will be developed by Stellar Stone.” 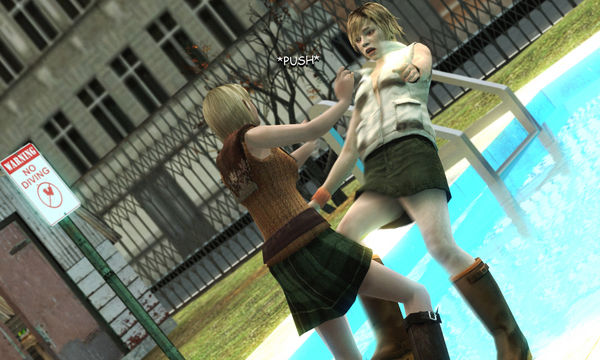 It’s more likely than you think.

We also have the official press release for the title.

“Today Capcom and Konami are proud to announce Resident Evil x Silent Hill! It is in development for the Nintendo Wii and 3DS.

Resident Evil x Silent Hill is a collaboration between Capcom, Konami, and the California based studio Steller Stone and is scheduled for release December 21st, 2012. Both Resident Evil and Silent Hill celebrate their long-running achievements, the 15th anniversary of Resident Evil as well as the 10th anniversary of Silent Hill 2, the only Silent Hill game to matter (as evidence of all future Silent Hill titles borrowing only from this title). This latest offering will take the series in a completely new direction and offer a style of gameplay yet to be seen from either franchise.

Resident Evil x Silent Hill delivers a true Real-Time Strategy Racing experience set in new locations loosely based off of the Resident Evil & Silent Hill universes in a reinterpretation of the events depicted in fan favorite titles Resident Evil: Survivor and Silent Hill Arcade. Having the setting loosely based off of both universes not only provides a rich backdrop to strategizing and intense speeds, but delivers a unique and thrilling quintuplet threat battle. Monsters created by the inter-psyche of our heroes and their regrets & Zombies and Bio-Organic Weapons (B.O.Ws) add to the mix as players not only compete against an opposing squad of NASCAR Racers and NASA Scientists but also tackle a fifth unpredictable element, the very heroes of the games themselves, creating a brand new style of gameplay and breaking the conventions of traditional Real-Time Strategy Racers.

It is November 31st, 1998 and the action centres once more on the ill-fated Ecliptic Express and the horrific consequences of the deadly leech outbreak. With a cover up required, Umbrella orders an elite team into the Ecliptic Express to guide the train out of town. A door to nightmares opens as they ride the train out to a nearby lakeside town, Silent Hill. Hearing of this plan, the US Government dispatches its own NASCAR Racers and NASA Scientists to uncover any evidence that exposes the cause of the viral infection and Umbrella’s actions. Players take on the role of an Umbrella Janitorial Support (U.J.S.), competing alone or in four player co-op in a battle against all the competing forces at play in Silent Hll.

Expect the return of original Resident Evil and Silent Hill enemies such as Nurses in super-short miniskirts, iconic landmarks such as the random Volcano at the end of Resident Evil 5 and fan favourite characters, including Eddie Dombrowski and Steve Burnside, who you have to rescue and protect in challenging and inventive escorting missions. Players will experience a retelling of classic moments from the Resident Evil and Silent Hill films and watch the events unfolding from the menacing perspective of the Umbrella Janitorial Force, giving fans the chance to clean up the mess of the messes at Raccoon City and Silent Hill.

In addition, Resident Evil x Silent Hill will deliver a number of competitive online multiplayer modes. Each one of these have been inspired by industry-leading titles such as Call of Duty and Gran Turismo and their already established modes, featuring reskinned locations loosely based off of real Resident Evil and Silent Hill locations that could only exist in the deadly and twisted Resident Evil & Silent Hill Universes!”

Call us excited. Other details also confirm that you take turns between action-rounds to attack enemy forces and the driving sequences use the largely popular ‘Big Rigs: Over the Road Racing’ engine. Also, they changed all of the vocal cast. Again. We will keep you up with this exciting story as more develops!