Resident Evil 5 followed what many consider one of the finest games of all time. A cliche title to pass around, but it’s predecessor definitely earned it. When Resident Evil 5 was announced gamers were treated with a teaser that depicted, series veteran, Chris Redfield in unfamiliar territory with shadows of what we thought at the time to be zombies closing in around him. Flash-forward to see that Resident Evil 5 turned out to be completely different that what it initially seemed as. Gone was the sense isolation present in other Resident Evil titles, instead, replaced with nerve breaking action that can be experienced with a friend, on the same couch or on polar opposites of the globe. Taken on its own, Resident Evil 5 proved to be quite an action packed experience that succeeded in following the main arc that made up the entirety of the series. On the other hand, when comparing it to Resident Evil 4 or any other of the classic entries, one may be met with a mixed bag of feelings.

A year after the initial release, Resident Evil 5 Gold Edition was released, a sort of, Game of the Year edition for a game that, unfortunately, didn’t receive such accolades across the board. This new edition included the full campaign along with the dlc episodes: Lost in Nightmares and Desperate Escape, both of which shed more light on the events of the main game. New extra modes were also added that brought some change to the game’s mercenary mode as well as some new characters to choose for said mode. And of course, costumes galore, ranging from awesome, to obscure. The Gold Edition added more replay value to a game that was already highly replayable due to it’s tight controls and engaging gameplay. Then Sony unveiled the Playstation Move and announced Resident Evil 5 Gold Edition’s compatibility with the new peripheral.

The Playstation Move is now in shelves across America and soon will be available on a near global basis. Gold Edition owners may have noticed a patch that can be downloaded upon booting up the game. Thus, motion control comes to Resident Evil proper once again, this time on a fully HD platform. Does it deliver in making the experience better? Can it even possibly change the minds of those that weren’t all that impressed with the game in its initial run? This may even end up answering this generation old question of motion controls and if they do in fact make an experience more immersive. 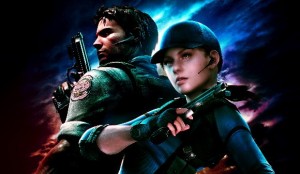 It’s important to first note that only owners of the Gold Edition will be able to experience the game with Playstation Move controls. With that being said, another heads up, and to save potential buyers some money, one doesn’t have to purchase all the pieces of the Playstation Move puzzle in order to be able to play the game with motion controls. There’s no significant need to look any further than just the Playstation Move “wand” and the Playstation Eye. Both which can be purchased separately or in a bundle with a game. The lack of a navigation sub-controller won’t mean anything as long as you don’t mind holding a dual shock solely from the left side, where the left analog stick, directional pad, and left triggers are situated.

This leads to the button lay-out. Like aforementioned you can use the left side of a dualshock controller and those buttons will correspond to the same commands as in a motion free play-through of the game. Using the navigation controller though takes a bit to get used to. First off, The analog stick, feeling more responsive than that of a dualshock, controls movement as well as camera movement when in ‘aiming’ mode. The directional pad serves as hot keys to quickly equip selected herbs,explosives, or weapons. The “x” and “O” buttons could be ignored in the context of this control set-up.

The actual motion controller, or “wand”, has a different button lay-out than that of a dualshock. You’ll still find your iconic “X”, “square”, “circle”, and “triangle” buttons albeit arranged differently in shape. Meaning, the buttons all take up a corner of a square that surrounds the main Action Button instead of a diamond shape found in the regular dualshock. While a minor alteration, gamers who previously didn’t have to look at the actual buttons to input commands may have to re-adjust themselves.

With all that being said, do the motion controls actually work? 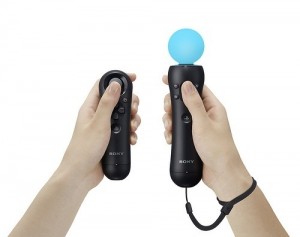 You hold the trigger on the back of the wand and a reticule will show up on the screen and here’s where the beauty of Sony’s new controller comes in, and where it differentiates this game from Resident Evil 4’s motion control edition. The aiming feels extremely intuitive, and it’s also really accurate matching every movement of your hands. There may be some moments where the reticule isn’t exactly centered upon entering “aiming” mode, but these are minor issues and don’t falter the overall joy of pulling off head shots with ease thanks to this controller’s capabilities and overall technology employment. The fascinating thing is that, you don’t even have to be pointing your Move controller right at the screen to aim at foes. Quite simply hold the trigger and even if your motion controller is facing down, away from the camera, the Playstation Eye still detects its movements and you’re still able to intuitively shoot enemies.

Using the knife works well after coming to the acceptance that swiping the controller doesn’t translate to a knife swipe simultaneously. There’s a small pause between the actual motion input and the on screen output, but once again, it doesn’t hurt the overall experience. Reloading also works as it should, by simply giving the controller a good waggle when holding the trigger you’ll reload you ammunition. Once again, it’s worth noting that at times there was a delay between the input and the on-screen outcome, but these aren’t by the multitude. It’s a new technology, for Sony, so there are bound to be some hiccups. 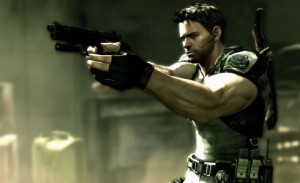 As implied, aiming, and consequentially, using the games many weapons works extremely well. When it comes to the non-scope compatible weapons, that is. It’s not that the rifles are worthless, far from it, it’s just that the lack of an ability to aim and control the cross-hair with the motion controls is somewhat bothersome. Expectations may be that to zoom in and out one would simply just have to move the controller closer to the screen or away from it, respectively. That’s not the case. And aiming the game’s rifles, as well as turrets, require you to only use the analog sticks. It’s more than a minor complaint but it doesn’t mean one should stay away from play this with the Move, not at all.

There’s no need to touch other grounds for this review, it’s only relevant to keep it strictly based on the controls and how the Playstation Move peripheral affects the overall experience. If eager readers want to know more about the actual game sans motion controls then check out our official review of the initial release here. The review score here will be given to Gold Edition of the game based on what the Move brings to the table.

Resident Evil 5 Gold Edition, now with Move support, is the ideal way to play this title. For those not planning to purchase Move anytime soon Gold Edition serves the same role, sans motion controls. But for those early adopters that are looking for a hardcore title to play and truly show off the Move’s capabilities, to a limited, but yet intuitive extent, then look no further. Sure there are some things to be desired and some minor hiccups, but honestly, it’s to be expected. Not just due to the fact of this being a new technology but also because motion controls were quite simply tacked on to Resident Evil 5. It wasn’t built from the ground up with motion controls in mind. Perhaps when a future iteration in this franchise hits with that control style as it’s main focus then fans, and gamers alike may have something quite special. Until then, Resident Evil 5 Gold Edition with Move compatibility makes the experience better than it was before. Answering the question posed earlier. Yeah, motion controls can in fact make existing franchises better by enriching the experience through a more profound sense of intuit Now go and boost your Mercenaries score exponentially, all thanks to the Playstation Move.