Roger Craig Smith is a talented man. He’s Ezio in the Assassin’s Creed series, the latest Sonic, and the latest Chris Redfield. I had a chance to interview the man behind the characters, and it ended up to be a pretty fun interview. The guy loves his eggs! 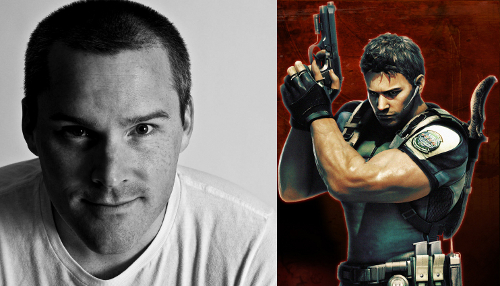 ROH: Had you been a Resident Evil fan before playing Chris in Resident Evil 5? If so, how far back does your experience with the series go? All the way to the original game, the newer ones, or somewhere in between?

Honestly, I didn’t have to much experience with the RE franchise prior to landing the role of Chris’ voice. I had dabbled with RE4 a little bit, but I didn’t get too far into it at that time. I know this kills fans of RE to hear that one of the character voices really didn’t know to much about their beloved series, but I was a bit of a loser in that way. I just didn’t get on the RE train until I was at about the halfway point in the recordings for RE5 and I remember asking Liam O’Brien about the series. I was like, “Hey, this is gonna be kind of like, a big game and stuff, eh?” I think he responded with, “Duh.” So, yeah, I was the only guy on earth that didn’t realize the scope and popularity of Resident Evil. Not one of my proudest moments…

ROH: Did you feel that voicing a character who is nearly twice your size in muscle intimidating or that you might under-perform? (Joke question!)

I’m only 5’5” tall, so over-compensating for things comes naturally to me—So I can totally relate to Chris. Given the size of Chris’ arms, I’d say he’s clearly over-compensating for something, I just don’t know what. Daddy issues? Wasn’t hugged enough as a kid? Was bullied a lot and is gonna make the bullies pay someday by squishing their heads in his biceps? I dunno. I just know someone spends a little too much time in the gym and he might wanna back off the bicep curls for a bit and focus more on anger-management. Maybe yoga. Meditation. He seems a bit stressed at times, am I right? Y’know, he gets to a door before Sheva and just instantly starts yelling, “HURRY!” It’s like, dude, relax a bit. Gotta find your happy place, Chris. You need to just chill…

ROH: What were your views on the movie version of Chris played by Wentworth Miller?

Sadly, I’ve not seen the movie version. I’ve heard mixed reviews from lots of folks. Either way, it keeps the franchise alive and relevant, which is great for the games—which is really all I’m concerned with.

ROH: Since you’ve reprised Chris in the most appearances that any of his actors have to date, is it safe to assume that you are the permanent voice of Chris Redfield?

Wow, I wish. This is one of those situations where the reality of the business-side of this industry comes into play. I’ve got ZERO control over what anybody does with this character. I’m an actor hired to do a job and lots of decisions are made by lots of different people for lots of different reasons way before I step into a booth to voice a role. While I’m immensely proud of the work I’ve done and honored to have all the opportunities I’ve had with the character of Chris, I’ve got no say in who gets to voice the character. My job is to show up ready to go when the phone rings and hopefully the phone keeps ringing. So, I’d love to say I’ll keep on as Chris, but I’ve got no clue if/when there’s gonna be another phone call for work as Chris.

ROH: Have you had a lot of contact with fans so far? Have you been received well into the Resident Evil community?

Love the fans! You guys are some die-hard folks and without you guys this franchise would be nothing! It wasn’t until my first convention after the release of RE5 that I saw first-hand how passionate the fans of this series really are. It’s no wonder they can be successful with RE movies, games, spinoffs, etc. There’s a massive group of fans that support the brilliant minds that have created this world of RE.

As far as how I’ve been received, I’ve felt very welcomed at the conventions. But, I suppose that’s from the fans that like what I’ve done. I’m sure there are folks out there that dislike my portrayal of Chris, just like there are folks out there that do like what I’ve done. In general, though, it seems like a lot of folks were pleased with RE5 and nobody’s been unkind or rude or anything like that. So, I’m thrilled to be a small part of this RE universe and it’s awesome meeting fans dressed as the characters from the game at cons. Lots of Weskers at these things, too. Everybody always likes the bad guy, eh? And to that I say, “Suck on this, Wesker.” Man, that’s just a rude thing to say to a dude before launching a rocket into him. I mean, the dude was in lava. Ya gotta add to his torment? Again, relax, Chris. Calm down.

ROH: What are some tips that you could give to someone that wants to be in the voice acting business like you? Like where to start?

Education. Take a class and get to know the ins and outs of commercial voice acting. There are lots of ways to educate yourself about the world of voice acting. The internet is a great way to start researching. So, get some education under your belt and then the next bit of advice—GO FOR IT. At some point, you need to go out and just start trying to drum up your own jobs. You’ve gotta learn from experience, make mistakes, and keep falling forward. Some folks stay in the educational-phase of getting started way too long. Eventually, you’ve got to just take a deep breath and see how the industry receives you. You’ll learn soon enough if you’re cut out for voice acting.

ROH: We know you can’t say much about Revelations, but how’s recording for that going?

ROH: Being a voice actor of many voices, have you ever just sat down and had a discussion as Chris, Ezio and Sonic?

Ya know, I tried that once at a Starbucks. Yeah, I was waiting for a friend, so I sat down with my mocha at a table in the corner. My buddy wasn’t there yet, so I figured, “might as well entertain myself by carrying on a conversation as all three of my highest-profile video game characters, right here in this public place.” So, after my friend had to bail me out of the local mental hospital, I realized it’s not worth it to try that.

ROH: Have you voiced any other characters in the Resident Evil series so far? If not, what type of character would you like to voice in addition to Chris?

Wesker. Everybody, including me, loves the bad guys.

ROH: Just how many eggs DO you need?

C’mon! You can never have too many eggs. They’re incredible and edible. Gotta love ‘em. Watch out for the brown ones, though…

Thanks to Roger form giving his time for the interview.