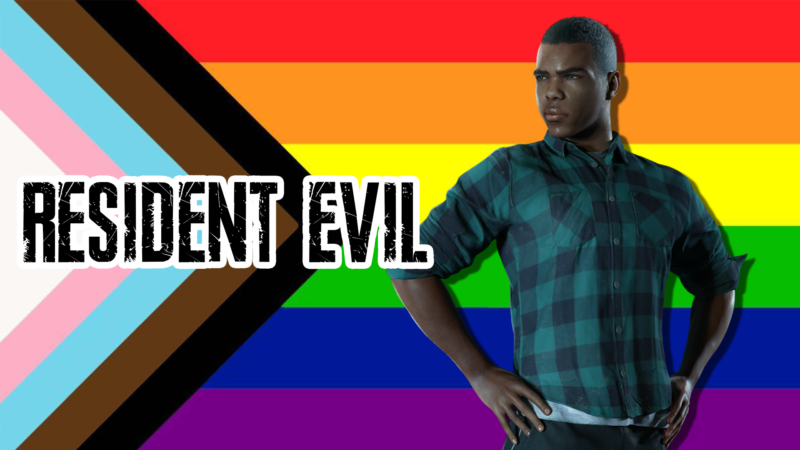 (Update) Turns out Tyrone is actually Resident Evil‘s third subtextually gay hero! Nadia from Resident Evil: Vendetta was confirmed as a lesbian in the film’s commentary. I hadn’t been aware because I uh, hate that film. Still pretty cool though!

Happy Pride Month, and a very warm round of applause for Resident Evil: Resistance‘s game director, Al Yang today. As a way of celebrating Pride Month, Yang kicked off the night with a twitter thread regarding his interest in including LGBTQ+ characters in the games he’s a part of, and in this case, specifically Resident Evil. While his latest title, Resident Evil: RE:Verse, has no story and sees classic characters used as class-based avatars, Resistance flourished thanks to the game’s charming and likable characters. From the delightfully dickish Daniel Fabron to the sneering punk attitude of January Van Sant, each and every one of them was lovable and quotable to the nth degree. One character, however, turns out to have had an element kept from us this whole time; Tyrone Henry, a firefighter turned survival leader, is gay! From his thread:

Happy pride everyone! In light of this month I want to share a little bit about how I approach writing characterization, in particular for one very special character in Resistance. It’s basically impossible to tell, but the character setting for Tyrone is that he is gay, but the goal was to write this without it becoming the sole basis of his character. The nature of PvP only games makes revealing this kind of info sometimes feel pretty abrupt.

I feel the problem with a lot of LGBT characterization is that it’s their defining attribute (unless that is your intent for a particular reason). For me, it’s not about writing a gay character, it’s about a character that is also gay. I always create a pretty comprehensive list of both major and minor character attributes, like place of birth, childhood, hobbies, pet peeves, mannerisms, etc. etc. that players usually will never see. It’s important to set these as it helps immensely with any future writing.

For better or worse, in-game characterization in PvP games like Resistance exists mostly in the form of dialogue and maybe some text but it’s hard to fully flesh them out. And as you’ve noticed, we have some fun characters but they’re pretty cartoony and straightforward. In addition, we don’t have the luxury of having constant transmedia lore drops outside the game like Overwatch / LoL does, so in the end even though we wrote a bunch of lines reflecting this for Tyrone, they stood out and didn’t feel natural as part of his dialogue rotation. My favorite example of a well written LGBT character is Krem from Dragon Age Inquisition, where it is a central part of his personal story but it’s not their defining characteristic. You only find out over time, once they’ve been firmly established to you.

In addition, it’s always important to solicit feedback from the group you’re writing for if you’re not a part of that group yourself or even if you are, extra viewpoints and feedback are always, always welcome and helpful.

This has already been deeply appreciated by vocal LGBTQ+ fans, who have been desperate for representation throughout this long and storied series. Prior to this, only one other gay character was confirmed for the Resident Evil universe, Crispin Jettingham, AKA Dee-Ay. Dee-Ay (or D.A., as in Don’t Ask). That said, all three LGBT+ characters in Resident Evil were revealed as being gay after the fact, and never stated during the actual game. Many have been quick to criticize the ‘reveal’ as being cowardly and with minimum effort, not to mention the timing of this information being over a year after the game’s release (and during pride month) is a bit pathetic.

Capcom has always lead the charge on LGBTQ+ characters in gaming, starting with the first trans/genderqueer characters (Poison and Lilith), to multiple gay and bisexual characters (Like Aura Blackquill and Morrigan Aensland). While Resident Evil doesn’t have as much, obviously, it’s still wonderful to know that the series hasn’t avoided it entirely either. More representation is always a good thing, and we’re happy as hell to see it — but in the future, we’re hoping that Capcom can do better with this franchise than this, even if it is great to see at all.