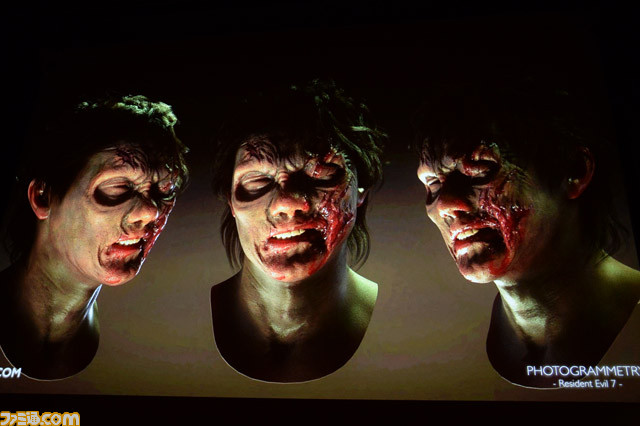 (UPDATE): We’ve now got some video footage from the show, showing off how some of this stuff looks in motion. I’m actually a little blown away, there’s at least one shot that I genuinely thought was of an actor when I saw the screen shots, but apparently it was an in-game asset!

Holy wow, this is way more information than I was expecting, all of a sudden at least.

Today at CEDEC, or the Computer Entertainment Developers Conference, Capcom showed off a cubic buttload of new Resident Evil VII: Biohazard content, all in the name of demonstrating the new system they’re using to create as close to photo-realistic visuals as possible. The technique, called Photogrammetry, is a way of photographing objects (typically used for mapping large areas, like for geography, and can even be used to map out collision points in test car crashes) to create exact recreations of surface texture and points digitally. It seems to be a fairly new technique for game development, mostly starting to really pop up around 2014 with games like The Vanishing of Ethan Carter. Well, we’re getting it in a big way with Resident Evil VII, which is purported to use this photo-to-model technique for a little over half of the game’s assets. Of course, there’s still traditional game 3D modeling for the rest of it, and things that the Photogrammetry has trouble with, like hair, but it’s a great way to create instantly photo-realistic models for a game to then build on. 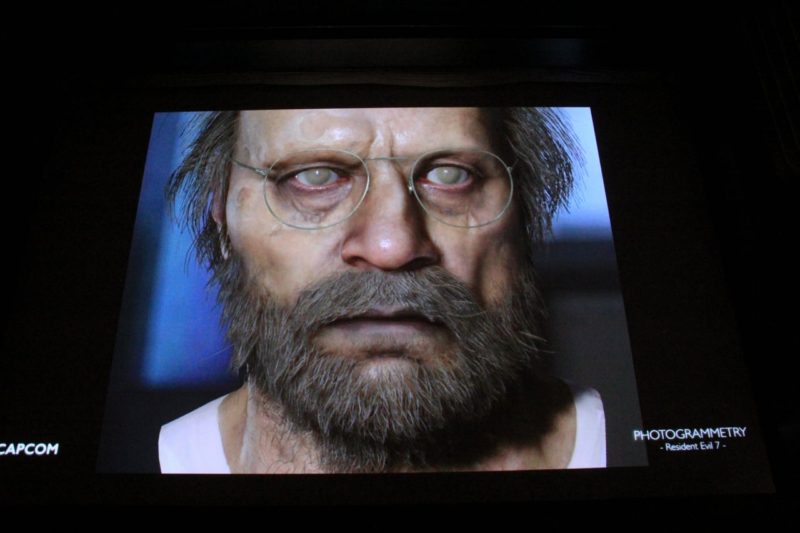 So, as such, Capcom has built an entire 3D scanning studio, not just for RE7, but for future projects built in the RE Engine (REmake 2, anyone?) and beyond. They’ve created real-world makeup and creature effects to scan into the game, and we get to see quite a few of those in the presentation. Taking actual actors and applying Hollywood level make-up effects to them, they then scan them into the game. They show off the real world Jack Baker, or as we know him, The Family Man, as the actor gets his make up done and then scanned. Seeing the creepy, nasty looking Family Man as a real person is… honestly super unsettling. We get to see both human and post infection Family Man here too, which is interesting. We only ever had that photograph of him and his wife, as well as that second or two shot from the end of Beginning Hour, so it’s awesome to really get some detail on what this new threat looks like. 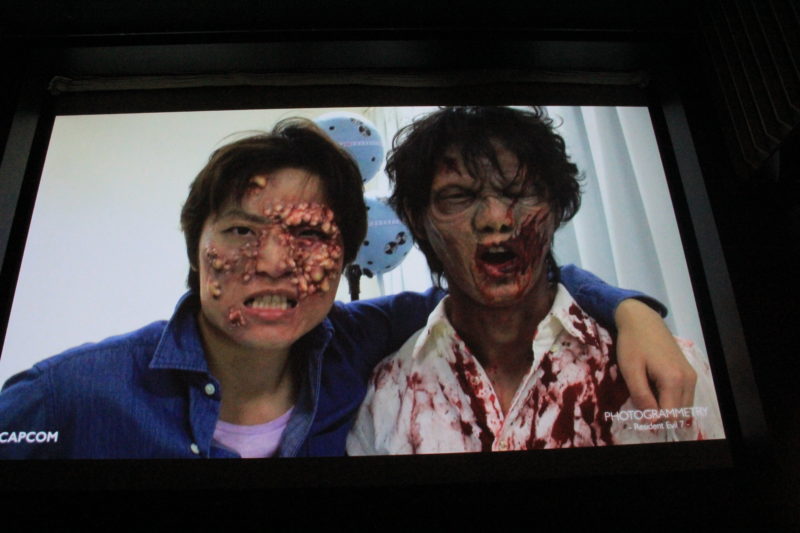 Of course, the big draw here for hard-core RE fans is the major revelation this demonstration has dropped, and that’s the return of zombies. Yep, you read that right – RE7 looks to be, for sure, bringing back our good old friends the Shamblers. Several of the makeup effects shown are very clearly zombies, and it’s taken my already pulse-pounding excitement up to a level where I think I’m literally just going to start steaming from my ears. They also tease that not just zombies, but also classic BOW type creatures, including one that is apparently so gross it’s textures are constructed of scans of different pieces of meat they photographed at a meat processing plant. Be still, my heart. They apparently also used claymation in some instances to create the more unbelievable creatures that will be appearing in the game.

As a huge fan of 70’s-80s horror, this whole approach has my hopes soaring, with memories of the great practical effects horror films like The Thing, Alien, and Day of the Dead. Resident Evil‘s creature design has almost always been incredible, and this new level of dedication to realism is amazing sounding (and looking, from what we see here). 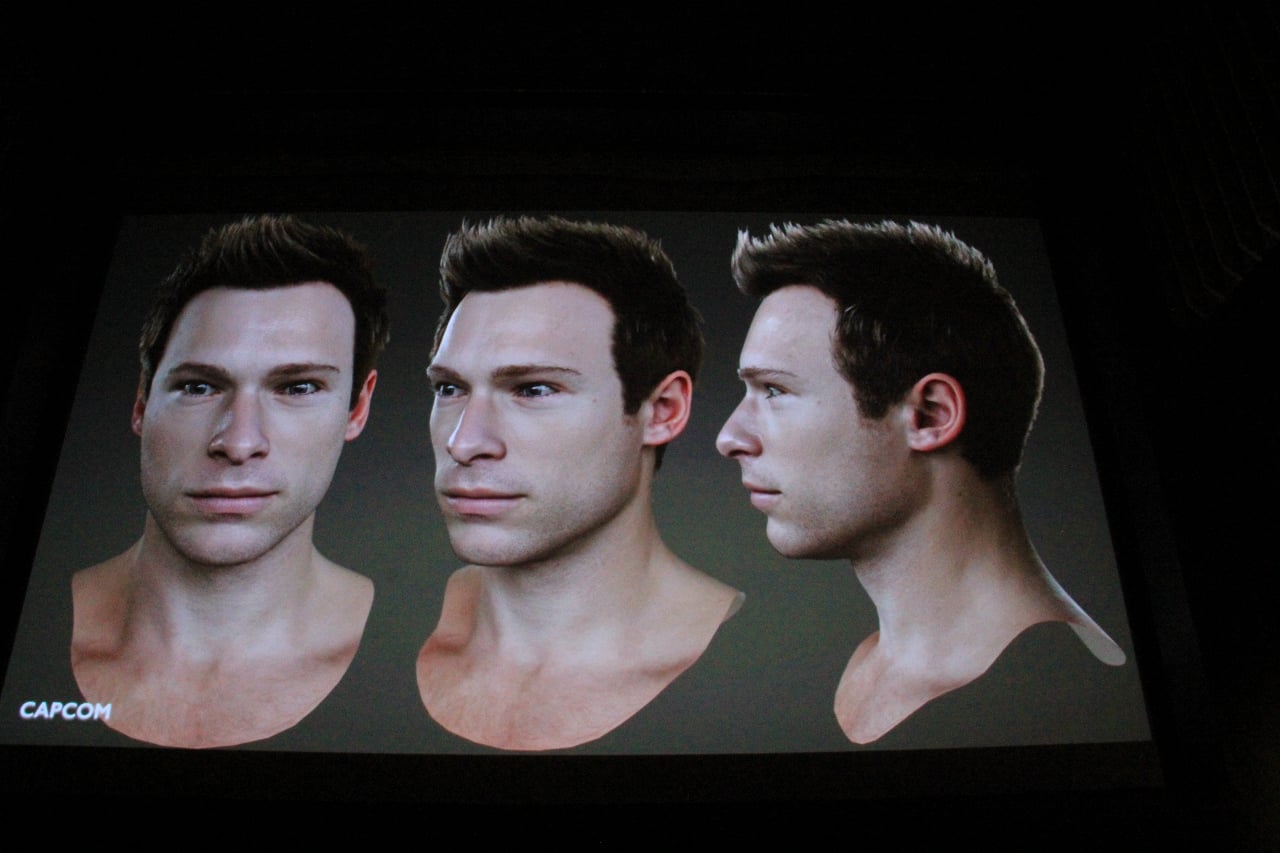 They also show off what will probably be the game’s cast of characters. We obviously can’t say for certain whether these characters shown off will be in the final game, although we do see Pete the Weekend Sub. There’s a few new faces here, from what I can only assume is Ethan, the player character that was outed by an ESRB rating yesterday. He just looks a little too… well, player-charactery, although again, who knows. Obviously, the game is in first-person, which means we won’t be able to see his face by default, but with such a level of dedication to realism, there’s every chance we may get to see ourselves in reflections or maybe even in the video segments. Anything is possible. 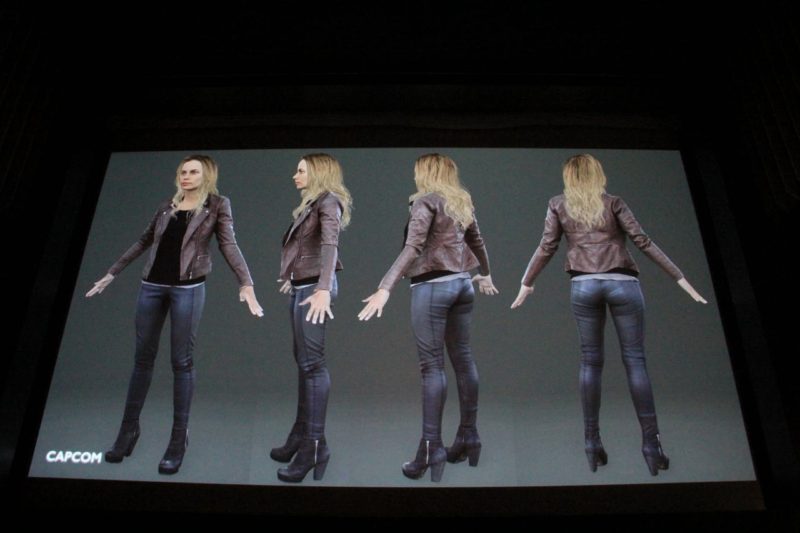 There’s also a blonde woman, who for the moment I’m just going to assume is Mia, from the Lantern Demo. Mia is presumably Ethan’s missing wife, so we’ll probably be seeing lots of her throughout the game. 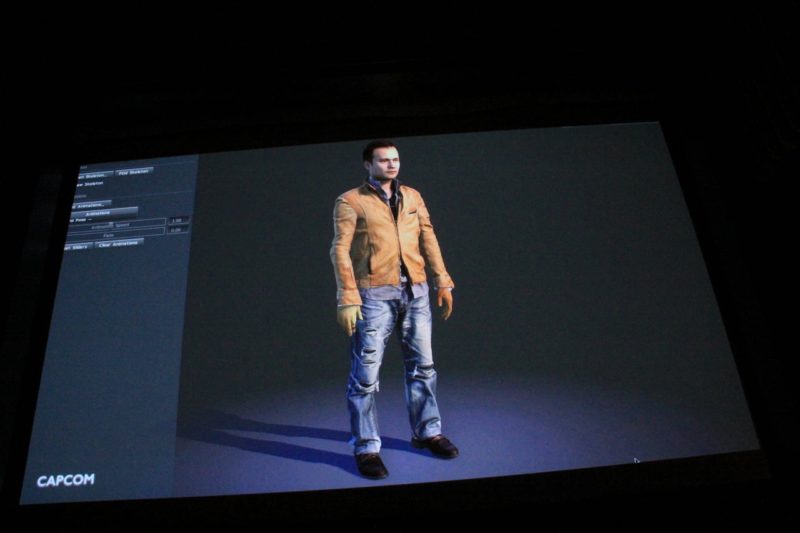 Next there’s another potential nominee for Ethan, who has a full body modeled complete with a jacket and ragged jeans. The level of detail they show off is simply incredible, I’m genuinely blown away. 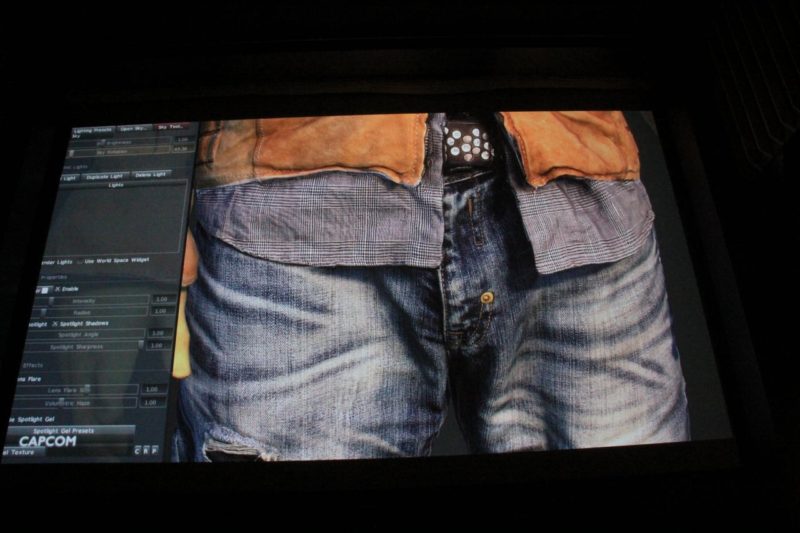 Even if the best shot of said detail is of… the guy’s crotch.

That is a very impressive crotch tho. 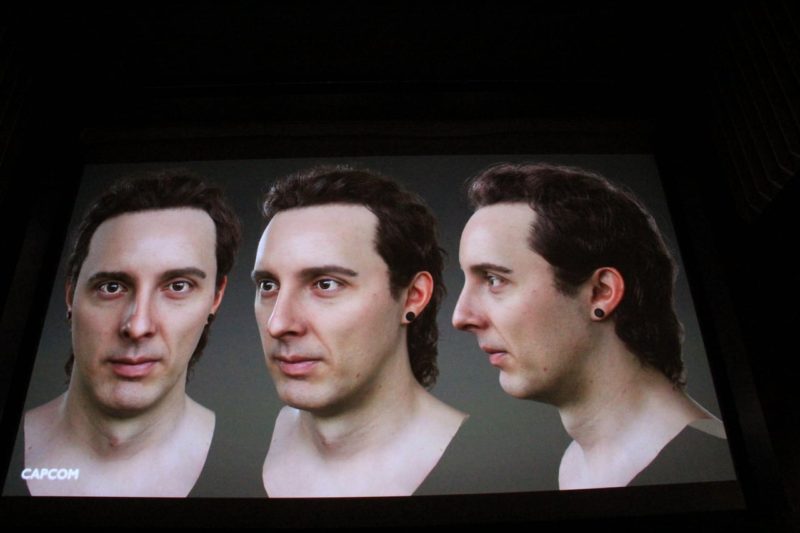 There’s a sort of rocker dude as well, who I’m hoping is maybe Clancy the camera man- it’d be nice to get a look at his mug after everything he’s been through- there’s every chance he’s still alive by the time Ethan reaches the plantation, so I guess we’ll have to wait and see. 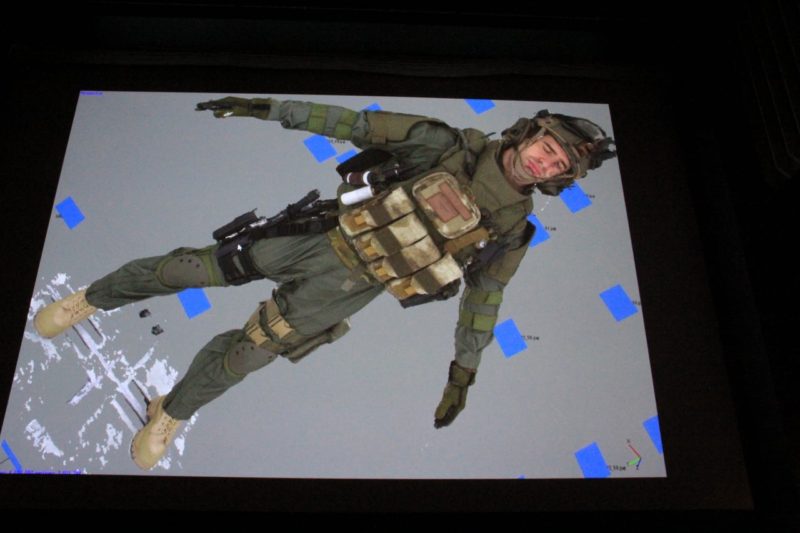 Last but not least there’s a soldier guy, which is something I wasn’t expecting to see from RE7. He might be BSAA, but who knows. Although I wouldn’t worry, the developers have been pretty clear about the direction of this game. In all likelyhood, we won’t be seeing much of this guy, whoever he is. 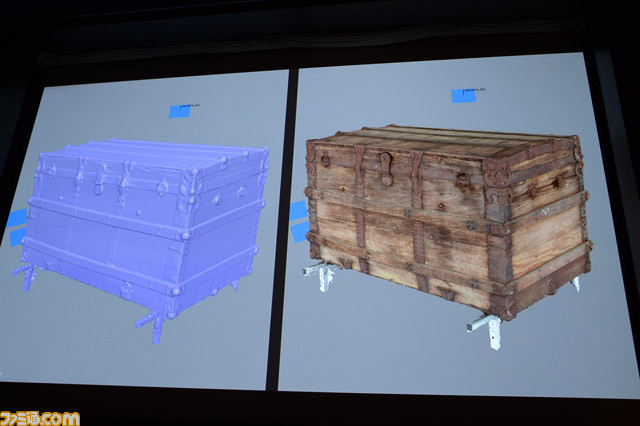 Huh. This looks familiar. Obviously, nothing is confirmed… but we do seem to have a pretty limited inventory in RE7, and aside from just dropping stuff on the ground ala Zero… that would mean that our old friends the item boxes are back. 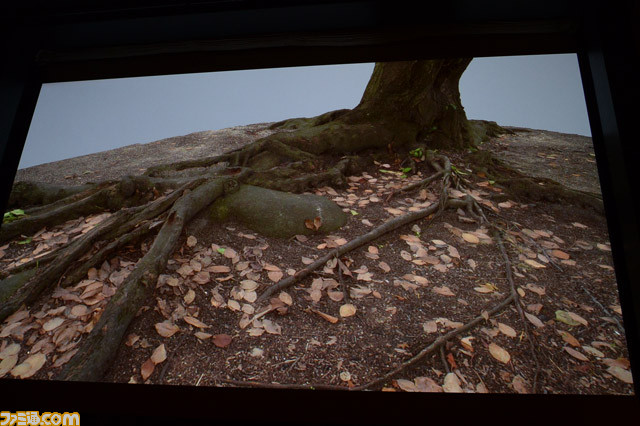 On top of all of that, they also used the Photogrammetry technique on more than just actors, but also created several areas of the environment (including that super gross dinner table of gore we saw in the Desolation trailer, yuck). Some of this stuff is really incredible, from trees and rock formations, to damn leaves, both on the ground and individually. They also seem to have made things like the creepy voodoo dolls and the moldy baby doll by hand as well, as miniatures that they then scanned. It’s amazing. It also looks like some of the gory deaths the game is getting have received the same treatment, as we see what looks like the aftermath of a shotgun to the head. It’s juicy. 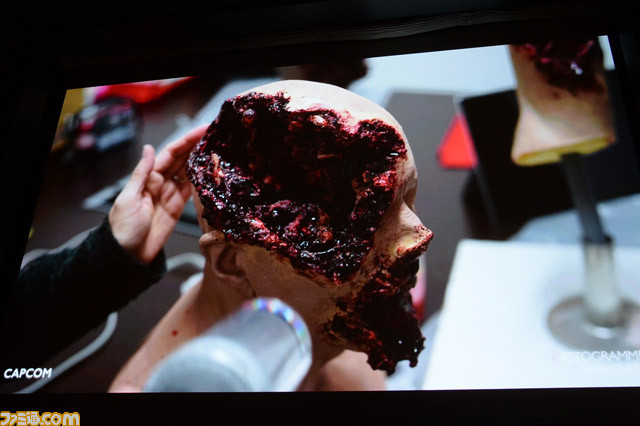 That about wraps it up for the photos (there’s a bunch more in the gallery below tho, check them out!), although there was still a tone of new information shared about how the game’s development started and has been proceeding so far, especially in the VR department, which they’re working hard to not only make a great experience, but also an optional one, making sure that if you’re locked out of the VR version of the experience (because you can’t afford it, or are playing on a platform that doesn’t have it) that the game won’t in any way suffer for it. Some changes have to be made to accommodate the VR experience, of course, but it’s more in line with tweaking elements so that they work best in one way or the other. The inventory system and hatchet weapon are examples they give, that when playing in VR both were so close to the player “vision”, that they ended up looking 2D and overlayed onto the game, rather than feeling natural, so those elements received tweaks so that they’d appear their best for when playing with VR.

Ha, so that’s all we got for now. But holy wow was that a lot. Zombies, monsters, blonde women? Resident Evil VII is looking more and more incredible with each passing reveal, and I simply cannot wait for the next piece of info. It’s been a long time since I was this excited about an RE game, not to say that I wasn’t excited for RE6, or Revelations, but there’s something special about this one that is just surpassing every expectation I would have told you I had before the game was announced. Resident Evil VII: Biohazard is returning to the world of Survival Horror January 24th 2017 across PS4, Xbox One, and PC, and we’ll most likely be getting some footage of combat in the next few weeks at TGS. We’ll keep you posted.