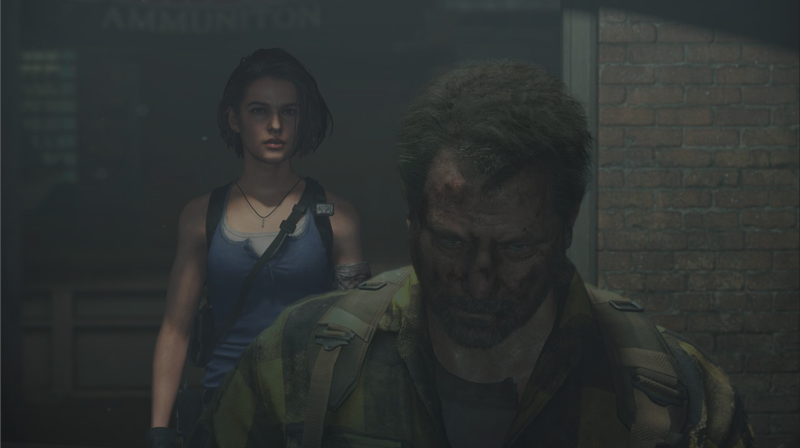 Uh, so this is a huge surprise. Earlier today we reported on a new achievement being added to  REmake 2, which has been revealed to be a special tie-in with REmake 3 after it was updated into the Steam version of the game. Out of curiosity, I went and looked through the Xbox One achievements to see if it had been added there as well. Not only had it been — but it carries a massive clue as to what this achievement could actually relate to. You see, unlike Steam or PS4 (where the achievement is represented as a small square icon), Xbox One Achievements actually use full-sized, 1920×1080 wallpaper images, which you can actually set as your dashboard background. It’s pretty cool and makes earning achievements on Xbox One a little extra special. Thanks to this, we might actually have a HUGE revelation about what this achievement could be relating to.

That’s REmake 3‘s Jill Valentine talking to REmake 2‘s Robert Kendo. This isn’t something they just threw together either, this is a unique image that doesn’t match up with any cutscene in REmake 2. They are clearly standing out back of Kendo’s Gunshop, near his little man cave shed or whatever it is, but this specific angle on him doesn’t exist in REmake 2. It’s also noticeably not raining, something that never lets up in REmake 2. On top of that, the wounds on Kendo’s face appear much more recent and fresher than the scratches on his face in REmake 2 do. Unless this is a still from REmake 3 (which would be pretty cool if Jill ran into Kendo), this seems to suggest that the update will be way more than just dropping a document on her desk.

So with that information, this will either be an actual, major DLC addition to REmake 2 (either a paid addition, like the bonus costumes, or a content update, like The Ghost Survivors), or this image is from REmake 3, which is while not as exciting, is still pretty cool. Robert Kendo has never been seen outside of RE2 content — the original 1998 game, the Darkside Chronicles section based on RE2 (although he’s already dead), and of course REmake 2. The idea of Jill running into him is pretty rad, since he custom-made almost all of the S.T.A.R.S. primary weaponry and was best friends with Barry Burton. The idea of Jill maybe running to him to snag some weapons or something is pretty cool, but it’s impossible to know right now.

Here’s hoping we find out more soon, but the idea that this DLC is a lot more major than we thought gives more credence to the idea of this being revealed at the Game Awards tonight (Keighly did only say no to REmake 3 being at the show, not REmake 2). In the meantime, all we can do is wait.