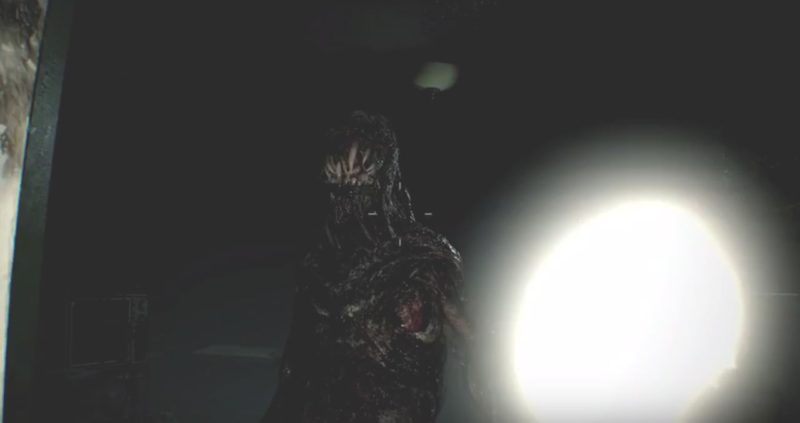 While we’re still about three months away from Resident Evil VII: Biohazard‘s release, the hype train continues to steamroll through my carefully planned evenings.

The final two World of Resident Evil videos hit tonight, after a series of short clips that have been releasing on Resident Evil‘s official YouTube account since late September. Just like the rest of RE7‘s marketing thus far, the videos have walked a careful line between revealing minor information, and revealing almost nothing at all. The previous eight videos covered RE7‘s telephone mechanic, returning item box and shotgun, saving, the knife, health and inventory management, combat against the Family Man, classic-style item examination, and some of the bizarre items we’ll be working with for puzzle solving. The videos have been counting down ten videos in total, and the last two have finally arrived, revealing

Volume 9: Shadow is the one that I think everyone was really waiting for – our first look at a non-Family threat. As the YouTube video describes it, Terrible things are lurking in the shadows… Are you brave enough to confront them?

Whatever the hell this thing is, it’s tough. I’m most reminded of a combination of Resident Evil 6‘s Bloodshot monster, and the way stage one of Imhotep’s reanimated corpse appeared in the 1990’s remake of The Mummy. This creature is completely black, and will blend into the shadows of darker areas well, making combat against it a trying task. If there was any last thing RE7‘s nay-sayers were waiting on, it was this. For the moment, I’m dubbing this beasty the Shadow Monster, and am super not looking forward to being stalked by it in what appears to be the Baker family’s cave basement, which we’ve seen previously.

Volume 10‘s name alone will intrigue anyone who’s been following RE7: Aunt Rhody. Go Tell Aunt Rhody (or Resident Evil 7‘s demented, re-worked version of the classic folk song) was one of the best things about RE7‘s E3 reveal, and has been quoted since in the Bakers trailer as well. The video’s description reads Finally, we bring you home with a familiar melody. It seems that the theme will be interwoven throughout the game itself, which I’m all for.

Feeling extremely reminiscent of The Texas Chainsaw Massacre‘s near-death Grandpa Sawyer, the old woman seen previously in several of RE7‘s trailers is discovered humming Aunt Rhody to herself in an upstairs hallway of a location we hadn’t seen yet. She’s a tiny bit more lively than she was in the Bakers trailer, but that’s to be expected. It already seems as though the Family has some sort of regenerating factor, so she was probably just going through some downtime. My only real question is – what the fuck does this mean? Will she get up and attack us in the final game? Does she simply do nothing? I need answers because she’s honestly freaking me out. My best guess is… maybe she wheels herself around the mansion, and will scream out for Jack if she spots you, making her a random element of danger that could be around any corner if we’re not careful enough (just my theory, though).

Of course, the final exciting thing about these is in the last few seconds of Volume 10, is the reveal that Tape 3 will be revealed in early December, and that this Tape is literally called “Tape 3: Resident Evil“. This is exciting for two reasons- one, it means a new trailer (both of the full-length trailers were dubbed ‘tapes’, Tape 1: Desolation, and Tape 2: The Bakers), and two, it means another demo update is probably coming (as both ‘Tape‘ trailers arrived alongside the demo’s release and update, respectively). This is probably when the full demo may be hitting PC and XBO as well, seeing as the game will only be a month away after that. This is super exciting to finally have a window when we’ll be getting more info (although obviously there’s no official date) and another update. The general consensus is that this will be the final update to the demo and that it will more than likely not only contain combat but will be significantly longer (although that’s just speculation).

Guess we’ll find out early December, as I doubt we’ll be hearing much more from RE7 until then. Fingers crossed, though. I’m down for anything.