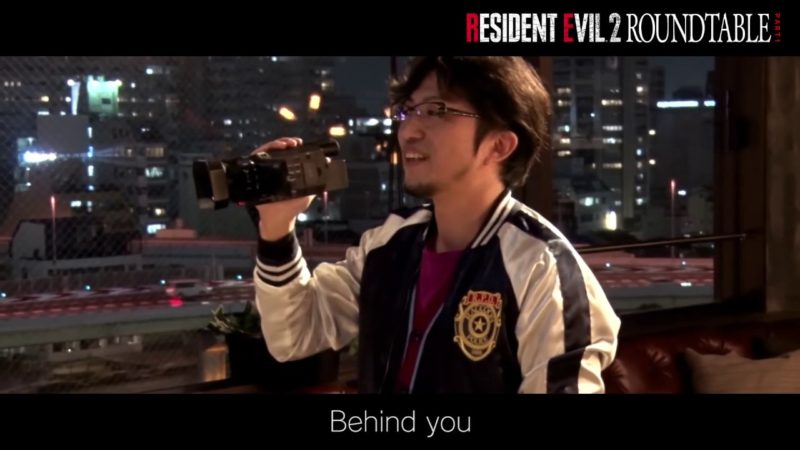 It’s very rare to see game developers get to be candid, at least like this. Most often we see interviews, where the discussion is limited to point-blank questions that sometimes the devs might not even be able to answer exactly. As great as it is to get behind the scenes information in any form, it can come off as a little sterile (and possibly even dehumanizing, to some degrees) and separate the artist too much from the art. For a change of pace, RE2 Remake‘s developers decided to do something a little different, and I have to say, I deeply appreciate it.

In a three-part series (that just wrapped up), developers from all stages of RE2 Remake‘s production got together over drinks and food to discuss the background of working on the game. The casual, joking tone feels very welcome, and I’m glad for the chance to see some of these guys like this after following them for so long. In the first part, we get to see them talk about how proud (and surprised) they are to see the game surpass a 90 on Metacritic (93 for XBO, 90 on PS4, and 89 for Steam). Basically everyone was apparently against the 1-Shot Demo idea too, which is pretty funny. There’s also a few very cool shots of a build of the game that looks much closer to the original RE2, in terms of visuals and designs. It’s also pretty cool to hear them talk about watching Let’s Plays of the game, something you might not expect a dev to do.

The second part is even more fascinating, as they dive into cut content. To be honest, a lot of this stuff I’m sorry to see didn’t make it in, from the tram car in the Arklay mountains to the freaky thing in the Orphanage. That’s sadly just the way the cookie crumbles sometimes, and no RE is stranger to cut content (in some cases, an entire games content, like RE 1.5). The one that will probably bum people out the most to see of course is the fixed camera and first-person modes. It’s actually pretty shocking to see the new version of things shown with the original camera (like, the original original camera placement in some cases). I’m sure lots of fans would have been in love with this if the game had included it, but I can understand why it was cut — especially after RE2 Remake‘s controls are so fluid and well designed. Also, there was apparently a driving section at one point? I’d love a more fleshed out artbook at some point.

The third and final part has a surprise special guest, the director of RE2 Classic, Hideki Kamiya. While Kamiya has become somewhat famous for being… kind of a dick on Twitter. In person, however, I’ve heard he’s actually a pretty sweet and humble dude, and it comes off here. Kamiya has a lovely dinner with his former co-workers, and sings high praises for RE2 Remake, and even urges fans to pick it up. It’s interesting to hear him and the others talk about working on the original RE2, sharing funny stories on how development went (including a great one about Kamiya showing up late to work, after Shinji Mikami had decided without him to include a bonus mode that would go on to become 4th Survivor). Again, it’s refreshing to see these guys as people, and not as the blank-faced developers trying to answer questions to the best of their ability.

If you have the time, I strongly recommend watching these. They’re great fun, and I’d honestly love to see more of these in the future, even for other Capcom IPs. Of course, you probably already know how I feel about RE2 Remake, so a sincere thank you to these guys from the bottom of my RE fan heart will always be in order.