Nighthawks, Text-Based Vampire RPG up on Kickstarter - Rely on Horror 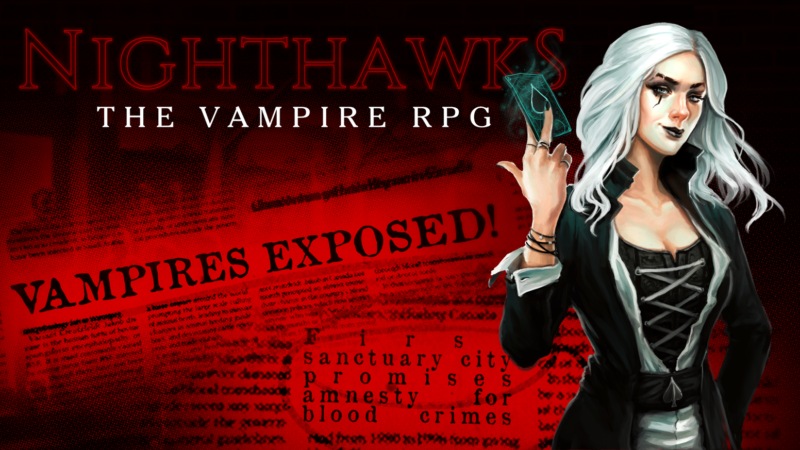 So we’ve all gotten pretty addicted to Troika Games’ Vampire: The Masquerade Bloodlines here at Rely. Sadly, there hasn’t ever been a sequel to it (and the previous game, Redemption, doesn’t really scratch that itch), but there’s enough demand out there for someone to pick up that slack. Enter Wadjet Eye Games, and their new game Nighthawks: The Vampire RPG, up for backing on Kickstarter. Written by Sunless Sea scribe Richard Cobbett, Nighthawks is a gothic urban fantasy game that sees us taking up the shadows of a freshly blooded vampire, set on making their mark in this dark world. While it’s still a ways away from its lofty goal of $125,000 (sitting at a little under $34,000 at the time of this writing) there’s still plenty of time to pledge your support (ending on October 5th). From the description:

Nighthawks is a mix of story-driven RPG and undead life-simulation, where every decision you make is another move in your chess game against the world. Invest your time into learning new skills or honing your fighting style as you uncover the city’s mysteries and venture deep into its darkest secrets. Gather fellow outcasts to your side, binding them with favors and choosing when to cash in. Manage your eternal thirst, legitimately, or balancing the risks of being caught stalking unwary victims and working the black markets.

And of course, what would a vampire be without a few secret powers? Choose from a range of dark Gifts, including Corpse-Talking, Tenebraean Form and Mesmerise. Be careful to hide all evidence of them from the authorities, while keeping them ready as your ace in the hole. Embrace your vampire side, sprinkle a little cinnamon in your blood to handle that pesky iron aftertaste, and get ready to live the nocturnal nine-to-five.

Structurally, think a freeform RPG core, with stories branching off it – some funny, some tragic, some horrific – where your decisions are always bleeding together. Get caught lying too often and your untrustworthy reputation will follow you around while raising suspicion will draw the attention of first mortal, and then darker authorities. Do you, for instance, break a window and hurriedly search a crime scene while the alarms wail, pick the lock and explore at your leisure, or use vampire powers to impersonate the security guard and walk right in? The choice is yours, and all part of learning the beat of the city, developing new skills, and building up favors and contacts to help seize the day by the throat.

I’m totally down for all of this. While I love Bloodlines, it’s pretty safe to say that combat was never it’s strongest suit. Stripping away the clunkier aspects to focus on a purely story-focused experience. Cutting to the marrow of the bone, as it were. Our fingers are crossed that this game receives it’s funding because we will be keeping a sharp eye out on this one. There’s also a number of pledge rewards for backers, including being included in the game as a victim and naming enemies. You can also check out their early development gameplay trailer to get a taste of what Nighthawks is going for on their Kickstarter page.