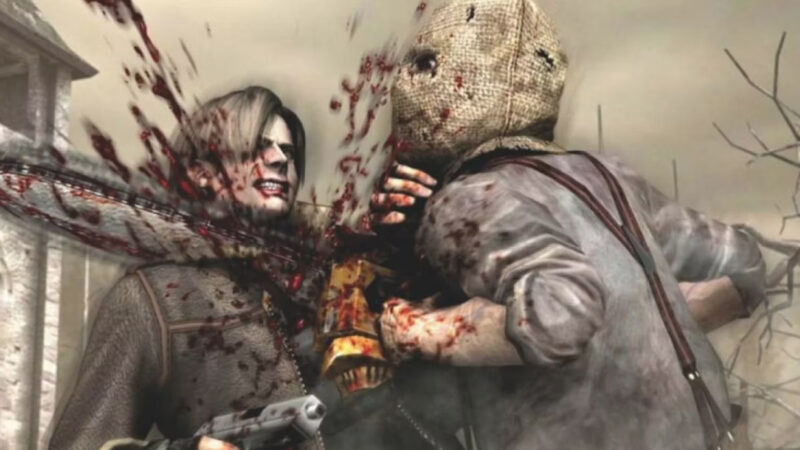 At long last, after nearly 20 years, Resident Evil has finally returned to the beautiful halcyon days of player dismemberment. The Entertainment Software Ratings Board (ESRB) has just issued their official rating for the upcoming 2023 remake of Resident Evil 4 — which is of course an M for Mature. Amongst the reasonings (such as the appearance of the words “fuck” and “shit”) is a brief description of how the player can be killed — and it’s juicy.

This is a survival-horror game in which players assume the role of a government agent (Leon Kennedy) sent to rescue a character from a religious cult. From a third-person perspective, players explore a rural environment while searching for clues and fighting zombies and mutated creatures. Players use pistols, machine guns, shotguns, and explosives to kill enemy creatures in frenetic combat. Some weapons/attacks result in decapitation and/or dismemberment of enemies, along with large splatters of blood. Enemy attacks (e.g., chainsaws, tentacles) can also result in Leon being decapitated, blown apart, or impaled. Eviscerated animals and mutilated corpses are depicted in some environments. The words “f**k” and “sh*t” appear in the game.

While it’s super fun to know that some degree of dismemberment of enemies is back on the menu (after it was missing in Resident Evil Village), the main joy here is the description that Leon can be decapitated by our all-new and horrifyingly redesigned Dr. Salvador. Blown apart and impaled are fun too of course, but decapitation is a big one as this will be the first over-the-shoulder Resident Evil game since the original Resident Evil 4 all the way back in 2005 to bring back this gory game over animation. An integral part of the original Resident Evil 4‘s identity (even featured in marketing), the chainsaw decapitation (and decapitation in general) has been missing in action ever since the series made the jump to online play, with Resident Evil 5 and 6 featuring heavily censored chainsaw deaths that simply lacked the bite Leon’s had back in the day. Player decapitation did reappear at long last in 2017’s Resident Evil 7: Biohazard, but it only happens in a few rare instances and from a first-person perspective where it lacks a bit of the cinematic punch it had before. Neither REmake 2 nor 3 featured any degree of player dismemberment, so I was starting to get worried about REmake 4… but it looks like us gore fanatics can breathe a sigh of relief.

Of course, that still leaves me curious about the other ways to die, as the original title also featured bisection, flesh-melting, and a myriad of other awful ways to see Leon go kaput. Again, the listing here mentions “blown apart” which is not something that could happen in the original (Leon would simply be flung backward if killed in an explosion), impaled (multiple enemies can do that, but the Garrador is perhaps the most notable), but interestingly this also mentions tentacles as one of the ways Leon can encounter these deaths. Perhaps a hint at how Las Plagas shall doll out death? We shall see…

Hm? What? No doctor I’m totally alright, I don’t have a problem. You can put that needle away now, it’s all play pretend! I’m not sick! Anyway, Resident Evil 4 (Remake) releases across Xbox Series S|X, PlayStation 4, PlayStation 5, and PC on March 24th 2023.