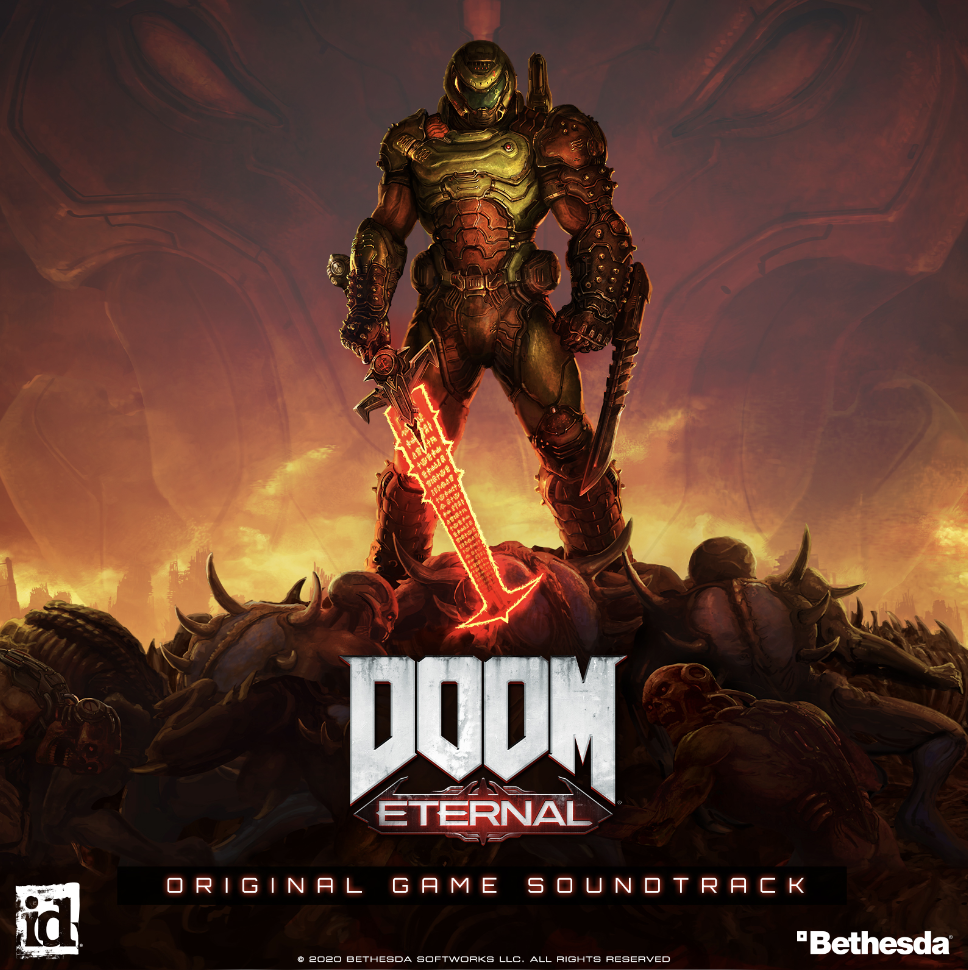 DOOM has a long history of bombastic and darkly-drenched heavy metal soundtracks. Let’s be honest, nothing feels quite as satisfying as successfully executing a glory kill or execution on a demon to the beat of a thrashing metal track. While the recent release of the DOOM Eternal OST has been met with a mostly positive response, not everyone has been impressed with the quality of its sound mixing.

For those keeping track, it was recently revealed that composer Mick Gordon was not very involved in the mixing of DOOM Eternal’s official soundtrack and admitted to only mixing “a small handful of tracks,” much to his frustration. Gordon claims he edited and mixed only 12 of the 59 tracks on the soundtrack, while the remaining tracks were edited by id’s Lead Audio Designer, Chad Mossholder. Some had speculated that this was done in an effort to speed the mixes along, and why perhaps the soundtrack wasn’t available at the time of the game’s release.

Fans first became suspicious after noticing a number of tracks on the Doom Eternal OST sounded a lot less dynamic than normal. Twitter user thatACDCguy even went so far as to compare the range and wavelengths of DOOM (2016) to its modern-day counterpart Eternal, noting that “the wavelengths in BFG 2020 (track) form a nearly perfectly straight bar vs. the original with more definition.” 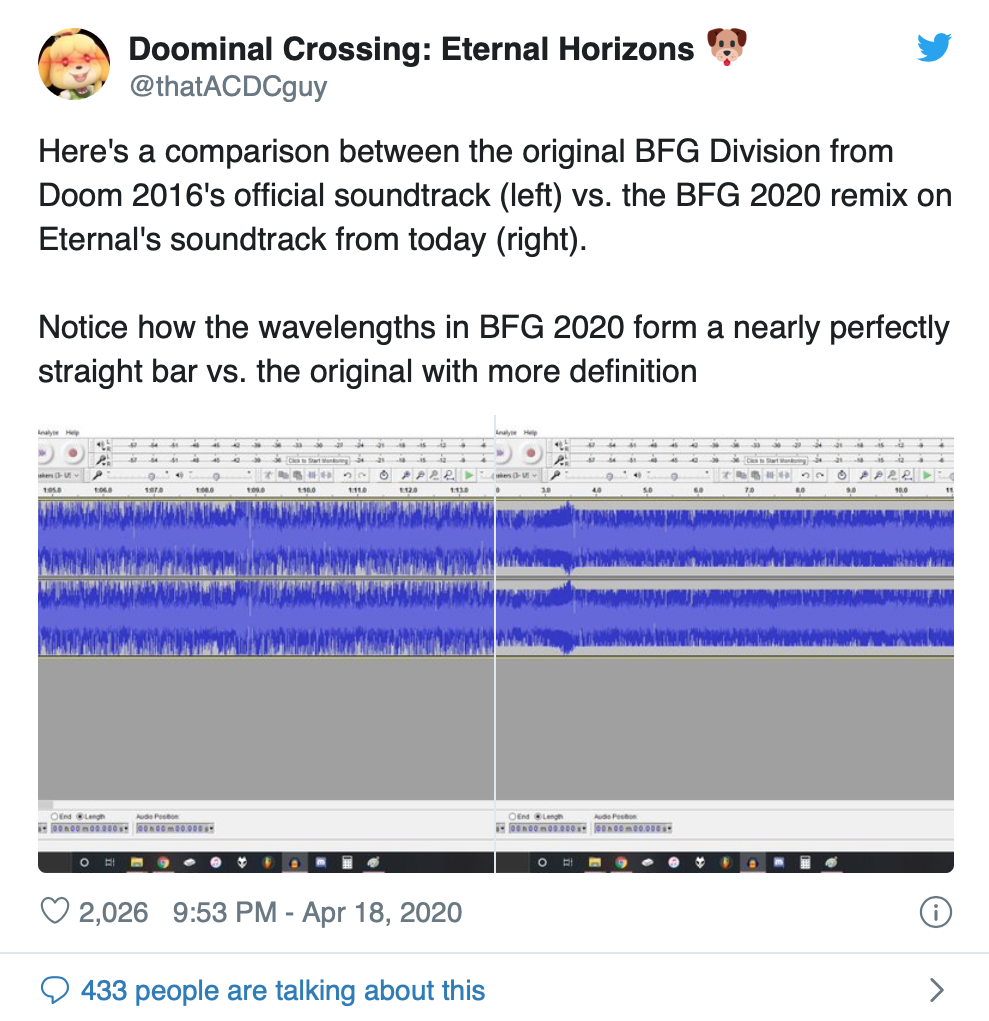 After the news broke that Gordon was less involved with the soundtrack than previously thought, a number of fans reached out to him for some clarification on the situation. After reaching out to Gordon on Instagram, one user asked if the composer would be open to working with id on future DOOM games, to which he replied “Doubt we’ll work together again.”

Earlier today, id Software responded to Gordon’s claims in an open letter posted on Reddit by the executive producer on DOOM Eternal, Marty Stratton. The letter starts by talking about some of the production struggles that emerged during development of the game’s soundtrack:

Mick has had near limitless creative autonomy over music composition and mixing in our recent DOOM games, and I think the results have been tremendous. His music is defining – and much like Bobby Prince’s music was synonymous with the original DOOM games from the 90s, Mick’s unique style and sound have become synonymous with our latest projects.

Talent aside, we have struggled to connect on some of the more production-related realities of development, while communication around those issues have eroded trust. For id, this has created an unsustainable pattern of project uncertainty and risk.

The letter goes on to lay out the terms of Gordon’s contract and what expectation were set regarding his duties and when he was responsible for delivering the game’s tracks:

On February 24, Mick reached out to communicate that he and his team were fine with the terms of the agreement but that there was a lot more work involved than anticipated, a lot of content to wade through, and that while he was making progress, it was taking longer than expected. He apologized and asked that “ideally” he be given an additional four weeks to get everything together. He offered that the extra time would allow him to provide upwards of 30 tracks and a run-time over two hours – including all music from the game, arranged in soundtrack format and as he felt it would best represent the score in the best possible way.

And how they had to push back the release of the game’s soundtrack:

Mick’s request was accommodated, allowing for an even longer extension of almost six weeks – with a new final delivery date of mid-April. In early March, we announced via Twitter that the OST component in the DOOM Eternal CE was delayed and would not be available as originally intended.

As we hit April, we grew increasingly concerned about Mick delivering the OST to us on time. I personally asked our Lead Audio Designer at id, Chad, to begin work on id versions of the tracks – a back-up plan should Mick not be able to deliver on time. To complete this, Chad would need to take all of the music as Mick had delivered for the game, edit the pieces together into tracks, and arrange those tracks into a comprehensive OST.

On the backlash from fans and Gordon:

On April 19, we released the OST to CE owners. As mentioned earlier, soon after release, some of our fans noted and posted online the waveform difference between the tracks Mick had mixed from his source files and the tracks that Chad had edited from Mick’s final game music, with Mick’s knowledge and at his suggestion.

After reaching out to Mick several times via email to understand what prompted his online posts, we were able to talk. He shared several issues that I’d also like to address.

The letter goes on to say that Gordon and Stratton did eventually talk, and Gordon was able to express his frustration with the edits that were done to the tracks. Stratton reiterates that, “We didn’t want to be involved in the content of the OST and did absolutely nothing to prevent him [Gordon] from delivering on his commitments within the timeframe he asked for, and we extended multiple times.”

The letter ends with Stratton stating that:

As for the immediate future, we are at the point of moving on and won’t be working with Mick on the DLC we currently have in production. As I’ve mentioned, his music is incredible, he is a rare talent, and I hope he wins many awards for his contribution to DOOM Eternal at the end of the year.

It’s unfortunate that things didn’t work out quite the way either party wanted them to on the Doom Eternal OST, and conflicts like this illustrate just how challenging it is to weave together so many disparate and complicated elements together to create a AAA title.

Hopefully, we can still look forward to more awesomely hellish soundscapes in the future as further installments in the DOOM saga are released.

DOOM Eternal is out now on PC, PS4 and Xbox One. There is currently no release date set for the forthcoming DLC.