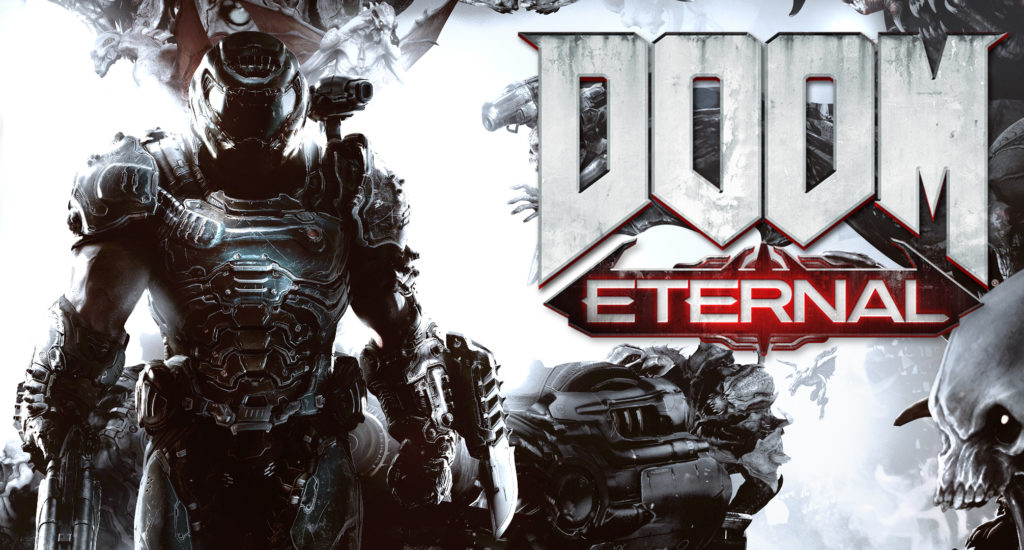 The premise of the DOOM series is simple. Demons start cropping up, and it’s your job to shoot them. The series’ soft reboot DOOM (2016) set the bar pretty high and managed to remain faithful to the franchise’s original trilogy while adding its spin on the formula. This raises the question: how does the newly released DOOM Eternal compare? The wheel doesn’t get reinvented this time around. Instead, the title opts to expand and refine upon its predecessor’s ideas, and I am happy to say that it does so rather successfully.

Easily the biggest draw of the franchise is the gameplay, which is centered primarily on constant movement and brutal violence. The series’ array of classic and diverse demons return, each with prominent strengths and weaknesses. For each enemy in the game, there’s a tool in your arsenal to dispatch them. Within the arena-shaped environments, players will find themselves deciphering an “FPS puzzle” of sorts, prioritizing targets, managing their resources, and moving as quickly as possible — one screaming problem at a time while occasionally taking chainsaw breaks to regenerate ammo. Speaking of the player’s arsenal, just about every new piece of equipment improves the gameplay loop of DOOM (2016) in some way. The thrusters allow for infinitely greater movement and control while making the game’s pacing even faster. A shoulder-mounted flamethrower causes enemies to drop armor, making it a resource rather than a novelty that’s usually lost very quickly.

Some fans may be turned off by the heightened focus on exploiting the strengths and weaknesses of demons, especially since previous DOOM releases allowed players to succeed with any weapon of choice for most encounters. I disagree with this sentiment, as I feel the management of resources and the necessity of using one’s entire arsenal mandates greater decision making. Since there’s a level of strategy involved, players are adequately rewarded when they successfully do “the DOOM dance.” I appreciate this increased challenge, especially since players must play smarter, as opposed to the developers merely making enemies bigger bullet sponges.

Outside of the arenas where most combat takes place, there are regular platforming sequences. Movement through these sections is intuitive and feels good to execute successfully. Often these areas are littered with additional upgrades and fanservicey collectibles. Finding these items require enough thinking and exploration to provide a challenge, yet are not obscure enough so that a YouTube walkthrough is mandated. DOOM Eternal is among the handful of games that makes collectible hunting fun, which is a feat in and of itself.

In terms of gameplay, the only real flaw that I can see is the equipment portion of the HUD being a little messy and hard to read in the heat of the moment, but that’s really about it. 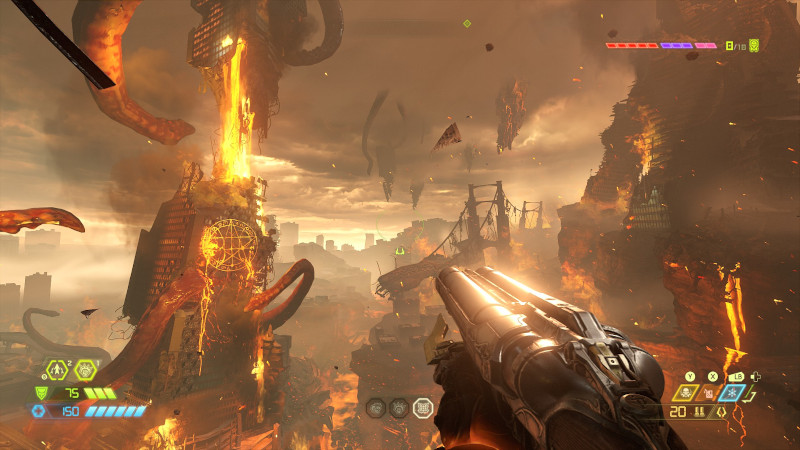 Doom Eternal is, in many ways, a continuation of its predecessor. It has the same tone and atmosphere and even improves on it in some regards. A more substantial issue that I took with DOOM (2016) was the lack of visual variety in its environments. The red and brown aesthetic compliments the Mars setting, but it certainly wouldn’t have hurt to splash a few more colors here and there. Doom Eternal successfully addresses this criticism, as the Doom Slayer travels across a broader array of locations, making individual sections infinitely more exciting and memorable, especially in the latter half of the campaign.

Metalheads will likely adore Doom Eternal’s soundtrack, as it literally sounds like a horde of machinery dying, which perfectly compliments the game’s fast-paced brutality. The only nitpick I have is in regards to the soundtrack itself. Not in the music’s presence, but solely in the number of tracks. Even if more music from DOOM (2016) was included, something to provide a higher level of variety would have been welcome.

DOOM has always been about a green man shooting things, and that’s it. The classic and reboot games alike tend to revel in its simplicity, which is true for the games’ plots. This is mostly still true in DOOM Eternal, but the narrative received an unusual amount of attention this time around. The plot centers around the Doom Slayer hunting down a series of hell priests leading the invasion on Earth, before eventually taking the fight back to their home turf. It’s essentially Halo 2. DOOM Eternal makes strides to expand the universe, as though there is an entire world that exists beyond the Doom Slayer’s rampage. I appreciate that about the plot, particularly, how it manages to be of greater importance without getting in the way of the gameplay’s signature rapid pacing.

However, there is an aspect of the storytelling that turns me off: the attempt to flesh out the Doom Slayer as a character. Most of the cutscenes consist of characters being in awe of how big and scary the man is, and these moments work because the Doom Slayer is a mary-sue wish-fulfillment character. No one likes him because of his personality, or because he’s relatable, or how he overcomes such overwhelming adversity. People like the Doom Slayer because they like projecting themselves onto him — imagining that they are the cool badass that told Lucifer to go fuck themself. I’m generally not a fan of characters like this, but the half-assed attempts to give context to the character just subverts the coolness and simplicity. The backstory sequence doesn’t overstay its welcome, at least, but the decision still calls unnecessary negative attention to how shallow the character is. Going forward, I would like to see less of a focus on the Doom Slayer and more of a focus on the world around him. 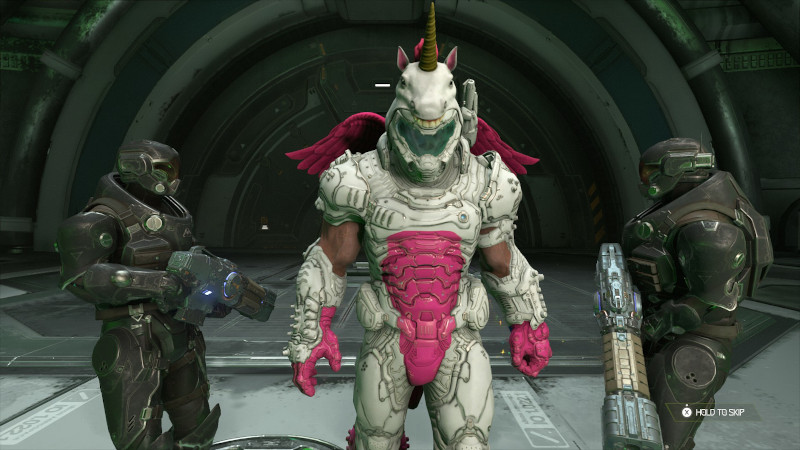 Moving on…this game has multiplayer. Yeah, I don’t know why either. On second thought, I do. Bethesda and id Software have made it very clear that they want DOOM Eternal to be a live-service game, regardless of whether it makes sense. The multiplayer, which now known as “Battlemode,” is an asymmetrical game type in which two demon players attempt to take down another player controlling the Doom Slayer. The pitched intention is that the Slayer will need a significant level of skill to win, whereas the demons will need to perform impeccable teamwork.

Unlike Doom (2016)’s “attempt” at a competitive multiplayer, Battlemode is fun enough to bother with, at least when network issues aren’t impeding on your playtime. While controlling the Slayer is more or less the standard fair, playing as one of Battlemode’s five demons is surprisingly enjoyable. I was thoroughly uninterested in playing as any of these demons out of an expectation that they’d control poorly — a pitfall that many titles like Killing Floor and Left 4 Dead have fallen into. I’m glad to say that isn’t the case in DOOM Eternal as movement and actions as a demon are almost as fluid as the Slayer in the main game. Furthermore, demon players feature the ability to summon AI demons to help combat the Slayer, which is a tactic I thoroughly embraced despite the fruits of my labor rarely being rewarded.

It is worth mentioning, however, that many players seem to feel that Battlemode is incredibly unbalanced. As to what those balance issues are, the answer will vary vastly depending on who you ask. Some will say demon players are incredibly overpowered, whereas others will claim that defeating the Slayer is damn near impossible. I’m not sure whether or not either of these sentiments is correct, especially since the meta can evolve so drastically over time. With that said, I can say that I haven’t had a match that wasn’t horribly lopsided in the results of the victorious team. You’ll have to make of that what you will.

Unfortunately for the players who dislike Battlemode, there are no other multiplayer offerings, as the entirety of DOOM (2016)’s multiplayer modes were cut. An understandable decision, but why go through the effort of making Battlemode if that was going to be it? Despite being mildly fun, Battlemode feels like it exists out of a mere obligation (“There has to be some multiplayer offering so we can sell more DLC later on”). As a result, I don’t see players checking into this regularly, like the developers are hoping. 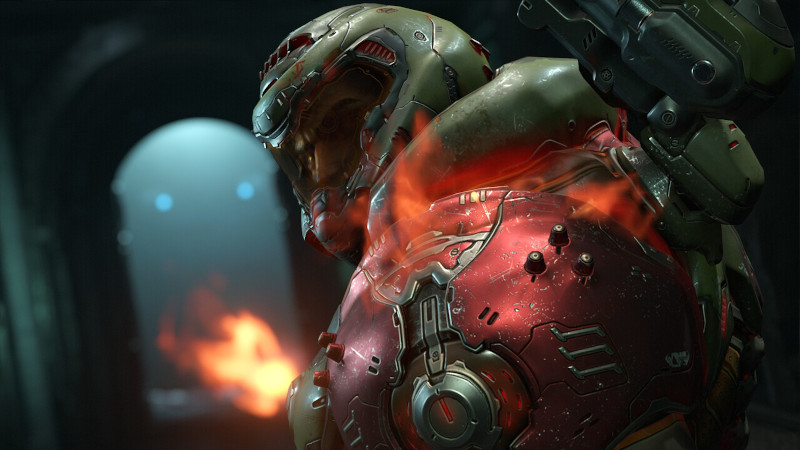 Fans of DOOM (2016) will likely feel similarly about DOOM Eternal, as the title is practically more of the same. I don’t intend that as a criticism, mind you, as DOOM (2016) was a fantastic title. While that means there is still an underwhelming multiplayer, it also means that the singleplayer is impeccable, likely among the best games of the year. Despite the hiccups, DOOM Eternal expands upon and refines the great ideas introduced with its predecessor enough to justify its existence, and people should absolutely play it for the singleplayer experience alone. It’s one hell of a time.