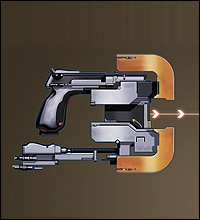 The 211-V Plasma Cutter is the first weapon that Isaac comes across on the blood-spattered decks of the Ishimura. A tool designed to use ionized gas and plasma energy to chip pieces off boulders so they’ll fit in smelting tubes, the Plasma Cutter is frequently found within the tool boxes of miners across the galaxy. Its primary function allows a short, accurate long range energy blast, while its secondary fire rotates the blade ninety degrees, allowing you to fire vertical or horizontal shots.

The first weapon you find in the game, is also one of the most versatile.

Tips on using the Plasma Cutter in combat :

. The Plasma Cutter is your staple weapon for the early parts of the game, and should be considered your trusty standby. It’s recommended to keep at least one spare full cartridge of ammunition (which consists of 25 rounds) or more for those situations where you may run out of ammo for your other weapons. Keep your Cutter loaded and ready at all times!

. Finishing the game using only the Cutter will give a Trophy for the PS3, and an Achievement for the 360. It also gives an extra 10 Nodes on completion.

. Shots are fairly plentiful, but the Cutter is more of a precision weapon than others. You can use it to quickly and efficiently dismember Necromorphs, especially if you hit them with Stasis. Always remember that alternate fire rotates the blade array, allowing you to fire vertical or horizontal shots depending on the positioning of the enemy’s limbs.It is recommended that you adjust the Cutter specifically to the limbs you are about to shoot. For example, vertical against a Slasher’s arms or horizontal against it’s legs.

. Alas , the Plasma Cutter is useless against Swarmers due to a lack of splash damage.

Cost : Free , being the first weapon Isaac grabs near an ominous “SHOOT THEIR LIMBS!” message on the wall written in blood. 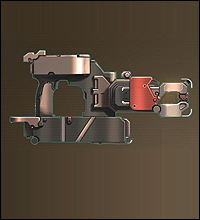 At first glance, the IM-822 Handheld Ore Cutter Line Gun might appear to be a larger, much more powerful version of the 211-V Plasma Cutter , and that’s not terribly far off. Line guns are used to cut gigantic boulders down to size so that Plasma Cutters can then be used to finish the smelting process. However, the functionality of the extractor is completely different. The primary function projects a wide horizontal energy beam that is extremely powerful, shearing through its targets. The secondary function fires a timed mine that explodes, causing significant damage to enemies nearby.

Tips on using the Line Gun in combat :

.  The width of the blast is much wider than the Plasma Cutter and can be upgraded to become even wider. Also, bear in mind that the beam is capable of passing through multiple targets , making the Line Gun an extremely useful crowd controller. Unfortunately, unlike the Plasma Cutter , it can only fire horizontally and not vertically.

. Line Cutter ammunition is also very sparse, second only to the Contact Beam. It is recommended to keep more than one set of line racks, and to save the Line Cutter for extended fights (such as brute fights , or even guardians).

. The best moment to use the Line Gun’s primary fire is when all attacking Necromorphs are charging towards you only from a single direction, so the beam can slice through multiple Necromorphs , putting all of them or most of them down with relative ease.The Line Cutter’s mine can almost instantaneously kill weaker Necromorphs and only consumes one Line Rack, so time it right to take out multiple Necromorphs easily while saving ammo.

. Stasis can be useful in conjunction with mines: use it to slow the target, then drop a mine right at the Necromorph’s feet.

. Line Cutter blasts travel at a speed visible to the naked eye compared to the instantaneous travel speed of other weaponry, and can be dodged by fast Necromorphs like the Twitcher.

. The Line Cutter performs best in hallways or crowded areas that prevent even fast necromorphs from dodging the blasts.

Designed for maximum stopping power, the SWS Motorized Pulse Rifle uses electric coils to accelerate rounds to extremely fast speeds and is a favorite of military troops and security forces on ships around the universe. Primary fire is a rapid fire burst of ammunition, which can be used for long range targets. Secondary fire releases a packet of ammo that shoots out in 360 degrees, allowing you to hit multiple enemies at once.

It is the only weapon in the game that is intended to kill, unlike all the others which are engineering tools.

Tips on using the Pulse Rifle in combat :

. The Pulse Rifle works well in most situations, but is particularly recommended for taking out fast enemies such as the Twitcher, since it effectively stops them from moving on contact (just make sure you keep an eye on the ammo counter)

. It is imperative to fire the Pulse Rifle in bursts. Accuracy will decrease significantly and ammo consumption will increase if the Pulse Rifle is fired in full automatic.Also , note that the rifle is normaly incapable of firing a single round in a shot; it can fire 2 shots at the very least, unless you lower the weapon while firing.

. The rifle’s primary attack is capable of dismembering both horizontally and vertically at once thanks to its Y-shaped crosshair.

. The Rifle’s secondary fire literally devours ammunition, and since each individual shot does little damage this secondary fire makes for an initially poor area-effect attack and should be replaced by a different area-spread attack, such as the Contact Beam’s secondary attack.

. When adequately upgraded the secondary fire will shred enemies apart easily, but low-lying enemies on the floor such as Leapers, Lurkers and crawling Slashers will be less affected by the lead-storm.

. The Rifle’s Secondary Attack also seems to ricochet off nearby hard objects, making it slightly more effective in very tight quarters or backed into a corner, directing the attack ahead of Isaac.

Sometimes the best ore is found within comets, but its trapped within layers of ice. The industrial flamethrower uses liquid hydrazine to produce an intense flame between 500 and 4000 degrees celsius, which is projected on a surface, immolating the target and breaking it apart. Its primary fire projects a narrow cone of flame that provides short range bursts of flame. Its secondary mode projects a napalm-like orb that explodes on contact, setting nearby targets ablaze.

Tips on using the Flamethrower in combat :

.  The Flamethrower has the fastest rate of ammo consumption while the primary fire button is held down, making it even quicker than the Pulse Rifle. Conserve fuel by firing the primary fire in short, controlled bursts when you’re sure only some of the fire will miss your target. Taking flames can cause enemies to recoil briefly, and the flames will briefly stick to enemies as well, inflicting additional damage.

. The secondary fire of the Flamethrower consumes 10 fuel rounds per shot, and the blaze lasts for a few seconds before subsiding. This attack is best used to set up a small defensive firewall against incoming Necromorphs, where the fire will damage them, softening them up for other attacks. Likewise, don’t step in any blaze you make!

. The Flamethrower does not work in vacuum, due to the lack of oxygen needed to sustain the flame. (In reality hydrazine, a hypergolic fuel, is typically used with a liquid oxidiser stored with it and can even burn without any oxidiser as a monopropellant, so a hydrazine flamethrower could theoretically be made to work in a vacuum , but thats just a technicallity.)

. An intense buildup of flames can cause your game to lag seriously so it’s a good idea to skip this weapon if your PC can’t keep up with the fires it makes. Too bad for the pyromaniacs ,eh?

Firing Speed / Charge : Fire Duration = 5 with a maximum of 7

The Force Gun is a short-range kinetic booster device that fires a burst of energy that acts like a huge force of gravity into any forces nearby with a stunt blow. It’s secondary fire mode shoots a large spherical projectile that bowls though enemies and then explodes with great force.

A remote industrial saw that can shred through nearly anything within contact. Its rounds consist of small sharp blades that spin when fired. A force to not be reckoned with!

Much like the Force Gun, the Contact Beam is an energy projector that deals heavy damage but the drawback of this weapon’s rate of fire, causing the user to have to charge the weapon before firing the cosmic energy.