Climbing Through the Branches of Man of Medan 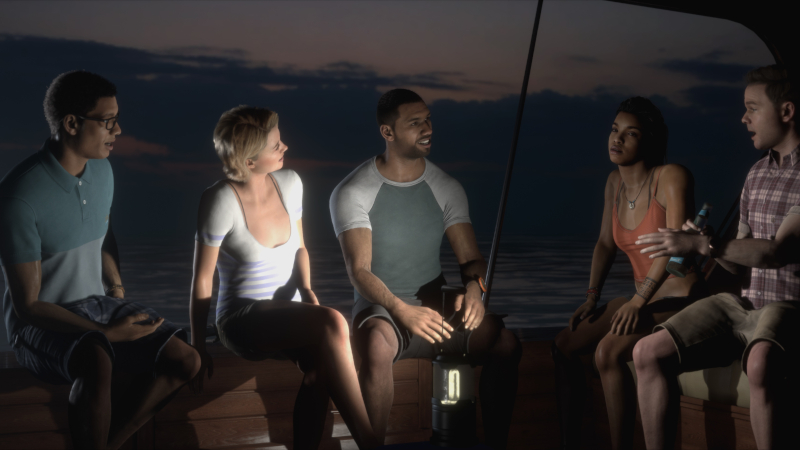 Another week, another Man of Medan developer update. Do these folks sleep? They must not, because trailers, developer diaries, and other tasty tidbits are flying out of that studio faster than a busy day at LAX. The most recent developer diary expands on the multiplayer announcement made last month, giving players a look at how the system works behind the scenes.

If you’ve missed the dozen or so posts we’ve made thus far about Man of Medan, here is your ultra-fast rundown. The Dark Pictures Anthology: Man of Medan is the first entry in a series of branching-story cinematic horror games by Supermassive Games, the team that brought us Until Dawn. Each story is independent of the others, though I get the feeling we will be seeing The Curator fairly often throughout the series. Man of Medan follows a group of young adults who set out on a diving adventure to explore a shipwreck, but that goes horribly wrong when a ghost ship appears floating atop the water and all everyone on the smaller vessel decides to go exploring. Phenomenal ideas beget phenomenal experiences, and the group winds up in exactly the kind of situation any good horror fan would expect. Every team of adventurers obviously needs a Friday the 13th aficionado to avoid this fate.

Man of Medan brings a new player experience to the choose-your-own-adventure horror genre by adding multiplayer modes. Grab a handful of controllers and invite several friends for Movie Night mode, where every player controllers a different character, or hop online and join one friend for the shared narrative experience. Two players control two separate characters in the shared narrative, but follow the same storyline as the single-player game and share scenes, influencing one another’s choices and options while maintaining independence.

The latest developer diary delves into the process behind creating a game flow that works when more than one player joins the fray. Branching storylines already require a ton of data to exist within a game. The cinematic experience that Supermassive is known for only extends that data requirement further, making it a minor miracle that they managed to fit not one, but two complete multiplayer modes onto the same single disc. The video is seven minutes long, so I’ll leave the in-depth explanations to the actual team, but suffice to say, this game is going to be a beast.