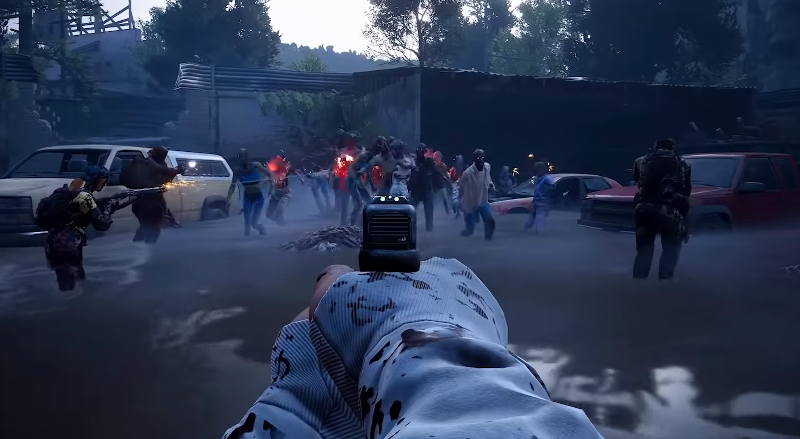 At the last The Game Awards, Turtle Rock Studios first showcased Back 4 Blood, the spiritual successor to the Left 4 Dead series. Since then, select players have been able to get a taste for the gameplay through an alpha test generating a lot of early feedback. Now, in a recent development blog, the team at Turtle Rock decided to shed some light on the creative direction for the game. They express a desire to not just recreate the same experience as Left 4 Dead, as they want Back 4 Blood to have an identity of its own, and they wish to meaningfully advance the genre of cooperative zombie games.

One point Turtle Rock highlights are the new survivors. This cast of characters is more experienced in combating the undead (and potentially immune to the virus) and take measures to proactively fight back against the Ridden (zombies) with the intent of clearing them from a location. The survivors of Left 4 Dead were generally fleeing the danger and seeking a safe location. Overall, this shift in premise suggests to me that the Back 4 Blood is going to lean slightly more into the properties action elements as opposed to horror.

With that said, many core elements of Left 4 Dead will return in Back 4 Blood, such as common and special infected, the latter of which can be controlled in Versus mode. I’ve noticed that many of the special infected are larger in scale in comparison to their predecessors, with the Ogre being the most notable example which towers over Left 4 Dead‘s Tank. Another carryover from the team’s previous work is the “game director”.

For the unfamiliar, the idea of the game director is that every match, the game will dynamically react to players and their progress and may or may not choose to alter the spawns of resources and zombies in order to make each playthrough unique. Left 4 Dead was highly replayable, due in part to this system, and that replayability is an important goal for Turtle Rock. However, the team is seeking to expand on the game director with Corruption Cards. These cards will take effect at the beginning of each match and may give buffs to the infected, or add additional obstacles for players to overcome. Furthermore, this idea of high replayability ties into their grander ambitions for Back 4 Blood, as Turtle Rock states that they want the title to evolve over time. In other words, Back 4 Blood will be a live service title, and this is unfortunately where I start seeing red flags.

According to Back 4 Blood‘s official website, we can expect various cosmetic items (some of which are locked behind the Ultimate Edition) as well as survivors and special infected that are locked behind a season pass. As we’ve learned from the gaming industry over the last few years, live service and its accompanying monetization is toxic for game design and development. I would really like to see Turtle Rock deliver upon the promises to ‘further the cooperative zombie genre’, as I love Left 4 Dead and zombie games, but I fail to see how the company is going to succeed with this business model, especially considering that Left 4 Dead still has a player base, features no monetization, has extensive mod support, and is still really fun in 2021.

Hopefully, Turtle Rock can quell my concerns when Back 4 Blood launches on June 22, 2021, for Xbox One, Series X/S, PlayStation 4, PlayStation 5, Steam, and the Epic Games Store. If you’d like to watch the development blog, you can do so below.