Bright Falls is a nice little town located up in the mountains of the Pacific Northwest.  It’s your ideal little place to get away from the hustle and bustle of city life.  And like every small town, Bright Falls is full of unique characters.  Some of them we wish we could know more about, others, we wish they would just shut up (Barry…hmm).  Take a look below at some of the full-time and temporary locals of Bright Falls.

The protagonist of the story, Alan is a best-selling novelist.  Unfortunately, his career has recently taken a turn for the worse–when writing is your game, writer’s block can be a fatal hit.  For the last two years, Alan has been unable to write and has been having difficulty sleeping, making him edgy and violent.  During the events of the game, it’s possible that his insomnia has driven him almost to the point of madness. 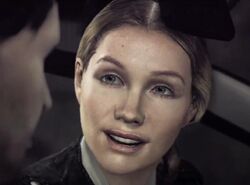 Alice is an accomplished photographer and described by many as a natural beauty.  Alice has been Alan’s muse since the two of them first met.  Being a devoted wife, she is deeply concerned with Alan’s self-destructive behaviour and wants to ensure that he gets back on the right path.  She set up the vacation to Bright Falls to help Alan get over his writer’s block and get him back to work.  But Alan isn’t alone with his demons–Alice has a crippling phobia of the dark.  Something that doesn’t quite help in a place where most power is obtained through rickity old generators. 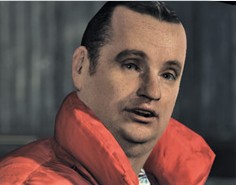 Although you probably wouldn’t guess it, Barry has been a friend of Alan’s since childhood.  Barry has watched Alan’s decline both as his friend and his agent.  He’s on top of everything back in New York, keeping things rolling, setting up tours for Alan even though he hasn’t written a thing in two years.  When Alan stops returning his calls, he rushes out to Bright Falls to the aid of his friend.  When he gets there, he finds himself completely out of his element, but is ready to fight to the hilt for the safety of his good friend.

A smart and authoritative young woman, Sarah Breaker and her deputies definitely have their hands full with the upcoming annual Deer Fest.  Breaker doesn’t let Alan’s celebrity get the better of her.  She’s determined to get to the bottom of the mystery of Alice’s disappearance though, even if she does have Agent Nightingale breathing down her back the entire time.  As confident piloting a helicopter as jailing a drunk logger, she doesn’t let her badge weigh her down.

It’s unclear why Agent Nightingale has come to Bright Falls, only that he’s after Alan Wake.  What is clear however is that he doesn’t want to be there.  Whatever is drawing him there must be very important–he’s commonly seen in an intoxicated state, bosses around the local law enforcement and expresses a clear dislike of Wake and the rest of the residents in Bright Falls.  It would appear however that Nightingale is going through a breakdown of his own.  Nightingale’s motives and the results of his investigation in Bright Falls are more clearly explained in the book that accompanies the Collector’s Edition of Alan Wake, The Alan Wake Files.

A brilliant psychiatrist and author of The Creator’s Dilemma, Hartman specializes in the long-term treatment of troubled artists at his Cauldron Lake Lodge.  Considered distant and arrogant by the townspeople, Hartman’s methods are unorthadox, and his results uncertain.  Some patients are restored to their former artistic lives after a few months, while others remain under his care for years without any improvement.  When Alan Wake ends up in his care, it’s unclear whether Hartman can help him–or if he even wants to.

Rose is a waitress at the Oh Deer Diner (a.k.a: The Bright Falls Diner in some instances).  She’s an avid reader, and as such, is caught light a deer in the headlights when he steps into the Oh Deer.  Alan clearly expresses his distaste for over-eager fans, but that doesn’t deter her.  She considers her chance meeting with Alan Wake to be the best point of her life so far.  Kind of depressing. 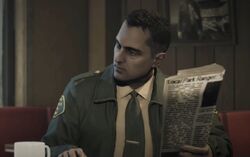 Rusty is a park ranger in Elderwood National Park.  Generally a nice guy, perhaps a bit of a pushover.  His career choice and actions express that he loves animals and can be seen helping Max the dog in the game.  Alan Wake first comes across him in the diner, around the same time he first meets the Anderson Brothers.  Rusty is a pretty big fan of Rose’s coffee, and in finding the manuscript pages you can see that there’s a fair bit more going on with Rusty and Rose.  But perhaps it’s a love just not meant to be?  Rose is infatuated with Alan Wake…some guys just have all the luck.

Cynthia Weaver can first be seen at the Oh Deer Diner when Alan and Alice first roll into town.  She’s carrying a lamp with her, which is strange, because it’s daylight.  She looks down the hall into the darkness and warns Alan that ‘you can get hurt in the dark.’  This is a statement that keeps coming up routinely throughout the game–it can be seen scrawled across rocks in yellow, photosensitive paint.  Maybe she’s onto something?

The Anderson Brothers (Tor and Odin)

Every town has their resident weirdos, and in Bright Falls, that honour belongs to Tor and Odin Anderson.  The two of them were part of a rock band back in the 60s known as The Old Gods of Asgard.  Their music and lifestyle reflected that of Norse mythology so much so that they changed their first names to match the persona of the band.  Currently they’re both patients of Hartman’s at Cauldron Lake Lodge.  They’re not dangerous, mind you…maybe.  Or maybe they seem to know more than anyone gives them credit for?  Being crazy does tend to help you ‘understand’ crazy.

What small town would be complete without its own hometown radio station?  While Alan doesn’t tend to listen to much music, it’s clear that the folks of Bright Falls like their main man Pat Maine’s nighttime radio broadcast.  Turn on any radio that you find in Bright Falls and you’ll hear his welcoming voice.  If something’s going on around town, you bet that Pat Maine will be picking up the info and broadcasting it to the people.  A good friend of Sheriff Breaker and on the side of the law, it’s clear from the start that he doesn’t much care for Agent Nightingale.  On the plus side, he does take a liking to Alan Wake.

The Lady in Black

Shorty after Alan and Alice arrive in Bright Falls, Alan is greeted by a strange woman.  Who is she?  Where did she come from?  How did she get Stucky’s cabin rental keys?  And why does she want to meet Alice so badly?