Preview: Wolfenstein: The New Colossus Empowers the Terror-Billy in us All 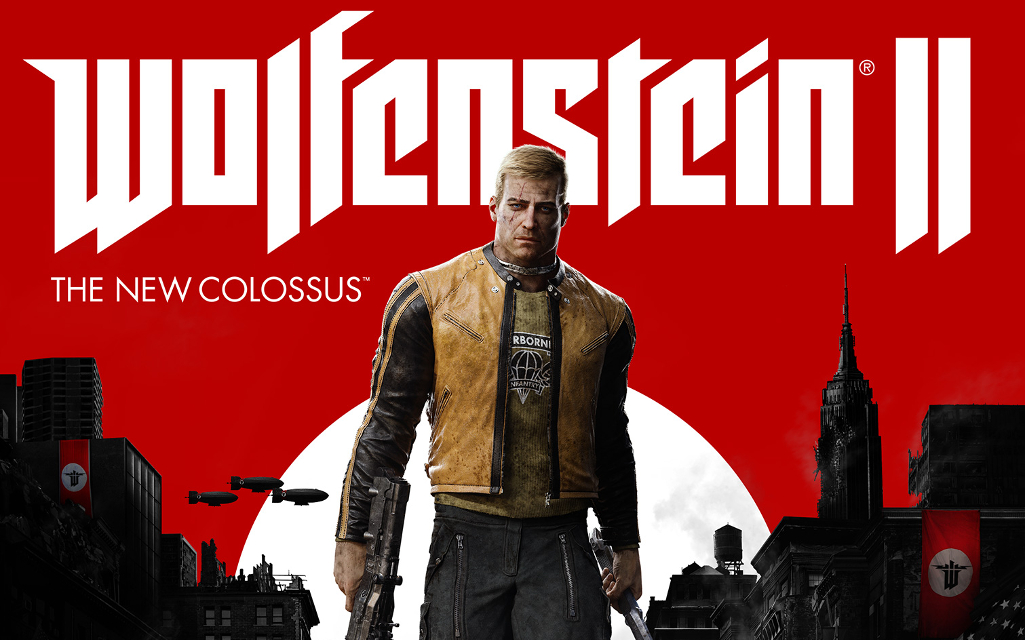 If you happen to be in the Nazi scalping business in 2017, business is very good.

Bethesda’s 2014 reboot of the Wolfenstein franchise from developer Machine Games was a surprise hit, bringing a level of joy and clever yet old-school mechanics to the table that would serve as the launching test grounds for their reboot of DOOM as well. Circling back to the Nazi Murder Sim franchise of topic, I had the opportunity to see what Bethesda will bring to the table now that the bar has been raised considerably for the Wolfenstein franchise.

The reveal trailer for Wolfenstein: The New Colossus showed us a slice of late 50s Americana wherein the Nazis and the Klan effortlessly enforced their status in society. Our gaze is put onto an insidious street parade within a small town, with striking propaganda abound. They, to us as observers, were the new normal in Wolfenstein’s alt-history society. Series protagonist William “B.J.” Blazkowicz, aka Terror-Billy, thankfully there to ruin everyone’s good time. B.J. blazk in action.

I know. I’m an idiot. Whatever.

In a hands-on with Wolfenstein II: The New Colossus, I got a chance to try out the introductory level and a larger chunk near the middle of the game. We’ll get to the story and my impressions of everything else in a bit, but first, we have to get the issues of the game’s bugs out of the way. I’m no stranger to playing unfinished builds of AAA titles, but the version Wolfie 2: Electric Boogaloo that I fired up was frustrating and disappointingly broken. And this was also acknowledged by the team, who had to push back our preview date and warn us before starting our demos not to aggravate the Nazis in a certain sequence because they had been too buggy and not working as intended.

I know this isn’t a finished build by any means, but hearing the line “don’t aggravate the Nazis” in a Wolfenstein game hands-on is just heartbreakingly tragic.

To the specifics of the issues I encountered: my game restarted whole story segments after I pulled switches that I shouldn’t have pulled, and elsewhere my sweet boy B.J. fell through the floor to a sudden instadeath. If you’re having trouble keeping the floor in existence, maybe we’re not ready for press yet, even for the most forgiving members. I also couldn’t navigate through an underground mine/tunnel system without bugging in and out of the wall. But there were also serious issues that I can only define as level design related, I guess? I spent nearly ten minutes trying to navigate the underside of a train to where it seemed like I was supposed to be going, but because of a combination of an undefined objective, and some stock video game invisible walls, this was a goddamned nightmare.

OK, the negatives are out of the way. I’m still optimistic about the game overall, but this was all just a real bummer coming off of the mostly-issue free experience of The New Order. So what did we see that’s totally worth getting excited for? A big weird game full of big weird set-pieces and ideas that probably don’t belong together — but in that very particular way that only a Wolfenstein game could accomplish.

The first level of Wolfenstein: The New Colossus sees BJ wake up on a captured U-Boat occupied by the resistance being… re-captured by Nazis. As B.J., you are stuck in a wheelchair and must take down dozens of bad guys, navigate puzzles, and reconnect with everyone in your life in a matter of minutes. It’s an effective, quick line back into this world that re-introduces mechanics in a limited way before building upon them with a bunch of new fun stuff on top — like violent and amusing environmental traps.

The intro level introduces us to a soon-to-be new ally in the form of a German girl whose Nazi mom, the terrifying Frau Engel, fat-shames her for a solid five minutes about the eating of cake — this is like right at the start of the game. Wolfenstein is a world with weird Nazi spaceships, and you’re killing all these dudes and shit, and then there’s this strangely manufactured bit of oddly specific terrible bullshit that you encounter when you’re in danger of being executed. I am legitimately fascinated to see what the studio does with representation here because it is either building towards something meaningful or going to miss the mark — with little ground in between. In a game about opposing domineering, systemic oppression, if they’re going to address representational issues big and small, they need to get it right. The pieces are in the right place, though: The Resistance is several parts New York cliche Jewish man, a heavy-set (possibly gay) woman, a black woman, a mentally disabled man, and a physically handicapped B.J.

That said, the writing is quick and pointed. The play between comedy, dark alternate world Nazi grimness and some interpersonal relationships are all balanced nicely. The dialogue especially between unsuspecting Nazi NPCs can range from stomach turning to outright humorous, and let me tell you, Machine Games doesn’t shy away from light references to sad-but-true real world rhetoric from current-day Nazi — like Nazi feeling oppressed for having “a different opinion.” 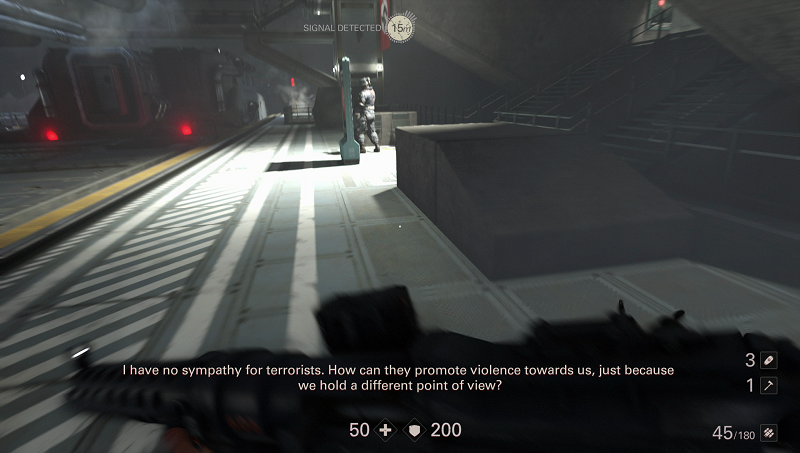 It is this snappy writing that had each small sequence leave me itching to see what happened next; the story propels you forward at a rocket pace to satisfy. The fun factor is equally plotted out, with a change in playstyle coming every few minutes. The guns pack a punch and instakills feel good as hell. It’s especially satisfying smashing a Nazi’s face against their own gun while their buds are around the corner talking about how “subhumans” are no match for “pure-bred Germans.”

Later in the game, we played through the street parade scene (where we couldn’t provoke the bugged Nazis). This story section leads into an Area 52 alien subplot that promises everything from hover boots to crazy plasma weapons, plus a portable nuke for B.J. to jam up the asses of the Nazi high command. It’s worth noting that this is the point in the demo where I finally gave up on the second lowest difficulty setting and moved to the first. In the default difficulty setting,  B.J. starts each respawn with 50 out of 100 points of health and oh wow does that get you torn to shreds quickly. The New Colossus is not an easy game.

Underground, I battled through train stations, on a train, and through a secret nuke lab. Everything here was filled to the brim with weird robot terminators that my weapons could barely scratch. Meanwhile, I melee killed every human enemy up-close with a goddamned axe as if they were made of sponge. On the lowest difficulty level, it wasn’t too hard to burst through these linear segments like I was back glory-killing my way through nu-DOOM. I also ran directly under a boss and triggered a cut scene that allowed me to skip what was probably supposed to be the highlight of the level. Not sure you’ll be able to do that when, you know, bullets mean anything on harder difficulties. I didn’t intend to do this, either. That’s just another one of them there level design issues I brought up before.

The end sum is that there’s a big, brilliant adventure here and I enjoyed every second — of what it intends to do. Getting the full game to a more playable state will be a large task for Machine Games from now to launch, but there’s so much else — from the writing, set pieces, to gunplay — that’s finely polished, so I’m not all too concerned at this point. Consider this preview maybe just a heads-up in case there’s any release delay, which I would welcome if needed. Nuking a shit-ton of Nazis should feel nothing short of glorious. 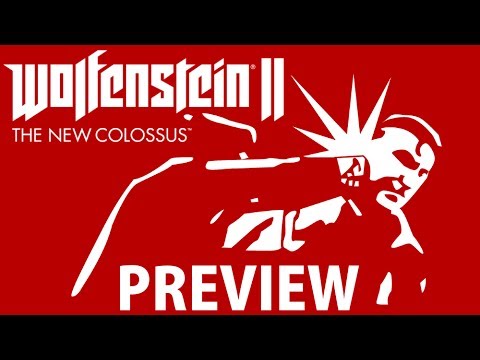