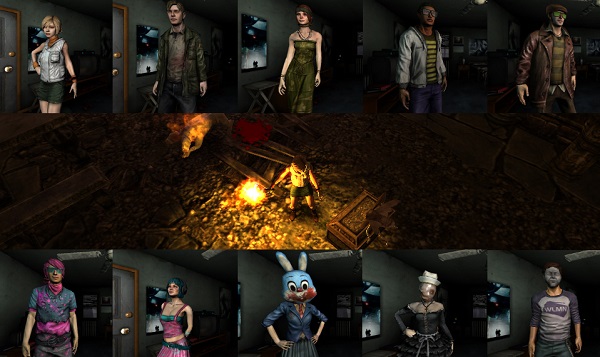 The Silent Hill series does not have a good track record when it comes to patches, so imagine my surprise when the latest Silent Hill game, Silent Hill Book of Memories stealthily received one. I was immediately filled with questions as to what fixes were included in the 339MB download. Along with said fixes came a mention of upcoming DLC (available today). So, I reached out to Konami and got a few answers from WayForward’s Adam Tierney, the director of Book of Memories on what changes we could expect and to find out what the DLC has to offer.  Check out the details below.

RoH: What kind of changes to the core game are coming from the upcoming patch? How many, and what concerns stated by players and reviewers are going to be addressed?

The main change is the integration of the new DLC elements, which include additional characters, costumes, weapons, artifacts, forsaken rooms, notes, accessories, etc. Pretty much every major system in the game was added to. To access those additions in your own game, you need to buy the DLC. But downloading the patch allows you to see those elements when playing in someone else’s DLC game, or when they bring those items into your game. The maximum player level has also been increased, and there are a handful of new trophies (including rewards for getting 100% light or blood notes).

Beyond DLC additions, we made a number of tweaks based on gamer reaction and our own playtesting, which add up to a slightly kinder game experience. The biggest adjustment is that when you die in a single player game now, you’re kicked back to the start of the stage without any progress loss. You’ve still dropped most of your items (as in multiplayer), but you can head back to where you died to re-collect those items. This adjustment also means no more re-loading the stage after death. Other adjustments include a retooled poison trap (it’s not a single-hit kill anymore, and its effects don’t last as long) and lots of re-balancing of elements throughout the game (such as enemy HP and damage) to iron out any problem areas.

RoH: Do any of these changes go against conscious design decisions found in the game, pre patch?

Not really. We’d always intended for the game to be tough, but never unfair. And a few of these elements (such as the poison trap) occasionally proved unfair, when coupled with other elements in the game (like being on fire). There’s a little less consequence for dying now, but ultimately that’s outweighed by the previous frustration of losing 20 minutes of progress due to one bad moment.

RoH: What can people expect to be found in the DLC? How much of this came from fans and how much were residual ideas that didn’t make the full game’s release?

It’s a pretty beefy update. We’ve doubled the playable characters, including protagonists from previous SH games (James and Heather). And there’s a ton of new weapons, artifacts, forsaken rooms, notes, accessories, and more. Many of the added items are SH fan-favorites, such as the Princess Heart abilities (all three attacks), throwable TVs from Origins, and the Beam Saber from SH3. The TV Remote is probably the most unique weapon in the game, and it’s brand new to this game. I won’t spoil its functionality here – find it and try it out!

Most of these were ideas we had during the initial game’s production. However, a lot of fan requests have serendipitously lined up with what was already planned. One of the goals with this game has been getting as much Silent Hill lore into the product as possible, and this DLC pack gets us that much closer to achieving that goal.

RoH: Has multiplayer seen any changes or tweaks?

All the adjustments and additions mentioned above are folded into multiplayer games. So as people purchase the DLC pack, you’ll begin to see more and more people using these characters, weapons, and accessories in your game. There are no specific changes to the way multiplayer functions, though.