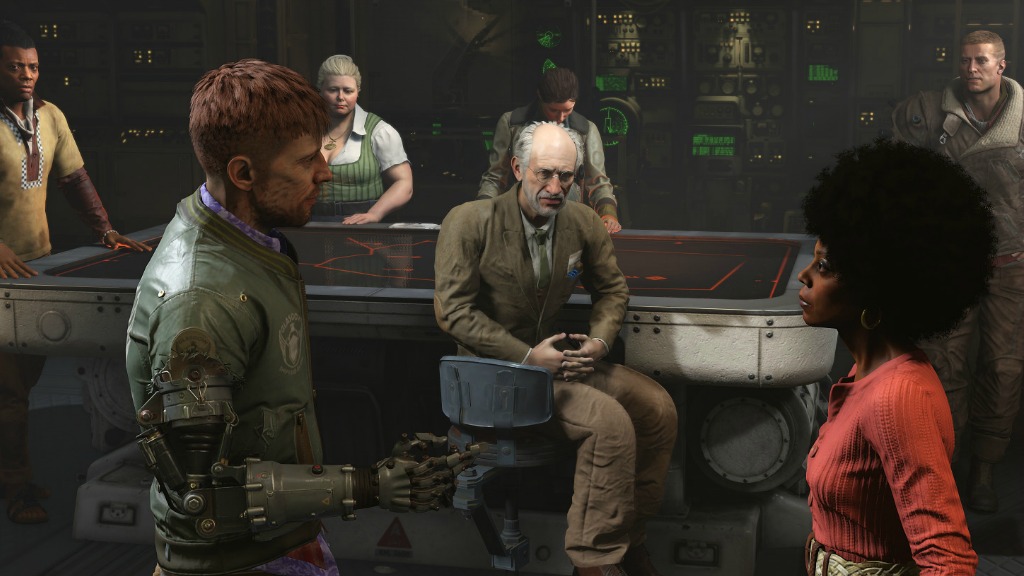 During my time at Quakecon 2017, I had the wonderful opportunity to sit down with Jens Matthies, the creative director of Wolfenstein II: The New Colossus and talk a bit with him about the upcoming shooter. During our interview, we hit on the impact of modern Nazis on the game, artistic challenges, and what it was like when Id Software passed the Wolfenstein mantle to Machinegames.

Enjoy our full interview below, and if you haven’t already, read our hands-on preview of Wolfenstein II: The New Colossus here.

Q: We’ve seen that The New Colossus is looking to go bigger and crazier than before, how do you strike that balance without losing sight of the more heartfelt moments that made The New Order‘s story shine?

Well, that is a challenge. I think that is exactly the kind of challenge we enjoy solving. Our goal for this game is not only to make it grander and more over the top, but also more intimate. So yeah, hopefully we are able to provide both of those.

Never. We’ve been doing it for so long, we know the best game results in when the whole team is focused on one thing. So very early on that’s what we decided we wanted to do. Fortunately we have this amazing publisher that let’s us do the right thing.

Q: Recently there’s been a lot of news about the alt-right and neo-naziism in America. Has there been any hesitance on the part of the team, and have there been any delays talked about based on the political climate?

No. I mean, we are very confident in the game that we’re making. The game is what we want it to be, and whatever happens around us doesn’t really affect that.

Q: The KKK and Nazi’s are sensitive subjects regardless of the political climate. What’s being done to make sure these elements are impactful and not just trivializing.

That’s a good question.We decided early on that we didn’t want to, sort of, ‘cartoonify’ Nazis or Nazi ideology. That wasn’t the approach we wanted to take. We wanted to take the subject matter really seriously. Even though it’s on this grandiose scale, and the game is not realistic, that’s not what we’re after. We wanted something that felt truthful and that took these themes seriously, and we worked very hard on that. So we feel confident in what we’re doing. 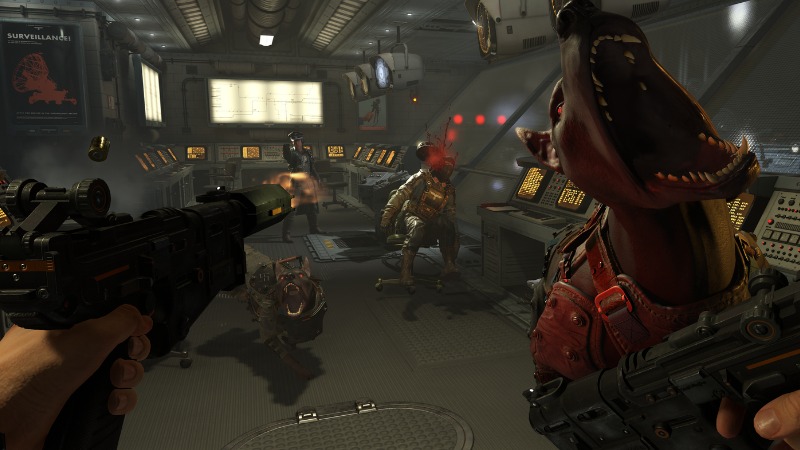 Q: The New Order offered players an important choice at the beginning of the game that would affect characters in later chapters. Are there new choices that will affect the story in The New Colossus?

Yeah, we carry on that same dual timeline in The New Colossus. So early on in the game you can put yourself on the path that you prefer. So either, Fergus is alive or Wyatt is alive, and this has bigger gameplay implication in this game. Where in the first game we had the signature weapon called the Lazerkraftwerk, that is both sort of a puzzle solving tool and also a pretty devastating offensive weapon. And we still have the Lazerkraftwerk in The New Colossus, but it’s tied to the Fergus timeline. So if you’re in the Wyatt timeline you have a different signature weapon called a Dieselkraftwerk, which is in the demo I think.

Q: The New Colossus is the first direct sequel to a Wolfenstein game and the third game in the series from Machineworks. Is there a sense of ownership over the series and its direction that may not have existed when you first took over the franchise from id?

Yeah, absolutely. We idolized Id software, we’re big, big, big Id software fans. So having this opportunity to work on one of their IP was just mind blowing for us, and it was incredibly important to us that we didn’t do anything that they wouldn’t approve of. So that was part of the process for The New Order, but once we came to making the New Colossus, they were like “that’s your baby now, do your thing.” I think they feel like we are, at least currently, the wardens of BJ Blazkowicz and his adventures.

Q: That’s got to be a crazy feeling. For this series to be the grandfather of first person shooters, decades old by the time you get your hands on it, and now it’s your baby.

Yeah, It’s unreal. My whole reason for getting into game development was because of Quake and the fact that you could modify Quake and build your own levels and build your own maps and that kind of stuff. Back then, the Id guys would have the “point plan” files, which were like the precursors to blogs, and they would write their updates about what they were working on and their ideas about where games were going and whatnot. To go from that, where these other people on the other side of the world are doing amazing things and all the sudden they’re your friends and you’re working with them on stuff. It’s just an amazing fairy tale.

Q: How did the team land on using New Orleans as a major location in the game.

We knew the game was going to be set in the US. So we looked at every possible location that we thought could be interesting. We felt like New Orleans could be turned into a really strong level. 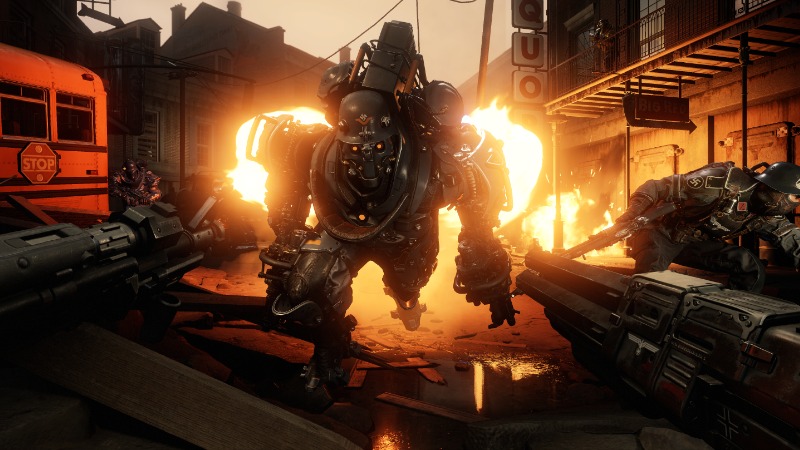 Q: Hypothetically, if BJ encountered Mecha-Hitler in The New Colossus, how would he react?

Q: What is being done for enemy design to ensure that encounters still feel challenging and fresh while being familiar to players?

That is a hard creative challenge to solve, but we put a lot of work into that. We feel really good about the enemies we have in this game. We put a lot of effort into interesting movement, so depending on the type of enemy you encounter they will move in very different ways and respond to your actions in different ways. So there’s a lot of tactical thinking involved in defeating them.

Q: In the E3 trailer and in the demo, we see Nazis and KKK members both openly walking the streets of America. How has this kind of oppression affected minorities and people of color in America?

They are the victims in this new society that’s being created, and those are the people that you are sort of trying to connect with and unite. The whole goal is to try and start a revolution in the US, and once the US is liberated, use that as a platform to liberate the rest of the world.

Q: Other than WWII, were there any other events or influences you looked at to depict the Nazi occupation of America?

For sure there are commonalities in all totalitarian states, but we primarily focused on Nazis. Nazis took over a lot of countries. What their propaganda strategies were, but of course it has to be different for the US. But that’s also part of what makes it interesting, because so deeply in the [sic] DNA is the idea of freedom, it’s sort of a foundational principle of the country. So how does this Nazi oppression apparatus function in a society like that? What kind of tricks do they use to get the public on their side?

Q: What is the New Colossus doing to stay in touch with its classic retro FPS roots, while still giving players a modern experience?

I think a lot of the heavy lifting was done in The New Order. We asked ourselves that very same question. How do we make the game feel 100% like a Wolfenstein game, yet still have a lot of interesting gameplay mechanics in it? So for this game we’ve migrated to a completely new engine, we’re on Id Tech 6 now, were the previous one was Id Tech 5. So that means we had to rebuild all the systems. So we’re able to iterate a lot more on everything. 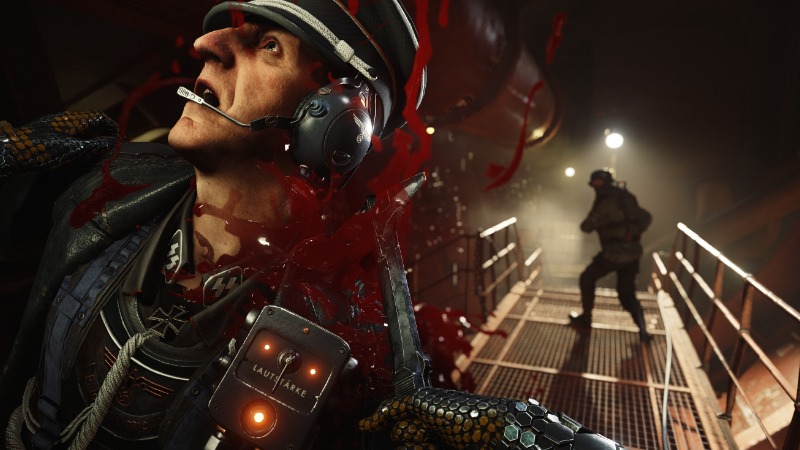 Q: Is there someone who inspired the personality of Super Spesh?

That’s interesting. We don’t have a clear inspiration for the personality. We have a lot, me and Tommy my writing partner, we’ve played around with his character a lot, sort of trying to figure out exactly who he is and what makes him tick. In that, it wasn’t like we looked at some reference, but it’s more like what made us laugh and what made us interested in this character. He kinda grew out of this spitballing back and forth.

The name, however, is inspired by a real person.

I think there is a lot of subversion happening in the game in many different ways, and that’s also what makes it so interesting for us is to so it. Especially because it takes place in the 1960’s. In the real world, we know the 1960’s for a lot lot things like the Civil Rights movement, and the tremendous cultural movement that occurred in the 60’s. And just looking at those pieces and seeing, like, how the Nazi’s would subvert that in their propaganda machine. So that continues.

Q: The New Order and The Old Blood have plenty of callbacks and references to Wolfenstein 3D. Will The New Colossus continue this trend?

Absolutely. For sure, there’s some pretty cool Wolf 3D references in there.

Q: Where did the inspiration for the hatchet come from, as a melee weapon?

Yeah. Jerk came into my office one day and said “can we have a tomahawk?” I was like “What?” He said “Yeah, I don’t want this knife, it feels so wussy, I want something more substantial.” Then we started brainstorming and we were like, yeah let’s do a hatchet. And we are very happy that we did, it gets a lot more visceral.

Q: …And the Automatic Shotgun. How did that come to be?

I always push for that kind of stuff (Laughs). But of course, we’ve had the ultra shotgun in both The New Order and The Old Blood, and in some ways I liked it even more in The Old Blood because it was a little bit more refined there. And now they’ve just pushed it to a whole new level. It’s really, really cool.

Wolfenstein II: The New Colossus releases October 27 on PS4, Xbox One, and PC. You can check out the rest of our QuakeCon coverage here.