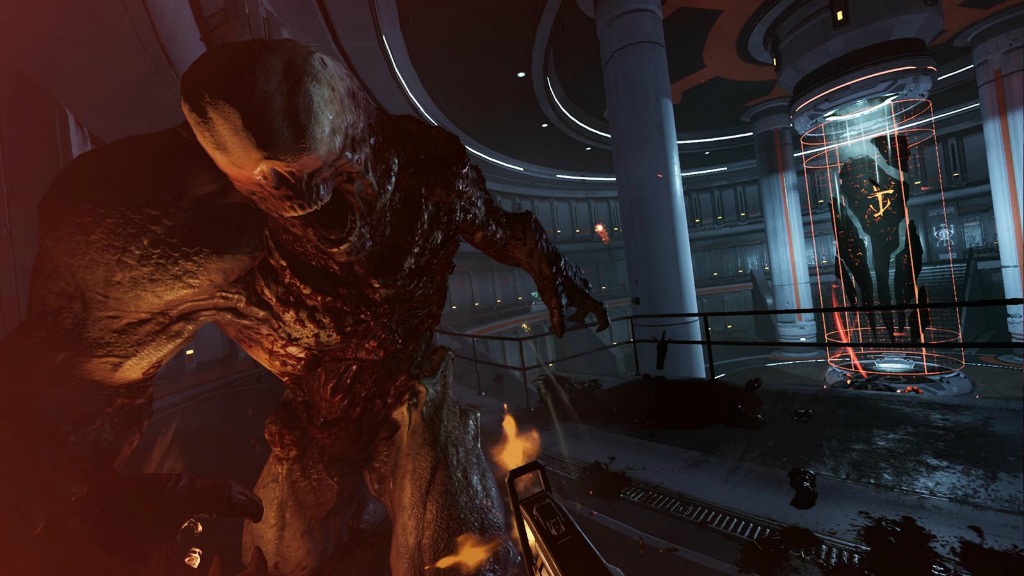 As a lifelong DOOM fanatic and avid fan of the series’ 2016 reboot, I was initially hesitant about how the fast-paced demon shooter would fare in VR when it was announced. The opportunity to feel the scale and atmosphere of 2016’s DOOM in virtual reality is certainly an exciting prospect, but how would the strafe-heavy gunplay and speed transfer to a movement system based on teleporting around the environment? After having a chance to play a demo of DOOM VFR at QuakeCon 2017, I can safely say that all my potential worries have laid to rest; this is an all-new way to experience the classic twitch shooter formula.

The demo starts, and I’m inhabiting some kind of drone, tasked with escaping the room by restoring power. It’s a simple objective that gets players familiar with the basic controls quickly. Playing on the HTC Vive, the left controller is manipulated to teleport me around the environment, while the right is for weaponry. Rushing around the environment feels natural thanks to the demo’s silky smooth framerate and effects that give a sense of inertia. Guided by the demo station attendant I leave the room, walking down a blood-covered UAC hallway to my next objective.

It’s the first time I really stopped examine the scope of my environment. Last year’s DOOM was incredibly detailed, but I never fully appreciated the graphical flourishes until seeing them in VR up close. Simple things like sparks flying across the screen and the various mutilated bodies lying about had me stopping for several seconds to appreciate the level of detail put into the environments. Despite moving through a teleporter, it genuinely feels like moving through and inhabiting a space, something I didn’t know I wanted from a DOOM game.

I enter the next room and head to some kind of robotic suit nearby, transferring my consciousness into it. Like clockwork an Imp spawns in a shower of red-hued particle effects; with my new found hands I pick up a nearby shotgun and shoot it in the head. While it’s somewhat awkward visually to shoot such large weaponry with one hand, the shooting itself is as accurate and satisfying as it’s ever been, bolstered by the visceral impact of seeing demons fly apart right in front of your face. More enemies spawn, and I dispatch them quickly. There is a good sense of challenge without ever feeling overwhelmed. 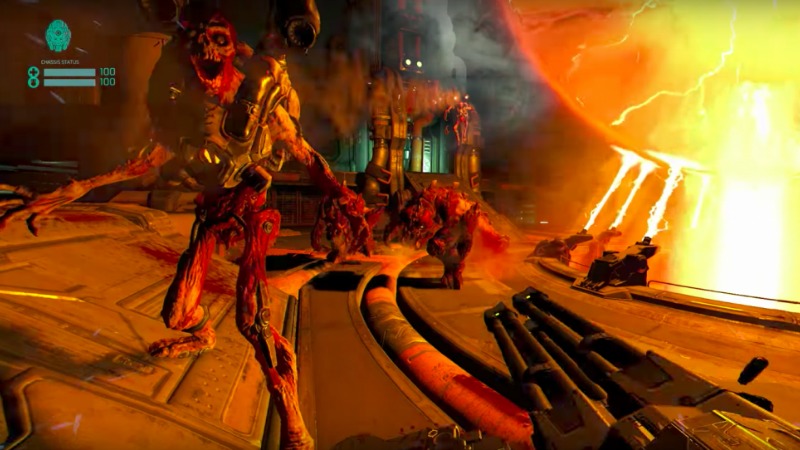 Moving with teleportation has a few effects on gameplay in the heat of combat. First, glory kills have been completely done away with. Instead, when enemies are staggered players can lock on and teleport inside of them. It might not have the same impact as ripping a Hell Knight’s head off in VR, but it is still good fun and ultimately feels more dynamic than VR Glory Kills would have. Once I telefragged a Mancubus and was left standing inside of its bloated, topless corpse, I was completely sold on the execution.

Secondly, with no ability to strafe, I was left to teleport behind enemies to dodge attacks and retaliate. The teleportation feels smooth, but the problem lies in having to rotate your head back around to shoot the enemies you were dodging. The result is this strange dance which left me twisting and turning back and forth as I dodged Revenants and Pinky demons, maneuvering behind them for a perfect kill shot. After a few minutes, I was used to the practice. I don’t know how I would feel about it in a longer play session, however.

Waves of demons continue to descend upon me as I am suddenly teleported to the next stage in Hell. I find myself in a huge cavern which had me stop many times to appreciate the environment design once again. I switch to a Minigun and hop across some floating platforms, blasting nearby Cacodemons in a fun little platforming section.

The remainder of the demo is spent in a more traditional arena setting as I try to find my way through the swathes of demons descending upon me.  With multiple floors and a jump pad, there is a greater sense of verticality than the previous environment. There is a much larger amount of health and ammo pickups scattered around the environments; a good thing because there are a few points where I am absolutely hammered with damage from all sides. The demo ends as I reach the top floor. Strolling into a normal-looking hallway, the lights go out and a Baron of Hell grabs me, screaming in my face as the screen cuts to the title “DOOM VFR.”

Last year’s DOOM was a world-class shooter, combining fantastic enemy encounter design with robust shooting mechanics. DOOM VFR builds on what that game accomplished to deliver a first-person roller coaster ride through hell. Having a Revenant screaming in your face, or teleporting inside of a Hell Knight and seeing the remains scattered around you are just a few of the special treats VFR delivered; I’m sure there are plenty more in the full release. I was left unsure about how all the twisting and turning would fare during extended play, but my time with DOOM VFR had me hungry for more.