Preview: Hunt: Showdown’s Alpha is a Horrifying and Splendid Mess 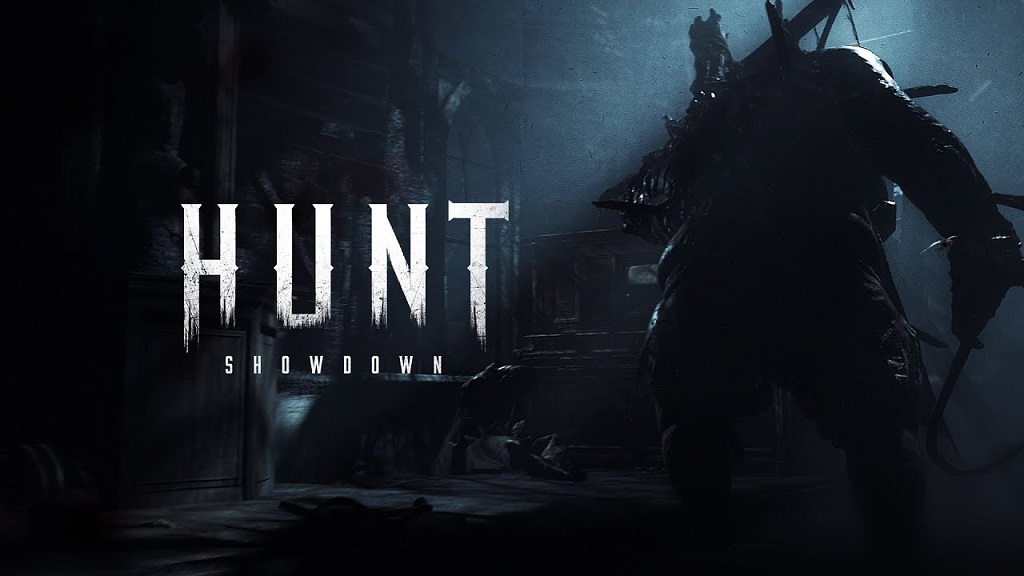 In 2014 I attended my very first E3 with then-staff member Zack Furniss. Among many of the video games we saw, Hunt: Horrors of the Gilded Age by Crytek stood out to us as one of the most interesting at the show. Horrors of the Gilded Age could be quickly described as a F2P Left 4 Dead meets Lovecraft in the American South. As we left the show with fun stories to tell and new games to await, Hunt went down a path that would lead to its death and eventual rebirth. It’s now early 2018 and Hunt, though changed, is back.

Hunt: Showdown carries over many elements of Horrors of the Gilded Age such as its setting in Louisiana, its monster-hunting premise, and its focus on being a multiplayer experience. But instead of teaming together four player characters with a unified mission, Hunt: Showdown trades the safety of a squad for the tightness of duos. Up to five teams of two enter the game world at once, and players are no longer bound to respecting their fellow man in their fight against the unholy. A looming threat of PVP encounters has been woven into Hunt a la survival games like DayZ and PlayerUnknown’s Battlegrounds to truly ramp up the dread factor. While those two games are not known as “scary,” the inevitable conflicts in both keep me on edge more so than any traditional survival horror game has in … ever. 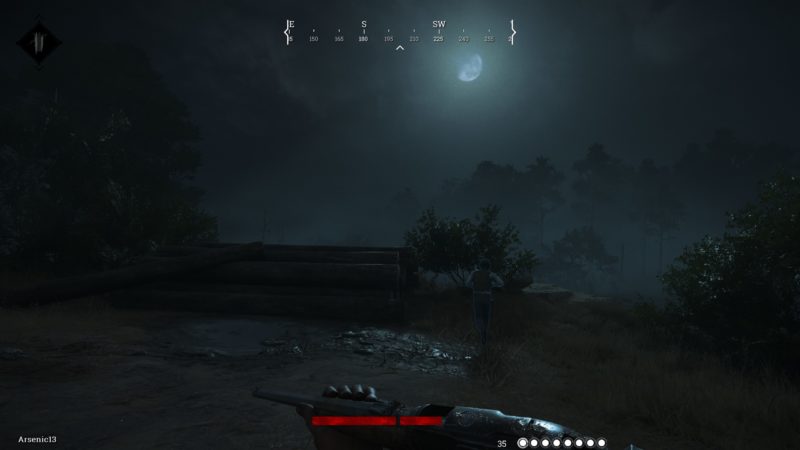 Upon booting up the Hunt: Showdown alpha, you must hire a recruit to act as your player character. Recruits cost in-game currency, which is obtained by completing objectives. If you die within a match, that recruit is dead for good, and a new one must be hired in his or her place. If you run out of money, you can still hire recruits of a lower caliber to get you back on track. Horrors of the Gilded Age was intended to be a F2P game, and to my surprise Hunt: Showdown will be a premium title. Good; let’s hope it avoids excess microtransactions and loot boxes.

The alpha features four playable missions — two set in the day and two set at night. But due to the alpha’s technical shortcomings (which I’ll elaborate on later), I ultimately gave up on trying daytime missions as the game’s performance was abysmal, ostensibly due to complex dynamic lighting. Night missions, on the other hand, perform decently (for my overclocked i7 7700K and GTX 1080 Ti- powered rig — yikes) and upon starting reveals a multiplayer game almost unbelievably gorgeous. That’s CryEngine for you, though; it’s capable of stunning visuals at the risk of being woefully demanding. 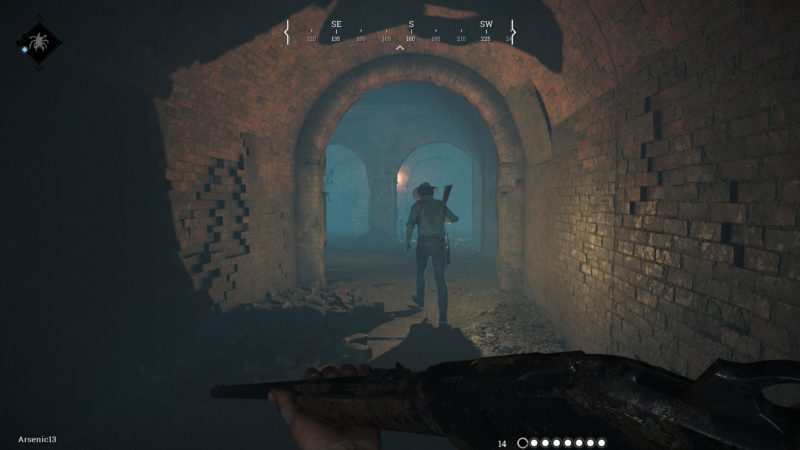 As my partner and I entered the dreary Louisiana swamp Hunt: Showdown is based in, we were overwhelmed with its 1-kilometer size and fearful of its denizens. The moans and gurgles of the undead could be heard all around us as ghouls patrolled aimlessly in wait for their next meals. I can’t tell you what half of them even looked like, but their moon and lamp-lit figures, even from a distance, were creepy enough. Our objective was to find the map’s ungodly monster target and banish them. I wish I could tell you we were successful even once since we started playing Hunt last weekend, but we were not. Regardless, we keep coming back for more.

The swamp has multiple locations such as farms, crypts, and mills that serve as landmarks for where objectives reside. Blue gateways (or clues) that peer into hell are scattered across the map, and with each one cleansed the in-game map visually reduces in size to narrow down the location of the target for banishment. As the number of clues dwindles, the odds of PVP encounters increase. 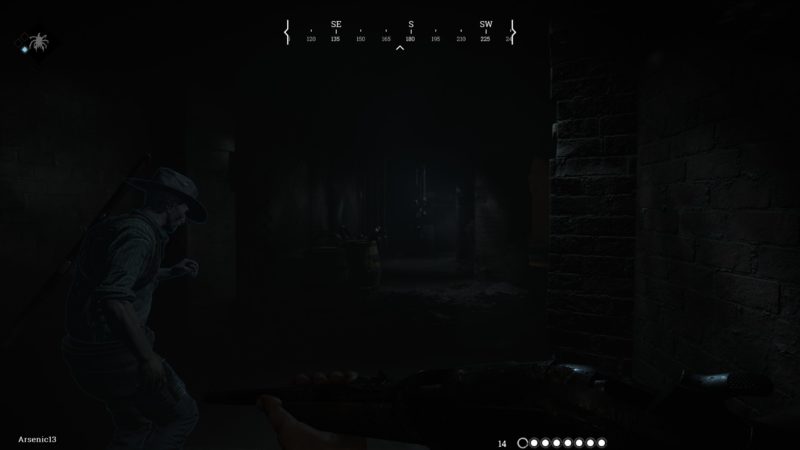 Going back to the game’s stunning presentation, care to bringing Hunt’s world to life appears to be two-fold. Binaural audio plays a significant part in the game, not only to spook players with ambient tracks or monster sounds but as an integral component in multiplayer encounters. As my partner and I stalked a decrepit mill in search of a clue, we noticed that the chains that adorned some rooms could give away our location if we bumped into them. The loud rattle of chains in an otherwise quiet structure, the ability to scare flocks of crows causing them to loudly disperse — the world was full of traps based on sound that we would normally never consider in a multiplayer setting.

As we made our way from objective to objective, gunshots cracked in the distance. The compass placed at the top of the screen once again reminded us of PUBG, in that we were able to place our opponent’s location on-the-fly with rough numbered directions. At no point did we ever feel powerful or safe while playing Hunt: Showdown. As we quickly learned, we were mere mortals subject to the stopping power of a single well-placed bullet — or in my case a swarm of bees that poured out of a porous rotting monster. 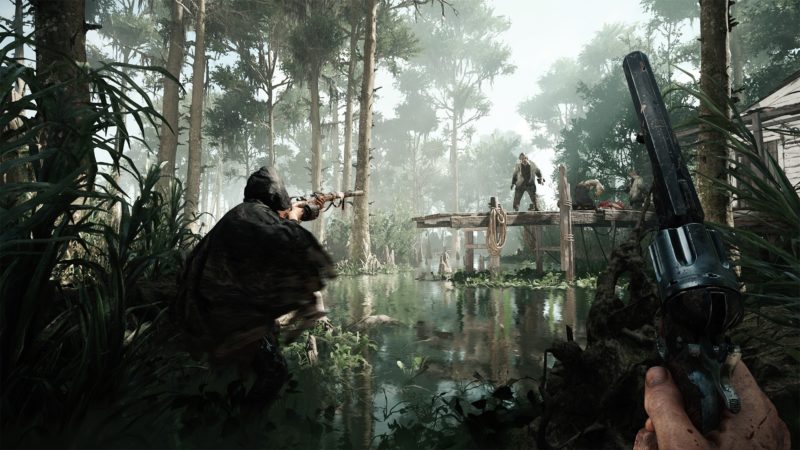 Each recruit starts with a loadout that includes a primary weapon, a side-arm, a tool, and consumables. The in-game store sells each type of item, but I didn’t spend too much time in there as I fully expected to lose it all in the next game session. PVP encounters are really, really tough. As mentioned, it’s very easy to die in Hunt: Showdown. The state of the alpha’s optimization doesn’t make the game any easier either. 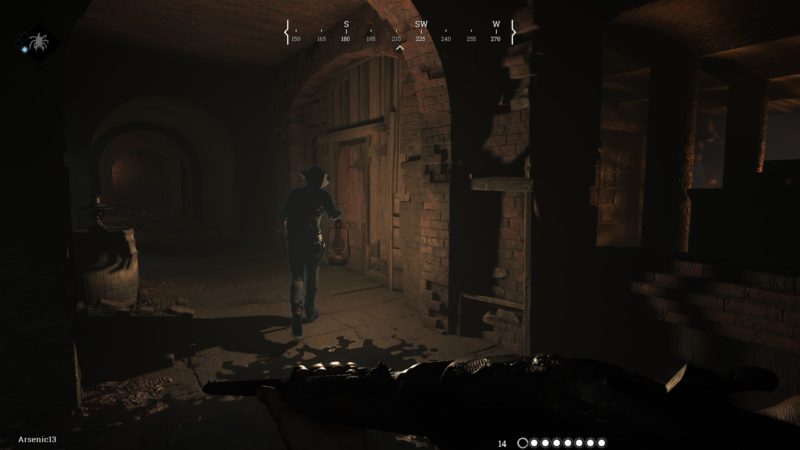 As it currently is, the Hunt: Showdown closed alpha is an absolute mess. Daytime missions are unplayable for me, and the night time missions barely manage to maintain 30fps. Performance dips are frequent and loading times are excessive. Hit registration is also all over the place, making encounters a game of luck rather than skill. All of these issues beg the question why Crytek thought to bring players into the game at this point. Honestly, I think they just know how freakin’ good the game is regardless. A cocky move, but admittedly it’s true. Typically I’d walk away entirely from a game that performs as poorly as the Hunt: Showdown alpha does, but it’s such a fundamentally engaging experience that I feel compelled to keep playing. Props; the gamble paid off, guys.

Hunt: Showdown may be at its earliest stages of playability; but man, is it promising. Crytek is looking at a game that has all of the trappings of a strong AAA survival horror game that also happens to be multiplayer in a best-fitting way. It’s a frightening game through and through. Due to the way recruits and the store system is set up, though, I’m still cautious about the game’s potential to adopt obnoxious pay-to-win content. But I’ll remain optimistic.