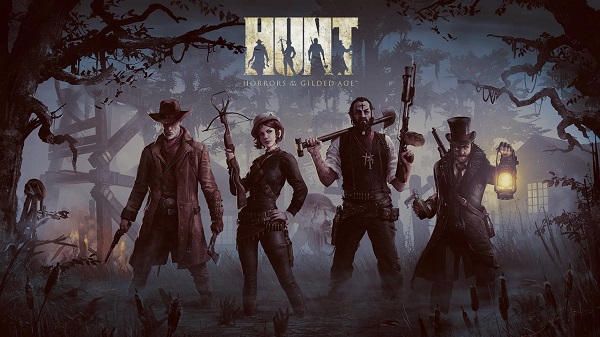 One of the many games we had a chance to preview at E3 was Crytek’s new free-to-play horror shooter, Hunt: Horrors of the Gilded Age. Though the very words ‘free-to-play’ ward off some gamers in droves, I alway appreciate a chance to shoot scary things in the face with some friends, so I went in hoping for the best. While it is much too early to definitively state that Hunt will be worth your time, I left Crytek’s booth feeling overwhelmingly positive.

Hunt is a globe-trotting, monster-hunting, four-player adventure set in the late 1880s. The player characters shown in this hands-off preview were four men wearing varied outfits, ranging from cowboy clothing to what looked like a German doctor’s outfit. I initially assumed that these were established characters that players would chose from, but later found out that all characters are customizable, and women will also be playable. Clothing, weapons, items, and skills are all going to be customizable, though this was not shown in this demo.

Beginning in a Louisiana swamp, our four monster hunters waded through murky waters and a pale mist, approaching a dimly-lit, ramshackle village.  Their mission is to kill the Nightmare Witch, who resides somewhere in their near vicinity. Immediately upon entering the threshold of this backwater community,the hunters were greeted by crazed villagers with brandished tools. A skirmish ensued, with normal country bumpkin types and large, hammer-wielding men doing their best to kill the hunters. Our heroes responded in kind with revolvers, lever action rifles, and crossbows. During the fight, I quickly recognized that Hunt isn’t trying to hide their influences at all; from enemy movement to the general atmosphere to quick-time event grapple breaks, you can tell that Crytek has been playing some Resident Evil 4 lately.  Even the window-breaching movement is similar, but instead of somersaulting through like Mr. Kennedy would, the characters sort of walk up to the window and fall through it, even when no enemies are around. It looks ridiculous but I sort of hope it stays in there so I can giggle every time it happens. There’s also a dodge mechanic that is very similar to the animation in Alan Wake. Of course, if you have to take bits and pieces from other games, there are much worse titles you could choose from! 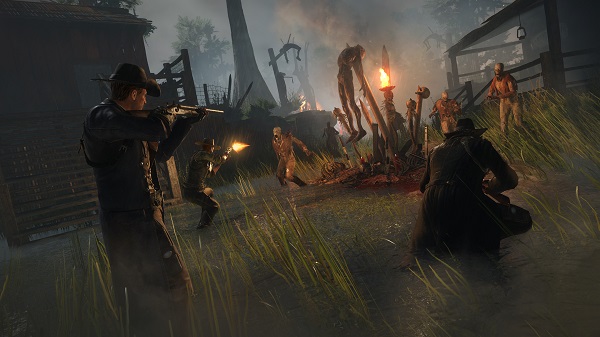 Throughout the demo the over-the-shoulder camera swapped from character to character so as to let us see all angles of the action. In the course of the battle, the doctor-looking character was grabbed by one of the hammer giants and had his neck broken. While a grim fate such as this would be a permanent fixture in real life, this is a video game, so characters are able to respawn later in the level. The way the game goes about it similar to Left 4 Dead, but done in a more stylistic manner. Suddenly watching through a first-person perspective, we were peering through a cross cut-out in wood just a few inches from the player’s face. Another player ran up to him, and we saw from his viewpoint that his newly-respawned teammate was locked in a coffin. After shooting the lock off, the formerly-deceased doctor was free to once again join the fray. Players won’t always respawn in a coffin; we later saw a respawn point where a character was strung up by his feet and had to be shot down. As long as these spawn points are varied, they’ll be a nice way to change up the pace.

Later on, we saw an example of an equippable item when one of the hunters smashed a glowing…something, and a wispy spirit flew out, guiding them towards their quarry. The group had cleared out the small village and its denizens and progressed into another murky swamp area. Zombie-like creatures rose from the shallow murk, and the cowboy fella whipped out an anachronistic flamethrower. I later found out that even though the game is set before the 20th century, we will be seeing plenty of “future tech” that was utilized in World War I. Occult weapons and items are also likely to be discovered further into the game. Numbers weren’t thrown out, but I imagine there will be plenty of options to keep players diverse.

The four maybe-heroes entered a graveyard as a gate shut behind them, trapping them within. Here, they found the Nightmare Witch: an ethereal, floating woman with a large stone tied to her feet, complete with sentient chains on her back, whipping to and fro like tentacles. This isn’t the sort of game where you’d try talking to the witch and asking her why she’s been plaguing everyone’s dreams. It’s the sort of game where you immediately shoot at her witchy face. She was able to grab the players from afar with her chains, and sometimes she would pull one of them into a dream realm, where only that player would be able to see her. If he didn’t shoot her, no one else could see her. This scenario has me curious to see how the boss fights will change up the players’ tactics, but the demo ended when the witch grappled one of the characters and pulled him close to her face.

Hunt is clearly pulling from other games, but the concepts they are sewing together have the potential to be a hybrid of the games we love. Provided they can deliver on their promises of vastly different areas (London! New York! South America!) and the levels consist of more than ‘kill the dudes then kill the bigger dude,’ I think we might have something special on our hands. Free-to-play doesn’t have to be a death knell. It’s up to Crytek to prove that.