Inside the Indie Studio, with Ebb Software (Scorn) 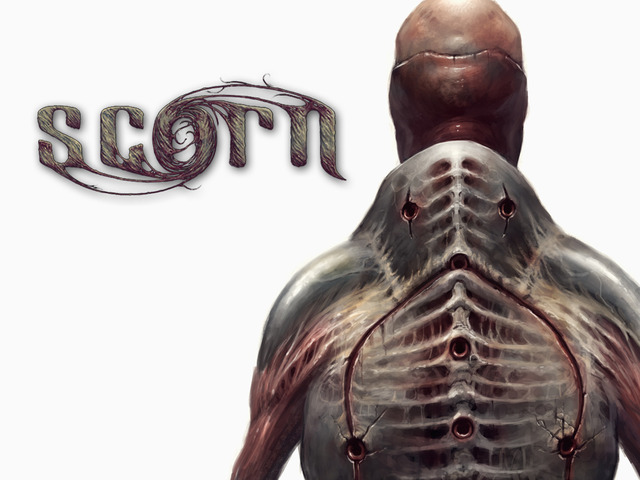 Scorn was introduced to us in a very interesting way last summer. Since then, interested parties have been waiting to hear more about the game that was too weird and not marketable enough for investors. After a short trailer release earlier this week, Scorn has now launched its Kickstarter campaign, asking for €200,000 to fund development.

I talked to Ebb Software’s Ljubomir Peklar, game and level designer, about the team’s plans, the game’s mechanics, and the team’s troubles getting the game funded by investors and publishers. Check out the full interview below.

When we first learned of Scorn, you guys revealed it by doing so in a mysterious and vague way, forgoing the formal announcement and “leaking” concept art for an untitled project. Why announce the game in such a way, and do you think being mistaken for Sony Bend’s unannounced project was beneficial to garnering interest?

1) We wanted to show potential investors at the time that targeting niche part of the market could be quite profitable. Some investors had nothing to do with the gaming industry, so we need to show them first hand that this kind of game has an audience.

2) We wanted to get unfiltered impressions of the game. Indie market is quite saturated and there’s a certain stigma surrounding horror indie games, so standard announcement wouldn’t have the same impact.

As for Sony Bend, it was just an accident. It was beneficial at the moment because people talked about our game and we managed to get in contact with Sony because of it.

Speaking on your contact with Sony, which was sparked by the NeoGaf thread we had posted in hopes to solve your enigmatic emails, what came of that? Last we spoke Sony had expressed interest in the game.

Sony sent us an inquiry form about the game. We presented them our game pitch and never heard from them since. I’ve sent e-mails to them from time to time inquiring about our project but got no answer. Not even a simple: Thank you. We are not interested. That’s all there is to tell about that story.

That’s unfortunate. Perhaps when they see more, as a result of the Kickstarter, they’ll show interest again.

Speaking on the Kickstarter, you guys have shown off the game’s environmental design and described the game as an open-ended world with indirect storytelling the likes of Dark Souls and Metroid Prime. What kind of variation to environments can we expect if the project is funded? And will story aspects be discovered via notes, set pieces, and/or dialogue?

What we are trying to do with Scorn is to create a cohesive lived in world, not just bunch of levels stitched together. Level design has to make sense on both macro and micro level. Every environment will be quit unique but it also has make sense as part of a greater world. We rarely re-use assets and we don’t use standard building blocks for the level design. It’s a quite time consuming and because of that Scorn will have about 10 hours of gameplay or 5 hours for the first episode. We want to make every experience inside our world memorable. There won’t be any unnecessary padding to prolong the game. Story of the game is told through environment. That’s one more area we are borrowing from the art of Giger and Beksinski. Like with there paintings it will be up to the observer(player) to give there own interpretation of whats going on. You can expect an odd and unique world to explore.

Scorn‘s concept art shows off weapons and mentions inventory management. What kind of shooter and survival mechanics can we expect? Also, what kind of enemies will there be?

As I’ve already mentioned we want to create a lived in, meaningful world so standard concept of wave after wave of enemies that attack you doesn’t apply. Every entity that inhabits this world will have different behavior. Some will be hostile, some will become hostile after you provoke them or do something inappropriate, some will avoid you etc. and that’s where the ammo and inventory management comes in to play. As you explore the game you’ll get a better understanding of when to use the weapon or other items and when to avoid doing so, because most things available to you will be quite limited. We hope to create a great balance between all these elements. When you decide to use a weapon it has to feel great. That is one of our top priorities.

Understood. I can only imagine what a living world with that design would look like. Disturbing no doubt.

Focusing on horror, what kind of themes are you trying to invoke? Based on some of the images, body horror appears to be one theme – the fear of one’s own self and changes to the self. And with an environment that looks so organic, that theme would be fairly prevalent. Am I on the right track in regards to that theme?

Pretty much. There are quit a few surprises on that front but we can’t spoil that now.

Excellent. That sound great. But now for the Kickstarter campaign itself: What can backers expect over the course of your campaign? Will we be seeing more footage and concept material as time goes on?

Will give some more snippets, mostly on the production part of the process. It was really hard for us to show as much as we did because part of the whole experience of Scorn if figuring out how things work in this world. If we show you that we are depriving you of that experience. That’s one of the biggest problems we have: How to present the game in best possible way without destroying the core experience.

I imagine there’s also the struggle determining what to show in order to convince people to back the project and what to keep a surprise, too. How did Ebb Software come to be? Were you all acquainted prior to Scorn?

Some of us knew each other before we started the production. At the beginning of 2013 the conditions in my life were such that I could dedicate a great portion of my time to a dream project. I decide to gather like minded people and see what we could come up with. Oculus Rift was also announced few months back, so it made that much more sense considering the concept I had in my mind.

You guys are very adamant on making the game you want uncompromised, and this is reflected in the rewards that backers can unlock – none having any form of influence on the direction or content of the game (backer forums, create-a-level, etc). This is a very interesting approach. Do you guys have any concerns regarding this, or are you confident in this no-feedback approach?

That’s the only way we want to do it. If we start making compromises the game will suffer. If that bites in the ass so be it.

Fair enough. I look forward to response to the Kickstarter and I’m very much interesting in seeing more of Scorn. Thanks for talking with us about it!