Inside the Brains of Rebellion’s Zombie Army Trilogy 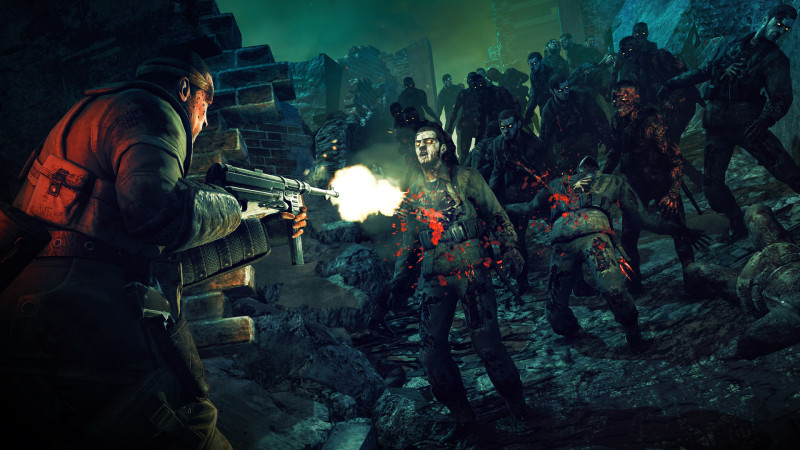 The Sniper Elite franchise is well known for its x-ray killcam, audacious Fuhrer-assassinating missions, and tactical simulation gameplay. It only seemed natural to the team to break away from the tried and true formula of popping heads off of Nazis, and move on to something a little more… undead. After all, if video games have taught us anything, the only thing that’s better than dispatching Nazis, is dismembering re-animated Nazis. Therein lies the mantra of Rebellion’s cooperative Zombie Army Trilogy.

We were able to chat with Tim Jones, Head of Creative at Rebellion, about Zombie Army Trilogy.

Q: What was the initial inspiration for making the first Nazi Zombie Army? How did the initial idea come about? Was it always intended as a trilogy?

It all started when we had some (rare) downtime for one of our teams so we thought it would be fun to experiment with adding zombies in to Sniper Elite V2. Beacause, y’know, why not? We love zombies, and they are great for conscience-free target practice… We threw in some spooky atmospherics to spice it up (initially this consisted of heavy fog) and found that we had the kernel of something really entertaining. Personally, as a long-standing horror movie nerd and obsessive, this was a perfect opportunity to explore and evoke a particular style of zombie movie that hasn’t had a great deal of attention in the modern resurgence of the undead: the weird and wonderfully creepy films of Euro-horror directors like Lucio Fulci, Mario Bava and Dario Argento. This might seem a little obscure and non-commercial, but I was confident that it was a perfect fit and that players would relish the unsettling world we could create. We certainly weren’t expecting the level of success that the game brought so it wasn’t planned as a trilogy from the outset – though we obviously left the first episode open-ended just in case… like any self-respecting potential horror franchise would do!

Q: In comparison to the entire Sniper Elite team, how many worked on Nazi Zombie Army? Was it more of a side project? An experiment?

It was small compared to the Sniper Elite team, and the first episode was put together in not much more than four months! It certainly started as an experiment for which we had no fixed expectations – but as it grew, we had to increase the team size too! 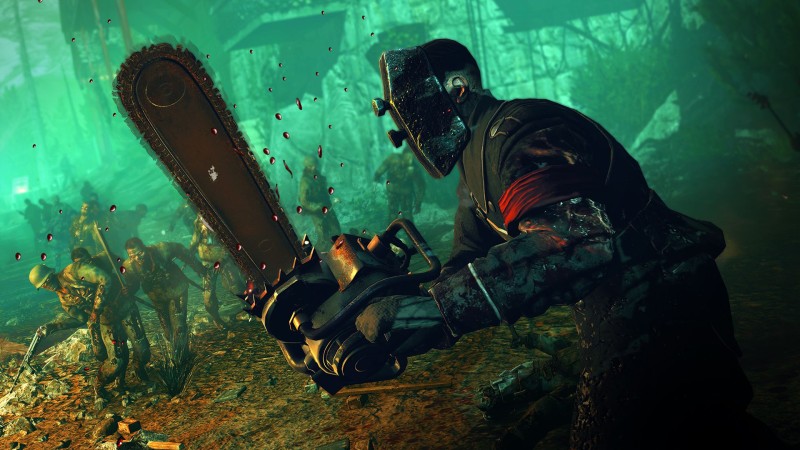 Q: The Nazi Zombie Army games were exclusive to PC up until the release of Zombie Army Trilogy. How has the reaction been from console players?

We had console players desperate to play it as soon as the PC version released which was very gratifying – though the pressure was a little nerve-wracking! Since bringing Zombie Army Trilogy to the PS4 and Xbox One, the response has been overwhelmingly positive! There are still surprisingly few cooperative shooters available for console players and our game fits that need pretty neatly.

Q: How has the fan reaction been, as a whole, to the entire trilogy?

The fan reaction has been amazing and we know this because we don’t have some huge marketing budget to play with – it’s the players themselves  telling their friends, or buying their friends codes so they can play co-op together. All the Let’s Plays, the dedication we’ve seen uncovering all the Easter eggs in the game and even the fan art people have made is fantastic. It’s great that players love it as much as we do!

Q: There are many theories that suggest Nazis had had interaction with occult agencies, especially in popular culture. Were there any specific references or influences that were tapped during the making of ZAT?

This is obviously a rich vein of myth that nestles at the heart of the Zombie Army back story. The most overt reference in the game to Nazi occult connections actually references a historically documented event: the Schafer expedition to Tibet. This was officially an anthropological scientific expedition, but Schafer was forced to make it an SS expedition in order to appease Himmler – who was well known for his fascination for Asian mysticism. The Sagarmatha Relic in the game is suggested to be an artefact brought back from this expedition…

Q: Does the team have a favorite zombie film?

That’s a tricky one! There are so many great zombie films but for me, I think I always have to return Romero’s original movies: Night, Dawn and Day of the Dead.

Q: The score reminded me of the horror synth from John Carpenter films like The Thing, and Escape From New York. Was that an obvious choice, or was there much deliberation?

Very deliberate choice! The soundtracks of the movies from the 70s and 80s that inspired us are an integral part of the atmosphere. It was an exciting time as synthesizers were a very new phenomenon back then and composers were experimenting with them to create soundscapes the likes of which had never been heard before. When we first tried using the Carpenter-esque music alongside the gameplay of sniping our glowing-eyed Nazi zombies in the foggy world war 2 environments, it was clear to us that everything had fallen into place and the game became more than the sum of its parts. 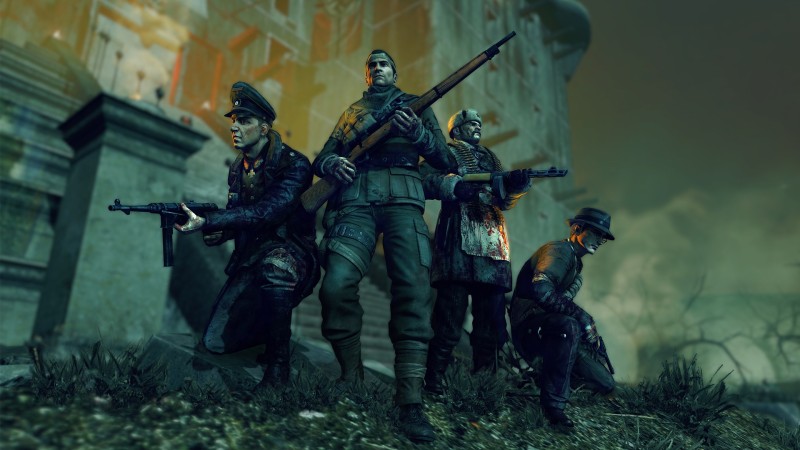 Q: Were there any specific games that were an inspiration for ZAT?

Not particularly to be honest… Naturally, we are fans of Left 4 Dead and Call of Duty Zombies. Also the Red Dead Redemption Undead Nightmare and State of Decay. But none of those deliver the exact combination of ingredients that felt right to us for Zombie Army Trilogy.

Q: What was the fan reaction to the inclusion of Left 4 Dead characters to the PC version of ZAT?

Valve have been fantastic to work with and when the idea first came up they were immediately up for it! Fans have been (predictably) very enthusiastic and we hope it’s introduced some Left 4 Dead players into our particular brand of Nazi Zombie shooting! Valve even allowed our friends at 2000AD [The famous British comic book publisher, also owned by Rebellion] to make a tie-in comic which you can get for free [http://www.zombiearmy.com/free-L4D-comic].

Q: Is there any chance of the L4D characters making the jump to PS4 and Xbox One?

The agreement with Valve was for PC only, and that’s obviously their focus right now. It’s not off the cards, but there’s no news at the moment.

It something we wrestled with to find the right balance but ultimately, we’ve let the zombies lead the way! The sniper rifle is naturally a great way to pick off slow moving zombies at long range, but as the horde moves inexorably closer, the player is forced to switch to more short-range weapons like machine guns, shotguns and pistols. I think it’s that constantly shifting dynamic that is a big part of the fun and challenge; every weapon has its place, and its up to the player to choose the right one under pressure. And of course the X-Ray kill cam on zombies is just delicious in a disgusting way!

Q: How much work needed to be done to remaster the original two campaigns to match the updated quality of the third entry?

Our engine and all our tech is all in-house, so many of the engine changes and graphical improvements made to the third “chapter” automatically passed to the older campaigns without us having to do any specific work – for example, better character models and animations, and adding full dismemberment for the zombies, and improved visual effects. However, we also took the opportunity to do bespoke work in quite a few areas to improve things that we hadn’t had the opportunity to do the first time around and to build on the things we’d learnt about what worked best in the game over the three episodes. 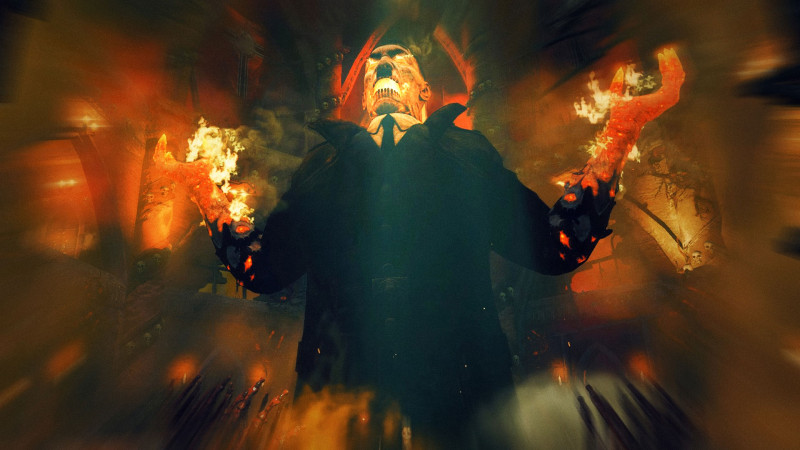 Q: With the third chapter in the series finished, do you think there is room for more Nazi zombies in the franchise?

I would like to think so! The fans are certainly clamouring for more! We’re very busy at the moment with two Battlezone titles and another unannounced game, so we’ll just have to see…

Q: Zombie Army Trilogy is Rebellion’s first self-published console title. What was the decision behind that? Given hindsight, would the team have gone the same route, or sought out an outside publisher?

It was an exciting opportunity for Rebellion venture into console self-publishing in way that had never been possible before. We’d developed the title without any involvement from an external publisher, proven it had a keen audience on PC, and with the digital distribution now being a viable option on console, it was an opportunity (and a learning experience) too good to pass up! I think it’s fair to say it’s been a runaway success so we wouldn’t change it for the world!

Q: Four female playable characters were added into ZAT, is this something the team will take into the next Sniper Elite game (if the another one were to be announced)?

Wherever possible or appropriate, absolutely! However don’t go expecting us to replace Karl Fairburne as the key hero in Sniper Elite in the immediate future!

Q: Are there any other secret crossovers the team is working on? Or, anything fans of the franchise should be looking forward to? (I’d be stupid not to ask, right?)

We have some genuinely exciting stuff in development at the moment that is going to have to stay under wraps for now – watch this space!

Zombie Army Trilogy is available now on Steam, and the respective digital distributors for PS4, and Xbox One. The game is also available at retail for both consoles.