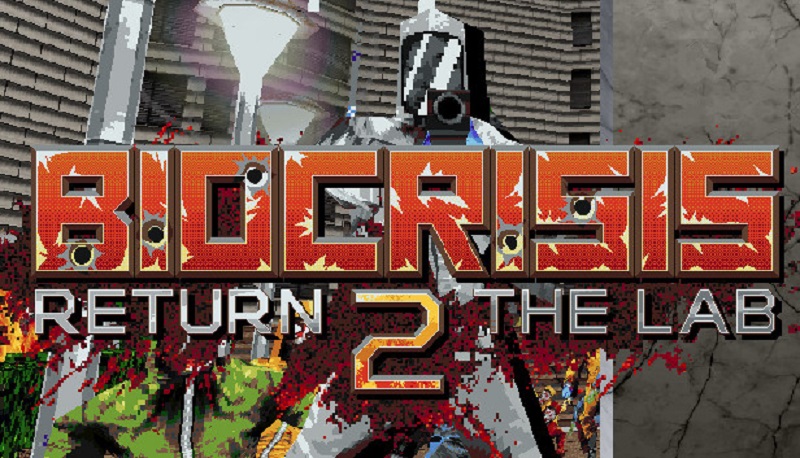 With all the recent excitement from news of The House of the Dead: Remake dropping soon, it’s got me pulling out my light gun setups and firing up the classics of the genre again (though, admittedly, I do this all the time anyway).

I’ve been a fan of the light gun games since the 1990s, and even though the classics still keep me entertained all these years later, I still try to keep up with any new releases, even though that can be disheartening at times. 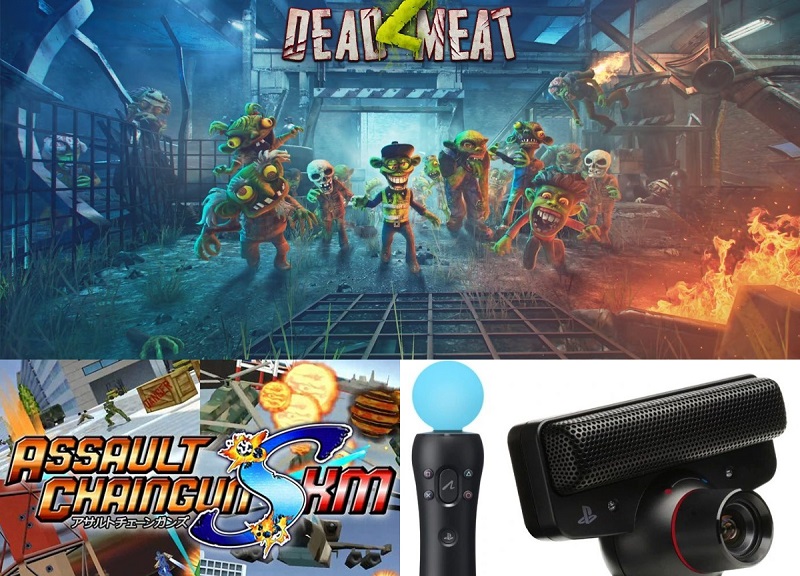 Outside of a few random Switch and PC titles (mostly shovelware), the light gun genre hasn’t gotten much love lately, which is understandable, since the technology required to play the games properly is fairly expensive or hard to obtain in 2022.

After the PlayStation 3’s PS Move compatibility spawned a glut of new home light gun titles in the late 2000s and early 2010s, that trend quickly died a fiery death when the PS4 launched in 2013. Hell, even the arcade light gun releases have been nearly dead for the last few years thanks to the global pandemic. On top of that, Sega completely closed its arcade division and all arcades they owned in Japan last year, as well as the Western arcade chain, GameWorks, closing all of their locations. 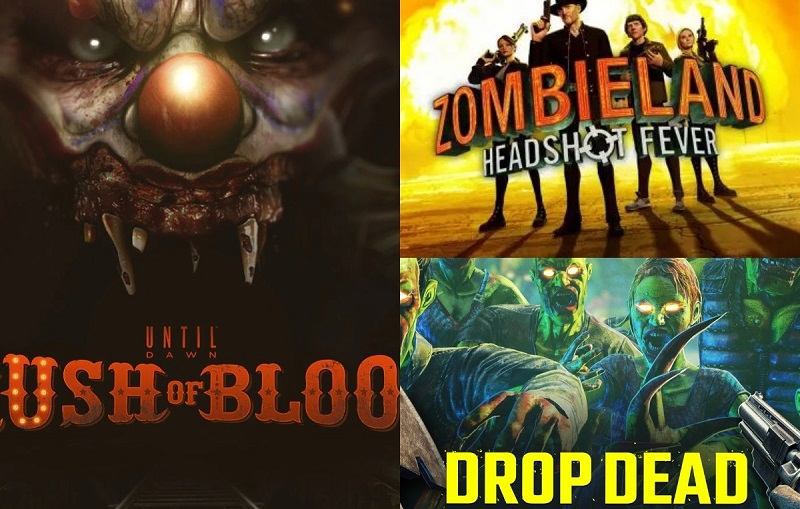 While there’s been a valiant effort to realize the type of rollercoaster-ride feeling of light gun games in the VR space, their success has been limited, even if there are some fun titles out there. Games like Until Dawn: Rush of Blood, Drop Dead, and Zombieland: Headshot Fever did a good job of nailing the feeling of a light gun game in VR, but the hardware required can similarly be a barrier of entry for those who want to enjoy these games. Good ones are few and far between amongst hundreds of boring and uninspired VR horde shooters.

Thankfully, every once in a while, a great new light gun title will hit the scene. That’s how we’ve ended up at BioCrisis 2: Return to the Lab, a new retro-inspired horror light gun game currently in development by an indie French developer simply known as Jim. I recently got a chance to play an early preview build of the game and talk with Jim about the project, and I’m loving how it’s shaping up so far. 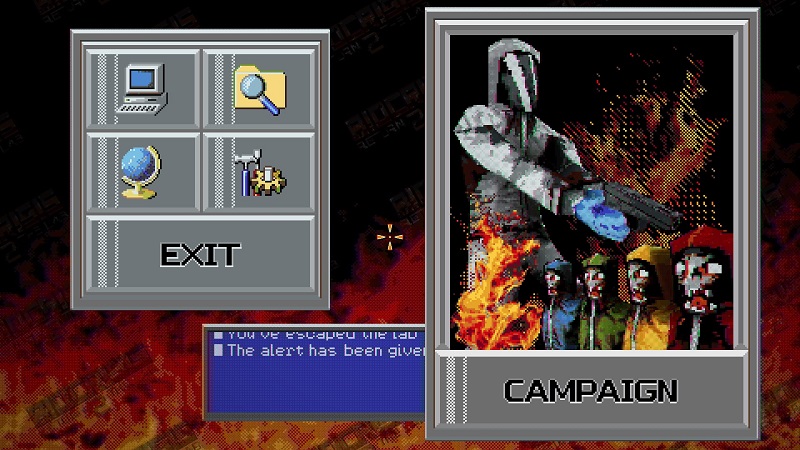 BioCrisis 2: Return to the Lab is a sequel to Jim’s 2020 title, BioCrisis, which played more like a 2D light gun shooter from the 16-bit era, with some arcade-style mechanics and a pretty simple but fun scoring system, and was set during a zombie outbreak at a scientific research lab. If you manage to complete a successful run in the first BioCrisis, it ends with a cutscene of you escaping the lab by jumping out the front door just as it closes.

BioCrisis 2 cleverly picks up right where the first one left off, with you jumping out of those doors as they close. The camera turns around to show you’re outside in the courtyard of the lab and there are plenty more threats headed your way. 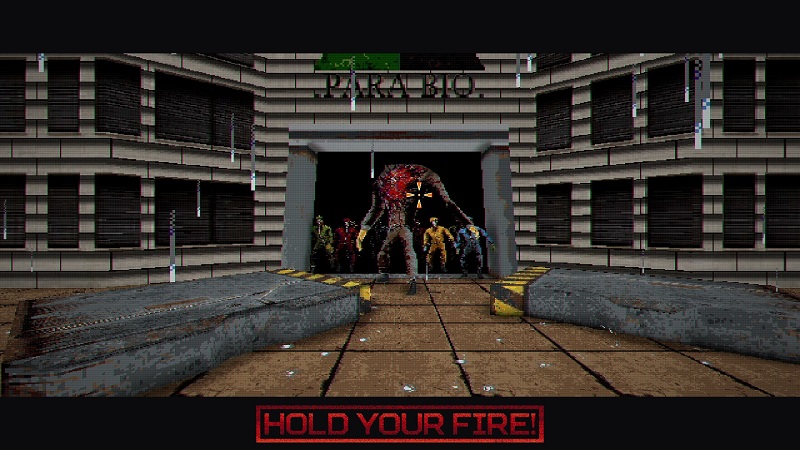 Soon after your escape, you find out the city will be nuked by the government to “contain the outbreak,” similar to Resident Evil 3, so the countdown begins to escape the city before the bomb is dropped.

This time, instead of keeping the 16-bit visual style, BioCrisis 2 dives head-first into the 32-bit 3D style, much like the original House of the Dead, Time Crisis, or Virtua Cop. The action starts right off the bat as you start fighting several zombies at once as you move through the courtyard. Headshots are deadly accurate, just like in House of the Dead, and zombies can easily overwhelm you if you don’t take them out quickly. 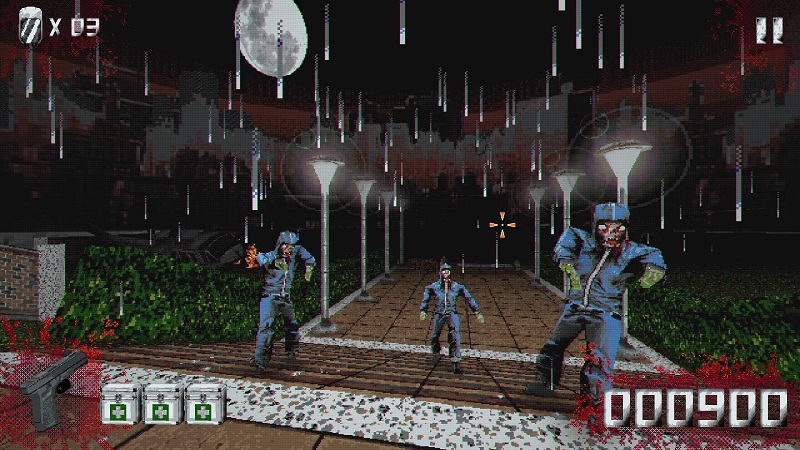 The shooting and enemy reactions feel great as you mow your way through hordes of the undead. The satisfaction from headshots is exactly what makes this kind of game great and BioCrisis 2 hits all the right beats.

You’ll soon start encountering birds and other types of zombies like throwing or spitting zombies, which adds variety and keeps the action going. You’ll also encounter branching paths, which adds to the replay value after you’ve finished the game. There are also several different types of weapons and power-ups as you go, giving some different strategies to approach each battle or section. 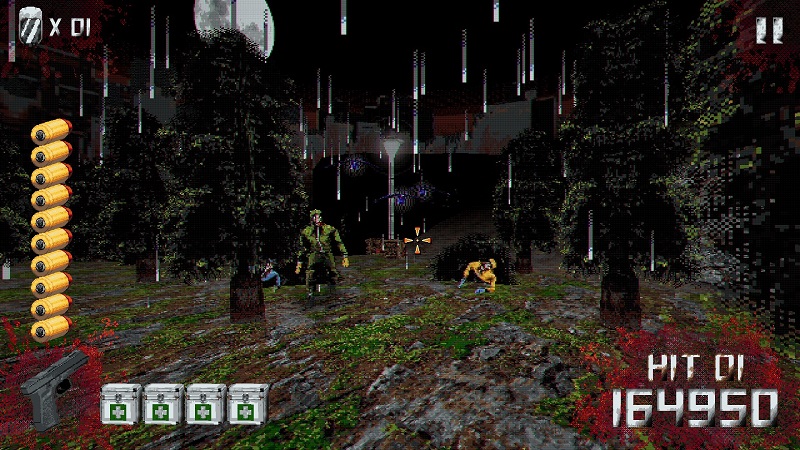 Near the end of the level, you’ll also encounter the big boss enemy, with its own patterns and strategies required to beat as you progress through the fight. The boss’s patterns are fairly simple in the early preview build, which leaves room for some more complex patterns and tactics once the rest of the levels are all fleshed out. 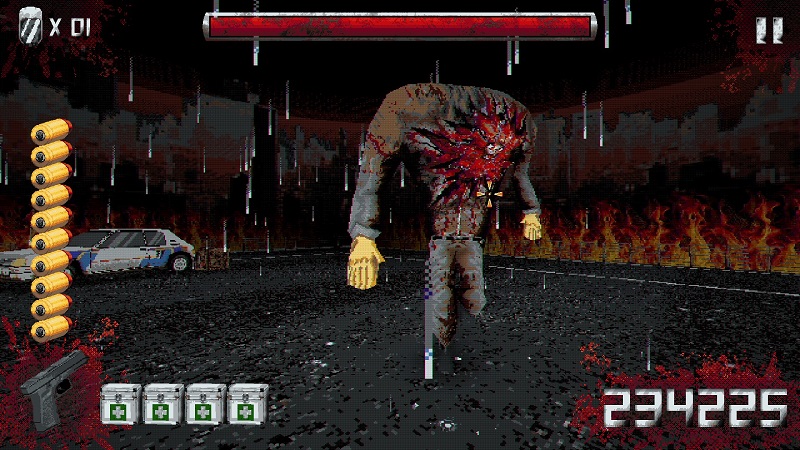 Dithering, texture warping, and everything else that comes with this type of low-poly, 32-bit 3D aesthetic is on full display here and does a great job taking you back to the glory days of the 3D light gun craze.

The game is compatible with the Sinden light gun and other PC light gun setups, even in this early preview build. This makes it that much more fun for those who have one of these setups since you’ll be able to experience it without much hassle once the full game is available to play.

There are currently no plans to bring the game to other platforms besides PC yet since it’s still so early in development, but this may become a reality later down the road. 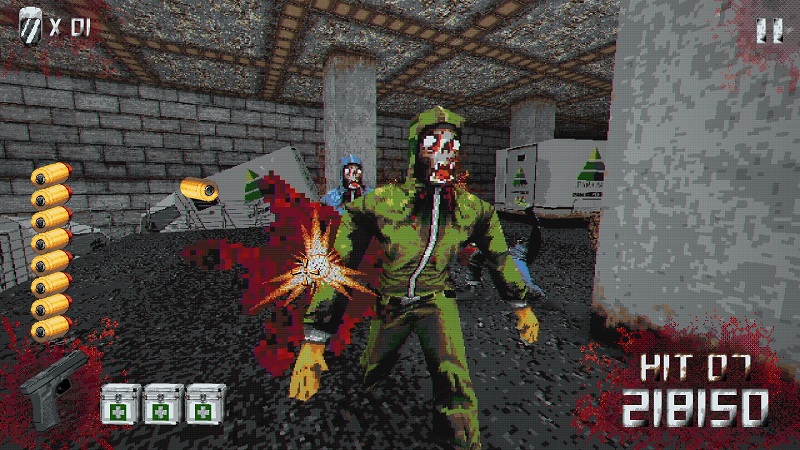 The game is set to feature eight full levels with branching paths, with each level being around 10 minutes, so a full playthrough will be close to the length of one of the classic horror movies the game is inspired by. Since this is all being made by a solo developer in his spare time, he’s set a realistic expectation to ship the game by early 2023, however, we’ll definitely have some more updates as time goes on.

Overall, this is an excellent callback to the light gun games of old while also giving us a dose of new content. If this short piece of the experience carries through into the full game, this will be one for the horror light gun fans to watch out for. You can already wishlist the game on Steam here and follow the developer at @Jmgennisson to keep up with the game’s progress.

As a bonus for checking out this post and the preview for BioCrisis 2, you can enter for a chance to win a free Steam key for Jim’s first light gun horror title, BioCrisis.

Fill out the form below and answer the question to enter, and remember, the contest ends on March 31st!