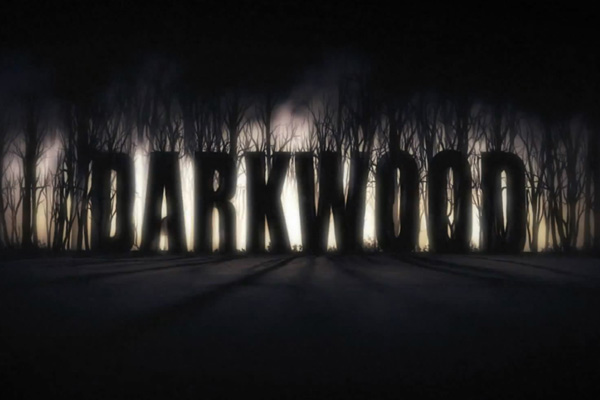 Darkwood released via Steam’s Early Access this past Thursday and after only a few hours with the game, I can say that, in my opinion, it’s shaping up to be an excellent survival horror game and a stand-out amongst the indie horror scene. With a focus on time and item management, excellent exploration, and a slow-pace that creates amazing tension with completely unscripted boo-scares, I am in full support of this horror title. I write this post to express my full thoughts on the first  hours and in the hopes that more people will grow to support it through its year of early accessibility.

A prologue to introduce new players is optional at the start. It’s highly recommended, as this is a game where the basics of survival are in fact the only things that will keep you alive; winging dangerous expeditions and reckless use of supplies means instant death. A nice yet vague set-up and some surprises await within the prologue, so I won’t spoil it. Once the real game begins, our protagonist awakens to a voice, “Rise and shine.” Say hello to one of your few friends in the dark woods, Wolf. He offers sound advice: don’t travel after dark. Wolf will sell you goods in exchange for weapons, ammunition, and juicy information.

From there, you leave your hide-out and weave between the trees to explore the deep, dark unknown. Your field of view is angular and somewhat peripheral. Shadows are dark and merciless. Trees, rocks, and other obstructions keep you constantly turning; unless something is within your vision, it’s completely invisible. It’s entirely possible enemies will be right around the corner of a tree, which means the top-down perspective doesn’t provide any advantages. Miscellaneous crates, piles of logs, broken down vehicles, and corpses provide you with the necessities for survival: wooden boards, nails, rags, matchsticks. With the various junk you come across, you can craft melee weapons, molotov cocktails, lock-picks, and healing items to brace the night and its terrors. 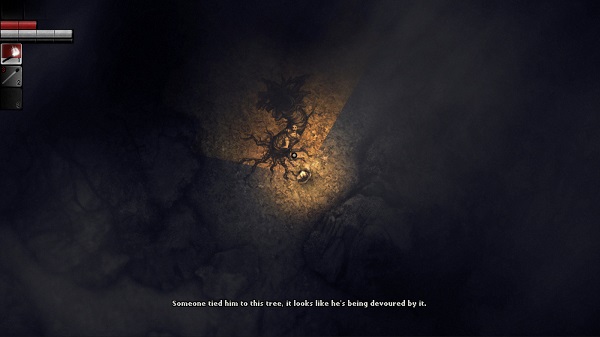 A dog-tag lies within your inventory at the start. Showing it to Wolf, he mentions that you can learn more about it from the lady that stinks of chickens, and then he points you along the proper path. Navigating the woods is difficult at first and demands constant attention. Unlike most horror games, the map in Darkwood has no cursor to pin-point your location. At first, I hated it, but now, I love it. It ensures you’re trying to search for places, and you have to constantly know which landmarks are where so that you can always know if you’re in familiar ground or not. Savage beast-men and wild animals are your standard threats during the day. A single encounter can be deadly, even with a powerful axe or single-shot pistol. I learned too late that avoiding enemies is the way to play.

You only have about ten minutes of daylight with each dawn, and it must be spent wisely. Come night, the growls and howls of creatures of all sorts surround your home. I can rarely recall a moment in any other horror game that brought about fear as much as in Darkwood, where I’ve spent five startling minutes in one spot with my axe at the ready, knowing that at any second one of my barricades would begin to fall or the creak of my wardrobe hiding the hole in the wall would pierce my ears. Eventually I had to begin planning my days.

Did I have enough time to run to Wolf and trade with him? Should I explore the cottage I found on my way back to my hide-out? Management is everything in Darkwood—learn to never over-jump your bounds. 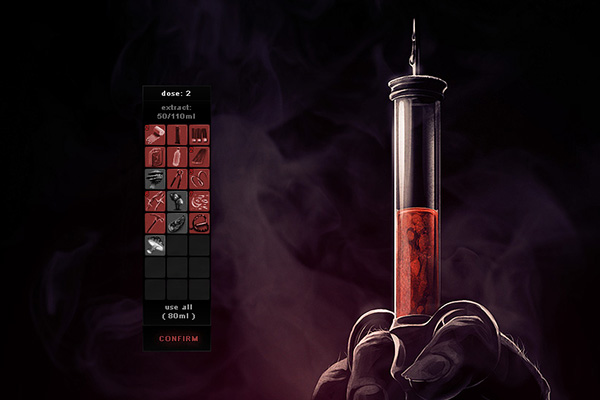 Among the scavenged loot on your day-to-day adventures will be mushrooms and various animal meat. These ingredients can be cooked together at the stove in your hide-out to create doses of power-ups that fall within tiers. They start off with small abilities such as extra item capacity or choosing to have animals be less aggressive towards you (go with that one, seriously good stuff!). With every three new powers you obtain, a hallucination will occur. The game transitions to a new scene, all of your items are gone, and you’re on a linear path, but some excellent scares and strange story details lay within them. I’ve only experienced two of these so far, and they’ve yet to tell me much, but they are intriguing enough that I want to keep exploring them. On the plus side, your item durability and flashlight capacity are mysteriously restored after each dream.

The rush of finding a new location on your map brings both the excitement of discovery and fear of the unknown. One of the structures I came across was a pig-farm. It was a large square area with three buildings: a home and two pens. Buildings can be entered from any door or window that isn’t barricaded or locked, so finding a good way in and a back-up exit before entering places is a solid idea. Going through the house, I found a light-switch with an electricity symbol on the bottom. Flipping it down did nothing. Searching the outside of the home further revealed a generator that provideed the small table lamps within with power. Scavenging goods along the way, a man in one room  yelled at me to ‘keep the fuck away’. Stepping too close set him off and he attacked. In my play-through, I had to kill him to survive, and I still question if he was important to the story in some way.

Going further across the farm, I noticed one of the large pens was completely barred off except for a locked door. After having crafted a lock-pick the next day, I returned to find a very dark and strange place. New, dirty-looking pigs scavenge the dark structure. I had to peer into each and every stall I could find as the excellent shadows bounced around the room, while keeping an eye on the battery levels of my light.

Numerous rags and mushrooms were within the structure, and I was grateful for the harvest, but I couldn’t shake the feeling that I shouldn’t have been there… almost as if I was stealing. The deeper I got, the more unsettled I became because of the sudden ambient changes and absolute lack of natural light. A line of pig corpses lead to a horrifying discovery that I could barely uncover with the tail end of my flashlight. Something large was moving at the back of the building. As I approached, I saw –

Yeah right, you’ll have to play the game to figure it out! It’s too good to spoil! 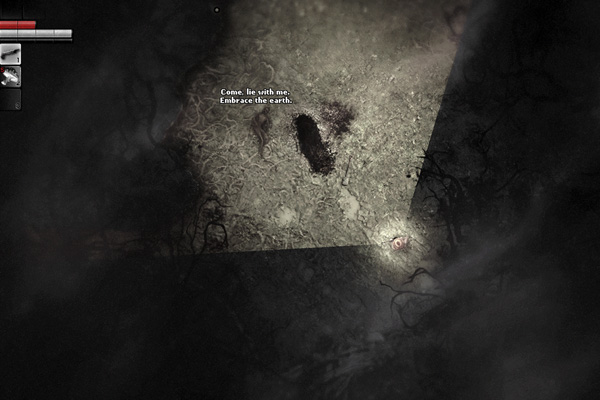 I’m currently twenty-five days into the game on my fourth or fifth world (turn permadeath off at the beginning; not fun for beginners) and am still finding things, even in places that I previously thought I had cleaned out. Most NPCs are tied into quests. Even though they are the run of the mill gathering, fetch, and delivery fairs of common RPG games, none of them are that easy. I actually haven’t completed a single one after hours. There is a darker layer of forest on the map that I have only barely explored. Wolf is very much telling the truth when he says few have lived to tell their tales after entering the thicker trees.

In what has nearly become a mediocre genre, Darkwood is a shining gem in the survival-horror arena. It doesn’t resort to defenseless hide ‘n seek gameplay like a lot of indie horror games, but it doesn’t empower you like every triple A one, either. With each new playthrough started, the world changes. Wolf’s camp is never in the same place, and that goes for every other structure, resource pile, and mushroom bunches. The world you play in becomes your own and starting a new game can be totally different depending on the lay-out of landmarks. What’s even more remarkable is that in this early preview of the game – only the first chapter is available. I’ve yet to crack that after twenty five in-game days and four nights of playing it!

However, being an early access game, Darkwood does have its share of glitches. I have had entire houses disappear while I explored them, my spare explosives would fall from my hands and kill me, and sometimes not even a lone monster would attempt to breach the walls of my hide-out and murder me for considerable amounts of time (not sure if that’s a glitch yet; they really don’t like the light!). Despite these flaws, this is still a game that I hope all fans of horror dive into. The developers deserve our feedback so that this game can be crafted into an even more beautiful yet traumatic experience. It’s easily my favorite horror game of the year up to this point.

Darkwood is available on Steam for $13.49 until the end of the month and $14.99 after that for PC, with Mac and Linux versions in the works.