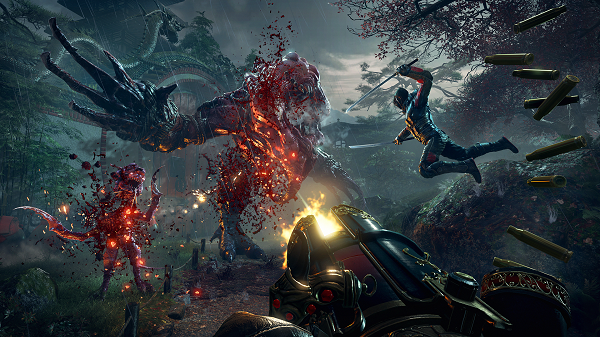 Another year, another chance to escape the crowds of people and excessively loud booths at E3. Situated across from the convention center and in a Hooters Parking lot was publisher, Devolver Digital, once again forgoing the event in an official capacity and just chillin’ outside of it. They’re too cool for lines, VIP passes, and large LCD monitors with trailers on repeat. Once getting past their sign-in table, I was greeted with the opportunity for some BBQ and free beer. Seeing as how I had 30 minutes to kill until my Shadow Warrior 2 appointment and didn’t want to spoil my planned dinner later that evening, I partook in the latter offering.

A reboot of the not-so-politically correct Shadow Warrior released in 2013 on PC, and I quite enjoyed my time with it. Filled with silly dick puns at the expense of the protagonist Lo Wang, and home to lots of gory sword fights, it was a game that I’d recommend wholly. And now there’s a sequel coming out, which makes me pretty happy. 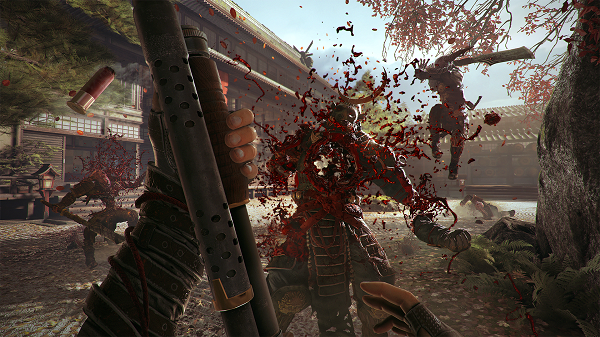 Once the clock reached my appointment time, I went into the assigned trailer(air conditioned and all, with an unkempt bed in the back and snacks on the sink), furnished with a couch and large TV. There myself and another games media person were greeted by two individuals from Flying Wild Hog. Unfortunately I didn’t get their names. After a quick rundown of the first game, One of the developers turned to the TV screen and started the demo–but not before he apologized for pausing it to invert the Y-axis. His colleague laughed at him for his gaming taboo, but I declared that I too bore the cross of needing inverted camera controls. We highfived. We’re a special breed, one that fights the up-is-up, down-is-down establishment.

Once the demo actually kicked off (this was hands-off), I was immediately impressed by the visual bump that Shadow Warrior 2 has over its predecessor. Environmental lighting has been greatly improved, with god rays trickling through the trees and bathing the Japanese architecture – homes, gardens and paved pathways with quaint creeks. Soon we were shown Wang’s verticality as he made his way into a structure in order to drop down and stealth kill an enemy clad in Shogun armor, a feature new to the series. The stealthy approach was quickly thrown out the window once the enemy exploded into bloody bits, and Wang asked “who wants a little Wang”, but who cares? Shadow Warrior showed with its first game that it’s loud and ridiculous and this one seems no different. With several swipes of the sword and a few magical abilities thrown into the mix, the first batch of demons were defeated. 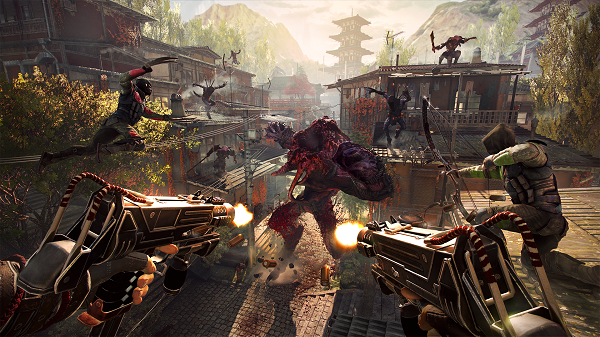 One of my bigger gripes with the first game was the way magic was used. Using the directional keys or analogue stick, magic was directly linked to your movement, negatively affecting the ability to navigate while casting. I asked about this and was told that magic was mapped to buttons now instead. Great!

The second Flying Wild Hog then jumped into the game and began helping with the slaughter. It was around this time that the two showed off just how large Shadow Warrior 2’s environments are, with open ended paths and much more freedom given to the player. Shadow Warrior 2 is definitely larger in scope, and it wasn’t a direction I expected for the sequel, but watching it in action made me question how the first game got away with more-linear level design to begin with. After extended play, it could get a little monotonous with all the slashing and shooting. With larger environments and player-chosen paths, in addition to co-op, I wonder if Shadow Warrior 2 will avoid that. 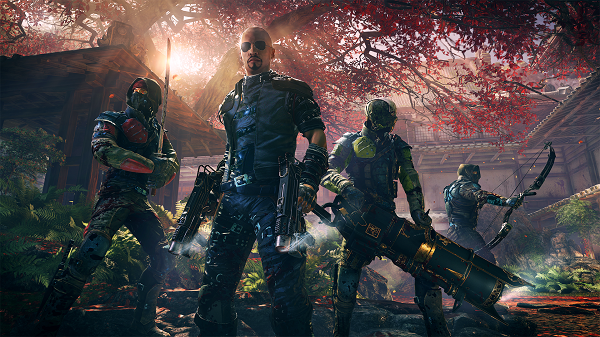 In addition to larger environments in which up to four players can cooperatively complete quests and slay demons in, we were informed that environments were procedurally generated, but not in the traditional sense. Flying Wild Hog designed Shadow Warrior 2’s environments piece by piece within a grid. Each section of the map was designed by hand to ensure quality but also diversity; upon loading, the environment is stitched together using many different pre-made sections, creating a unique layout that avoids the asset reuse and repetition found in procedurally generated levels. How many environments we’ll see in Shadow Warrior 2 is unknown, but I hope a lot for the sake of variety and replay value.

Shadow Warrior 2 is fast, violent, and far better-looking than I could have imaged – in both visual fidelity and scope. With four player co-op allowing for multiple missions to be tackled alone or together and more environmental freedom, I came away very impressed. I remarked to the two Flying Wild Hog devs that Shadow Warrior 2 definitely impressed me more than another twitchy shooter unveiled during E3 week: DOOM. Both seem very humbled by that, and that added a touching little end-note to a fun demonstration.

If Shadow Warrior 2, in all of its audaciousness, can keep players coming back without feeling fatigue, I think it will be a nice slice of entertainment.