The Top 4 Halloween-iest Games Ever 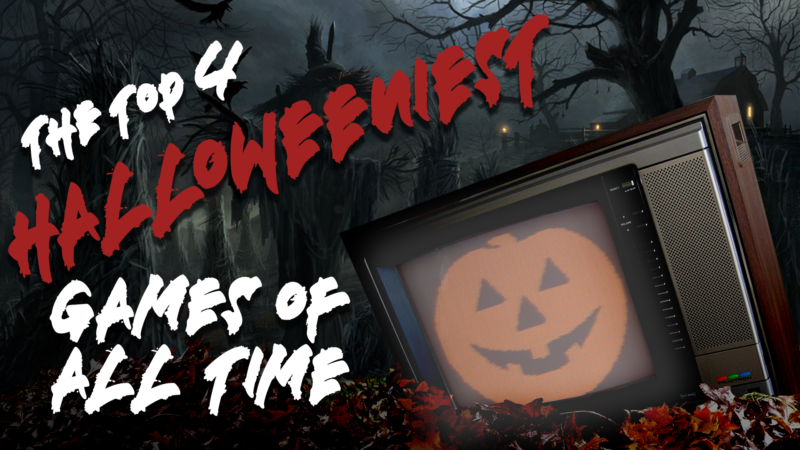 Following Halloween, we will be celebrating Rely on Horror’s 10th Anniversary, and I wanted to take
a moment to thank each and every one of you for reading and sticking with us throughout the
years. I joined on in 2011 as an artist doing a fan comic, and now it’s become something of a
dream job, allowing me the chance to meet creators and performers I couldn’t have imagined
I’d have the chance to. I rely on Rely on Horror, and Rely on Horror relies on you.

Thank you for reading, and here’s to another 10 years!

Ah, October. The trees changing. The electricity in the air and the chill of late afternoons. The cute and charming decorations and the dark and disturbing ones, springing up door to door down your neighborhood. The stink of latex on your hands after rifling through this year’s selection of masks. There really isn’t a time of year that I feel more comfortable in, from the moment autumn kicks in to the moment the Spirit stores close on November 2nd. Halloween is probably a special time of year for horror fans in general when the whole of the world caters to us and our love of a good spook. This year at Rely on Horror we’ll be suggesting some of our favorite, most ‘Halloweeny’ games for the season.

Now, before we begin I’d like to clarify the rules this year: 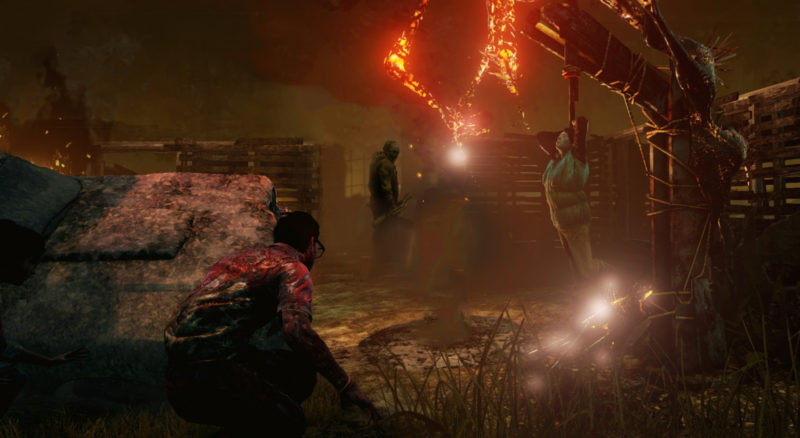 While I’ll honestly be the first one to pipe up in regards to its variety (it really, really needs more than one mode), there really isn’t a better multiplayer game to represent Halloween than Dead by Daylight. From its fun and spooky tone to the incredible cast of licensed killers, Dead by Daylight has it all. Almost like a Halloween movie night with friends, Dead by Daylight offers a dive into the thrill of being chased by- or even becoming- some of our favorite Halloween classics. Micheal Myers, Freddy Krueger, Ghost Face, and of course — if it’s Halloween, it must be Saw. About the only one missing at this point is uh… sigh. Pretty much all of them are the only modern video games you can find of them as well. It’s more than just it’s cast of killers though; it also has an atmosphere that really isn’t captured elsewhere in the gaming spectrum.

As an example, the game’s maps (called Realms) each have their own tone and style, and no other realm in the game quite gets my Halloweeny heart aflutter like Coldwind Farm. Perhaps it’s simply the orange haze to the world or the feeling of being in a Halloween Cornfield Maze (although I think this is all wheat but quiet you, I’m waxing nostalgic over here). The slaughterhouse feels like something straight out of a Universal Horror Nights attraction, and of course the pièce de résistance, the uh… pig tree. Look at this god damn thing. 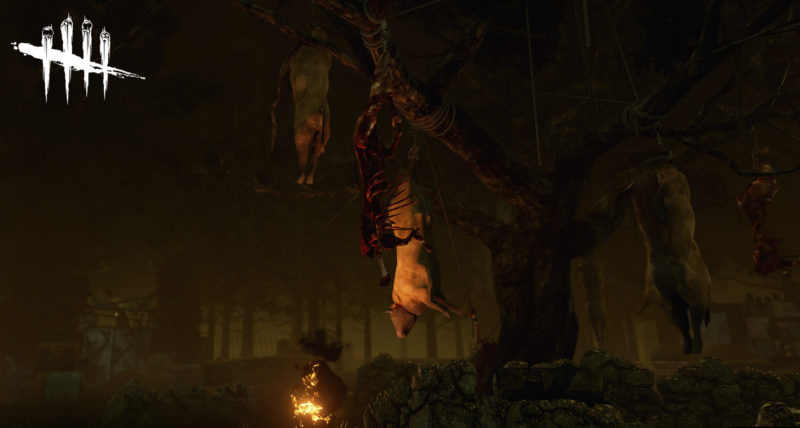 Something about the fact that they’re pigs and not people makes it… I dunno, more disturbing to me. It invokes a sense of violence that’s being held back by only having pigs to practice on… but now there’s fresh meat in the Hillbilly’s grasp. I love being in this place, the colors and atmosphere just feel so… comfy to me. Of course, I also love hearing chainsaws revving off in the distance — quickly followed by the cry of one of my fellow survivors . Overall, there’s no better multiplayer horror experience out there if you’re looking for something to light your Jack-O-Lantern’s candle. Gather up some friends, pop a few beers, and settle in for a delightfully wicked evening. 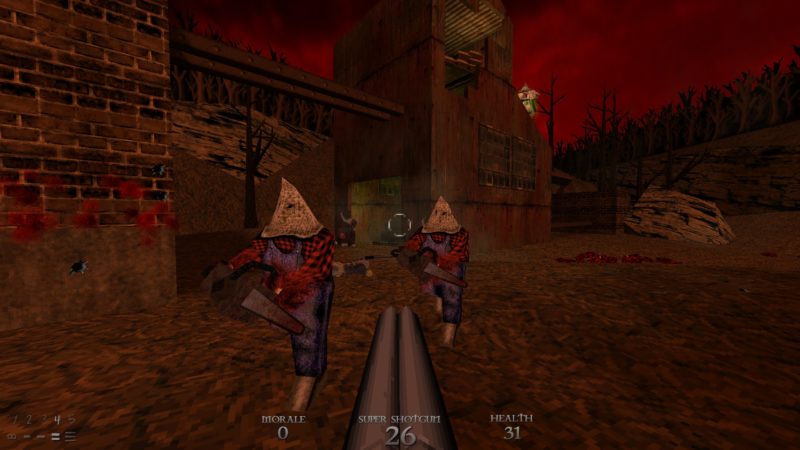 Speaking of the horrors that lie in wait beyond the pasture, DUSK. I only just discovered this game (it wasn’t part of the original list, sorry Outlast) and I instantly fell in love with the ‘grinding of metal gears on shredded flesh’ vibe it soaks itself in. From the word “go”, the twisted countryside of DUSK drips in a kind of fun Halloween attraction at the local theme park gore I love to itty bitty gibs. Inspired by a mix of classic PC shooters like DOOM and Quake, DUSK delivers on a delicious and vibrant 90s horror action unlike anything else on the market. From the instant you start you’re plunged into the depths of a hillbilly nightmare as chainsaw-wielding sack-faced maniacs and dark wizards of some devilish creed descend on you like locusts — and that’s not even close to all this game has to offer. What I really love, however, is the style with which it’s presented. The color palette is wonderful, to begin with (of course you can completely customize it as you see fit), but the PS1 era visuals allow the unsettling designs to really sing. While it’s easy to praise the accomplishments of extremely high-fidelity visuals that look almost real, the feelings that having to work to understand exactly what you’re looking at is a style unto itself. I’m sure DUSK would look fantastic regardless of graphic style choice, but the retro aesthetic lends it an otherworldly quality that goes beyond simple nostalgia. I mean, what in the everliving fuck even is this. 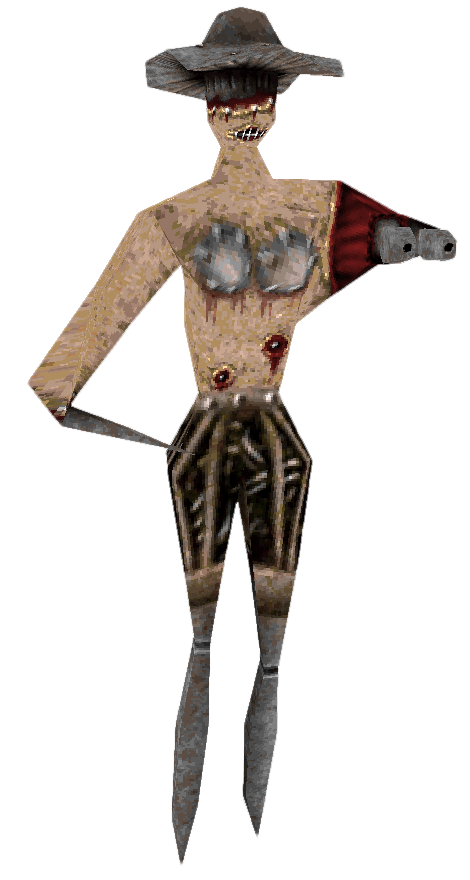 I don’t want to see this with more detail, because I feel like it would probably ruin the magic of it, and as it is here it’s horrifying to me. If you’re looking to experience something that elicits that classic era of horror shooters, and you want to rip and tear into something completely fresh, look no further than DUSK. Seriously, I feel like kicking myself for waiting so long on this one. Badass and bloodthirsty, genuinely disturbing and haunting in places, and overall just so bloody… good, DUSK is like acting out the lawnmower scene from Brain Dead in a Spirit Halloween. 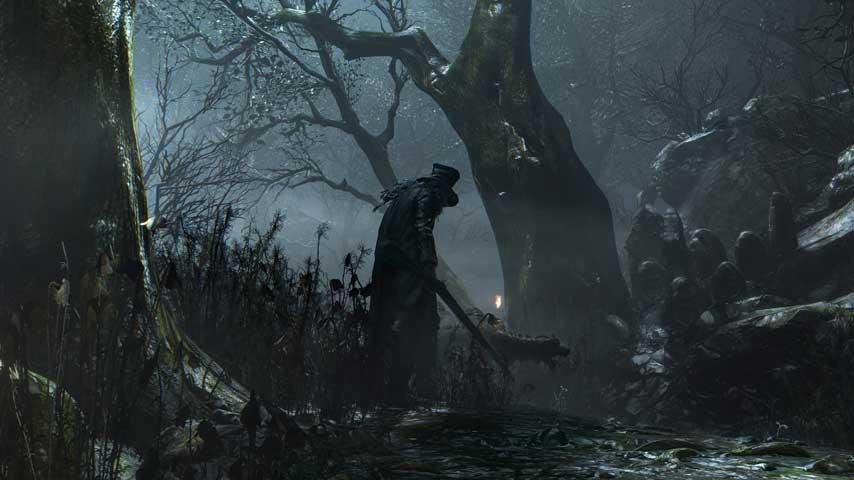 Bombastic, heavy metal horror sprayed down with a heavy helping of blood is very much my kind of jam with Halloween for sure… but there’s another kind that I love deep down in my core. A lot of horror sells itself on simply being a roller-coaster ride of terror, but the other option is one that just wants you to be enveloped in its atmosphere. This is how I perceive Bloodborne, a lonely and ambient journey through a haunted realm known only to the dead and the diseased. While there are plenty of things that will probably scare the pants right off you in Bloodborne, it’s the quiet stillness as you wander through much of Yharnam and its surrounding areas that truly encapsulates the game experience. The empty sadness that floods this world overtaken by darkness and mad knowledge creates a listless rhythm to your exploration.

Architecture and beauty surround you, but it does not feel born of a world brimming with life, but rather that of one resigned to the omnipresent encroach of death. I don’t know another way to put it, really. Despite the insane and deformed horrors that lurk around every corner, what really gets me about Bloodborne is how very, very sad it all is. A victorian tragedy wrapped in disease and distance, the lack of any actual human interaction only deepens this feeling of detached loneliness. Sure, you can talk to a few people through glass and doors, and on occasion you can find some lonely soul you can offer safe haven to, the majority of the game keeps you at an arm’s length. Dark Souls does something similar, but it’s nowhere near how gated off from the denizens of Yharnam Bloodborne makes you feel. You don’t really ever get to feel like you’re saving these people, only that you’re trying to comfort them while they die. You are not a cure, you are a pallbearer.

Shadows of the Damned 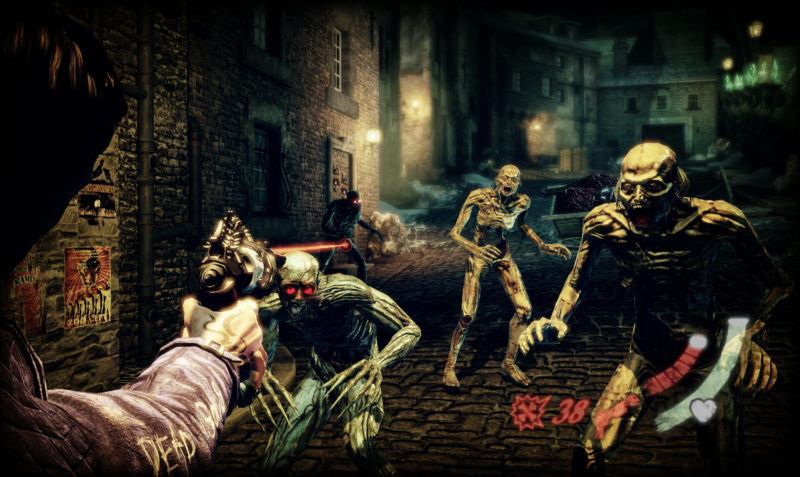 Now that I’ve gotten the chance to wax poetic about the artful craft that went into the making of one of my favorite horror games, let’s throw all of that out the window for the ultimate (in my opinion) Halloween game of all time. Scary. Loud. Sexy. Funny. Bloody. It’s all here baby, so unzip and get out your Johnson, it’s time for our very own road movie. Shadows of the Damned represents everything I love about the Halloween season and more, a shower of blood that pays tribute to the core of the season’s fun. From overt shout-outs to films like Evil Dead 2 and a style that mixes the minds behind Resident Evil, Killer 7, and Silent Hill into a delicious blood-pie, I’d be amazed if there wasn’t at least something that would bring a smile to every horror gamers face. The ability to be actually funny, somewhat erotic in places, and creepy all at once is an impressive feat, and Shadows of the Damned handles it with aplomb. I adore the color palette and the grotesque design to creatures and the world, all undercut by Garcia Fucking Hotspur and Johnson taking the piss out of all of it, which is then also undercut by moments of genuinely creepy and disturbing displays of horror creativity. To top it all off, Akira Yamaoka layers the whole experience in his trademark tunes (in some cases maybe a little too trademark but I’ll forgive him because it’s really damn good) that cinch the whole thing together like tightened stitch-work.

There’s nothing else out there quite like Shadows of the Damned, which is a huge shame since it appears to be trapped forever on last-gen hardware. The only modern way to play it now is on Xbox’s backward compatibility program, and odds seem to be against it ever seeing the light of day again thanks to EA’s policy of not re-releasing older games. If you get the chance though, Shadows of the Damned is far and away the most Halloween-y experience I’ve ever had the delight of playing, and it’s an experience I return to every year to soak in.

That’s all for this year, but what are some of your favorite Halloween-time games? What do you consider to be the ultimate Halloween gaming adventure, and why? We’d love to hear your thoughts! In the meantime, I should suit up and get ready to give out candy — life’s no fun without a good scare, right?