reHorror: Sins of the Father 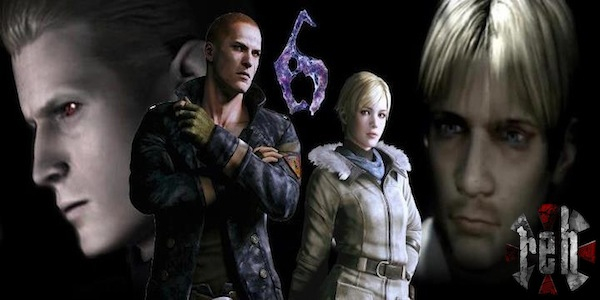 Albert Wesker is currently swimming in the fiery waters of a blue-shaded hell, but at least he doesn’t have to worry about any rockets hitting him in the face…

Whether you love the game or hate it, Resident Evil 5 sealed the fate of one of the series’– and gaming’s– most beloved characters. Now the series is left with a hole for another antagonist to fill. Sadly, it’s going to be quite hard to fill Wesker’s black boots.

Alex Wesker’s name was dropped in Resident Evil 5’s Lost in Nightmares DLC, and since then, fans have been awaiting his big, proper reveal (presumably as the next main villain). That may not happen for a while. However, looking ahead at Resident Evil 6, we do have one character that might pose a Wesker-sized threat (albeit a temporary one). And, hell, while we may not have Alex, we do have Wesker’s son.

Derek Simmons will be Resident Evil 6’s main baddie, and I’m sure we’ll fight a mutated version of him at the end of Leon’s campaign. But just like Norman in Revelations, I believe that’ll be it…We need an important character to take up Wesker’s mantle as a recurring villain for the series’ future. And I’m going to say it’ll be one of the main playable characters in the game, specifically either Jake or Sherry. So… who will it be? 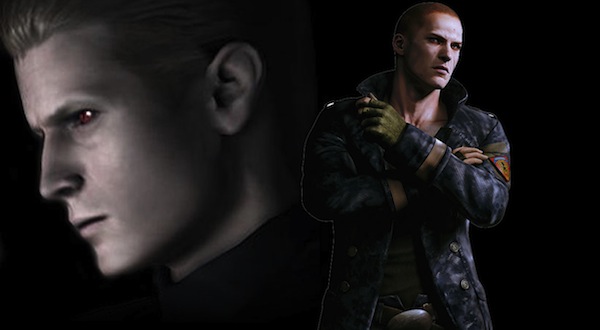 Let’s start off by looking at Jake and the possibility of him ending up being the series’ new baddie. He’s the most obvious choice out of the two, being Wesker’s son and all. But will Capcom actually go the obvious route and make the son of the series’ previous antagonist the new prominent baddie? And what could possibly push Jake to the dark side?

Jake has a special blood type, thanks to who his daddy is, and this grants him not only a special immunity to the C-Virus, but also super-human powers (again, like his daddy). His gameplay reflects said powers, allowing players to utilize his close-quarters combat prowess to complement the standard Resident Evil gunplay we’ve become accustomed to. But with that gift comes a curse.

“Does he know that Wesker was my father?” Jake asks Sherry in the game’s E3 trailer, referring to Chris. At some point in the game, Jake will learn a lot about his father and all the nice things he had planned for the world. In the beginning, he’ll be quite confused, as we saw when he first runs into “Ada” after being chased by the Ustanak in the game’s Captivate trailer. He seems clueless after she tells him Wesker is his father. That will change as his scenario runs its course. 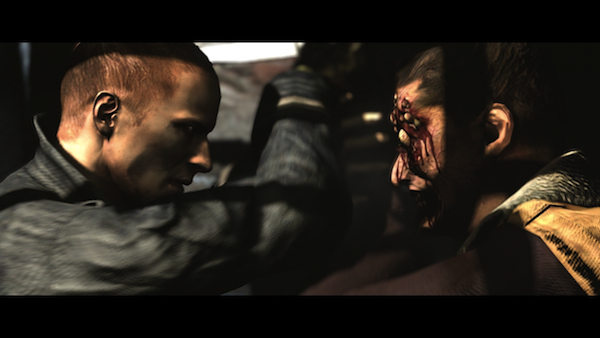 It’ll be interesting to see what happens once Jake does learn more about the man who penetrated his mom. He has a stronger bond with his mother, who he supports by carrying out mercenary work for money, so learning about his evil deceased father, that left his mom with no other option but to take on both a mother and father role on her lonesome, may not have that big of an impact. I really don’t see Jake looking to get revenge for the death of his father, nor do I see him opting to continue what his father started. That classic “like father, like son” saying won’t be applying to Wesker and Jake, in my opinion.

Don’t get me wrong, I think it would be quite awesome to see Jake put on a black trench coat and don those iconic shades after the credits roll. It would be an awesome and orgasmic set-up for the future of the series, showing him sitting down looking all bad-ass as he looks up at a giant computer screen, planning his next move. Perhaps a loved one, his mom maybe, will be a victim of bio-terror, leaving Jake angry at the world, looking to mold it to his liking (a la Wesker, to a certain extent). Think Gabriel’s journey in Lords of Shadow, and him ending up becoming the villain in the epilogue scene (minus becoming Dracula, of course). It’s like Harvey Dent said in The Dark Knight: “You either die a hero, or you live long enough to see yourself become the villain.” It would be insanely awesome to see Jake follow in the footsteps of his father, but I just don’t see it happening.

Instead, I definitely see Jake becoming a prominent hero in the series, with him deciding to use his powers for good as opposed to going down the path his father went. There’s a lot of potential for his character going forth, post-Resident Evil 6, unless Capcom decides to REboot the series. And his immunity, if it applies itself to other future viruses, could be the perfect explanation for why we won’t get infected when bit by zombies in the games, as long as he’s the main character, of course. So, yeah, I think Jake will be a new hero that’s here to stay, and one that’s sure to become a beloved icon in the series as time goes on. Sherry on the other hand… 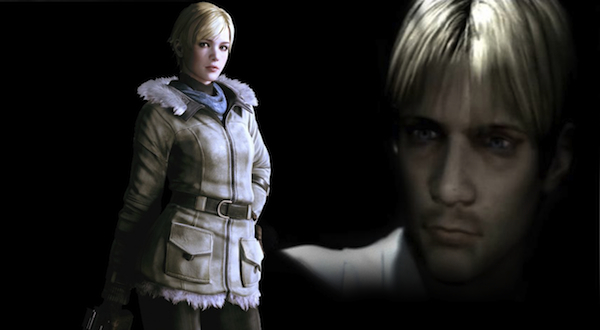 After many years of speculation (tube girl!) Sherry is finally, FINALLY, back. It’s been way too long. She’s such a cutie now…Remember how some of us thought she was Ashley back in the game’s reveal trailer? I was guilty of that, too. But hey, Sherry’s back, and I think Capcom didn’t just bring her back to fulfill the dreams of hordes of fans. No, no, no. I believe there’s way more to Ms. Birkin’s big return. Way more.

Being the daughter of two Umbrella researchers isn’t easy. William Birkin and his wife, Annette, were always too busy caught up with their work, leaving barely any time to do actual…you know…parenting. Sherry basically grew up on her lonesome, and it wasn’t until she ran into Claire during the Raccoon City outbreak that she at long last felt a sense of love and care. She got to keep Claire’s awesome vest, too, so that’s a plus! This weak upbringing isn’t the only reason why Sherry could go bad, but we also have to take her father’s horrible fate into consideration.

William wasn’t exactly an evil mastermind like Wesker was, he was just a very dedicated researcher that ended up becoming a product of his very own research. He was instrumental in the development of the G-Virus, being the one behind the new virus’s discovery. This then was the catalyst for the Raccoon City outbreak, which happened after Umbrella sent the USS Alpha team to relieve Dr. Birkin of his life’s work. He obviously refused to give up the G-Virus, intending to hand it to the government, and thus he was shot up like a fool in the wrong hood, but he injected himself with a G-Virus sample he still had in his dying breath. The rest is history. 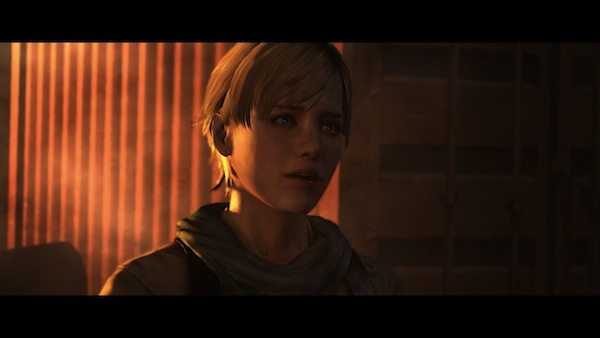 With her mom dead and her daddy going boom at the end of Resident Evil 2, Sherry was again on her own. She was taken by the government, pushing Leon to work for them to ensure her safety. All the while Wesker was monitoring her, as she still had traces of the G-Virus in her after her father implanted a G-embryo in her (how lovely). After years of being under tight watch, Sherry became a government agent like Leon. In Resident Evil 6, her main mission is to protect Jake, who’s being sought after for his special blood type. The two will definitely form a very significant bond with each other, making Sherry’s potential transition to a baddie an even harder pill for Jake to swallow.

Sherry has been basically stripped from a normal life ever since she was small. And things only got harder the older she got, always being watched, not being allowed to have a normal future to look forward to. I consider all this fuel to her potential, as they say in professional wrestling, “heel turn.” She may end up serving the ever so mysterious Organization along with Ada and quite possibly Jessica (but that’s a story for another day!). Or, hell, she may end up having her own group altogether, looking to bring back the G-Virus project. And speaking of Jessica, I think we’ll be seeing a similar act of betrayal here. Maybe not exactly the same (no shooting!), but I think it’ll be revealed that Sherry was protecting Jake for her own reasons. And maybe she’ll escape with some of Jake’s blood at the end of their scenario, with her last words to him being “see you around,” which is also the name of their scenario’s final achievement/trophy.

I know you may think I’m crazy for even writing Sherry and “villain” in the same sentence, but I truly believe she may end up carrying the main baddie role for the series’ foreseeable future. (Until she ends showering in lava and getting shot in the face with a missile, of course.) We already have an anti-hero in Ada, a potential villain in Jessica, and a pair of beloved heroines in the series in Jill and Claire, so making Sherry the main antagonist would be quite nice to see, adding more power to the females in the franchise, albeit sad considering her importance and ties to Leon and Cliare (if she’s still alive that is!). Imagine how personal a sequel starring Claire would be, with her going up against that little girl she once cared for like her own daughter. That would definitely make for a very tragic story for Claire and Sherry alike. With Wesker dead and Chris possibly dying, making the series’ lose that classic Chris vs. Wesker rivalry, maybe it’s time to pave the way for Claire vs. Sherry…

One thing’s for sure: We definitely won’t be seeing Leon being such a monster and just leaving Sherry on the floor like this. Never again. 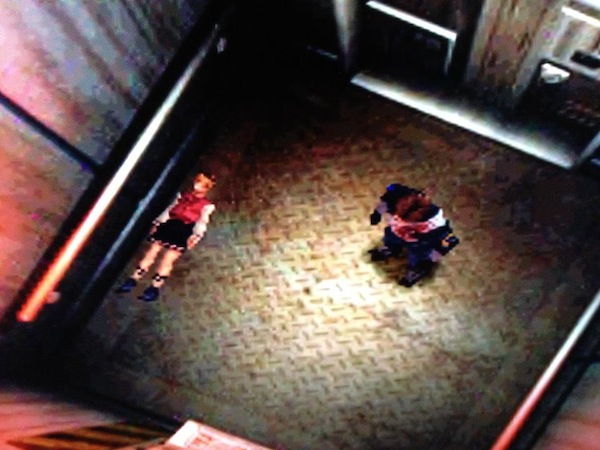 So there you have it. Yes, I think Sherry may end up becoming the series’ next big antagonist, filling in the spot left vacant by Wesker. One day we may see Alex Wesker’s big debut, but for now, I think Sherry will be the new villain. Yeah, I know that sounds super crazy, but it’s a theory that’s been in my head for a while, and I’m sticking with it.

What do you guys think? How would you feel if Sherry did end up going bad? Or would you rather see Jake take up his father’s mantle? Sound off in the comments below!