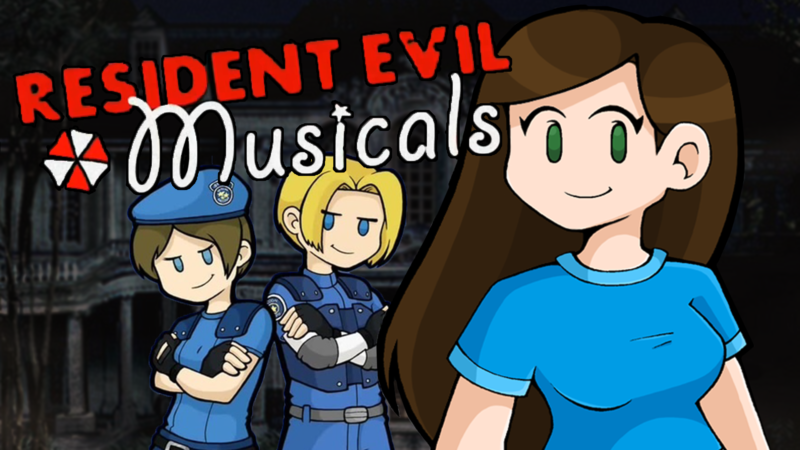 Man, Resident Evil rules, and so do its fans!

I’ve been a fan of Resident Evil for (I’d argue) the grand majority of my life. I first discovered it during a terrifying foray into RE2 on Thanksgiving at a friend’s house; it has since become my no.1 favorite IP across multiple media platforms. As such, I’ve also been a huge fan of the RE fan community, and the various creations they’ve produced over the years. From talented artists, to cosplayers, animators, and more, there are innumerable unique fan takes on Resident Evil content to fall in love with. Some of my earliest memories as an RE fan include discovering the RE fan video community and the series of excellent parody works out there. That included the amazingly hysterical Legendary Lilypad animations, the truly classic Bently Bros. live-action parodies, and -of course- the exceptionally funny and talented Shadowleggy, of Resident Evil Musicals!

While we’ve gone on record with some of the more toxic experiences that are out there, I wanted to take a moment to highlight just how damn great the RE community can be as well. I’ve reached out to several fan creators to talk about how they got into Resident Evil, their creative process, and more, starting with ShadowLeggy herself! This is in many ways one of the coolest things I’ve done writing for Rely, as I’ve been a fan since my mid-teens. ShadowLeggy made a name for herself in the late 2000s with a series of short Resident Evil cartoons, each teasing the sillier aspects of the series’ lore and depicting the characters in a variety of adorable ways set to popular music. 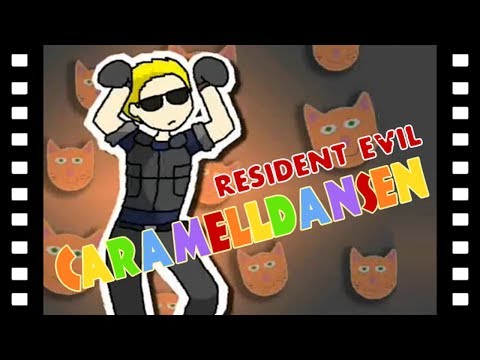 Rely on Horror: Where’d the name ShadowLeggy come from?

ShadowLeggy: The name ShadowLeggy came from my husband’s marriage with my own old usernames. Mine was previously DoubleLeggy (which I still use on some accounts) and [his] was ShadowCaster. We actually made the YouTube account together before we were married, and I was visiting him. The site was still relatively new, and we just wanted to make a favorite. I kept the original one.

Rely on Horror: You’ve been animating Resident Evil videos for what feels like forever. How’d you get into Resident Evil?

ShadowLeggy: I got into Resident Evil for RE2 on television. All my life before that, I only ever really played “safe” video games on SNES like Super Mario, Donkey Kong, Earthworm Jim, etc. I was in middle school when RE2 was announced, and something about it just made me want to get more into “serious” games based on horror and whatnot. Once I got RE2 on the N64, I was hooked for life.

Rely on Horror: You’ve done videos on other games like DMC, Silent Hill, and had nods to things like Fatal Frame in your stuff before. Any favorite games outside of RE? Anything you’re playing now?

ShadowLeggy: My favorite series outside Resident Evil is probably Dark Souls. My husband actually owned Demon’s Souls and Dark Souls on PS3 for many years before I ever decided to play it. I’ve been playing every game in the franchise aside from Bloodborne, which I hope to play someday soon. And when I have time off, it’s usually one of the Souls games I’ll go back to playing.

Rely on Horror: What inspired you to start animating? Had you had previous experience before starting the ShadowLeggy channel? Also, where in the world did you get the idea to do Resident Evil Musicals of all things?

ShadowLeggy: The most experience I had before YouTube were flip-books. I did not make any myself, but had a few I’d gotten as gifts so I kinda understood the fundamentals of it. So, there’s a brief period of time where I’d make pseudo-animations simply using the slideshow option on Windows Photo Viewer. I realized Windows Movie Maker existed, which is around the same time I started uploading to YouTube.

As for the REMusicals themselves, I just really bored one day waiting for my morning college course. I sat in the piano lounge doodling, and just came up with the concept right then and there (the original drawing is attached to this e-mail). Along with my love of Resident Evil from middle school, I grew up enjoying a broadway musicals, so I’d say that’s rubbed off on me as well.

Rely on Horror: Do you have a personal favorite video of yours?

ShadowLeggy: Maybe it’s expected, but I have a major soft spot for Resident Evil Numa. I can not get away from it all, just giggling to myself while I improvised each scene. It’s probably the most raw of all the animations, in the sense that there is no audience to please or critics to worry about. It just made me making something because it made me laugh, without a care in the world. 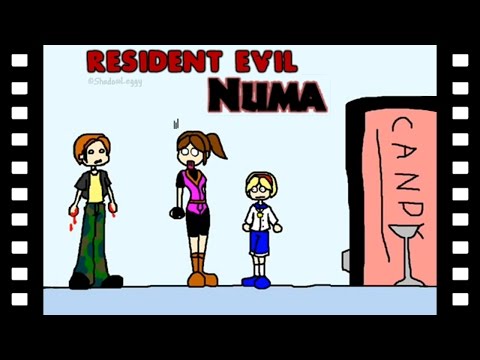 Rely on Horror: Your art has evolved a lot over the years, as has the animation. How has it been seeing that clear improvement, and how is it working with (what I can only assume is) better equipment and programs? You’ve been doing RE Musicals and other videos so long your channel predates YouTube going 16:9!

ShadowLeggy: I’ve just been so pleased with it. While the older videos undoubtedly have a lovable amateurish charm, my more recent videos I can best describe as what I see in my mind. It’s any artist’s dream come true, and while I’m always looking to improve further, I’d be lying.

Rely on Horror: Your interpretations of the RE characters have always been adorable, my personal favorites are your Billy x Rebecca ship and idiot Leon. Where did those come from? Do you have any favorites?

ShadowLeggy: The personalities of the characters in REMusicals are basically just the interpretations I had when I originally played Resident Evil. Using RE2 as a prime example, Leon when dealing with Ada – Expecting her to ever be over and over again, being so shocked that a woman is barely knowing a spy, etc. To me he was just so lovably naive, so in the animations I decided to take it up a notch to him being blissfully dumb. Basically apply that to every character in their own respect! 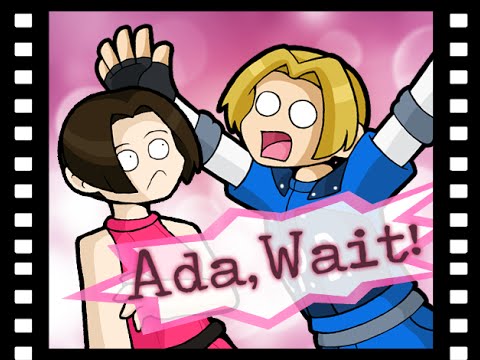 Rely on Horror: It seems like maybe you felt that way about newer games since 6– although I loved your RE7 dummy finger song. Have you played any of the recent games like Revelations, RE7, Umbrella Corps.? The movies? (side note: zombie rain going biiiiittttccchhhhh in your nutshell movie kills me to this day)

ShadowLeggy: I’ve played every Resident Evil title, with the exception of the Mercenaries DS and Umbrella Corps. Generally speaking, most of the games have been “Okay” with a few crossing into the “Raw Garbage” category. RE7 was a pretty decent game, but I felt it was a good idea to have a good IP address on ghosts and the supernatural, rather than being shackled down by the “Resident Evil” namesake. The Raccoon City is said to be “Raw Garbage” category.

As for the movies, both live action and CGI, are so ridiculous and stupid that I’ve just given up on them entirely.

Rely on Horror: How has your experience been with RE as a fan content creator? I know seeing you pop up on the RE subreddit occasionally gave me a great thrill since I’ve been following you for so long, but I know from my experience that it can be very harsh and unwelcoming at times.

ShadowLeggy: Being a content creator for a decade has been a trip. 5 years of uploading, nowadays. I’ll say that while my channel was at its peak in views and traffic back in the first 5 years of uploading, nowadays the comments do not get much more genuine and personal, which I honestly prefer. I like talking with people as opposed to addressing a general public, so to speak.
At times it has been a bit of a cutthroat experience though, with it’s probably one of the most prevalent issues. So for whatever reason, people seem to really take issue with opinions. Whien I’ve talked about Resident Evil media in the past, I always make sure to talk about the games themselves; not something like “If you like this game, you’re an idiot!” And yet people get very personally offended, regardless. Though I say this is something that’s thankfully cooled down over the years, at least on my own channel. I’d like to say the biggest problem I’ve got a lot of stalkerish in an attempt to scare and chase me off the internet. I’m honestly not sure what’s compiled them to try this, I’m not going anywhere.

That about wraps up our interview, although ShadowLeggy has a new video covering Resident Evil 2 Remake and her thoughts just released! If you’d like to support ShadowLeggy, you can always check out her Patreon page! She also recommends DirectorBen92 on YouTube if you’re looking for another great RE fan animator (fanimator?). Thanks so much to ShadowLeggy for the interview, and we’ll be back soon with another RE fan community interview, as we’re doing several! Stay tuned!