Preview: Tomb Raider is all about survival

The Tomb Raider franchise has been faced with a lot of struggles recently and it wasn’t until last year when Crystal Dynamics released Lara Croft and the Guardian of Light for PSN and XBLA that the series was once again met with a healthy amount of critical acclaim across the board. What’s interesting, though, is that said downloadable game wasn’t exactly your traditional Tomb Raider experience upon a first glance. Putting its top-down shooter style aside fans found that the essence of the series was still intact, albeit in a new perspective. Now, Crystal Dynamics is going back to a more traditional delivery with the upcoming prequel simply titled Tomb Raider.

Scheduled to hit the Playstation 3 and Xbox 360 in 2012, Tomb Raider aims to tell Lara’s first adventure which went on to form the heroine we all know and love today. Lara in this new game isn’t as “invincible” as she may seem in more recent entries in the series, here she’s heavily grounded in reality thus making her a much more relate-able character. It’s also worth stating how the developers are really aiming to make survival the focal point in this new adventure. Which is something the demo that was presented to us strongly invoked. 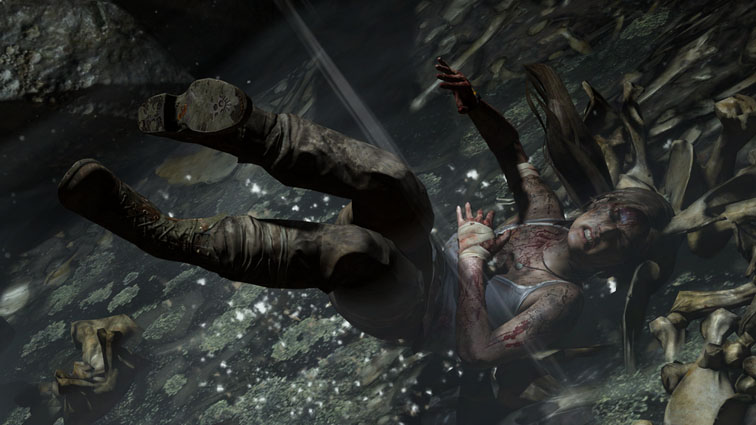 The presentation began with the demo that was played at Microsoft’s press conference. But watching it a second time I found some very notable aspects. And right from the beginning of the demo we find quite a metaphor: Lara starts Day 2 of her trip-gone-to-hell stuck in a cocoon-like enclosure. What’s symbolic about this is quite simply the idea of a cocoon and what that in itself represents: rebirth. So, what does that have to do with Lara and why is it even worth noting?

Well, this game is, as aforementioned, aiming to tell the events that helped formulate Lara into the character we all know and love and it does it by pitting her in a ship wreck off the coast of Japan that quickly goes to hell. She ends up trapped in a mysterious cave on an uncharted island as she awakes in the aforementioned “cocoon”. This beautifully represents her rebirth from a normal college girl to a hardened survivor. And speaking of survival, there’s a lot of that.

While QTE’s are highly criticized at times, in Tomb Raider they’re expertly implemented. Right from the beginning after Lara escapes from the “cocoon” she lands on a sharp object that is translated in an extremely effective way to the player thanks in large part to the QTE that followed which required removing the spike from her body. Lara in this game feels pain and it shows through her animation and her many screams. She may come off to some as being quite fragile but it all goes a long way to make her a much more relatable character. One notable example of this is when one of the game’s quite disturbing enemies comes into the scene and tries to drag Lara from her feet. Her reaction to such a forceful act is how you would normally expect a young girl to react under similar circumstances. 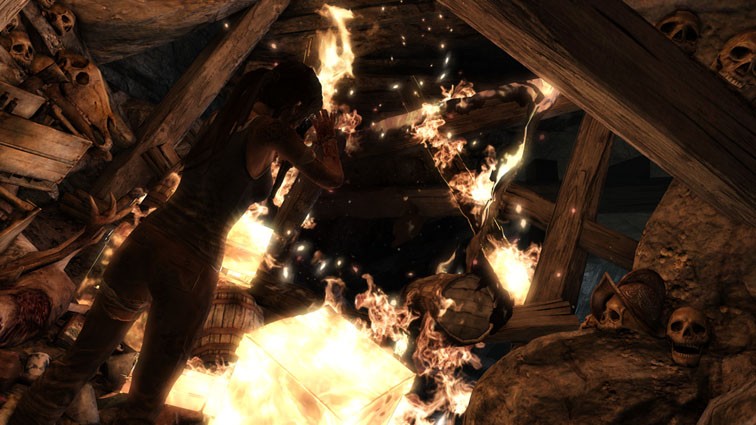 Fire also plays a big role in the game and it proves to be quite vital to Lara’s survival and traversal in the demo we were shown. There’s certain points throughout the level we were shown where you could refill the flame on your torch which is quite important especially taking into account the environmental hazards and puzzles that may require such a substance. One such puzzle came towards the end of the first part of the demo we saw. This then transitioned into a thrilling escape sequence which heavily used QTE’s., where the shoulder buttons controlled Lara’s arms as she desperately tries to crawl her way out of the crumbling cave. After this Lara finally makes it outside of the cave, but, obviously, her adventure is far from over.

We were then shown a second part of the game which focused more on climbing and how Lara would be traversing the very open environments in the game. We were told early on how eventually Lara would be able to reach any part of the environment within the range of the player’s view. Then, after a cut-scene and introduction to a new character, Roth, we were exposed to how Lara is free to explore her surroundings in different ways, albeit some initial restrictions. Taking a Metroid-esque approach, Lara won’t be able to go everywhere right from the very beginning, instead, she’ll only be able to do so after getting the appropriate abilities needed. But still, the basic climbing mechanics, complemented by a very solid physics system, looked really intuitive and fans should have quite a good deal of fun trying to make it to destinations in different ways by climbing.

This part of the presentation also showed off some combat. While on her mission to retrieve supplies that would help her and the injured Roth escape the island Lara runs into wolves. The combat we saw didn’t involve any firearms, instead, we saw Lara utilize a melee weapon to execute the wolf, which was an act she didn’t want to commit but it was necessary for her to survive. It was then stated how Lara in this game isn’t out to kill, but she has to do so in order to survive. 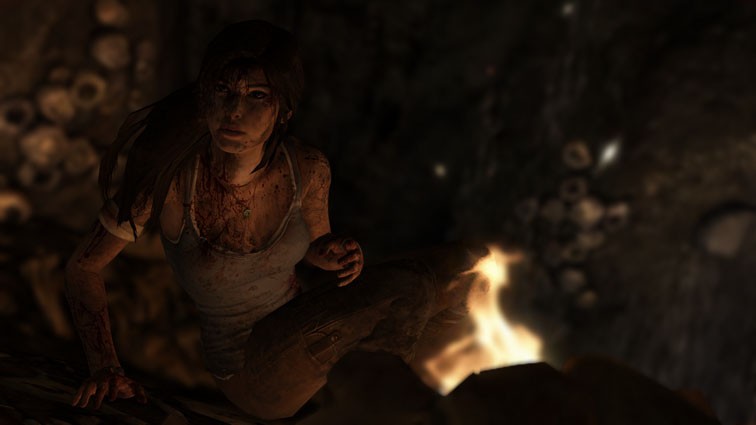 The demo ended with Lara retrieving the necessary supplies at the top of this small village overrun by wolves and then making her way back to the injured Roth who was fortunately still alive. Roth encourages Lara by telling her how she’s a Croft and that she has what it takes to survive this predicament; a claim which Lara argues. Roth then tells her to put out a signal for help to see if anyone would respond. It’s worth mentioning how these cinematics really show off the superb job Crystal Dynamics did with the overall character animations and facial captures. The characters talk in a realistic manner and don’t come off as “wooden”.

Overall, this presentation of Tomb Raider definitely increased our anticipation level for the game. Lara is coming back to consoles in a big way here with a prequel that aims to re-imagine her character by detailing her very first adventure. One which went on to create the heroine we know and love today. The game may still be in development and won’t be hitting until sometime in 2012 but rest assured it’s shaping up to be quite an experience. Time to show Nathan Drake a thing or two, Lara.