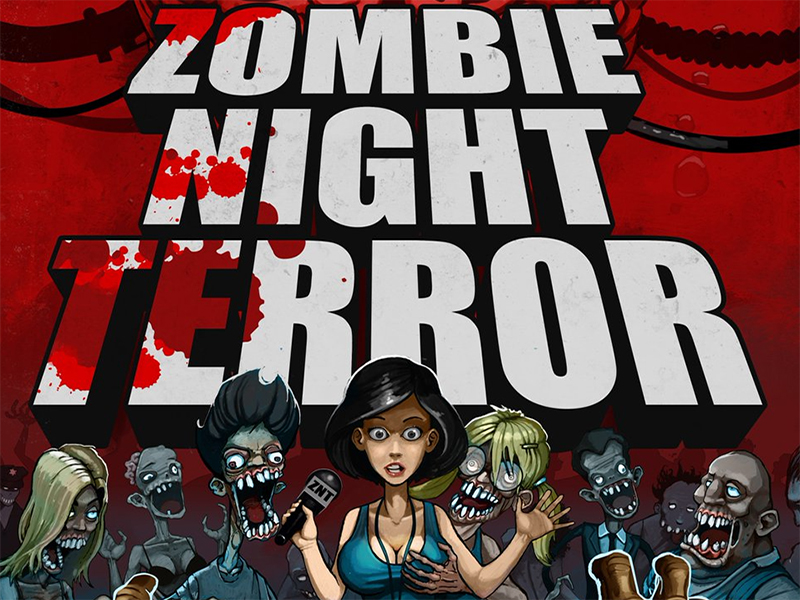 2D pixel-based zombie games are commonplace nowadays, but don’t let the initial appearance and generic title of NoClip’s Zombie Night Terror fool you as it provides a pretty unique experience based on a beloved and familiar puzzle gaming series.

While the pixelated look might invoke premature thoughts of the game being similar to Flash-based zombie offerings on Newgrounds, ZNT is also far more comparable to the Lemmings franchise. Controlling the masses of undead from a dangerous new drug strain dubbed “Romero”, you play as the “bad guys” in ZNT, working their way towards eating every human in sight as well as seeking out the immoral scientist who created the virus.  Each of the game’s 40 levels has a small cutscene that plays with tropes and references to a bunch of other franchises such as The Terminator or IT. While parody and self-deprecation is abound, it’s nothing revolutionary unless you hunger for that time of humor. 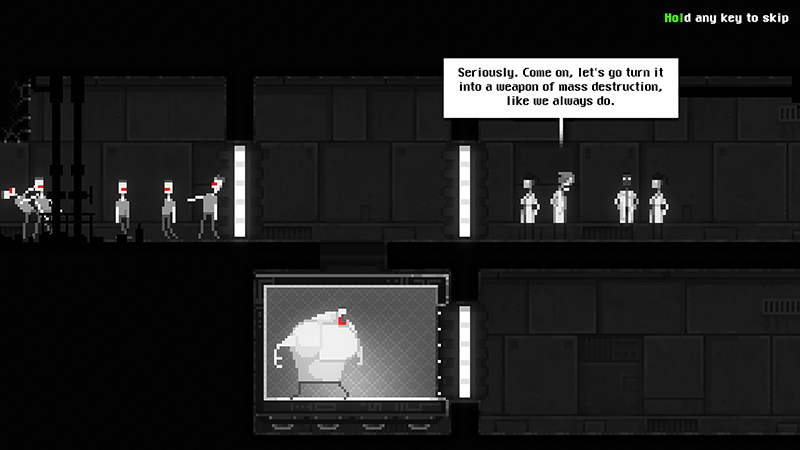 Like the lemmings, all units move automatically in one direction, and you have to use designated “Overlord” units to turn them around, boost them to different platforms, provide speed buffs, etc. You gain abilities to stun, explode, and leap quickly at humans, which counteracts some of the more hostile ones that will fight back. Using these abilities cost a resource that you can recover by killing humans or sacrificing your own units. Tying in the zombie theme, the game has a clever way of giving you more zombies by consuming living NPCs in each level, in which they’ll slowly come back to life after being eaten (albeit with a generic zombie sprite). Each environment starts you off with a small swarm of the undead and your goal is usually to reach a specific area, kill a predetermined amount of characters in a level, fight off a boss, and more. These goals are arranged in special ways to make stages resemble the pacing of games like Donkey Kong or Elevator Action while still using the same strategy/puzzle control scheme provided. The variety makes sure the game stays fresh instead of just looking like it just offers slight alterations to stage layouts like some other puzzle games do.

Most stages are constructed to be played in very fixed methodologies with some optional routes that can make things easier or help you reach optional objectives. While I preferred the more open, “Infect as much as you can” levels, there are a bunch of zones that limit your abilities you can use and the pool of resources you have to mutate zombies or make them perform special actions. With the latter, I feel I have to play each stage in a very strict order of operations with little room for failure versus the playground to experiment I’ve found in the former. Some stages also run on a little long. I would’ve preferred the game served in smaller bite-sized chunk like a mobile title versus losing twenty minutes to a single level because every time I made it one step farther in the Rube-Goldberg machine that some levels are designed as, I would fail again immediately after encountering a new obstacle. A few levels have quick and somewhat cheap “gotcha” moments to screw with the player whether it be a roving car that ensures you can’t speedrun the level with just one zombie or NPCs that are timed to attack you at set intervals. Some players may adapt better to these new situations with warning and even welcome it, but it personally lent itself to being more frustrating than challenging. 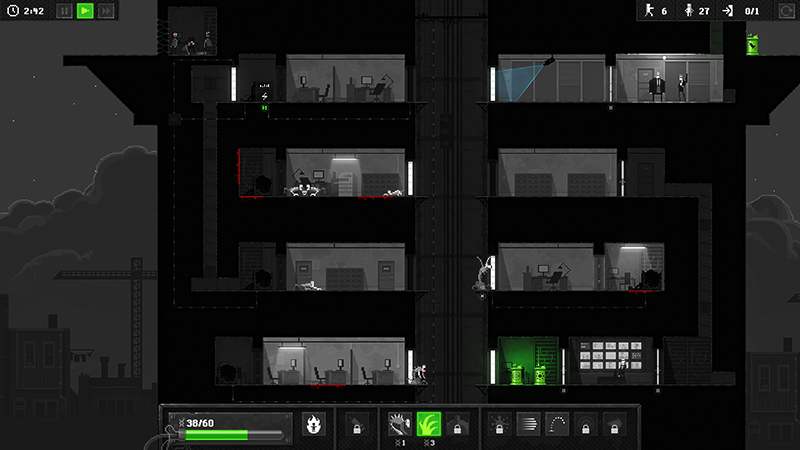 Although there’s no controller support, the keyboard and mouse is still your best tool with a game like this. However, our title isn’t completely fine-tuned and sometimes you’ll be fighting against ZNT itself more than its living NPCs. The game has three speeds: Normal, Paused, and Really Fast with no kind of slider to allow a player to find something they like in between. Performing most actions immediately unpauses the game so you’re regularly slamming on the space key to repause. Since there will be few times you won’t be managing the horde, and considering how large maps can be, you’ll run into a few moments where you’ll lose vital units or the mission outright because of timing issues or too much chaos occurring at once. Some jumps in the game require pixel perfect timing so you can say goodbye to anyone offscreen if you didn’t plan in advance (or die enough times on a stage that it’s all committed to memory.

The game’s visuals, while done before, still look great and a lot of the NPCs are animated pretty humorously despite the simplicity. However, the aesthetics of ZNT are its undoing as well. Overload units stand only a few pixels taller than other units so clicking on them with accuracy may be a problem, and your Hunter-types crawl low to the ground so they can be very easy to lose track of if surrounded by normal zombies. A couple of times, I lost sight of objectives or humans to attack since everything blends into each other. If you’re colorblind, considering the game’s only colors are bright shades of green and red, it may be completely impossible to play. 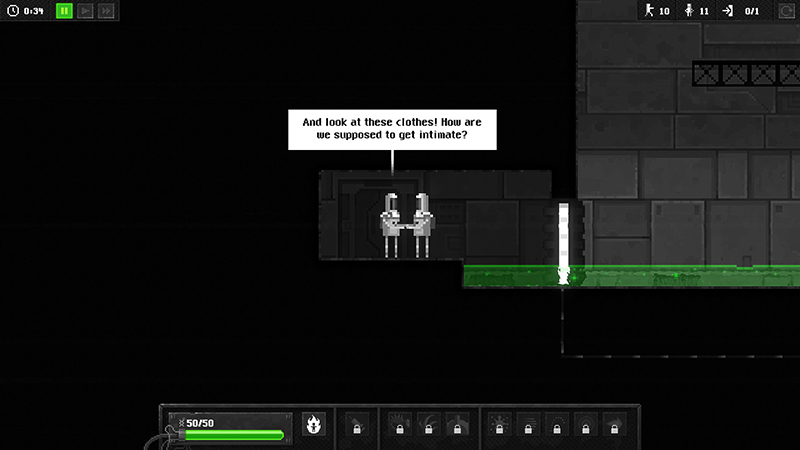 Characters communicate in a “Simmish” speak during cutscenes and the cacophony of noises when things get chaotic during gameplay is both comical and fitting. The soundtrack, while it didn’t stick out, provided a vast array of tracks to fit each zone’s atmosphere and pacing. When I needed to sprint through a stage, the tempo was high and the instruments were loud. When I could afford to take my time, the score was like the looming dread found in other horror games and films.

While I wish the game was at least polished to a T, during the five hours I’ve put into ZNT, I’ve had my fair share of bugs or inconsistencies. The game crashed once right in the middle of a stage, and another time, I didn’t have the ability to pause into the menu. Humans sometimes feel like they get unfair attacks on you, and likewise, the zombies have got caught midjump with no way to get them unstuck since intentionally killing them can only happen when they’re in a neutral state. When you jump in the game, it doesn’t account for ceilings or momentum so I’ve been in situations where I’ve missed critical leaps  or I accidentally made flung zombies die from falling distances that I had no way of anticipating as lethal. 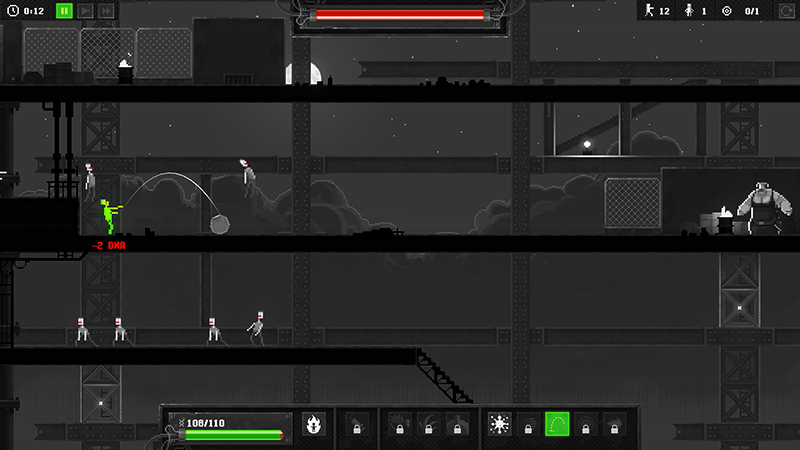 I have complicated thoughts about this title as I can see the joy from beating a stage on the first try or the sense of achievement from barely scraping by. But what’s stopping this zombie game dead in its tracks are mini frustrations that could be tweaked throughout the game in both level and mechanical design. The game has been both fun and funny, and with a level/campaign editor coming in the future, fans can look towards shambling across this virtual world eternally. But as it is, Zombie Night Terror is only pulsing with life in promise and not in execution. But, at a very well priced $13, folks looking for a creative spin on Lemmings will get more than a mouthful for their money, it just won’t necessarily be a clean one.