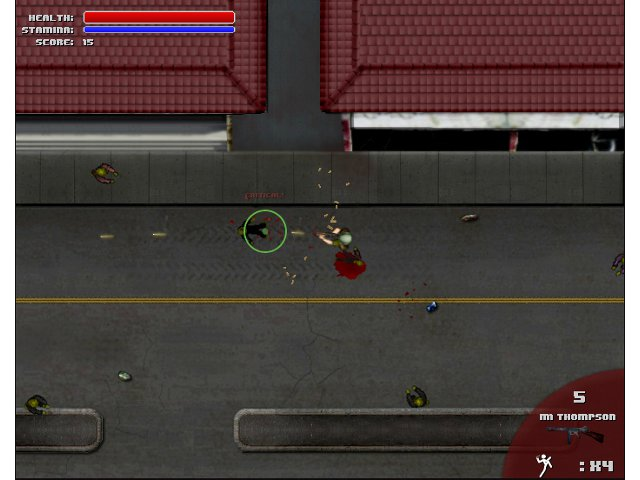 I wasn’t always the person that I am today. In fact, it was not long ago that my life drastically changed for the better. Nowadays I have over ten gaming systems, more than 200 physical copies of games, a powerful laptop and some rare collector’s items too, but just six years ago I was still limited to my Nintendo Gamecube. I was twelve when my Windows 2000 computer finally received an internet connection and like Aladdin’s monkey in the Cave of Wonders, the riches of the internet were too great for me to resist. I played Flash games. I played A LOT of Flash games. Eventually this phase in my gaming-career ended when I turned fourteen and discovered World of Warcraft, but today I decided to revisit that time when I wasn’t as fortunate as I am now.

Today we are looking at Zombie Madness, a Flash game available on Kongregate.com. The goal of the game is very simple: You are a lone soldier in the middle of the zombie-apocalypse, your only friends are whatever weapons and skills you happen pick and you are tasked with survival. Using the mouse you can shoot and target, placing the crosshair over a zombie’s head results in a critical hit. Using the Q-button you can switch between two weapons, E has you do your special ability and SPACE is used for punching a zombie in the face. There are a total of 45 increasingly difficult waves, but in between these you can purchase items and assign accumulated points to your basic skills (speed, armor, luck and the likes).

What sets this seemingly basic game apart from most other Flash titles that I just happen to remember is the amount of tactical freedom given to you. You can carry two weapons (varying from pistols to a BFG), a special skill and three perks, this allows you to forge and continually expand upon a play-style that suits you. I went with a powerful and accurate pistol-user for a while, but as the hordes grew thicker I turned to a machine gun and BFG instead. Throughout my entire run through the game I never once felt like I was just grinding to the end, even on the easiest setting there was always a degree of challenge and I had to adapt to situations on the fly. The pacing is also downright excellent: special bonus rounds keep the game from going stale, but the challenge in the later levels makes sure that you don’t finish the game too fast either. 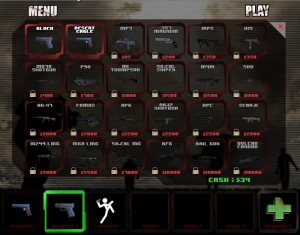 Doing some shopping, that magnum is looking real’ good.

Now there is certainly some decent criticism you could raise against this game, as it is certainly still rough around the edges. There is a bit of a balancing problem that is pretty hard to overlook, I for example thought it was very weird that the cheapest perk available instant-kills any zombie that touches you. There is also the obvious visual problem that comes with Flash games, but despite this game’s humble origins, I still feel that the lack of color (or “realistic” as some would call it) is not the most pleasant to look at for long amounts of time (say… the amount of time it takes to complete 45 levels). The concept has also been done before loads of time and all Zombie Madness has to add is a rather solid take on RPG-elements in non-RPG genres.

To summarize my verdict: Zombie Madness is not particularly standing out in neither the horror or Flash genre, but if time needs to be killed ,then it’s most certainly worth a shot. The game is free to play right here, so give it a try once, it won’t cost you any money. I’ll be back to my regular kind of reviews soon (read: once I got over the financial backlash that comes with buying a new WiiU) and I hope to see you all back then as well!